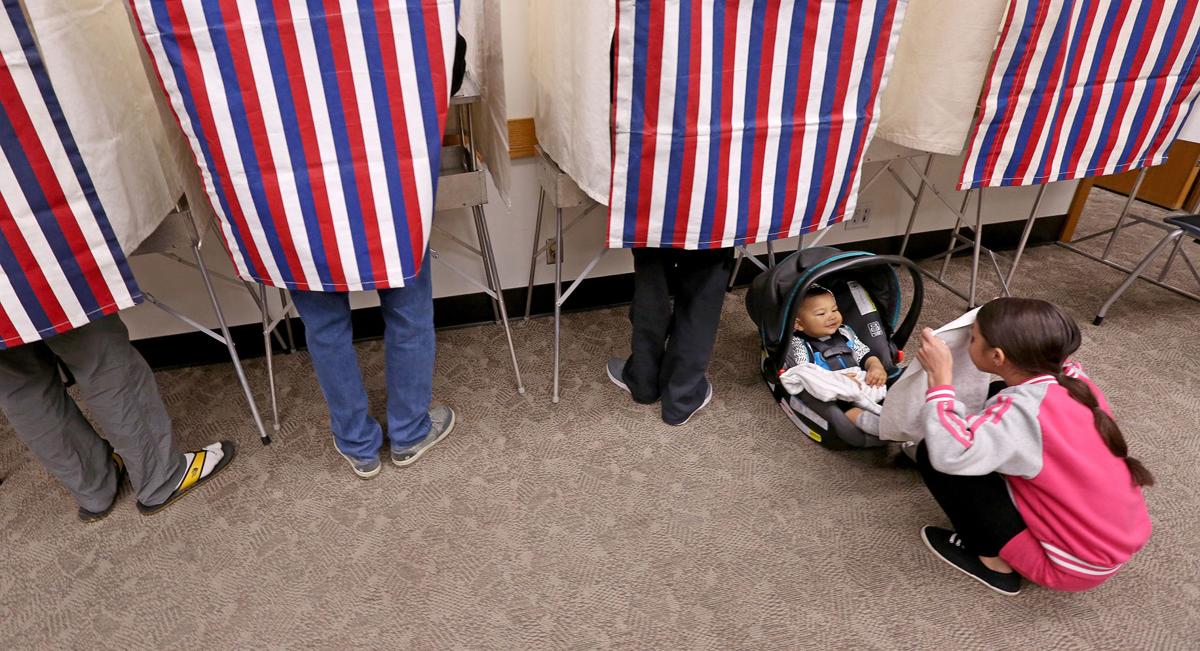 Ocean Davis, 9, keeps her one-year old brother LeVian Turner entertained with a game of "Peek-A-Boo" while their mother Essence Turner casts her ballot at the Precinct #3 polling station at the Noel Wien Public Library on election day Tuesday evening, October 1, 2019. 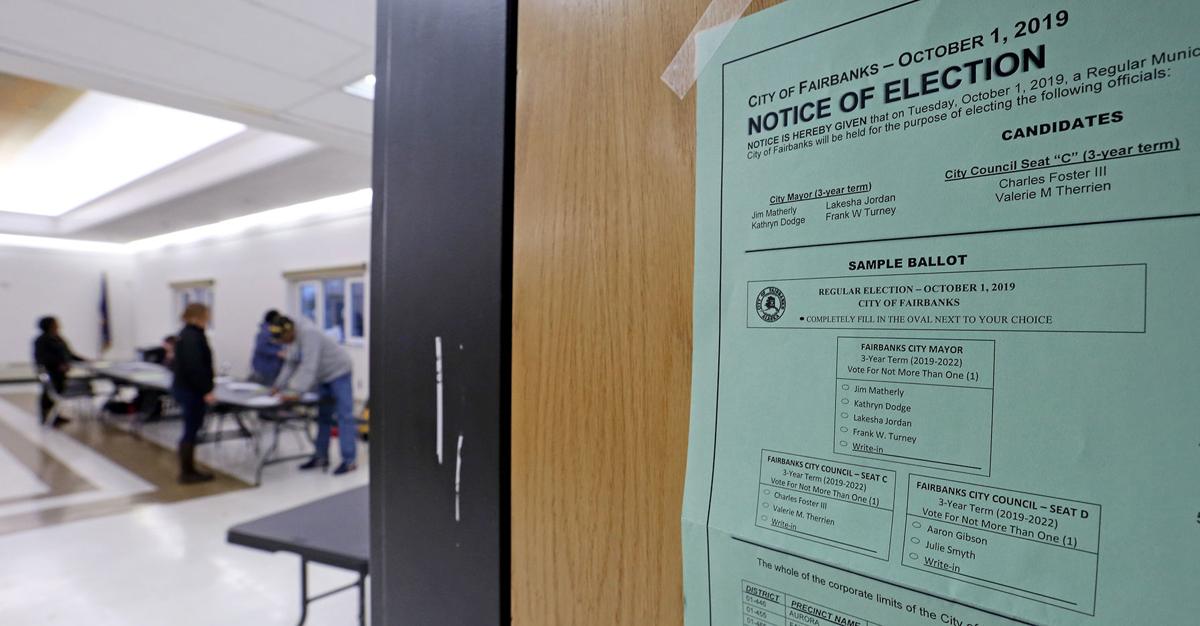 A City of Fairbanks sample ballot hangs on the entryway door as voters cast their ballots at the Precinct #7 polling station at the JP Jones Community Development Center on election day Tuesday evening, October 1, 2019.

Ocean Davis, 9, keeps her one-year old brother LeVian Turner entertained with a game of "Peek-A-Boo" while their mother Essence Turner casts her ballot at the Precinct #3 polling station at the Noel Wien Public Library on election day Tuesday evening, October 1, 2019.

A City of Fairbanks sample ballot hangs on the entryway door as voters cast their ballots at the Precinct #7 polling station at the JP Jones Community Development Center on election day Tuesday evening, October 1, 2019.

Here’s what voters had to say about the city of Fairbanks mayor's race at three polling locations across Fairbanks on Tuesday. Of those informally interviewed as they left polling places, six people voted for Kathryn Dodge, one voted for Lakesha Jordan, five voted for incumbent Jim Matherly and one voted for Frank Turney.

Both Ellucia and Rob Boswell voted for Matherly. The couple grew up in Fairbanks and consider Matherly fair and honest.

“He loves Fairbanks, and that kind of shines,” Ellucia Boswell said.

Both are retired — Rob was an electrical engineer and Ellucia worked at Municipal Utilities System.

Both Alicia Ginnaty and Aaron Brown voted for Dodge. Ginnaty was born and raised in Fairbanks and works in a doctor’s office. The couple has children, so education is an important issue to them and is the reason they support Dodge.

Additionally, Brown, a stay-at-home father who has lived in Fairbanks for about nine years, said he liked that Dodge came to visit them at their home.

“But I also support a lot of her views," he said.

Brenda Carey, who has lived in Fairbanks for six years and works as a cook at the Fairbanks Native Association Elders Program, cast her vote for Jordan. She said Jordan was more down-to-earth than most of the candidates.

Mike Russo, who has lived in Fairbanks about 36 years and who works as a surveillance monitor for Department of Corrections, voted for Matherly in both this election and three years ago.

“I’ve known Jim for almost 40 years, and he seems like a pretty straight-shooter,” he said.

Russo went on to say he felt that Matherly didn’t “take sides,” that he’d done a good job as mayor, and that he was easy to talk to. He felt that being a politician was particularly hard in 2019 but that Matherly was “well-rounded for the position.”

Leda Dodds voted for Dodge, she said, because “She seems fairer than the guy that’s up there now.”

She didn’t like Matherly’s actions regarding Ordinance 6093, an equal-rights ordinance pertaining to the LGBT community, because she felt he was inconsistent and influenced by religious groups.

“I believe, too, in Jesus,” she said, “But there’s got to be a line between our government and that.”

Both Leda Dodds and her husband are now retired. Dodds was formerly a housewife.

“He seems to have been more involved than some of the other ones since we’ve moved back,” he said, “Seems like he’s more involved in the community and emergency services.”

Bryant moved to Fairbanks in March, but lived both here and in North Pole off and on for several years.

“I feel like she’s just fighting for what I believe [in], genuinely,” he said.

Protecting his land and the Arctic National Wildlife Refuge were issues close to his heart. Potts works at Northern Laundry Services as a delivery driver and has lived in Fairbanks for about six years.

Patrick Woolery voted for Dodge because he said he had “heard more good things about her” than other candidates, some of whom he said he had heard very little about at all.

Tony and Jessica Del Rosario both voted for Matherly because he is, they said, pro-life and “pro-freedom.” Tony is a police officer and Jessica works for a helicopter company. She was born and raised in Fairbanks and he has been in town for close to 20 years.

Sean Randle, who has lived in Fairbanks since 1984 and works as a pipefitter, voted for Turney. He said he didn’t care for Dodge’s beliefs and simply didn’t like Matherly but felt that Turney was “an interesting fellow.”

Natasha Singh is an attorney who has lived in Fairbanks for most of her life, except for the time she spent earning her degrees. She voted for Dodge because, “I believe she’s going to listen to Fairbanksans, all Fairbanksans’ opinions when she makes her decisions."

Further, she said that Alaska Natives in the city were looking for “equity in terms of how public safety is provided” and that Dodge was open to suggestions about how to handle that issue. Singh was also concerned about city employees earning a fair wage.

Contract Cheryl Upshaw at 459-7572 or find her on Twitter @FDNMcity.