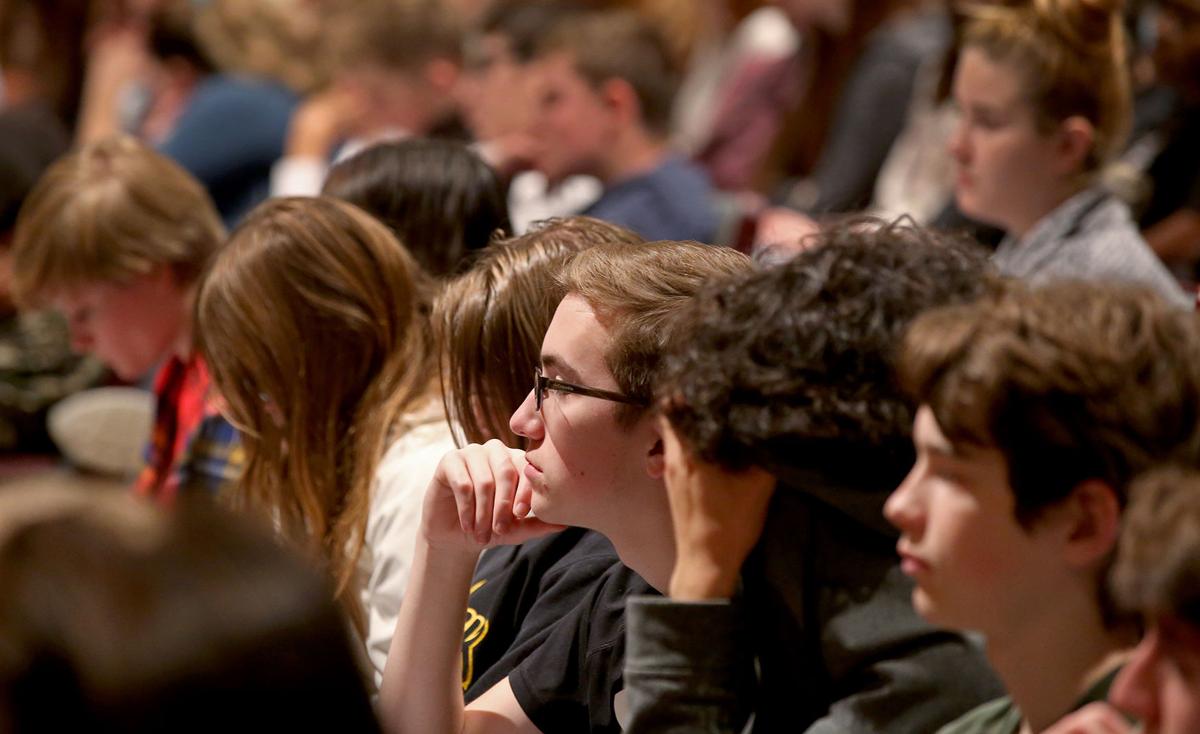 The Alaska Supreme Court visited West Valley High School on Thursday morning to give students a chance to understand and learn more about the justice system.

As part of the Supreme Court LIVE program, students were able to hear oral arguments in the case of Kaleb Lee Basey v. State of Alaska, Department of Public Safety. The case was about whether Basey could access the disciplinary and training certification files of two Alaska State Troopers who were involved in a criminal investigation that led to his arrest.

Lawyers were present to argue the case, with time afterward for students to ask questions of the attorneys and the justices.

“It is our duty as citizens to hold people accountable,” said attorney John McKay, who doesn’t represent Basey but argued on his behalf, “and to hold the agencies that operate, the law enforcement agencies, accountable, to monitor what they do to ensure that there aren’t abuses of this tremendous trust that we put in them.”

Justice Craig Stowers said that the state is arguing that Alaska Statute 39.25.080 states that personnel records of state employees, including employment applications and examinations, are confidential, with seven exceptions. Stowers said he is curious to know how the records discussed in this case qualify for an exception.

McKay argued that “personnel records” are not defined by the statute and that the court would have to decide what that means, as well as define “disciplinary records.”

Susan Orlansky, who also argued on behalf of Basey, said the court could use this case as a “vehicle” to set standards for future cases. She gave several hypotheticals to illustrate when it may be in the public’s interest to have access to such documents.

Orlansky also quoted the court’s 1990 ruling in Jones v. Jennings, which justified the disclosure of documents on the basis of “preserving democratic values and fostering the public’s trust in those charged with enforcing the law.”

“In my own words, I’d say that the compelling state interest in the disclosure of law enforcement’s disciplinary records involving work-related misconduct is (that) public trust in law enforcement requires transparency,” she said, adding that means the public needs to be able to learn the types of complaints leveled and how agencies handle them.

Assistant Attorney General Kimber Rodgers argued that records of troopers should not be disclosed as part of a public records request. She said even acknowledging a disciplinary record exists or not implicates privacy concerns.

“It could be deeply embarrassing for any state employee, including troopers, if the members of the public knew they even had a disciplinary record,” she said.

Further, she said, making such records public could lead to an employee being harassed or influence people to hide mistakes rather than have them be publicly viewable. She said the Division of Personnel has historically kept disciplinary records private, considering them personnel records.

Stowers, drawing on one of Orlansky’s hypotheticals, asked about a situation in which a state employee is repeatedly accused of sexual harassment and what the agency did after receiving the complaints.

“At what point can either the press, on behalf of the public, or that employee who feels threatened, get access to the relevant information to answer the questions whether or not the agency is doing its job or not?” Stowers asked.

Rodgers maintained there’s not an ability, through the public records request, to obtain access to disciplinary records. But she said a person could pursue a lawsuit.

Rodgers concluded by citing the constitutional right to privacy.

“Alaska’s public access to records is statutory, not constitutional, and so I think, in Alaska at least, the constitutional right to privacy should trump the statutory right to access public records,” she said.

With the arguments completed, students had time to ask questions.

Students asked attorneys how they would feel if put in Basey’s shoes and requested the records of other people; asked them to elaborate on some of the cases they cited, and discussed concerns over disciplinary files being released.

Of the judges, they asked about bias and whether they knew they wanted to end up on the Supreme Court when they were in high school.

“How does your life change from being a citizen to being appointed to the Supreme Court?” one student asked.

“The change is really radical,” Stowers said. “I know, as just a normal person, I can talk to people about my ideas, my concerns about politics, life, you name it. When you become a judge, it can be very isolating, because there are things you can’t talk about publicly.”

Justice Daniel Winfree gave a personal example of what Stowers mentioned, noting that he grew up in Fairbanks and was involved in the community when he was in private practice. He said he swore when he became a judge he would not become isolated, but he was wrong.

“It just happens because, for one thing, we’re very busy. I spend a lot more time with this job than I did when I was in private practice, but there are times when you just don’t think you should be out,” he said.

All the judges who spoke on the topic ultimately noted, however, that the job was worth it.