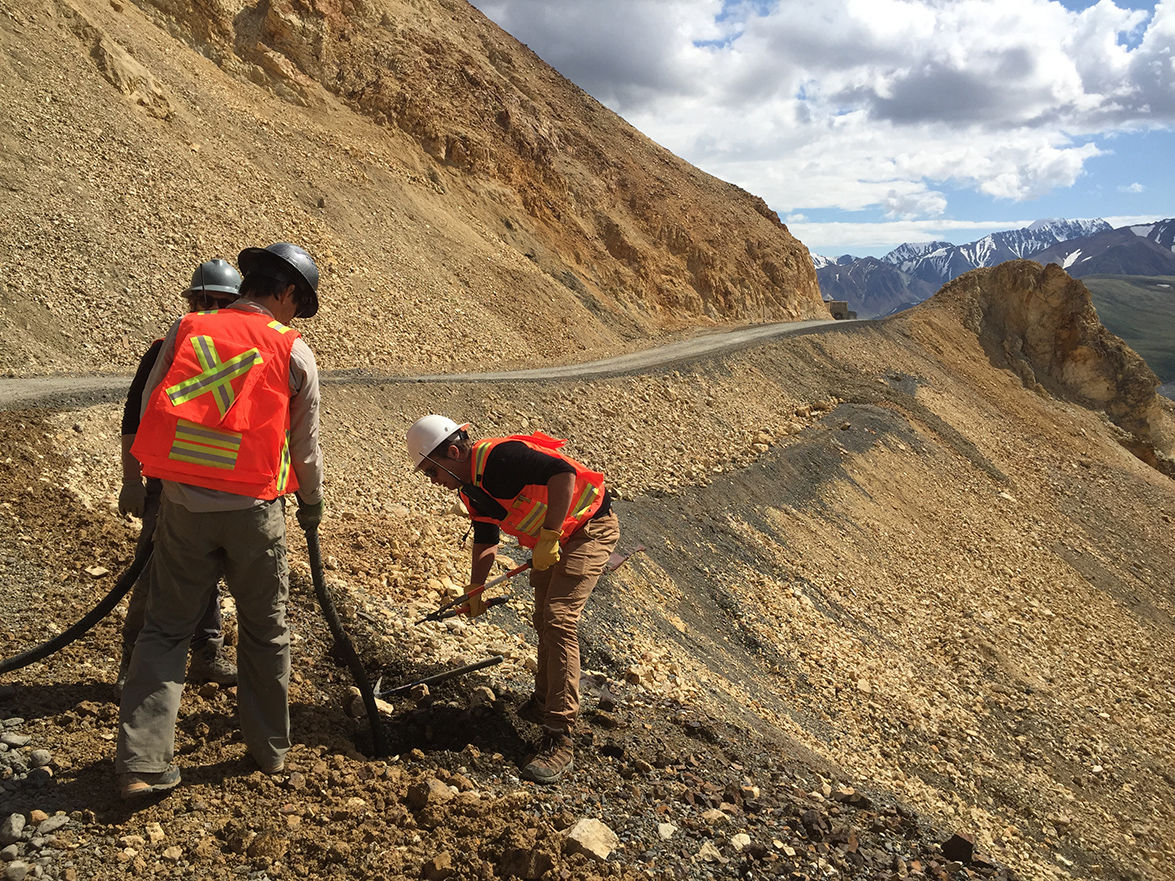 Park geologists remove old monitoring equipment that was sheared and made inoperable by the Pretty Rocks landslide. Kris Capps/News-Miner 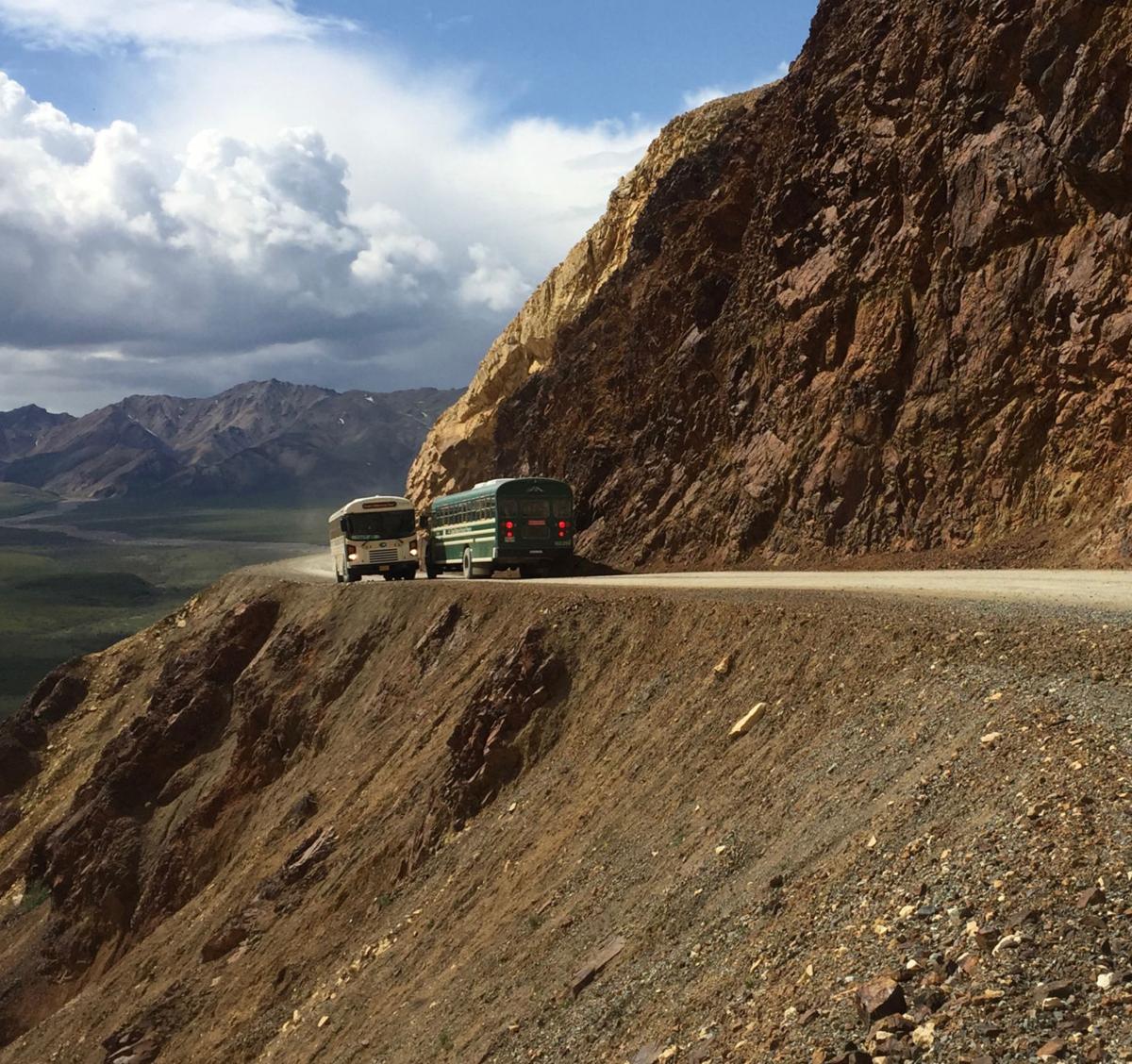 DENALI NATIONAL PARK — Picture a 300-foot-long bridge over an active landslide area on the precarious park road at Polychrome Pass. This is, so far, the best long-term option for safely continuing traffic through that area.

The escalating landslide, at Mile 45.4 of the park road, is called Pretty Rocks, and it has been on the park’s radar for a long time, easily managed in years past.

Pretty Rocks is moving rapidly and has become a top priority for park geologist Denny Capps and his crew, with the help of geologists and engineers from all across the state.

Of the more than 140 unstable slopes along the 92-mile park road, Pretty Rocks now has the most potential to cause problems. It could disrupt driving on the park road, has already caused damage to the road, could curtail commercial services to Kantishna at the far end of the park road and, most importantly, might affect public safety.

“This is scary stuff,” said Capps (no relation to Kris Capps). “From 1970 to 1999, we are looking at an 11-degree Fahrenheit temperature increase for our area. Eleven degrees is like going from a glacial period to an interglacial period. It’s not a trivial change.”

He provided an update at the recent annual meeting of the Denali Citizens Council, in the Denali area. Capps described the past five years as “alarmingly warm.” Areas along the park road have “rotten rocks, steep slopes and precarious permafrost,” he said.

That means the permafrost is thawing. And with landslides come other hazards, such as rockfall and large debris flows that can block the road. Currently, both those hazards exist at Pretty Rocks. It is also clear that heavy rain has triggered some debris flow there as well.

Here’s how fast the mountain material is shifting: In 2004, that area moved about 2 feet per year; in 2014, movement increased substantially. By spring 2018, that section of mountain was moving 6-9 inches per month during the winter.

When spring road crews discovered the road had dropped by about 12 feet over the winter of 2018-19, they had to rebuild the road in a new spot, higher on the mountain.

The park immediately did some borehole monitoring to see what lay beneath the mountain material. What did they find?

“All ice,” Capps said, displaying a photograph of the solid ice sample recovered from a borehole drilling.

“You don’t think about permafrost being south facing,” Capps said.

“It’s a rock face, it really heats up in the summer.”

There is no protective vegetation to shield it from solar heat. So mountain material is sliding more and more.

“There’s no doubt about how much movement we have going on out there,” said Capps. “It’s 12 feet of movement per year, horizontally and vertically. That’s 0.4 inches per day.”

He showed slides of the mountainside, filled with rotten rock.

“This is bedrock,” he said. “When it’s wet, I can push my finger through it. It’s that soft. That’s the foundation of our road.”

His main concern is safety of not only visitors and bus drivers, but also equipment operators who “in some cases spend weeks below the hazardous areas. “They are exposed to the hazard the most,” Capps said.

His second concern is keeping the road open. That section of the road in particular is checked every morning before buses are allowed to drive through.

The park also has a new monitoring plan. Its previous equipment was destroyed in last winter’s slides. Thirty tiny prisms will now be sprinkled throughout the landslide area. A camera set in the distance, outside the slide area, scans those prisms every five to 10 minutes.

“We can see movement occurring,” Capps said. “Hopefully they will keep us updated in near real time.”

His crew has also installed a time-lapse camera.

Everything they are doing lays new groundwork for what they hope will become a solution.

“There isn’t a manual for this kind of thing anywhere,” Capps said. “We are in uncharted territory. This is a serious problem. We are coming up with potential fixes, short and long term.”