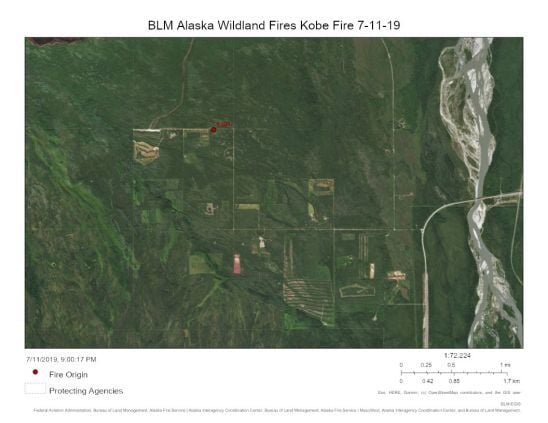 Map shows the location of Thursday's Kobe Fire, about 10 miles south of Anderson on the west side of the Nenana River. Courtesy Alaska Division of Forestry 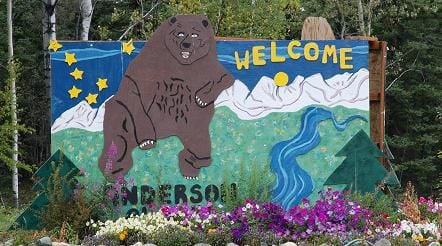 Map shows the location of Thursday's Kobe Fire, about 10 miles south of Anderson on the west side of the Nenana River. Courtesy Alaska Division of Forestry

The wildfire threatening the city of Anderson is being closely monitored Friday and evacuation levels remain the same.

The Kobe Ag and Anderson subdivisions are still under a Level 3 “Go” evacuation. The city of Anderson remains at a Level 2 “Get Set” status.

The blaze grew quickly Thursday night, growing to 600 acres. On Friday morning, that estimate was revised to 1,200 acres. It was raining lightly in the fire area on Friday morning. Fire behavior was described as creeping and smoldering.

The cause of the blaze is not known. Firefighters worked to keep the fire from crossing the Nenana River. Late Thursday night, multiple engines arrived from the Shovel Creek fire in Fairbanks, and additional firefighting resources have been reassigned from the Montana Creek and Malaspina fires.

Evacuation shelters are open at Nenana school, established by the Red Cross and local volunteers, and at Tri-Valley School in Healy, managed by local Healy volunteers. As of 3 a.m. Friday, two individuals used the Nenana Shelter. Both shelters offer cots, blankets, and space to accommodate pets. The Nenana shelter has been closed, but the Healy shelter will remain open until it is no longer needed, according to a morning update from the Denali Borough.

Community members in the Denali Borough have offered their homes, churches, food, and any other help that might be needed.

“Rest assured that firefighters responding to the Kobe Fire are well taken care of,” said a morning update from the Denali Borough. “Additional support resources are available to them including restroom and shower facilities, and food options including hot meals, bagged lunches and snacks.”

The best way people can help is with financial donations to local non-profits who are preparing to help residents who may need to evacuate. Better yet, become a volunteer and support fire and emergency medical responders.

A 50- to 100-acre fire that grew to 600 acres in just a few hours, has caused the mandatory evacuation of a rural subdivision near Kobe Road, south of the city of Anderson.

The area is called Anderson Subdivision and consists of 40-acre parcels located north of Kobe Road, on the other side of the Nenana River from the city of Anderson.

People who live there are under mandatory evacuation orders, according to Alaska State Troopers. The City of Anderson is under a Level 2 evacuation alert, meaning residents should be ready to go at a moment's notice.

“This is black spruce and we want to make sure we get everyone out of there,” said Tim Mowry, public information officer for the Division of Forestry. “It’s right near the Rex Complex fire scar.”

The Rex Complex was a 2015 wildfire in the area.

The area is sparsely populated, but the fire could jump the river, according to Denali Borough Mayor Clay Walker.

By 10:45 p.m. it had grown to 600 acres and firefighters were working to keep it from crossing the Nenana River and moving into the city of Anderson.

The borough is setting up an evacuation site at Tri-Valley School in Healy. The Tri-Valley Community Center will also be available. Volunteers are setting up 40 cots with blankets and other emergency gear, thanks to the borough, fire department and the local Neighbor-to-Neighbor program. Nenana School is also open as an evacuation site. The mayor encouraged evacuees to check in, just so people know they are safe.

The Division of Forestry began pulling firefighters from other ongoing fires to battle this new blaze. But they had to drive there.

“The fact is, we can’t fly tankers or water scoopers and that really complicates things,” Mowry said.

He said Sawtooth Hotshots are on their way, but having to drive in a van to get there.

“We have a hot shot crew from the Shovel Creek and a couple engines from Shovel Creek,” Mowry said. “We’ll try to peel a crew off of the Montana Creek fire.”

At last report, eight smokejumpers and two hotshot crews - the Sawtooth Hotshots and Warm Springs Hotshots - were enroute from Fairbanks. The Sawtooth Hotshots had just been released from the Chandalar Fire near Venetie and were preparing to head home to the Lower 48 when they got the call to respond, according to the Division of Forestry.

There were local reports that a couple homes were consumed by fire, but the Division of Forestry was unable to confirm that. The spokesman did say that multiple structures were threatened by the blaze.

The fire was reported at 6:47 p.m. The cause is unknown but thunderstorms and lightning strikes did move through the area.

"We're trying to make sure it doesn't cross the Nenana River," he said. The fire was "torching a half-mile in front of itself," running, and crowning. That means the fire was leaping ahead of itself to tops of trees. It was also spotting, throwing sparks and embers up to one-quarter to a half mile ahead of itself.

Smoke prevents aircraft from getting an aerial view of the fire. A couple scooping aircraft have been parked in Nenana for three days, waiting for visibility to improve.