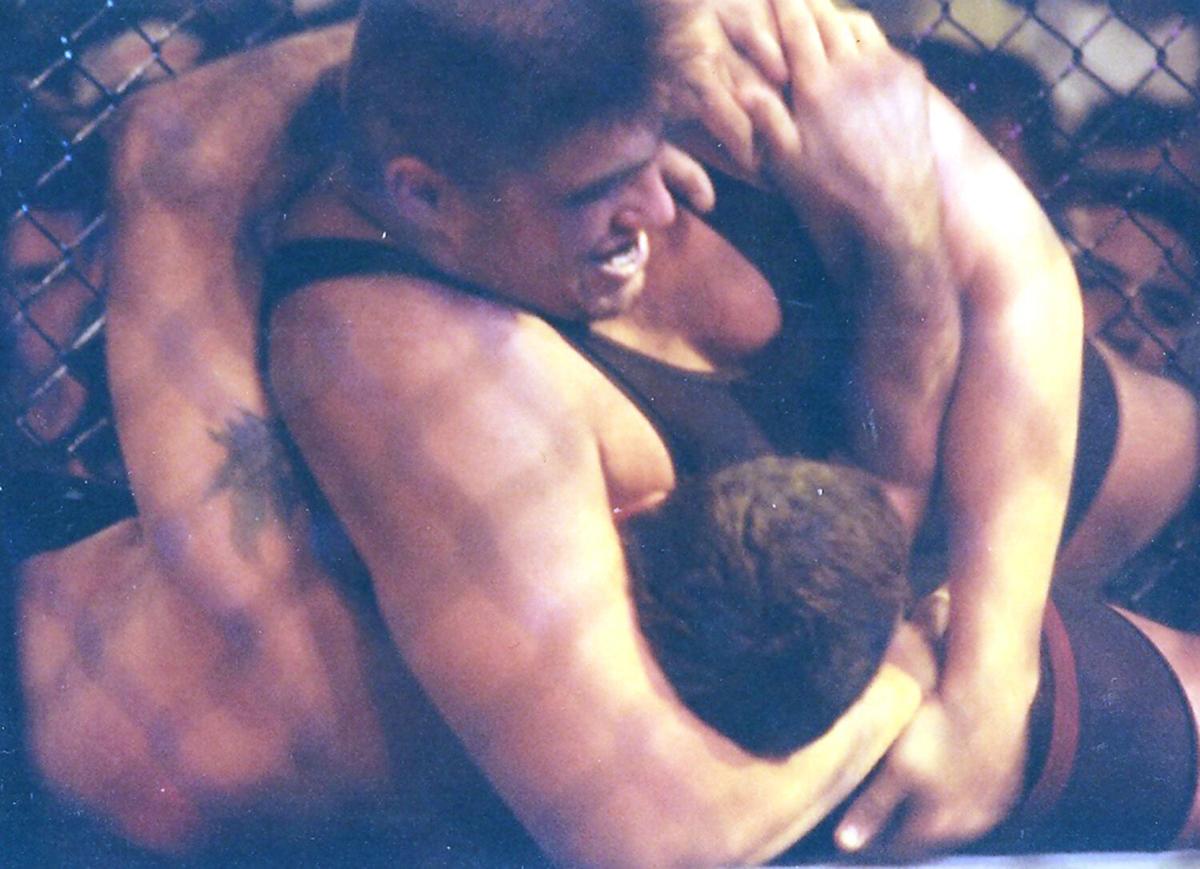 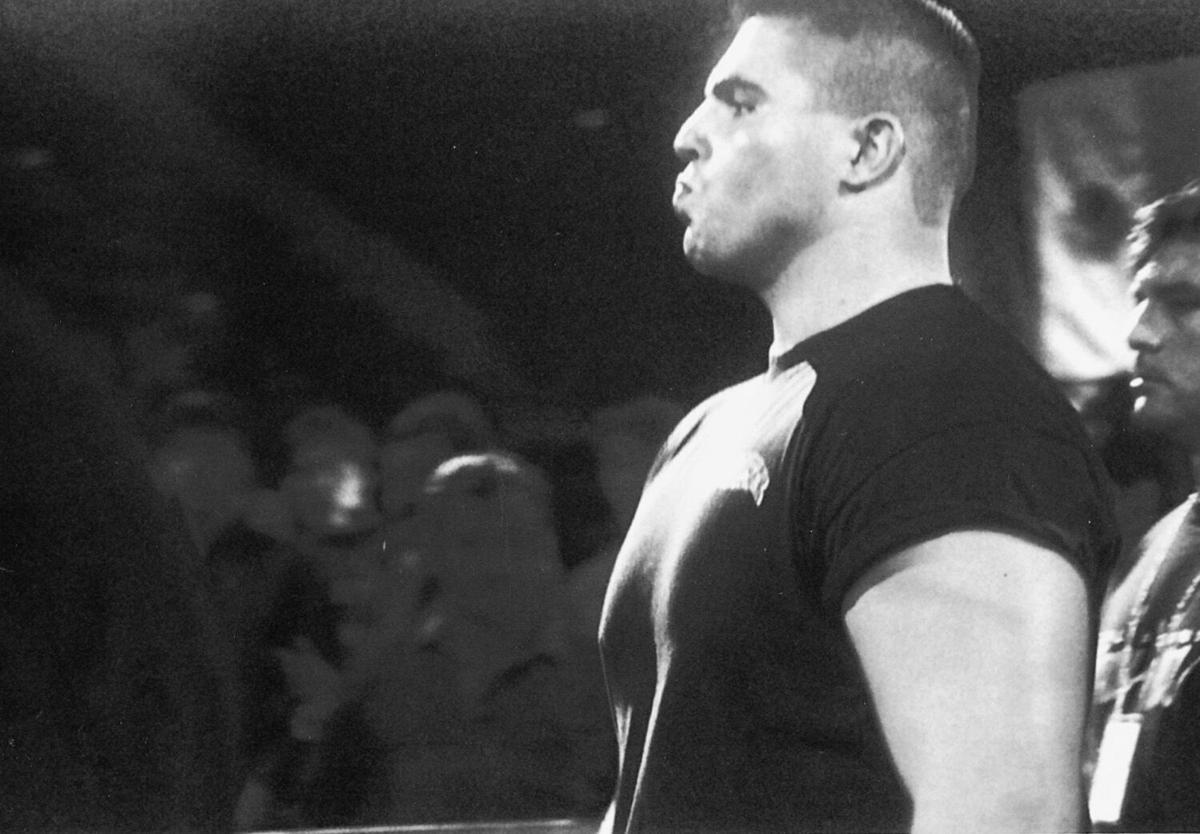 Paul Varelans squares off against his opponent at UFC7 in 1995. Courtesy Robin Postell 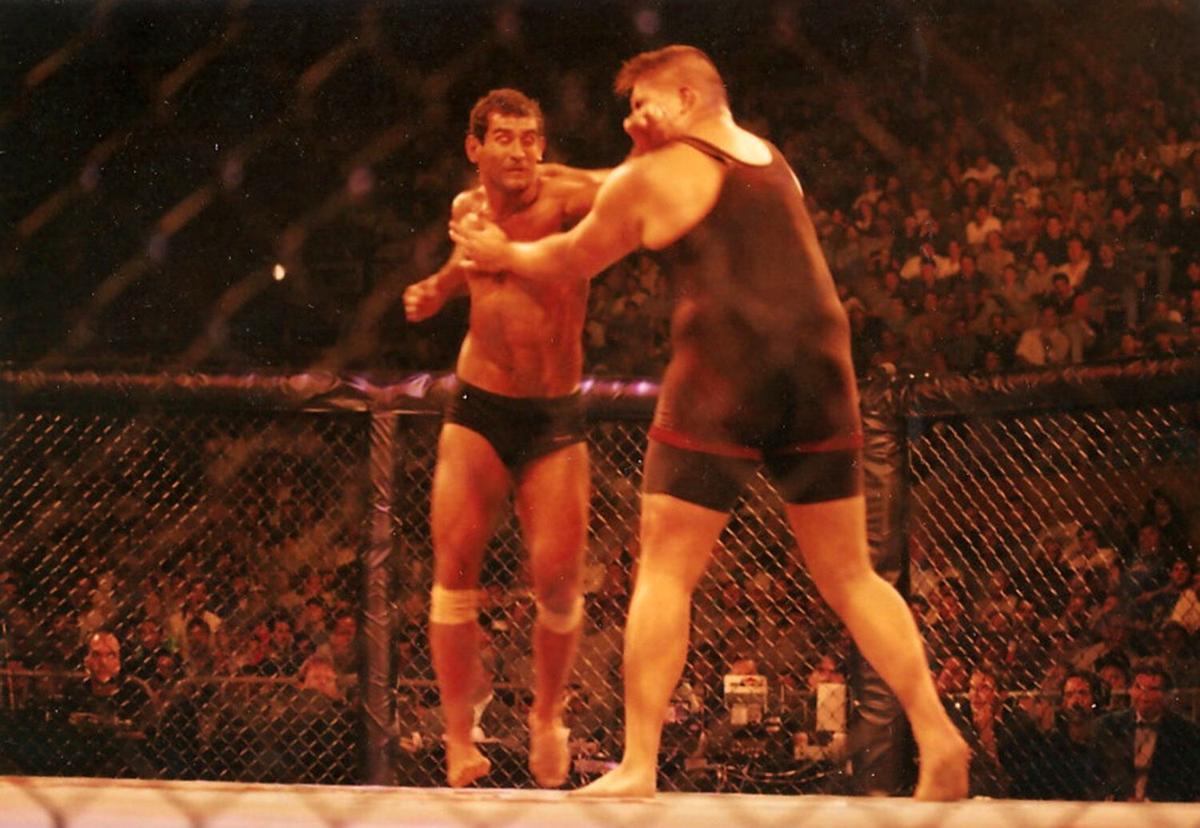 Paul Varelans fought against Brazilian Marco "King of the Streets" Ruas in the UFC7 fight in 1995. Courtesy Robin Postell 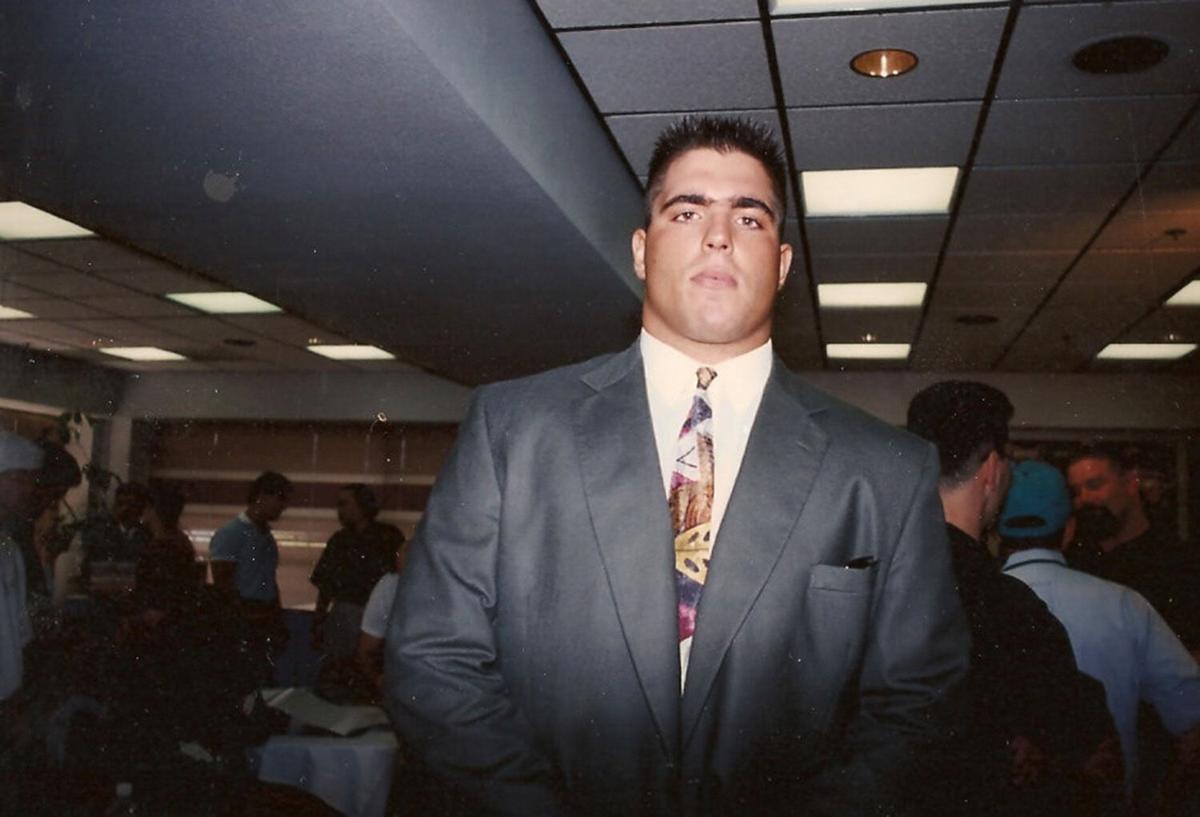 Paul at the press conference for UFC V1 in Casper, Wyoming, in the summer of 1995. Courtesy Robin Postell

Paul Varelans squares off against his opponent at UFC7 in 1995. Courtesy Robin Postell

Paul Varelans fought against Brazilian Marco "King of the Streets" Ruas in the UFC7 fight in 1995. Courtesy Robin Postell

Paul at the press conference for UFC V1 in Casper, Wyoming, in the summer of 1995. Courtesy Robin Postell

A 51-year-old Fairbanks mixed martial artist, Paul Varelans, died Saturday after a month of battling COVID-19. Varelans, who grew up in Fairbanks, was a pioneer in the Ultimate Fighting Championship known as “The Polar Bear.”

“He is the greatest fighter that came out of Alaska,” his friend, Sven Holmberg, said. “He is legendary.”

On Dec. 12, Varelans shared on his Facebook page that he contracted COVID-19. “Best way I can compare the feel of COVID-19 in my experience is, it’s like fighting a guy who specializes in kidney punches,” he wrote on Dec. 13. “They never stop.”

Varelans’ long-time girlfriend, Kim Watson, who lived with him in Atlanta for the past two years, said that shortly after Varelans tested positive, his symptoms worsened, and she called an ambulance for him on Dec. 15.

“Of course he didn’t want to go to the hospital,” she said. “He was pretty coherent — he asked for his charger and things like that — but he was in a very bad shape.”

At Emory University Hospital Midtown, Varelans was put on a ventilator and later into a medically induced coma with a goal to slowly bring him back up, Watson said.

But Varelans’ health kept declining, his friend Shane Viens wrote in a Facebook message to the News-Miner. Viens said that even though “some days seemed like he was going to pull through,” Varelans was fighting infection after infection that kept his heart from stabilizing, and doctors couldn’t bring him up safely.

On Jan. 15, Watson received a call from doctors saying that Varelans doesn’t have much time left. She came to the hospital and called Varelans’ mother and a couple of friends, including Viens.

“I stayed up all night,” Viens said. “His girlfriend was here and held the phone up to him so I could tell him I loved him one last time.”

Varelans died on Saturday after battling the disease for 31 days and leaving a lot of people heartbroken, Watson said.

“He had a colorful interesting life. I wouldn’t call it ordinary,” Watson said. “And he affected a lot of people.”

In his professional life, Varelans was one of the most popular figures from the early days of the UFC, according to the UFC website. He suffered nine losses and earned nine wins, consistently beating fighters like Cal Worsham, Mark Hall and Joe Moreira.

While Varelans lost to other athletes, some of his defeats would also leave a mark on the sport. In his 1996 UFC7 match, a smaller fighter, Marco Ruas, defeated Varelans using leg kicks, showing the effectiveness of the technique for the first time, Viens said.

As a fighter, Varelans was known for his size. Standing 6 feet, 8 inches tall and weighing over 350 pounds, Varelans needed the UFC to redesign the octagon cage to accommodate him.

“Paul was the original big man of the UFC” Veins said. “He was larger than life, literally and metaphorically.”

Holmberg joked that if Paul is standing at the Pearly Gates now, Saint Peter is likely to tell him, “Watch your head, big fella.”

Even as a child, Varelans had an impressive stature. Kirsten O’Malley, who lived a few doors down from Varelans at Chenana Apartments, remembers how in third grade Varelans “towered over his tiny (but extremely stern) German mother” who was struggling to find a way to discipline her son.

“She once took a large, flat snow shovel to his behind, ‘spanking’ him in the parking lot in front of our apartments,” O’Malley wrote in an email to the News-Miner. “I don’t think Paul felt more than a vague irritation that she was making his punishment public, and rolled his eyes and she sweated out her attempts to make him conform.”

Varelans grew up in Fairbanks and went to Woodriver, Ryan and West Valley schools where he started playing sports. Ed Teders wrestled and played football with him at West Valley. He said he remembers how Varelans participated in every training and practice, even the ones he didn’t have to do.

“He was jumping rope with us, and we joked, ‘What do you jump the rope for?’ since he didn’t have to gain weight or anything,” Teders said. “But he did everything the rest of the people did to be respected and accepted.”

After school, Varelans started sending his football reels to a list of schools he made and got accepted to San Jose State University on a football scholarship, Watson said.

“Basically he got that scholarship himself, without any help, and left Fairbanks at 18,” she said.

That courage inspired people around Varelans.

“Paul always went for it. He would get knocked out and he would get up, and we all saw it,” Holmberg said. “He was the first one to go out into the world, he was fearless that way, and it influenced me.”

After graduating, Varelans started his fighting career and competed in UFC and Extreme Championship Wrestling from 1995 to 1998. His work took him to Brazil, Japan, Ukraine and the Netherlands, Watson said.

The early days of UFC fights were very different from what the sport is today, with less rules and safety precautions, and “no plan or gloves,” Holmberg said.

“For us, watching his fights was terrifying,” Holmberg said. “Back then in the early fights, I’m surprised nobody got killed. But Paul could take a punch like nobody I’ve ever seen, and then he would use his elbows and crumble them. Smaller guys are always faster, but Paul would persevere.”

Viens said that while Varelans didn’t win every fight, he “was known as a giant that wouldn’t give up and couldn’t be knocked out,” and “some of the biggest crowd reactions came during his losses because of how he hung in there until the end.”

While the sports Varelans practiced were violent, his friends remember his soft and artistic nature. Watson said that Varelans was a storyteller who wrote poetry and even worked on a children’s book about a polar bear and vulture, with a message about climate change.

Holmberg remembers discussing literature with Varelans who “had a brain of a philosopher on top of being a fighter.”

“He was a gladiator who liked to read Franz Kafka,” he said.

But Varelans’s kindness is the red thread tying every interview about him.

“He was a gentle giant with a heart bigger than his body,” Viens wrote. “He loved animals. He loved kids. He had a huge heart and would check up on friends randomly.”

Another thing Varelans loved was Alaska.

“He was very proud to be one of us,” Viens said.

In 2008, Varelans’ came back to Fairbanks — his hometown that might have shaped him as a person.