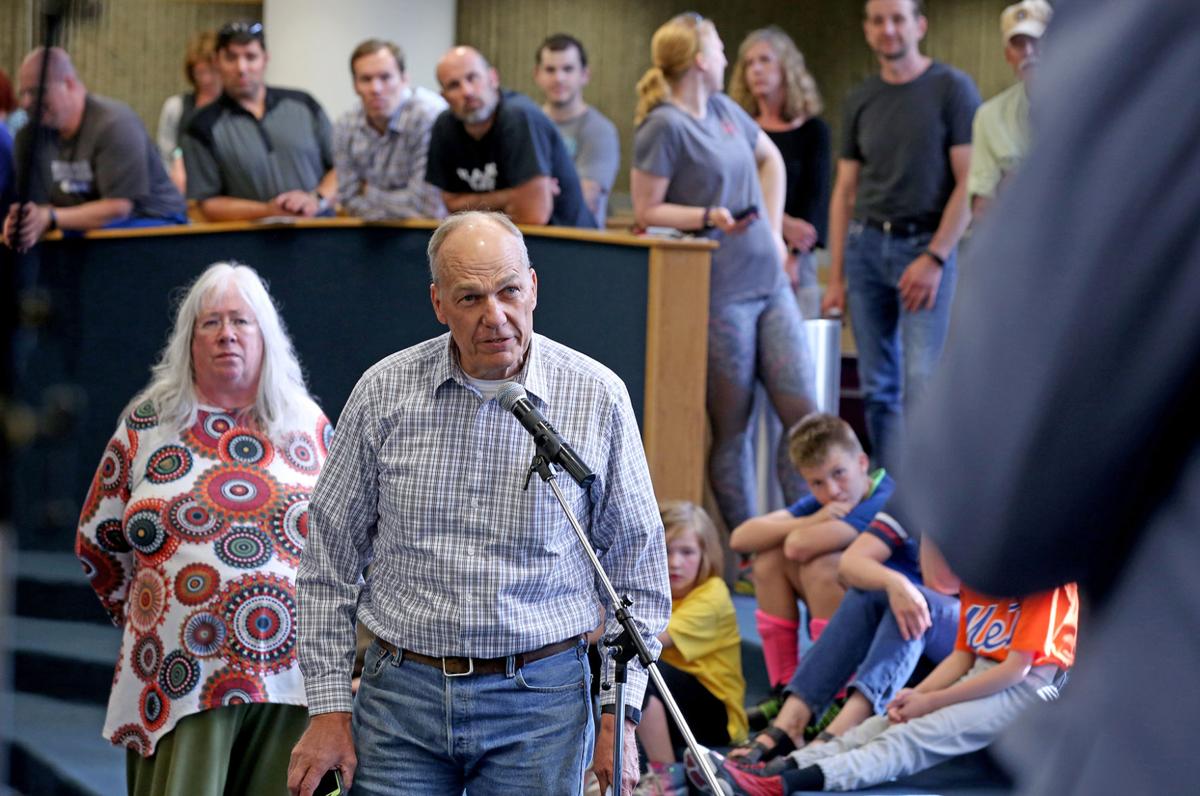 David Kilbourn asks about the cost estimates for the different project proposals involved for both the short term and long term plans as University of Alaska Fairbanks Chancellor Dan White hosts a community meeting Tuesday to discuss transitioning the Alaska Nanooks hockey team to the Patty Ice Arena Tuesday afternoon, June 18 2019 in the UAF Wood Center.

The subject of bringing hockey back to the University of Alaska Fairbanks Patty Ice Arena brought out mixed views Tuesday night during a public forum conducted by UAF Chancellor Dan White in the Wood Center on campus.

The Nanooks hockey team, of the NCAA Division I Western Collegiate Hockey Association, has been the main tenant of the Carlson Center since the arena opened in 1990. The Patty Ice Arena opened in the early 1980s.

White released a letter May 2 about a two-year plan to have Nanooks return to the Patty Ice Arena. The planned return has to do with the advanced aging of the Carlson Center’s ice plant, or cooling system, underneath the arena’s floor.

UAF is contractually obligated to play in the Carlson Center in the upcoming season. However, White stated in the May letter that the Patty Ice Arena will be used as a backup option for the Nanooks hockey team “if the Carlson Center ice plant cannot meet our needs at any time during the 2019-20 season.”

About 150 people attended the forum in the multi-level lounge on the first floor of the Wood Center. The turnout included Nanooks hockey fans and supporters; Nanooks head coach Erik Largen and former head coach Dallas Ferguson (now an assistant coach at Denver University); former Nanooks hockey players; and UAF administrators, faculty and staff. White, during the forum, announced planning committees for the planned return to the Patty Ice Arena.

“We want to have our student-athletes perform and our students attend.”

One committee will be a transition committee to help get the Patty Ice Arena ready for the Nanooks to play there on a regular basis.

After speeches from White, Gootee and UAF vice chancellor of student affairs and athletics director Keith Champagne, a public comment portion took place during the last half hour of the hour-long forum.

Shawn Head, a volunteer office manager for the Nanooks hockey team for 18 years, during the comment period mentioned to White the university closing three dormitories because of there being not enough students to fill them.

“I know originally when you put out the notice of having hockey on campus, not everyone but some people said positive things — how wonderful to get the students involved and they’re right on campus,” Head said. “I’m not really seeing that if we’re closing three dorms. If we’re closing three dorms, we’re not necessarily going to have those students filling those seats.”

Aaron Walling, a UAF graduate and sports anchor for KXD Channel 13, was in favor of returning Nanooks hockey to campus.

“I think the students will come. It takes time,’’ Walling said.

Largen said the biggest takeaway from the meeting was about how passionate people are about hockey in the Fairbanks community and for UAF.

“I support a plan which puts us in a position where we have long-term viability. I support a plan that we’re at a Division I facility that is worthy of the fans that are in this room and the people of Fairbanks,’’ he said.