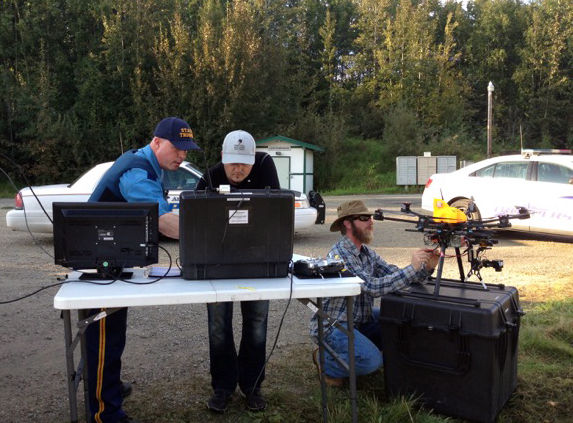 Nick Adkins (left), a pilot with ACUASI, prepares the Ptarmigan unmanned aircraft for a flight while Trevor Purcell of ACUASI and Alaska State Trooper Tom Mealey look at maps of the search area. 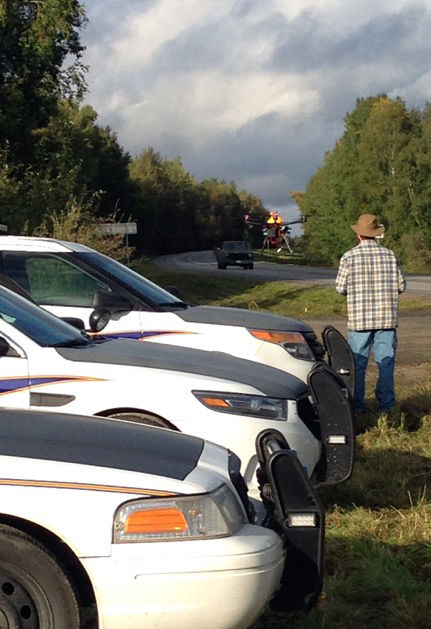 Nick Adkins, a pilot with ACUASI, lands the Ptarmigan unmanned aircraft after a flight.

Nick Adkins (left), a pilot with ACUASI, prepares the Ptarmigan unmanned aircraft for a flight while Trevor Purcell of ACUASI and Alaska State Trooper Tom Mealey look at maps of the search area.

Nick Adkins, a pilot with ACUASI, lands the Ptarmigan unmanned aircraft after a flight.

FAIRBANKS — When an 11-year-old Fairbanks boy ran away this week with a rifle, Alaska State Troopers realized they had a tough search on their hands. So they reached out to the University of Alaska Fairbanks for some unmanned backup.

Dustin Ames disappeared in the Sheep Creek area early Thursday morning, taking one of his father’s rifles and leaving on his bicycle.

“You’re dealing with someone who doesn’t want to be found ... then the added complexity of him having a gun,” trooper Thomas Mealy said.

Troopers knew they would have a difficult time finding Dustin in the woods around Goldstream Valley if he hid or refused to respond to calls. They also realized they couldn’t ask the normal search-and-rescue crews for help because a gun was involved and they didn’t want to put anyone in danger.

Troopers found Dustin’s bike and what they believed to be his campsite. Figuring he likely would be nearby, they began organizing a search of the surrounding forest, but searching blindly on foot through the underbrush would be difficult, and they didn’t have any infrared cameras they could search with from the air.

So Mealy contacted an old friend he knew from the military who now works at UAF’s Alaska Center for Unmanned Aircraft Systems Information. He asked if the center had any unmanned aerial vehicles with thermal infrared capability.

A short time later, the center had a small hexacopter in the area with a thermal infrared camera ready to assist in the search. The center’s crew programmed the drone to automatically fly a grid over the search area, scanning for heat signatures from the air above while troopers searched on foot below.

They didn’t find Dustin in the area, but with the help of the thermal camera and the drone they determined he wasn’t there in a shorter timeframe and ruled out his presence more definitively. Dustin was found later that evening when a motorist passing by saw him and drove him home.

“Basically looking at heat we were able to determine he wasn’t where they thought he was,” said Cathy Cahill, the center’s director.

Cahill said this kind of search was a good opportunity to demonstrate the usefulness of drone technology. This was the center’s first time coordinating with troopers but not their first partnership with law enforcement or public agencies. The center has worked in the past with the Fairbanks Police Department, mapping crash scene investigations and with the Alaska Fire Service, charting hot spots and fire boundaries for wildland firefighters.

Mealy said the drone is something they likely will use again.

“We have a lot of times where we’ve got search-and-rescue where we’re looking with eyeballs and helicopters flying around, but you can’t see through foliage. The (drone-mounted infrared) was a capability that we could actually see through the foliage what was actually going on on the ground,” he said. “It was really a great capability that I think we’ll have a lot of applications for in the future.”