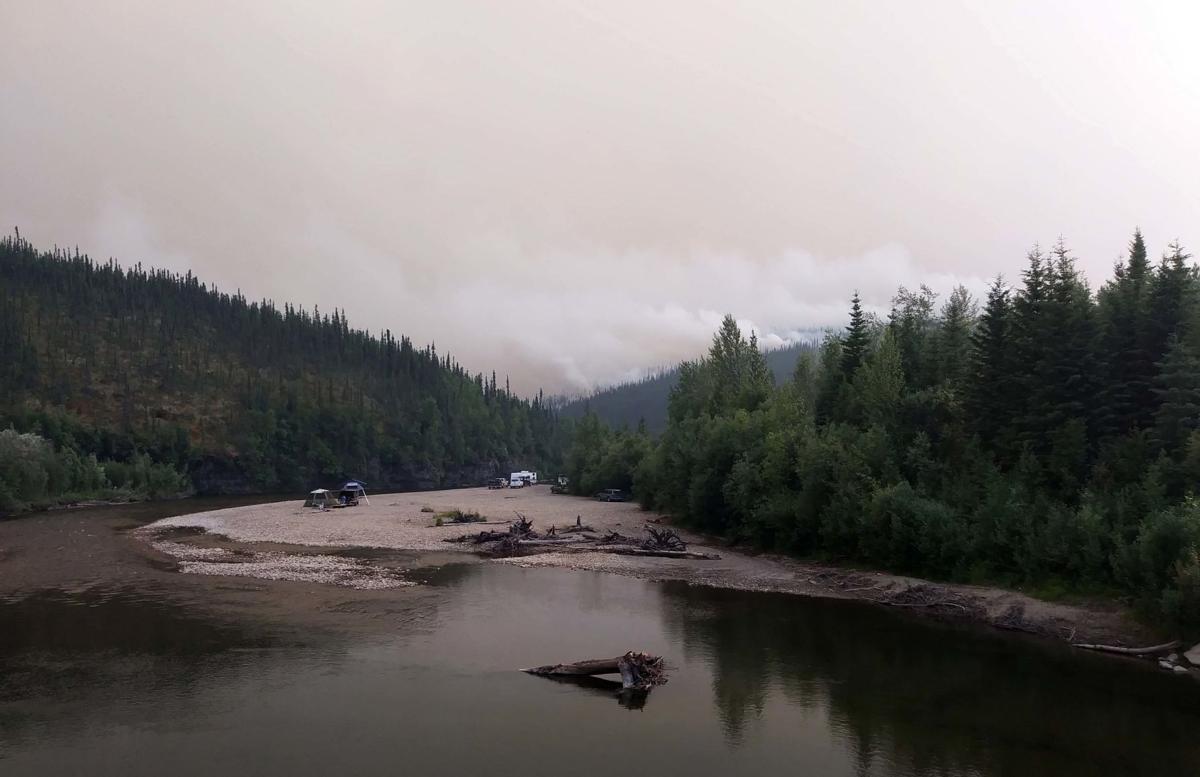 The Nugget Creek Fire is burning in the hills south of the Chena River at Mile 37 Chena Hot Springs Road on Saturday, June 29. The fire is in monitor status. Photo courtesy of Michelle Goodwin, Fairbanks 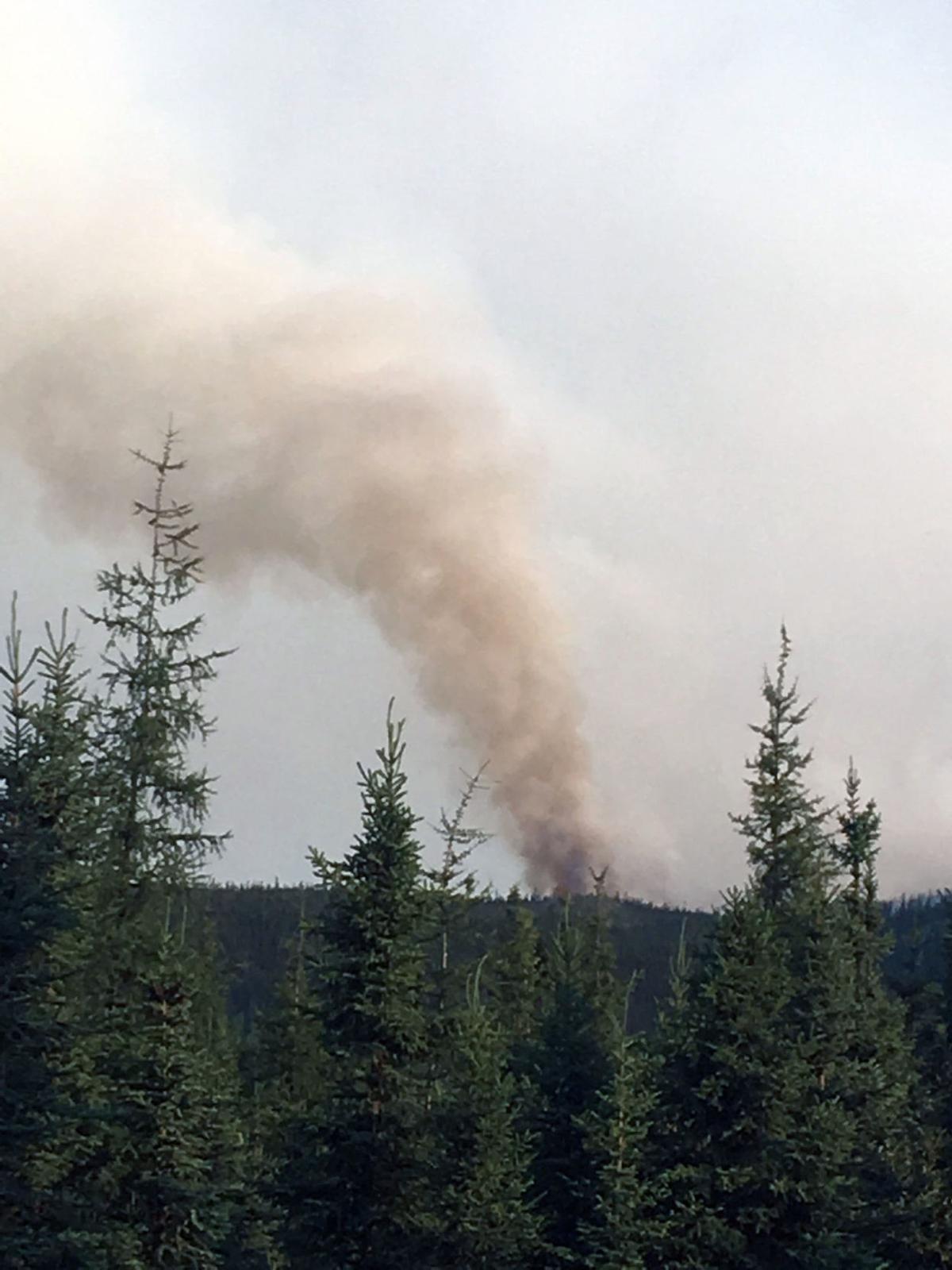 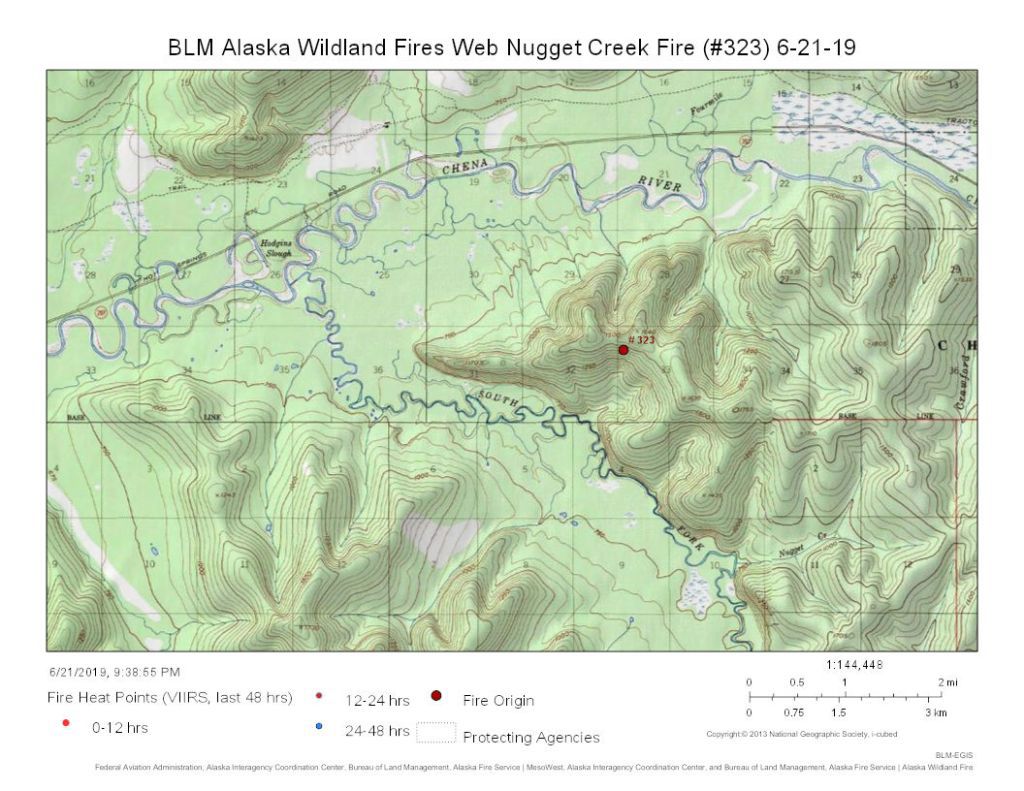 The Nugget Creek Fire is burning in the hills south of the Chena River at Mile 37 Chena Hot Springs Road on Saturday, June 29. The fire is in monitor status. Photo courtesy of Michelle Goodwin, Fairbanks

Here is an update on other notable fires burning in the Interior:

The Nugget Creek Fire burning in the Chena River State Recreation area scorched 3 miles along a ridge near mile 37.7 Chena Hot Springs Road on Saturday, bringing the total acreage of the blaze to about 1,688 as of Saturday afternoon.

The Alaska Division of Forestry sent two engines and four firefighters to monitor the fire. They remained on the scene throughout the night.

The blaze was most active in areas of black spruce trees, which are highly flammable.

The Division of Forestry had hoped to map some of the fire Sunday with a drone outfitted with an infrared camera, an operation that was dependent on levels of smoke pollution in the area. Heavy smoke levels had prevented the use of helicopters.

The 150-acre Rainbow 2 Fire is holding steady without significant growth near Delta Junction. The fire, caused by lightning, began Saturday about 15 miles west of Delta Junction and 2 miles east of Delta Creek.

The fire is burning 8 miles north of the Oregon Lakes Fire, which burned 34,500 acres earlier this season.

The Rainbow 2 Fire is burning in mostly black spruce. Tankers and water-scooping planes have been contributing to the tamp-down effort with smokejumpers inspecting and assessing the area for structure protection near Rainbow Lake and the Richardson Clearwater River.

More information on wildfires in the Interior and the rest of the state can be found at www.akfireinfo.com.

Twenty firefighters are on this fire, most recently listed as 17 acres. The fire is south of the Tanana River, 20 miles southeast of Manley Hot Springs, according to akfireinfo.com, the interagency information website.

Crews have contained 50% of the fire, which has not grown for several days. "The fire is burning in the imprint of a previous fire, reducing the amount of fuel available to burn," the site's update reads. "However, the fire is burning deep into the ground due to the hot, dry conditions; firefighters will need to conduct an extended mop-up operation before it can be called out.”

This fire is burning in Denali National Park and Preserve, 22 miles southeast of Kantishna. Five firefighters are working to protect several structures near this fire, which is in a limited suppression area. "Active fire behavior resulted in some movement and fire growth but no spectacular runs Saturday," the latest interagency update reads. "The fire is now estimated at 5,144 acres. Late Saturday, firefighters reported that the fire was still 3 to 4 miles from the Slippery Creek cabin, east of the main fire."