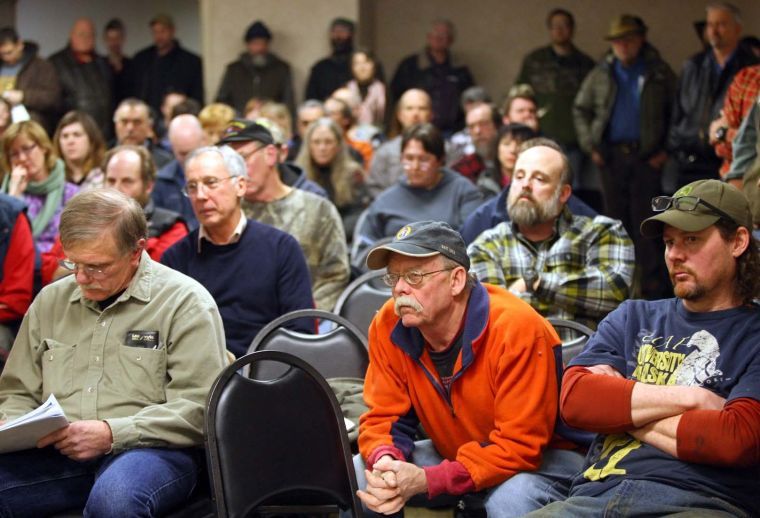 A standing room only crowd fills the room for the The Alaska Department of Environmental Conservation meet to take public comment on proposed new air quality regulations Tuesday evening, Jan. 7, 2014, at the Westmark Hotel.

A standing room only crowd fills the room for the The Alaska Department of Environmental Conservation meet to take public comment on proposed new air quality regulations Tuesday evening, Jan. 7, 2014, at the Westmark Hotel.

FAIRBANKS — The first of two public hearings on the state’s proposed air pollution regulations chiefly aimed at Fairbanks’ wintertime air was filled with appeals for personal freedom, pleas for the health of the public and hecklers.

More than 60 people attended the hearing hosted by the Department of Environmental Conservation on Tuesday night at the Westmark Hotel to comment on an array of draft regulations.

The regulations, which were released last fall, include standards for wood stove cleanliness, a measure that allows the state and approved local municipalities to coordinate on air episodes, and a new provision that could allow the state to curtail wood burning during particularly bad air pollution days.

The state has held several open houses and said the regulations will leave plenty of room for people to continue burning wood, especially for those who only have wood heat or can’t afford another fuel, even when air is at its worst.

However, the general reaction to the regulations was negative.

“We’re doing this for survival. You come out and try to regulate us to death now,” Gary Corle said.

That was the refrain heard from the majority of the testifiers Tuesday night: that the ability to burn wood, especially in times when heating oil is so expensive, and keep warm is a basic right that is endangered by these proposed regulations.

Some testifiers likened the regulations to a dictatorship, others blamed the coal power plants in town, some asked if wintertime pollution is so bad why isn’t anything being done to stop summertime fires and others pledged to take part in “civil disobedience” if the state asks people to curtail wood burning.

Ron Kuvalik said previous efforts, such as the DEC’s program to clean up emissions from cars, have all been fruitless.

“Every agency and every subdivision of government with a proposal to clean our air — everyone of them — has given us clean wallets, not clean air,” he said, to a whooping applause from the audience.

Others brought up the recent local votes that barred the borough from imposing any regulation on burning whatsoever. They said the state should follow suit and stay hands-off, even though advocates of the latest initiative said that it should be up to the state’s regulations and resources to combat wintertime air pollution.

When a small minority of the group, which included a doctor, a couple of parents and a few people who attributed their poor health to years of breathing wood smoke, said they should consider the regulations for the good of the community’s health, they were met with jeers.

“I believe it’s a local problem and should require local solutions ... but I think that the borough has its hands tied politically,” Don Pendergrast said. “I think we need to have immediate action, and I don’t want to see this issue put off and put off, and the longer we’re breathing bad air. I think that all should emphasize the carrot approach to emphasize the exchange and we should subsidize installation, but also the judicious use of the stick so people will comply.”

Pendergrast’s testimony was met with an audible “boo” and the sound of another member of the public blowing a raspberry. The woman in front of the two turned around and asked them to “grow up,” upon which she was sternly told to “turn around.”

When one testifier read off a list of the measures she has to go through to go outside during the particularly bad winter days, another man in the back yelled “boo.” Another pro-regulation testifier commented that the situation was becoming hostile, unfriendly and unfair.

Mary Shields, the first woman to complete the Iditarod, spoke in favor of the regulations and continued on to criticize the tone of the meeting.

“I’m shocked,” she said. “I didn’t know this community was this selfish as we are. There are children that are really sick from the air they’re breathing, there are teachers that are really sick and there are people who just can’t give up their independent rugged Alaska lifestyle. ... If what we’re doing is harming children’s health, we should be ashamed of ourselves.”

• Open house: The final open house on the regulations will be held from 5-7 p.m. today at the Westmark Hotel Minto Room.

5 p.m. Jan. 23. For information on how to submit public comment either online or by mail, visit dec.alaska.gov/air and click on “Proposed  PM 2.5 Regulations.”