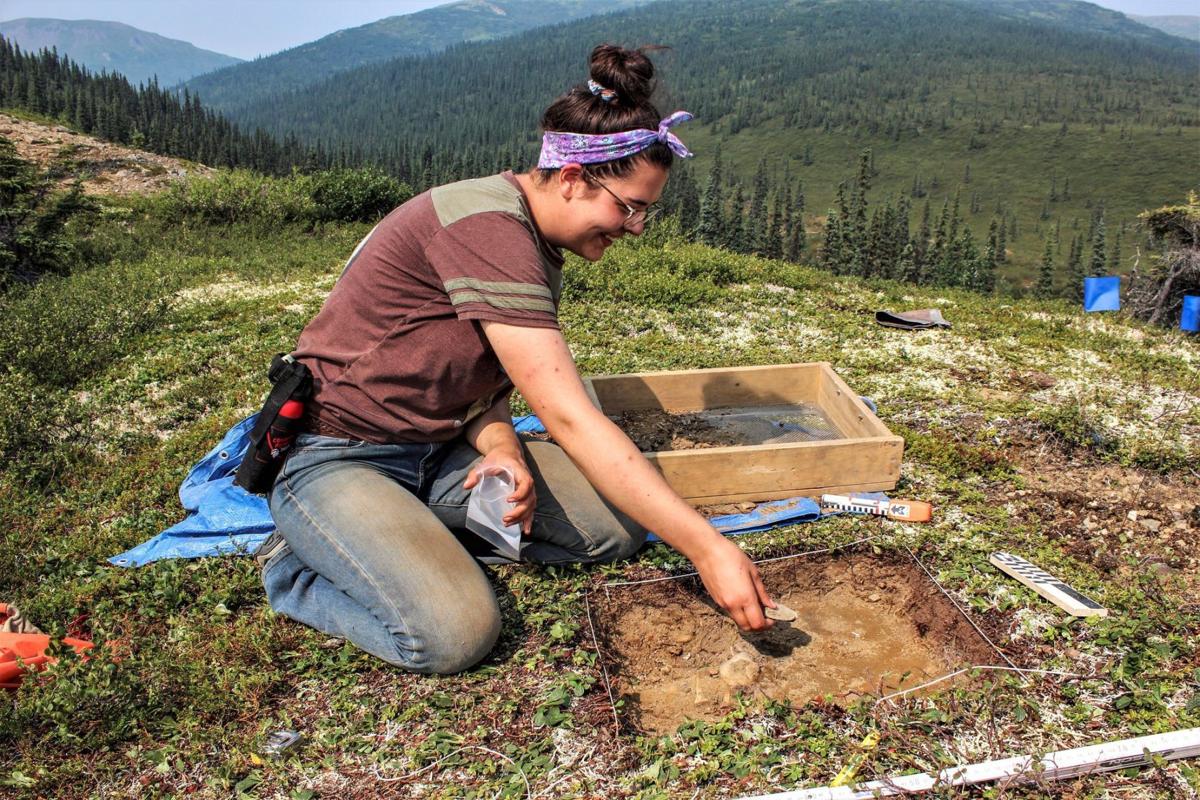 Park Service archaeologist Kiana Carlson collects an artifact at a site. The mountains rise behind her, and she smiles as she examines an object. Photo courtesy National Park Service 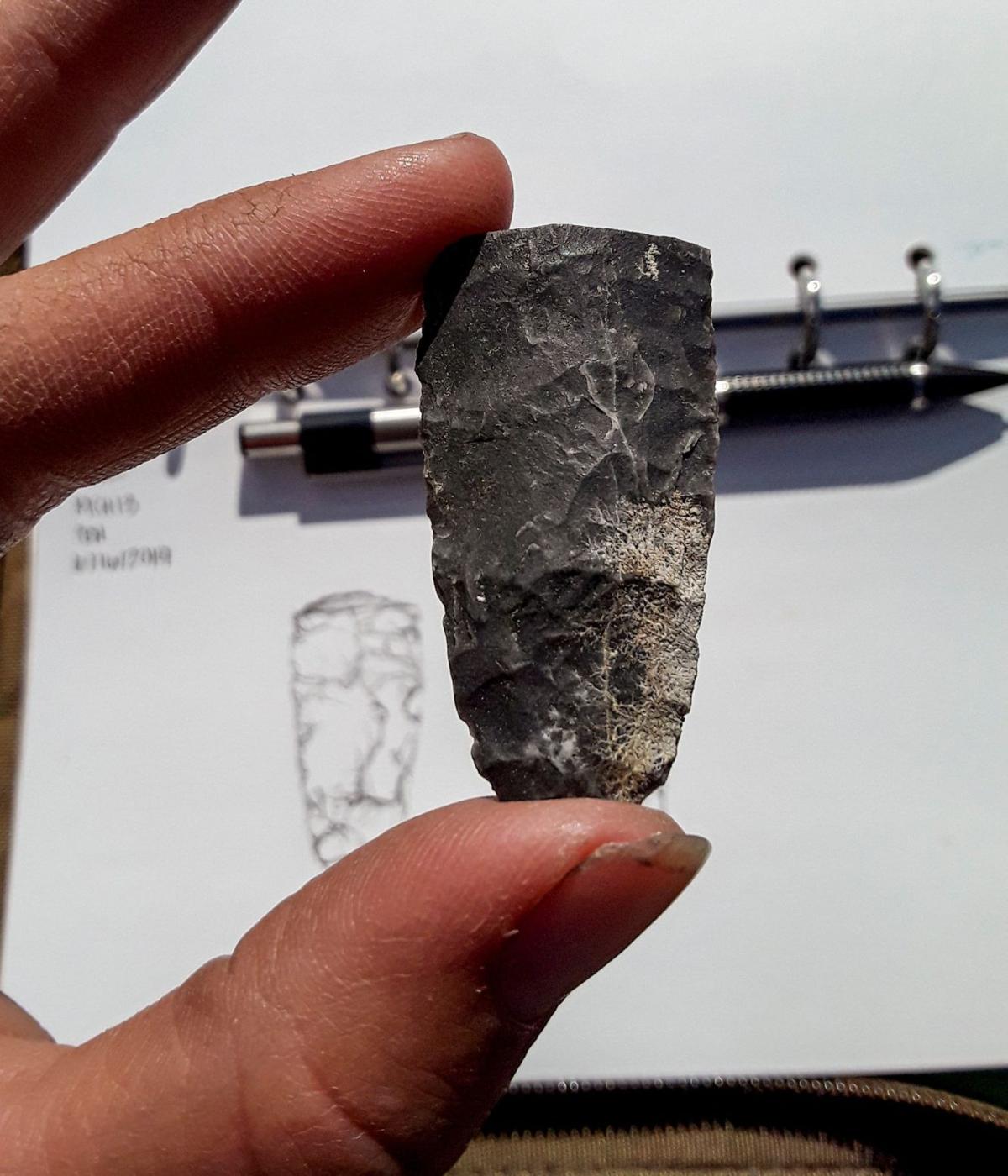 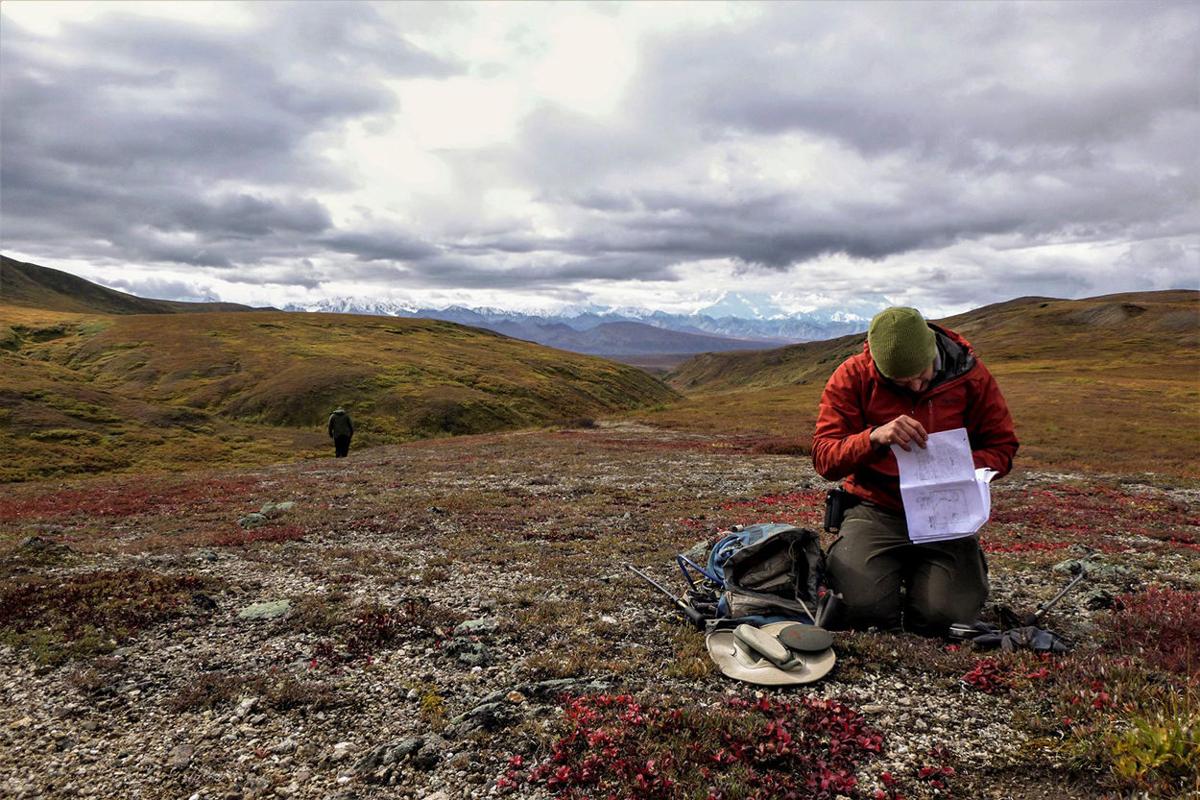 Park Service archaeologist Kiana Carlson collects an artifact at a site. The mountains rise behind her, and she smiles as she examines an object. Photo courtesy National Park Service

Over the summer, a team of archaeologists visited more than 50 sites in the northeast corner of Denali National Park and Preserve, documenting evidence of human activity that dates back over 13,000 years. 2019 was the third summer of this four-year project, the aim of which is to have as many as 80 of the 400 known “cultural resource” sites added to the National Register of Historic Places for preservation.

“A lot of people think of Denali as this big natural wilderness, but the human history is very long. People have been walking there for thousands of years,” said Phoebe Gilbert, who serves as the park’s Cultural Resources Program Manager. “Denali National Park is located on the traditional homeland of the western band of Ahtna and the Doyon people. That record goes back over 13,000 years.”

The sites that Gilbert and her team are documenting range from prehistoric sites with evidence of stone tool production to historic remains related to the development of the park’s infrastructure.

“This project was designed to look at sites that were first recorded in the 1980s, which haven’t been assessed since then. In addition to that we found 20 new sites this summer,” Gilbert said. “Every year we go out and we find more sites, because people lived throughout this whole park.”

The annual $110,000 cost of the project is wholly funded by the National Park Service, which has hired two year-round archaeologists for the duration of the project as well as several summer staff who help with the survey and documentation. According to Gilbert, the year-round staff work on analysis, reports and determinations of eligibility for the National Register of Historic Places during the nonfield season months, which is October-May.

The project, which is just one part of an ongoing effort to inventory cultural resources within the park, sees the team revisiting sites that were initially discovered nearly four decades ago, but haven’t been examined by anyone in over 30 years. Gilbert is quick to note that she and her team are just scratching the surface of what could be learned at Denali.

“As we travel to the location of these sites we find previously undocumented sites along the way,” she wrote in an email to the News-Miner. “Currently there are 411 documented sites in the park, and — as the 20 new sites which were discovered this summer attests to — every year we document more; less than 1% of the park has been surveyed for cultural resources.”

Gilbert said another reason existed why more sites are being discovered as time goes on — and it’s a surprising one: climate change.

“With climate change and the way that vegetation changes, sometimes you can find new sites that weren’t visible in the past,” she said.

The analyses conducted through the project inform staff on thousands of years of human activity on the land, which includes territories traditionally occupied by Dena’ina, Koyukon, Lower Tanana, and Upper Kuskokwim Alaska Native communities.

“A lot of the older sites that we find have leftover materials from toolmaking,” Gilbert said. “One of the most common artifacts we find from the indigenous cultures are the waste rock that is left behind when they make stone tools — like, when they’re making arrowheads or spear points.”

Gilbert and her staff are still analyzing the data from the summer and processing charcoal for radiocarbon dates. She said they estimate that the artifacts found at the new sites this summer date from about a thousand years ago to the mid- to early Holocene period, which is 7,000-10,000 years ago. They also found several sites from the past 100 years, after Euro-Americans had arrived in the area.

“The sites add to our understanding of the lives of the people who called this park home in the past as well as for those who call it home today — the western band of Ahtna and the Doyon peoples,” Gilbert wrote. “Five different groups of Athabaskan-speaking people have traditionally used and lived in the area that is Denali National Park, so we know that there is a rich and long history of the area, and these sites add to that story.”

Summer 2020 will be the last field season for the project, after which Gilbert and her staff will compile updated condition assessments for as many as 80 of the sites, in the hopes of having them added to the National Register for Historic Places. Gilbert said that, in short, there are two criteria that sites have to fulfill in order to be eligible: they have to be relatively intact; and they have to improve the understanding of the past.

“It’s possible some of the sites won’t be eligible — but we’re also looking at possibly doing district nominations,” Gilbert said, referring to having a large area featuring a number of cultural resource sites registered as an historic place. “When you look at the landscape as a whole, they (cultural resource sites) are a significant feature of the larger landscape.”