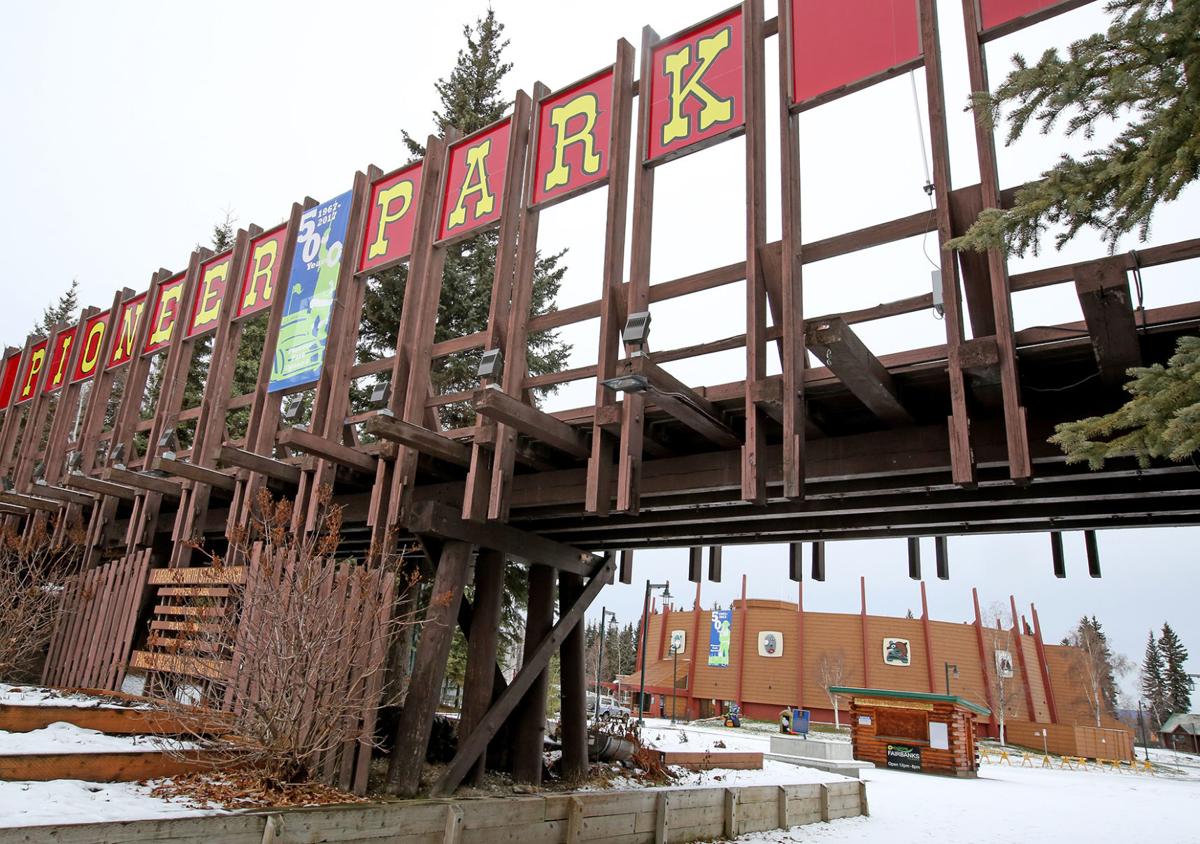 The entrance to Pioneer Park with the Alaska Centennial Center for the Arts in the background on Oct. 26, 2017. The Fairbanks North Star Borough is facing financial hardships and doesn't have the funding to maintain some of its infrastructure and facilities. 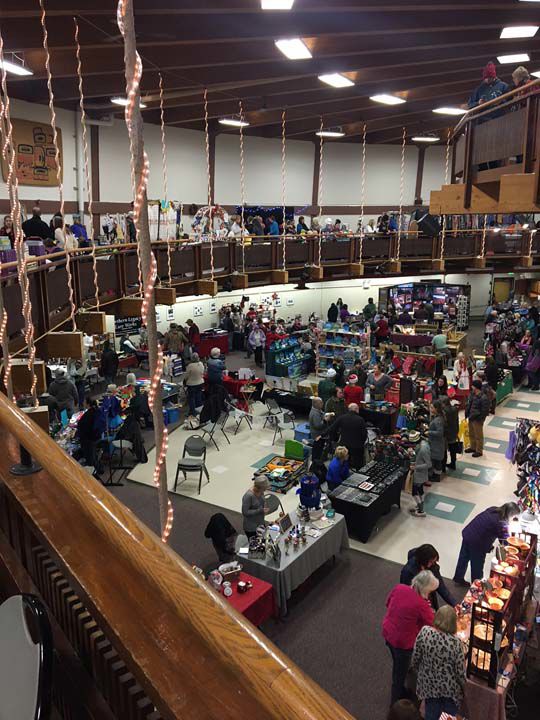 Vendors pack the Centennial Center for the Arts in Pioneer Park for an annual holiday bazaar. The Fairbanks North Star Borough is closing the 52-year-old civic center after it was deemed unsafe.

The entrance to Pioneer Park with the Alaska Centennial Center for the Arts in the background on Oct. 26, 2017. The Fairbanks North Star Borough is facing financial hardships and doesn't have the funding to maintain some of its infrastructure and facilities.

Vendors pack the Centennial Center for the Arts in Pioneer Park for an annual holiday bazaar. The Fairbanks North Star Borough is closing the 52-year-old civic center after it was deemed unsafe.

Five of the 22 columns that help brace the roof and outer walls at the Alaska Centennial Center for the Arts are rotting on the inside. A borough engineer noted the rotting in a technical report by a company hired to examine the columns. He shared the results with top borough officials and the mayor deemed the 52-year-old building “unsafe and not suitable for public use.” The Centennial Center was abruptly closed for repairs on Friday.

The Fairbanks Arts Association, the only tenant at the center, is looking for a new place and help with movings offices, a store and gallery. The association is also looking for a new venue for multiple upcoming events, including the largest fine art photography exhibition in the state.

A high school dance that was scheduled at the centennial center on Friday was relocated to the Birch Hill Ski Center. A fundraiser for the Yukon Quest International Sled Dog Race that was to happen today is reportedly being postponed to a later date at a new location.

The columns need about $100,000 worth of repairs, borough officials said at a Friday afternoon news conference. The center is expected to remain closed for 90-120 days.

“What prompted the decision today was the safety of the community,” Borough Mayor Bryce Ward said. The husband and father of two said the columns are in such a condition that he would not want his family visiting the building.

Recent snowfall had no factor in the decision to close the center. Officials are worried about its ability to withstand a full snow load.

Dave Vanairsdale, borough architect/engineer, said the columns were drilled and tested in more than 200 areas. A report provided to the borough in October shows “five columns had a significant amount of decay in the interior that you wouldn’t normally see,” he said. The damage is not visible from the outside.

The condition of the center has been a concern in recent years, and Vanairsdale said he visits the building multiple times a week to monitor it. At one point, the borough had scheduled repairs but delayed the work pending testing on the columns.

The column repairs will entail replacing rotting wood. Similar repairs were made to seven columns in 2014, officials said.

Public Works Director David Bredlie has recommended demolishing the Centennial Center. Ward said at the news conference that he has not made a final decision on whether to tear down the building, but for now he wants to repair the facility. The center is used by a mix of public and private groups for a variety of events throughout the year.

Groups that use the facility have few other options, Ward said. Events held at the Centennial Center include cultural gatherings, tea parties, craft bazaars and trade shows.

The Centennial Center includes an exhibit hall, second-level mezzanine, an upper level that includes a concession stand-style kitchen, a meeting room, theater and dressing rooms. The Bear Gallery on the third floor, run by the arts association, regularly hosts events.

Ward expressed regret about the impact on people, businesses and groups that will need to find a new location for their events in the coming months. The borough is also planning to temporarily close the Mary Siah Recreation Center, which has meeting rooms, pending extensive repairs planned for 2020.

Questions about upcoming events at the Centennial Center can be directed to the Pioneer Park main office at 459-1087, borough officials said.

Jessica Pena, executive director of the arts association, will share information about the location of upcoming events once new venues are located. She is reaching out to community partners for help, she said.

“We have already begun communication with the artists we work with,” Pena said.