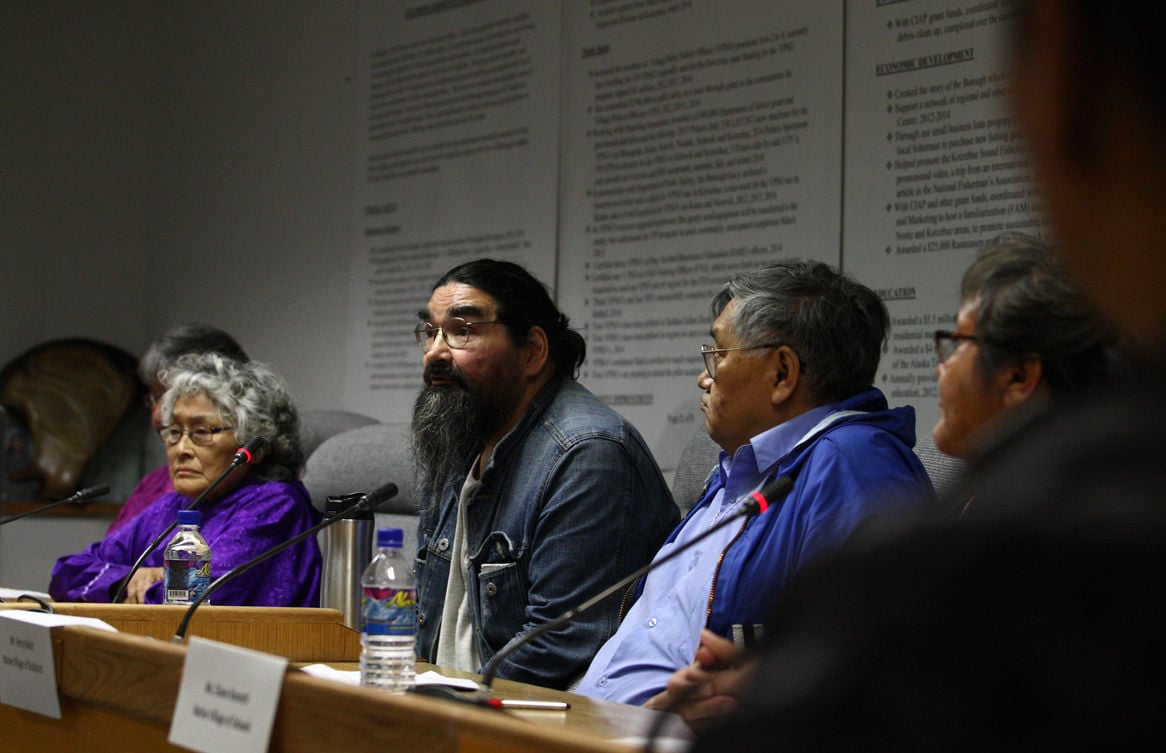 Jack Schaefer, President of the Native Village of Point Hope Indian Reorganization Act Council, third from left, speaks during a climate change and resiliency roundtable with presidents and representatives of Northwest Alaska Tribal Government Councils at the Northwest Arctic Borough Chambers before President Obama's visit in Kotzebue on Wednesday, September 2, 2015. 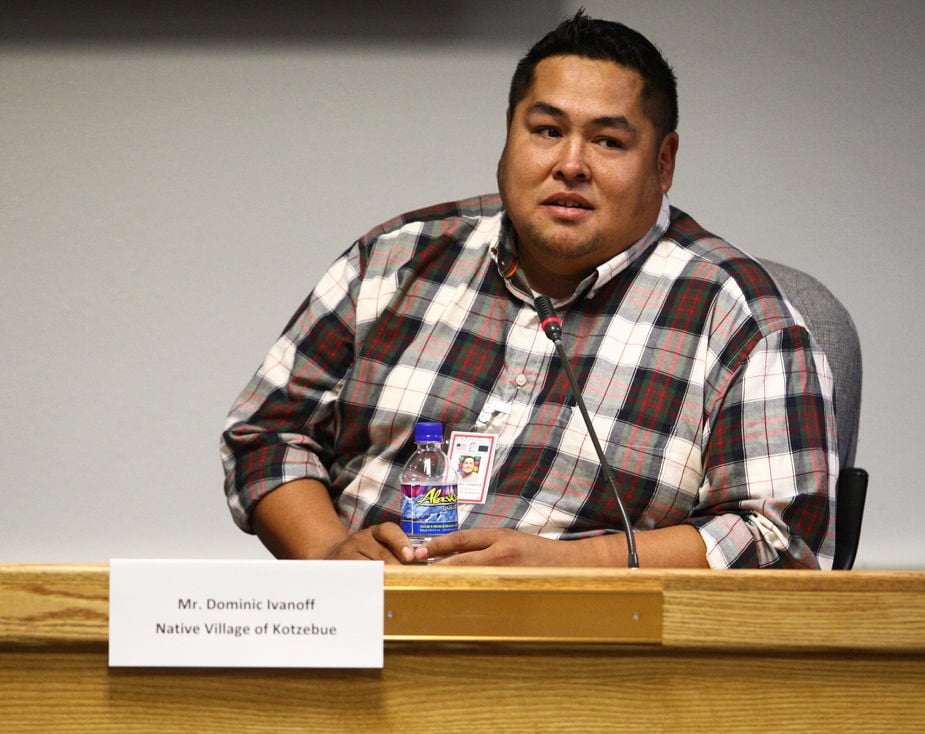 Dominic Ivanoff, Vice Chair of the Native Village of Kotzebue Indian Reorganization Act Council, speaks about changes he's seen over his lifetime during a climate change and resiliency roundtable with presidents and representatives of Northwest Alaska Tribal Government Councils at the Northwest Arctic Borough Chambers before President Obama's visit in Kotzebue on Wednesday, September 2, 2015. 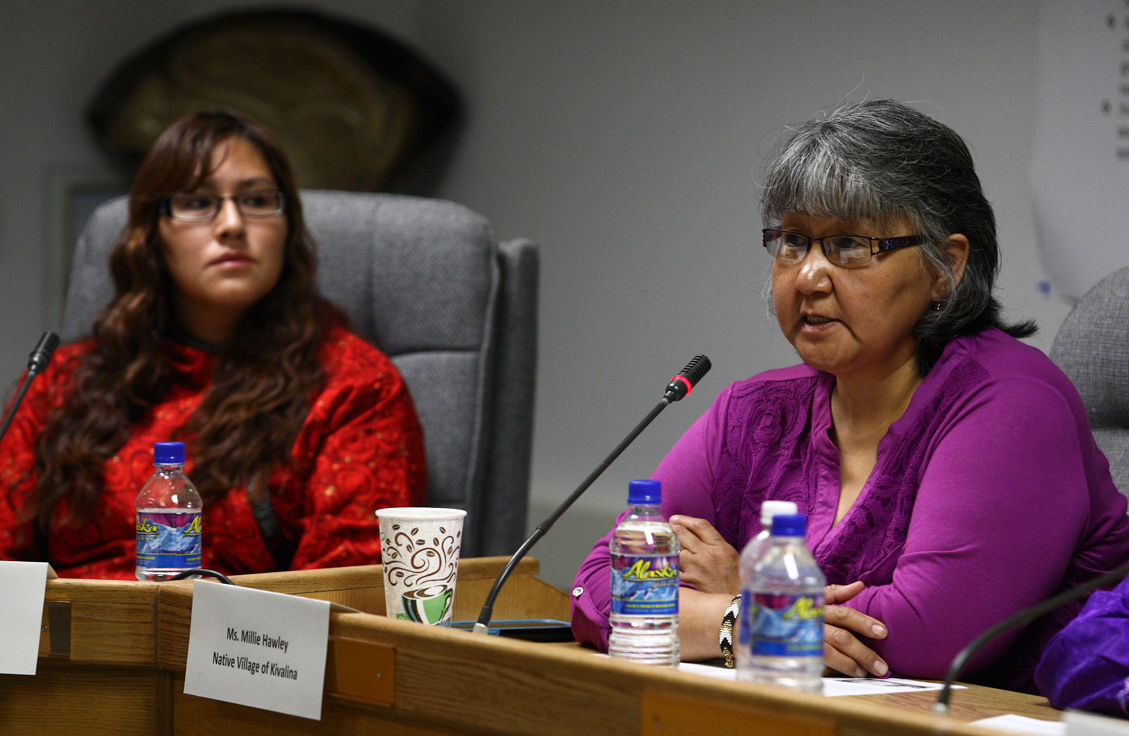 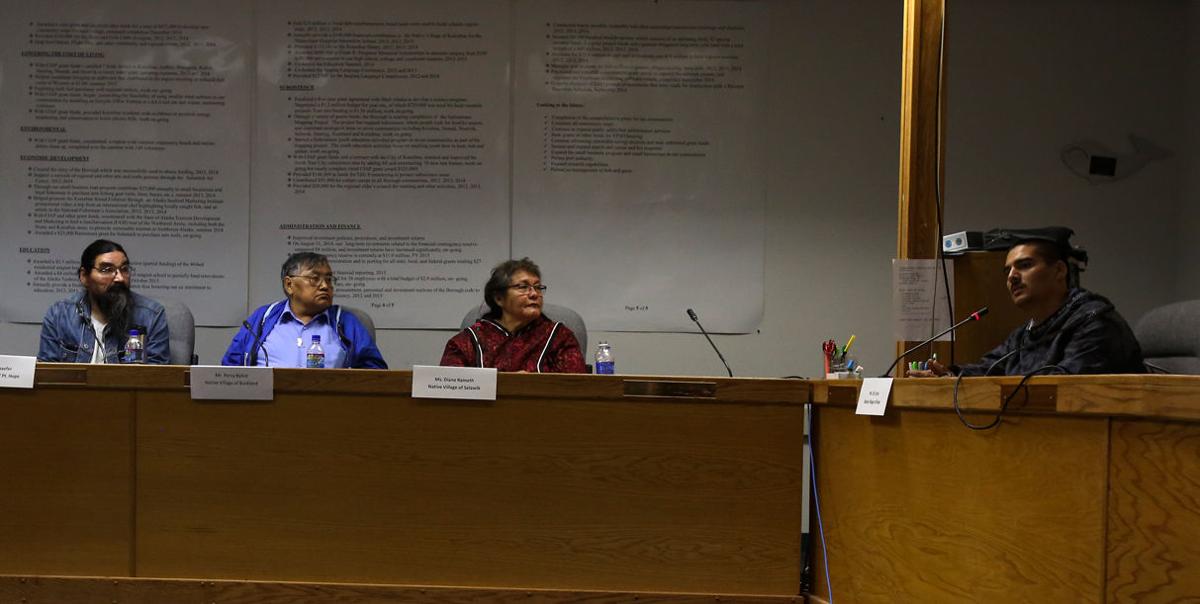 Jack Schaefer, President of the Native Village of Point Hope Indian Reorganization Act Council, third from left, speaks during a climate change and resiliency roundtable with presidents and representatives of Northwest Alaska Tribal Government Councils at the Northwest Arctic Borough Chambers before President Obama's visit in Kotzebue on Wednesday, September 2, 2015.

Dominic Ivanoff, Vice Chair of the Native Village of Kotzebue Indian Reorganization Act Council, speaks about changes he's seen over his lifetime during a climate change and resiliency roundtable with presidents and representatives of Northwest Alaska Tribal Government Councils at the Northwest Arctic Borough Chambers before President Obama's visit in Kotzebue on Wednesday, September 2, 2015.

KOTZEBUE—As utility crews hung U.S. and Alaska flags this morning along 3rd Avenue, the route President Barack Obama will take when he lands this afternoon, representatives from Northwest Alaska villages gathered to talk about how climate change has already been affecting their communities.

From eroding shorelines to changing and unpredictable animal migrations, the impacts, they said, have been happening for decades.

For many, the thinning and shifting sea ice has been one of the biggest concerns. In the winter, it's served as an important buffer for sea storms, but now that buffer isn't a strong.

Dominic Ivanoff, the 38-year-old vice chairman of the Kotzebue tribal government council, said the ice has changed significantly in his lifetime.

"I think that the ice is the biggest thing; the thickness of it. In the past when we went ice fishing in April, you had to have at least two 12-inch extensions on your ice auger to make sure you get through to the water; that's not the case anymore," he said. "One extension is enough and sometimes you don't need any.

"That's one example of climate change that I've seen in my life."

The decrease in ice, Ivanoff said, has led to difficulty in seal harvests with communities just getting a fraction of a fraction of what they would typically get in a year.

But the threats of climate change were most dire for Millie Hawley, the president of the Kivalina tribal government council.

Kivalina, a village of nearly 400 people northwest of Kotzebue, has been on the forefront of climate change. The sliver of land where Kivalina sits is expected to be under water by 2025.

"Our village has been talking about relocation for half a century," Hawley said. "But the reasons back then are different for the reasons today.

"Back then our population was growing and we needed space for new homes," she said. "Today it's different: The ocean storm surges have been eroding our island more rapidly ... and now we are talking about an evacuation route off the island."

Hawley said the village voted in 1992 to relocate about a mile and a half away, but the site was rejected because it too is expected to erode. Now, she said, the community doesn't have a site in mind.

"I've been asked 'Why don't you just move?,'" she said. "If you ask me to move to Anchorage or Fairbanks or another place where we are safe and have our lives, you're asking me to not be a people anymore. The land and the resources of our land identify who we are as a people."

Hawley said it's many peoples' desire to continue living in the Northwest Arctic, on the land that they and their ancestors have subsisted on.

"As hard as it is to live in our community, we love our home, we love the resources, we love the food that it provides—as little as it is getting today and as unpredictable as it is now—we love our home. That's who we are," she said. "It has made us a people and has given us an identity as a people. If we move on from there, then we're just visitors."

For some communities, the changing Arctic has brought new economic opportunities and jobs in the form of drilling and fishing, but for a community on the edge like Kivalina, Hawley said that's not much of an option.

"We don't have the luxury to even think of those," she said. "We want our people off the island in case of a storm. We can lose a home and we can lose land, but if we lose a life, that's the failure of all of the state to help us. The state and federal agencies will fail us as a community."

For many of the speakers, the affects of climate change, caused in large part by global carbon emissions and greenhouse gasses, feel personal.

Ely Cyrus, the president of the Kiana Traditional Council, said those who are contributing to the change should be held responsible.

"Other countries around the world not responsibility developing their resources are contributing to seawater rising, and global climate change is akin to coming to our shore with a bulldozer," he said. "I don't really think that the U.S. government would allow a foreign country to come in here and bulldoze the land to ruin our shores."

The news conference at the borough building in Kotzebue, featuring a dozen tribal leaders from communities within the Northwest Arctic Borough, came as Obama announced an array of policies and grants aimed at helping communities cope with climate change.

Among the 10-page announcement was a note about $2 million "to support voluntary relocation efforts, where appropriate, and other resilience strategies for vulnerable rural Alaskan communities."

When asked about the money, the representatives said they were thankful but politely said it wasn't close to enough.

"$2 million, we appreciate that, we really do. It's going to help us a little bit, but we need more than that," said Percy Ballot, the president of the Buckland tribal government council. "To move the Native village of Kivalina, it will be a lot more than that."

The talk of government funding struck a nerve for many of the speakers, who said that historically money that has been promised either arrives late, is less than expected, or doesn't come at all.

Ballot and others urged the federal and state government to work closely with Alaska Native associations, which have already been adapting to the changing climate.

"I really appreciate what the Denali (Commission) did over the years, but I think it needs to be more closer to home," he said. "Maniilaq (Association) and Northwest Arctic Borough, they know us better than anyone else. If it can't go straight to our villages, let's think about working with them."