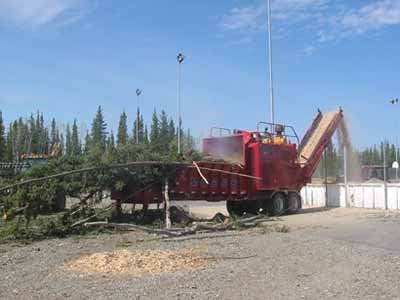 courtesy Alaska Department of Natural Resources Trees and slash are fed into a chopper during the summer to be turned into wood chips that will be burned in a boiler to heat the school in Tok. 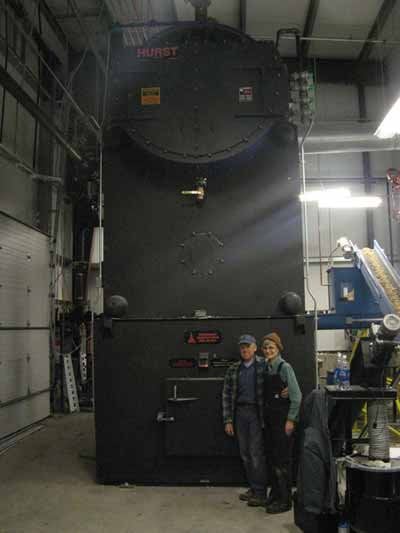 courtesy Alaska Department of Natural Resources A Tok couple stands next the biomass boiler that will heat Tok School.

courtesy Alaska Department of Natural Resources Trees and slash are fed into a chopper during the summer to be turned into wood chips that will be burned in a boiler to heat the school in Tok.

courtesy Alaska Department of Natural Resources A Tok couple stands next the biomass boiler that will heat Tok School.

FAIRBANKS — A new wood energy project in Tok has turned surrounding forests from a fire hazard into renewable fuel. The Tok School lit a new wood chip-fired boiler for the first time several weeks ago.

The 5.5-million-BTU steam boiler produces the school’s heat, saving the school district thousands of dollars in heating fuel and saving forest managers untold costs fighting fires and eliminating waste wood. The school district plans to add a steam turbine generator to the system in May to produce 75 percent of its electricity.

“We’re the first school in the state to be heated entirely by wood,” said project manager and assistant superintendent Scott MacManus, who has been trying to spur wood energy in Tok for 10 years. “As far as I know, we’d be the first public school in the country to produce heat and power from biomass.”

At the school’s new biomass facility, trees and slash are fed into a Rotochopper grinder, processed into chips that resemble wood shavings, spit into a bin and carried by conveyor belt into the boiler, which is 17 feet tall, 6 feet wide and 12 feet long. Fuel comes from forest thinning projects, scraps and nearby sawmills.

The forest around the school has yielded enough biomass for the first year, according to Alaska Division of Forestry spokeswoman Maggie Rogers. Project leaders hope the system will be used as a model of energy independence for other school districts, communities and utilities.

The project was a partnership between the Division of Forestry, the Tok community, the Alaska Gateway School District and the Alaska Energy Authority and used research from University of Alaska Fairbanks and elsewhere. Funding came from a $3.2 million state renewable-energy grant as well as about $750,000 in grants from the Alaska Legislature. A long-term fuel contract is in the works between the state and the school district.

The project started nearly four years ago as a way to get rid of wood from forest-thinning projects and lessen fire danger. Tok is prone to wildfire because it sits amid 40,000 acres of continuous fuel. In the past 25 years, nearly 2 million acres in the area have burned, costing more than $60 million for fire suppression and causing six evacuations, according to the state. Last year, the Eagle Trail fire scorched 18,000 acres.

“The fire history in Tok has basically demonstrated that Tok is going to burn unless we take action,” said Jeff Hermanns, Tok area forester and a spearhead of the boiler project.

A recent wildfire protection plan recommended that 3,000 acres of black and white spruce forest in Tok be removed to make the community safer, including an area around the school, Hermanns said. Foresters usually try to sell or repurpose good wood, but the trees were junk wood, he said.

“Most of them aren’t any bigger than three inches. Most people won’t cut that tree for firewood. It’s too small. You can’t sell board out of it,” Hermanns said.

Foresters thinned 100 acres of trees around the school and stacked them into decks. Then they set them on fire, a pricey and smoky last resort.

“All of those BTUs, all of that energy, just went up in smoke,” Hermanns said. “By the school using this material, it’s saving me a minimum of $1,000 an acre.”

Sending timber to the grinder is cheaper because foresters don’t have to hand-limb every 3-inch tree, as with other treatments.

It’s also cleaner than burning the decks because the boiler emits no smoke and little pollution. The carbon emitted by the boiler is offset by the carbon absorbed during the life of the tree.

“The beauty of it all is that it grows back. It’s carbon neutral and our foresters can finally manage our forest,” said Dave Stancliff, vice president of the Tok Chamber of Commerce and partner in the project.

“Would you rather burn it in a really high-efficiency boiler that doesn’t emit any smoke versus an uncontrolled burn in wildfire, where it’s causing serious health issues and it’s an emergency situation?” Hermanns said.

The boiler should burn 40 acres worth of wood per year, using only one-third of the area foresters want to clear in the boiler’s 30-year life span.

Hermanns and MacManus decided on a wood chip model because it best fit the fuel source.

“You have to go out and determine what your fuel is, and then design your project around it,” said Hermanns.

The grinder was key.

“It effectively turns a large volume of these non-merchantable, scrawny little spruce trees, these hazardous fuels, into usable fuels,” he said.

The grinder processes up to 40 trees at once. You don’t need to dry, trim or treat the wood before burning it.

“It’s what we call gut, feathers and all. You put the whole bird in the soup,” Hermanns said.

The boiler is supposed to be as clean as burning heating fuel, and the school district will monitor its emissions. It burns at 2,000 degrees Fahrenheit and generates very little smoke, thanks to air that moves up through the wood chips and fans the flame.

Any smoke is removed by an electrostatic precipitator, which electronically charges smoke particles out of the exhaust.

“If you look at the stack today, all you would see is steam,” Hermanns said.

The boiler system, designed by German engineers, is a proven technology. More than 100 are operating around the country. It was designed to meet any air quality regulations Tok could see in the next 20 years (Tok has none now).

Tok School spends more than $300,0000 annually on heating fuel and electricity, said school district superintendent Todd Poage. The boiler will save an estimated $125,000 per year on fuel, and the generator will further erode their bill.

The savings will go toward music and counseling programs, student activity funding, teacher training and other programs throughout the district, Poage said.

Students have been learning about fire science through the forest thinning and boiler projects and will visit the biomass facility when it is completed.

Administrators hope the project will inspire other communities in the district and the state to take advantage of local resources.

“This is a model I think that could be used in a lot of different villages,” said assistant superintendent MacManus, who grew up in Ambler, a village outside of Kotzebue, where heating fuel runs $9 per gallon. “A lot of villages, Fort Yukon, McGrath, Galena, have access to biomass. Those communities should be able to heat themselves.”

“That’s the beauty of this. This system utilized a product that there is no use for in the Interior,” Hermanns said.

The group is planning an open house for school districts, state legislators, tribal organizations and others who are interested in early January.