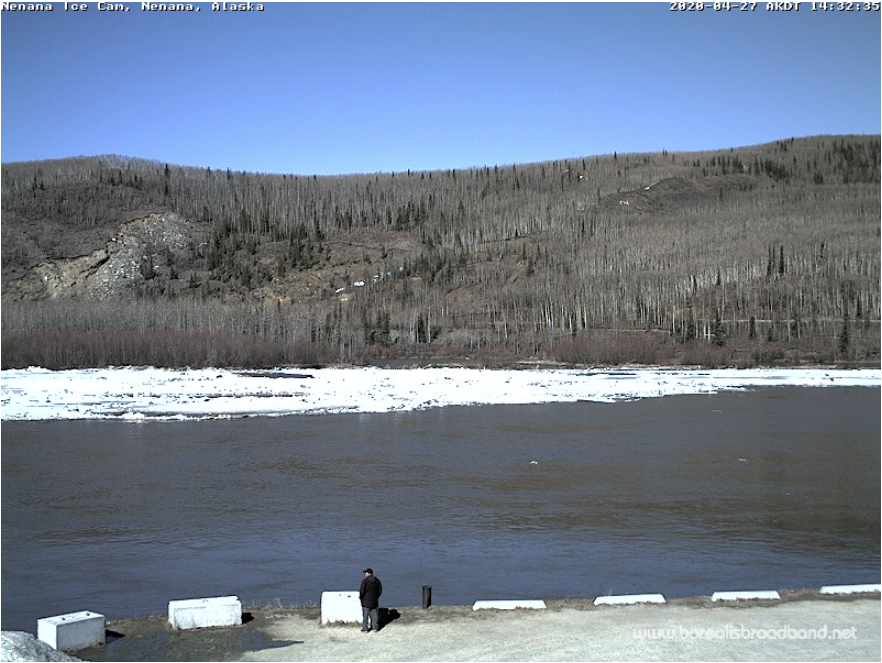 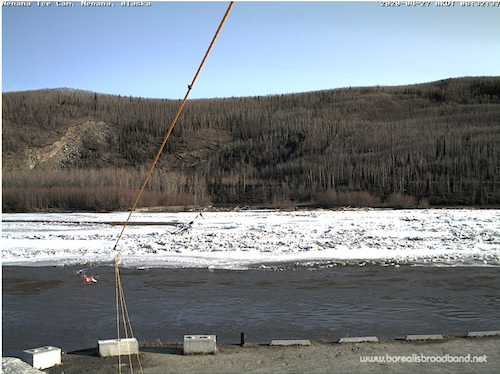 The Nenana Ice Classic tripod on the Tanana River is tipped, but intact as of 8:30 a.m. Monday, April 27. Screenshot from nenanaakiceclassic.com

The Nenana Ice Classic tripod on the Tanana River is tipped, but intact as of 8:30 a.m. Monday, April 27. Screenshot from nenanaakiceclassic.com

According to Nenana Ice Classic Manager Cherrie Forness, who was down by the river, there was quite a crowd of spectators to bear witness to the tripod’s fall.

“The whole river bank was filled up with cars and people,” she said. “It was like that yesterday too.”

On Sunday, the tripod took a major knock after a flurry of ice came down the river, opening a large lead near the shore. The tripod, however, didn’t fall entirely, and throughout Monday morning it remained standing, albeit leaning precariously, amid a jumble of ice in the center of the river.

Eventually, Forness said, a large piece of ice came down the river and caught the wire, pulling the tripod in.

According to climatologist Rick Thoman, between 1917 and 1989, the ice went out this early only three times. Since 1990, this is the 11th earliest that the tripod has fallen in.

The Ice Classic is the annual guessing game for when the Tanana River ice will break up in the city of Nenana. The tradition was started in 1917 by railroad workers eager for the ice to break so they could get back to work. Red-colored cans are distributed around the state from Feb. 1, and people can guess the exact month, day, hour and minute that the ice will go out (in Alaska Standard Time, a tradition for the contest.) In 2019, the sole winning guess won $311,652. Oftentimes there are multiple winners, who then split the pot.

This year, amid the coronavirus outbreak, people had an extra five days to guess when the ice would go out, which meant the last guesses were made April 10.

A portion of Ice Classic proceeds go to local charities. Each year, the Ice Classic provides donations of about $500 to $1,000 to nearby nonprofit groups. Though many of the events and charities the Ice Classic donates to are located in Nenana, the organization accepts applications from other surrounding towns as well.

Forness said she and her team expect to determine the jackpot amount by Friday morning. She said it may take about four weeks before the winner or winners are contacted, because she is working with a skeleton crew as a result of the ongoing coronavirus outbreak.

“We’re not starting the process of tickets until Thursday. We haven’t been able to yet because of COVID-19. Now we’re at a point where we can, but we don’t have a full crew,” she said, adding that they will be working in shifts to limit the numbers of people in one place. “We’re running a skeleton crew because of the numbers of people we’re allowed to have. We have to keep everyone minimum six feet apart and all that.”

Forness also noted that there were far fewer tickets sold for the Nenana Ice Classic this year compared with previous years.

“It’s probably the lowest number of tickets we’ve sold in quite some time,” Forness said. “Usually people wait until the last two or three weeks to buy tickets. By that time we were already in lockdown.”

While that will speed up the process of determining the winners, it also means the jackpot “won’t be a record,” Forness said.

“I hope people can be patient while we go through this process. Our hands were tied like everyone else’s,” she said.