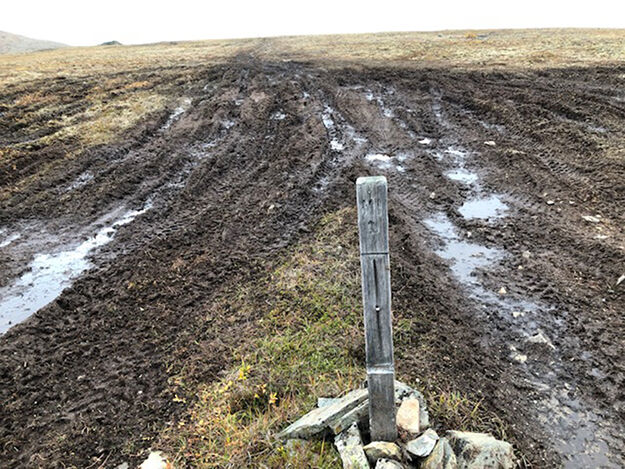 A trail marker on the Pinnell Mountain Trail is seen. The trail is battling use between hunters, who harvest caribou in the area, and hikers, who report abandoned animal carcasses and turned up earth from all-terrain vehicle activity. Courtesy Karen Brewster 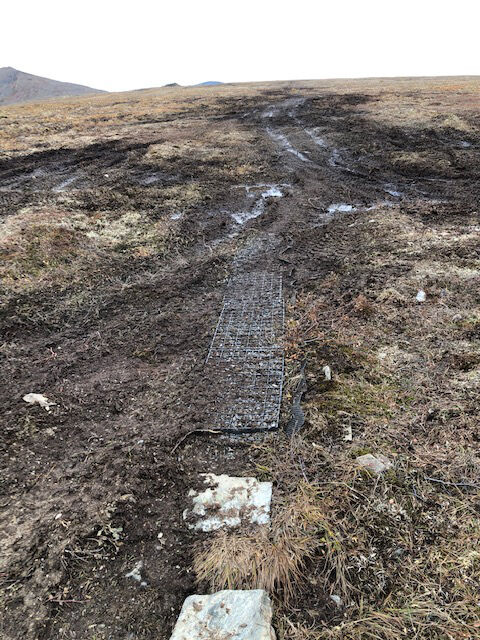 Bureau of Land Management had placed plastic grating filled with gravel along the wetter parts of the trails, which have allowed hikers an easier time walking across boggy areas. Those grates have been driven across and buried in mud. Courtesy Karen Brewster 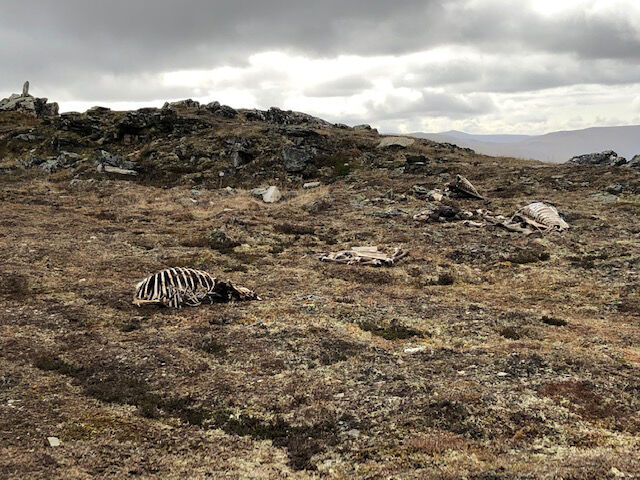 A trail marker on the Pinnell Mountain Trail is seen. The trail is battling use between hunters, who harvest caribou in the area, and hikers, who report abandoned animal carcasses and turned up earth from all-terrain vehicle activity. Courtesy Karen Brewster

Bureau of Land Management had placed plastic grating filled with gravel along the wetter parts of the trails, which have allowed hikers an easier time walking across boggy areas. Those grates have been driven across and buried in mud. Courtesy Karen Brewster

The Eagle Summit area in the White Mountains north of Fairbanks has become another area of harsh juxtaposition between Interior land user priorities, with some hunters using state land to harvest caribou and some hikers filing reports of foot trails littered with leftover carcasses and destroyed by four-wheeler ruts that cut across the nearby tundra.

The Pinnell Mountain Trail, a nationally recognized backpacking route, cuts across Eagle Summit and is managed by the Bureau of Land Management.

Teri Balser, an interpretive park ranger with the BLM’s Eastern Interior Field Office, said officials had heard a number of reports from hikers in the area whose photos show calf-deep ATV ruts, mud pits and destruction of last summer’s work to mend some of the boggier areas of the trail.

The easy road access to this particular zone of the hunt and the increased harvest allowance caused some inexperienced hunters to flock to the area and leave a mess, said Alaska Outdoor Council Executive Director Rod Arno, who has received reports of some of the trail damage along with animal remains scattered near the trails.

“It’s kind of the thing that we’ve seen throughout Alaska’s history. When there’s a public announcement that there’s a large amount of caribou that are road accessible, that attracts people who are not seasoned outdoorsmen or hunters,” he said. “It increases the amount of interest. A lot of folks went out and went hunting with very little experience.”

“Devastation is an understatement,” he said of the trail wreckage. “The aesthetic is completely gone.”

Not all the trail damage occurred this year, the BLM’s Balser noted, explaining that a “pretty egregious” ATV path cut across and damaged an entire system of switchbacks during last year’s caribou hunt.

This year the BLM took time to place warning signs instructing hunters and ATV users to stay off the hiking trails when using vehicles.

Many of these signs were ignored and as much as mile-long stretches of the trail have been littered with ruts that cut deep into the mud and leave the trail relatively unusable.

The BLM had placed plastic grating filled in with gravel, called Geoblock, across some of the wetter parts of the hiking path over the last few years to allow backpackers and hikers to easily walk across the boggy areas. Many of those grates were driven across and buried in feet of mud.

“We just hoped that people would be respectful of that infrastructure,” Balser said. “It’s really unfortunate. Significant volunteer hours were put in there, plus hours from paid staff, and we’ll have to redo a lot of it.”

There will be some restoration effort, but it will take a long time.

The littering of animal remains along the path creates not only additional eyesores but presents a danger to hikers in the area, Delamere said.

“Starting at mile 3, you come down a steep switchback down into a saddle. I got a unmistakable whiff of rotting carcass,” he said. “Then when you get to mile 2, I found at least half a dozen carcasses on the trail.”

Another hiker, Karen Brewster, said she turned around Saturday after walking across an esophagus left on the trail.

“There are gut piles, there are whole skeletons, with feet still attached,” she said. “We turned around after about two miles because we were so sickened by it.”

Balser noted the hazards related to leaving guts and carcasses around recreational trails in bear country.

Not only that, Arno agreed, but it also gives responsible hunters a bad name.

“Those folks now have an opportunity to learn and improve, now that they’ve been out there and done such a poor job. We want more hunters to be good conservatives and respect the land,” he said.

Regulating situations like this can be difficult when different parts of the area are governed by three different agencies.

Balser noted all the BLM can do is post signs and hope people pay attention.

Similarly, all that Fish and Game can do is advise hunters to participate in the hunt in a responsible way.

“We always tell hunters they need to abide by the land management agency rules and regulations and that the Pinnell Mountain Trail is governed by the BLM,” said Fish and Game Management Coordinator Doreen Parker McNeill. “The BLM has reached out to me in the past regarding enforcing the BLM federal regs, and we’ve been trying to work with that, but that’s something the BLM needs to make sure is known in the area.

“We can inform hunters to pay attention, but that’s as far as Fish and Game can go,” she said.

Parker McNeill had heard complaints about trails, some on state land that is hard to regulate, and some on BLM lands.

Alaska State Troopers spokeswoman Megan Peters said troopers will get involved if there are cases of illegal waste of an animal but that regulating trails is difficult.

“We have had several complaints of wasted carcasses, which we have looked into. One of these cases resulted in charges that are still pending court. That case occurred at Eagle Summit. We had some other cases that did not have suspects or investigative leads,” Peters wrote in an email the Daily News-Miner on Wednesday.

Peters estimated that the level of animal waste is not unusually high this year despite the expanded hunt.

“Because of the concentrated nature of the hunt, we often see quite a few caribou that do not get salvaged,” she wrote. “That is not to say that all of them are intentionally wasted by hunters.”

The caribou hunt in the area closed last week, and Balser said some restoration of the area will likely begin before snow falls.