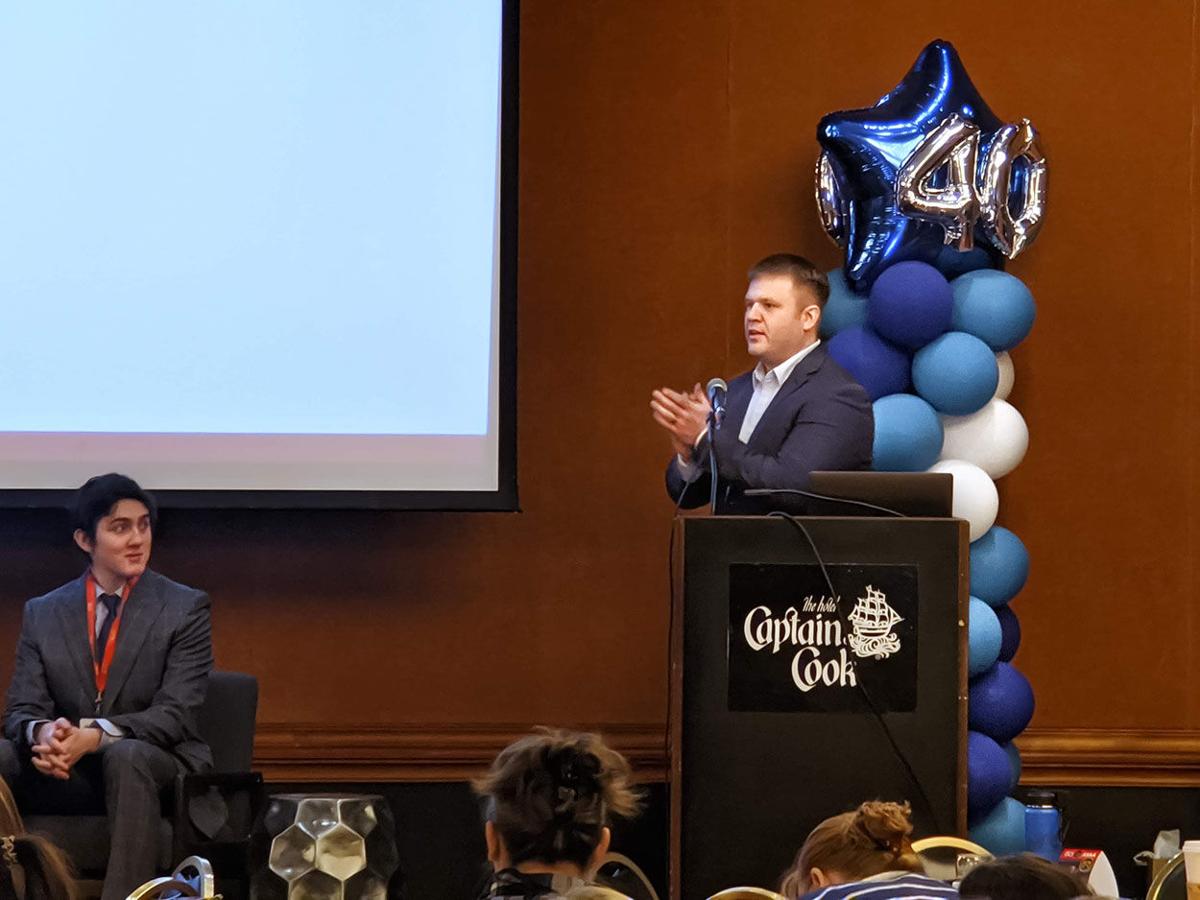 Luke Meinert is seen at the Alaska Society for Technology in Education conference last year where he facilitated an Esports panel. Courtesy Luke Meinert 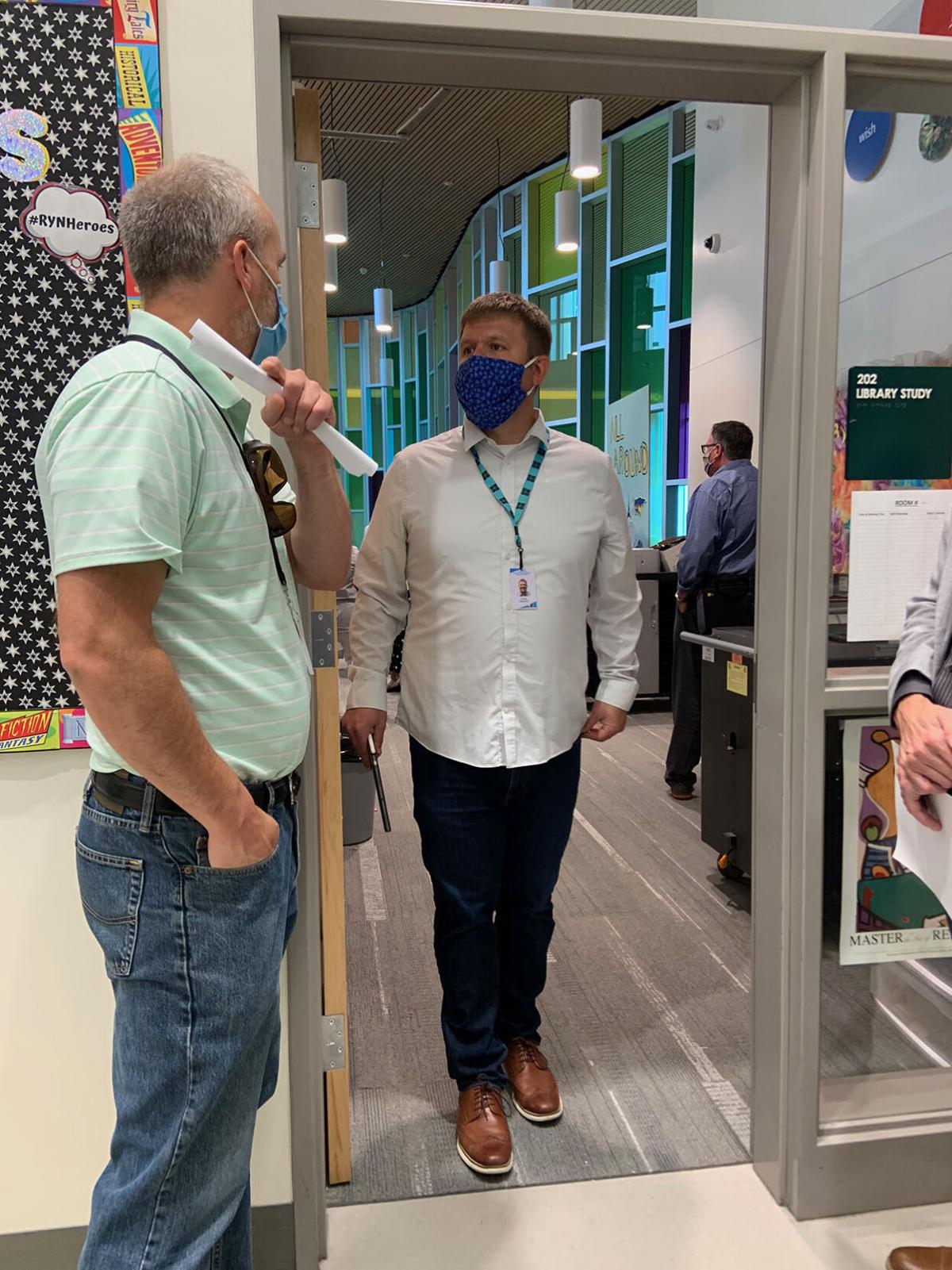 Luke Meinert is seen at the Alaska Society for Technology in Education conference last year where he facilitated an Esports panel. Courtesy Luke Meinert

Luke Meinert is the new guy in the upper echelons of the Fairbanks North Star Borough School District administration.

The 38-year-old assistant superintendent for secondary education made his mark in education circles by getting Esports sanctioned by the Alaska Students Activities Association as an extracurricular activity.

He is from Davenport, Iowa, and was the first in his family to leave the area when he began his career in education in the Aleutian Islands in 2005.

He didn’t want to pursue the family trade. He wanted to be a lawyer. And then he taught skiing to preschoolers.

“It was amazing to see their progress,” he said. “I found I really loved working with students.”

Meinert started with the school district in May, taking over for Shaun Kraska, who retired.

His days have been consumed with COVID-19 mitigation planning.

Meinert is the person tagged in to speak during school board meetings on the topic of extracurricular activities, which have been taking place despite academics being in remote status.

When will students return to schools for classes? Meinert said he gets asked that a lot.

He doesn’t know, he said. What he has learned is that this school year is characterized by the need to adapt, he said.

“The pandemic is completely unpredictable.”

Meinert spent five years in the classroom at a small school of 100 students in Sand Point before taking a central district office job.

He wore many hats including technology, curriculum and activities directors.

“That’s one of the beautiful things about working in rural districts is you get exposure to lots of different administrative roles,” he said.

In 2012, Meinert moved to Fairbanks after becoming technology director for the Yukon-Koyukuk School District, which is headquartered here. He was later promoted to assistant superintendent.

Meinert was eager to join the administration team at the Fairbanks school district in part because his children will attend schools here.

“I wanted to have the experience of working for a larger district,” he added.

He’d like to see the district continue to build a more robust homeschool program, he said.

Working for rural school districts provided Meinert with a lot of experience in distance learning, he said.

“I found that I really was interested in distance learning models and trying to help improve them,” he said.

Meinert described his approach to discipline as “restorative justice,” which involves resolution through bringing offenders and victims together, sometimes with the wider community.

“We’re not just trying to punish kids or kick them out of school, which really doesn’t work,” Meinert said.

He said it’s important to get to the root cause of misbehavior and to be fair.

The husband and father of two said the people he admires most are his parents for making sacrifices so he could participate in extracurricular activities growing up. They also helped put him through college.

He said one of his proudest accomplishments is meeting and marrying his wife, who is a teacher.

He is also proud to have worked with the student activities association to create the statewide Esports program.

Over 500 colleges and universities have Esports programs, he said, and there are scholarships.

“It lends itself to attracting a whole group of kids that aren’t really involved in any other high school activity,” Meinert said.

Students who participate in afterschool activities tend to have a higher graduation rate, he added.

Hundreds of Alaska students are involved in Esports as a school activity, he said.

It’s gratifying to watch students be recognized for their talents who might otherwise go unnoticed, Meinert said.

“It’s awesome for them being celebrated in the school community for the skills that they have.”

One of Meinert’s best days on the job so far was his first school visits, he said.

Another great day was a Saturday a few weeks ago when he attended high school volleyball and cross country events followed by a football game.

“I get a lot of energy for being around people,” he said.

If students learn anything from Meinert, he hopes that they learn to be compassionate, ambitious and adventurous.

Meinert said that he read that students graduating these days will have at least 11 careers in their lifetime.