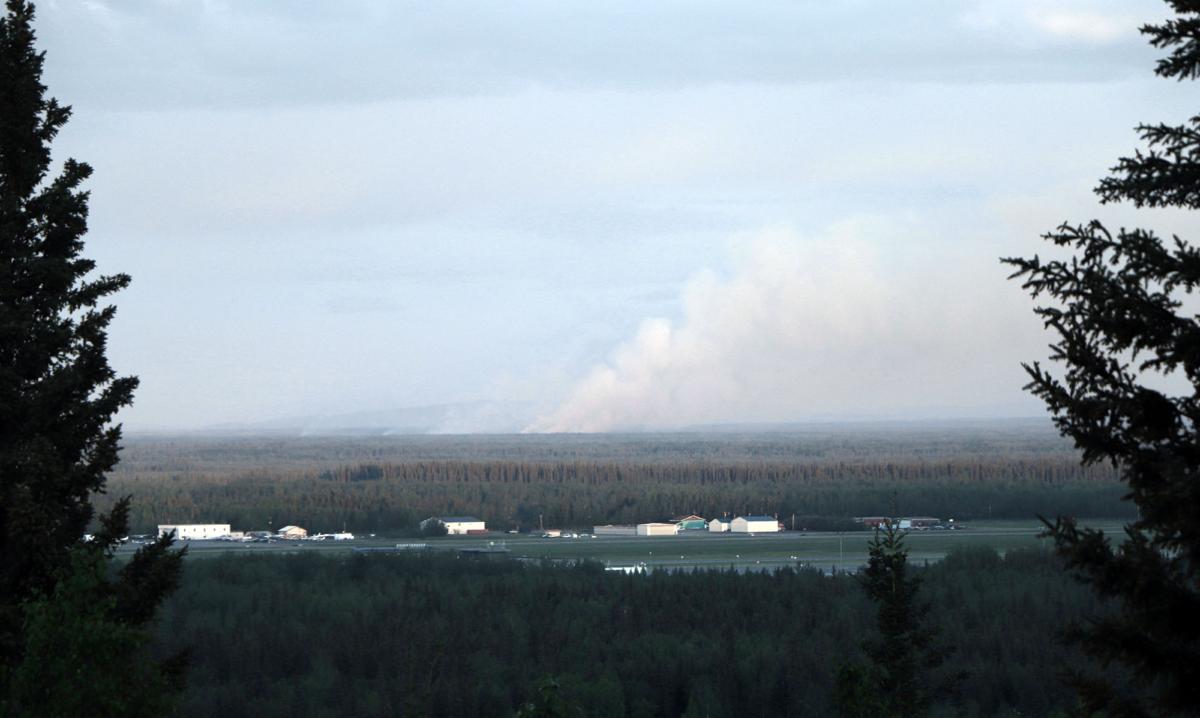 View of the Clear Creek fire south of Fairbanks from Chena Ridge at 11:15 p.m. Sunday with Fairbanks International Airport in the foreground. Photo courtesy of Rod Combellick, Fairbanks 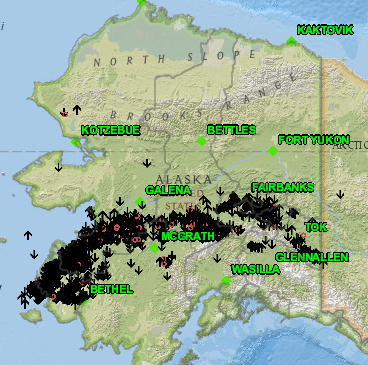 A map shows the location of the more than 2,000 lightning strikes recorded on Sunday. Courtesy Bureau of Land Management Alaska Fire Service.

View of the Clear Creek fire south of Fairbanks from Chena Ridge at 11:15 p.m. Sunday with Fairbanks International Airport in the foreground. Photo courtesy of Rod Combellick, Fairbanks

A map shows the location of the more than 2,000 lightning strikes recorded on Sunday. Courtesy Bureau of Land Management Alaska Fire Service.

Updated 5:39 p.m.: Lightning is suspected to have caused at least 23 new fires in Alaska this weekend, including one about 9 miles south of Fairbanks, according to the Bureau of Land Management Alaska Fire Service.

According to the service, there were approximately 1,860 recorded lightning strikes throughout the state on Saturday and an additional 2,900 by 8 p.m. Sunday.

Thunderstorms rolled across the state over the weekend, starting around the Yukon-Kuskokwim Delta, just north of Bethel, heading across the central Interior, and then through the Fairbanks area on Sunday afternoon. In total, there was 4,100 acres of large fire growth over the weekend, according to the Alaska Interagency Coordination Center.

According to a news release, the Alaska Fire Service is keeping an eye on the Clear Creek Fire, a lightning-caused fire burning in the Tanana Flats Training Area about 9 miles south of Fairbanks. The agency received a number of reports of smoke from the fire burning on Army lands Sunday.

Fire Service crews that were over the area on Sunday for a training mission initially reported the as 15 to 20 acres. Later in the day, another reconnaissance aircraft reported the fire as roughly 90 acres. The fire has a moderate spread potential and will continue to be monitored via aircraft.

According to Ipsen, the Clear Creek fire is burning in an area that is off limits to the public, so the agency is not currently planning to send in crews to fight the blaze.

“It’s used for military training and there’s possibly unexploded ordnance on the ground, so we’re not going to be able to actively suppress it, because that will put people in danger.”

The fire is relatively small in size and is not currently a threat to anything, but if it does spread close to infrastructure, the division may decide to move firefighters into the area.

“As of now, that is not the case,” Ipsen said. “We can’t use the water-dropping aircraft, because they have to fly low and close to the ground and if they drop water on an unexploded ordnance, that could be catastrophic.”

Crews will be flying over the fire later today. Ipsen said there could be other lightning-caused fires across the Interior that have not yet been reported. She added, however, that with plenty of rain forecast over the next couple of days, no serious wildland fires are anticipated to develop this week.

Crews were busy over the weekend dealing with a number of lightning-caused fires, including two within 25 miles of Unalakleet.

Eight smokejumpers and two water-scooping aircraft were dispatched to the Chiroskey River Fire outside Unalakleet, shortly after arriving in Galena, at about noon Sunday. The fire was reported by an Unalakleet resident shortly after 10 a.m. and there are Alaska Native allotments nearby and a cabin within 5 miles. The fire area received a little bit of rain Sunday, which boosted efforts to stop it from growing larger than the estimated 64 acres Sunday night.

Meanwhile, eight smokejumpers were wrapping things up Sunday on North Fork Fire 15 miles northeast of Unalakleet. The smokejumpers mobilized Saturday evening and worked into the early morning hours to stop it from growing larger than 10 acres. The North Fork Fire was reported by Alaska Fire Service personnel aboard a surveillance aircraft shortly after 9 p.m. Smokejumpers were expecting to have the fire contained Sunday night and to demobilize today.