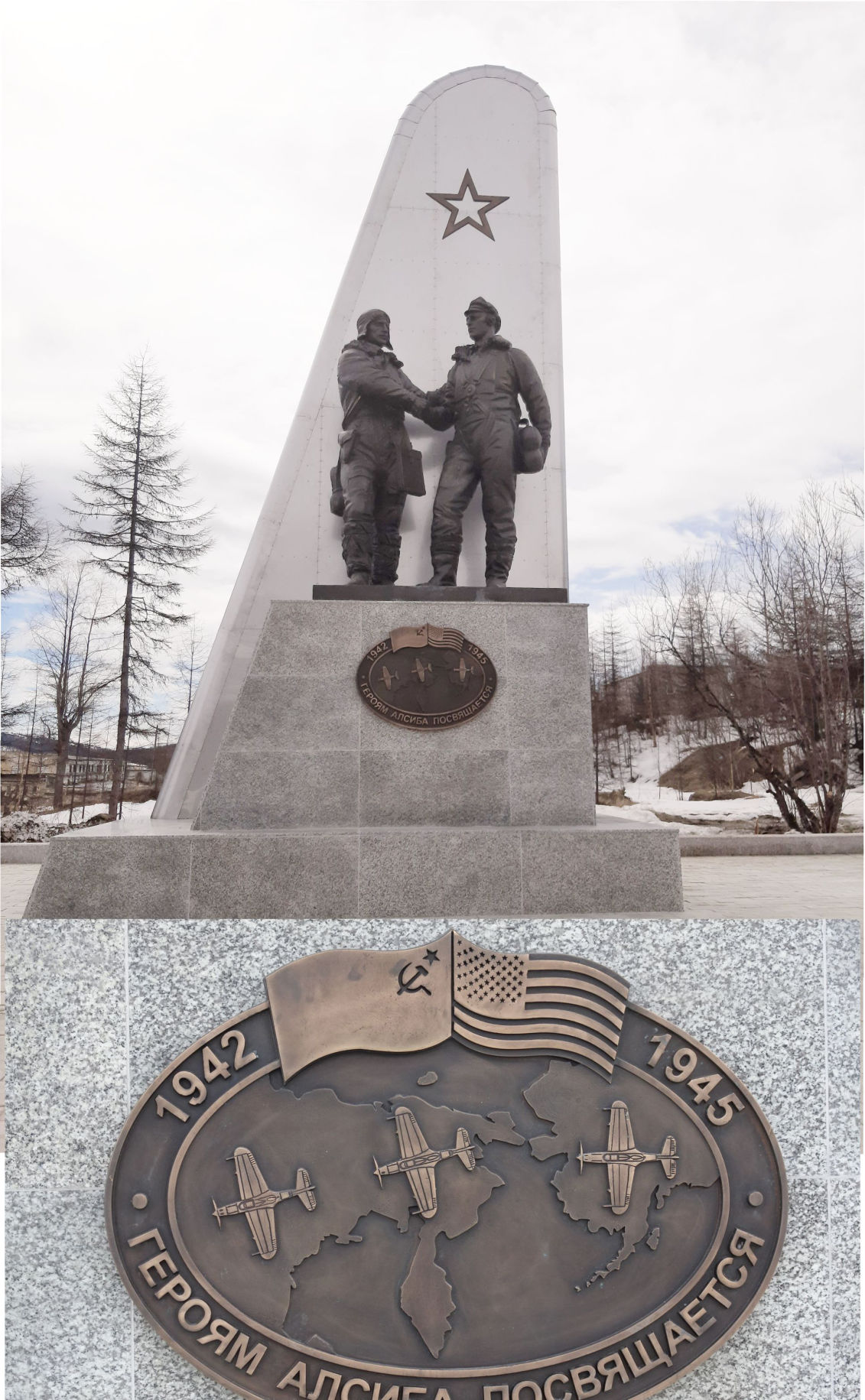 The Magadan Lend Lease Memorial, which was unveiled May 9. Courtesy Nikolay Goryachev 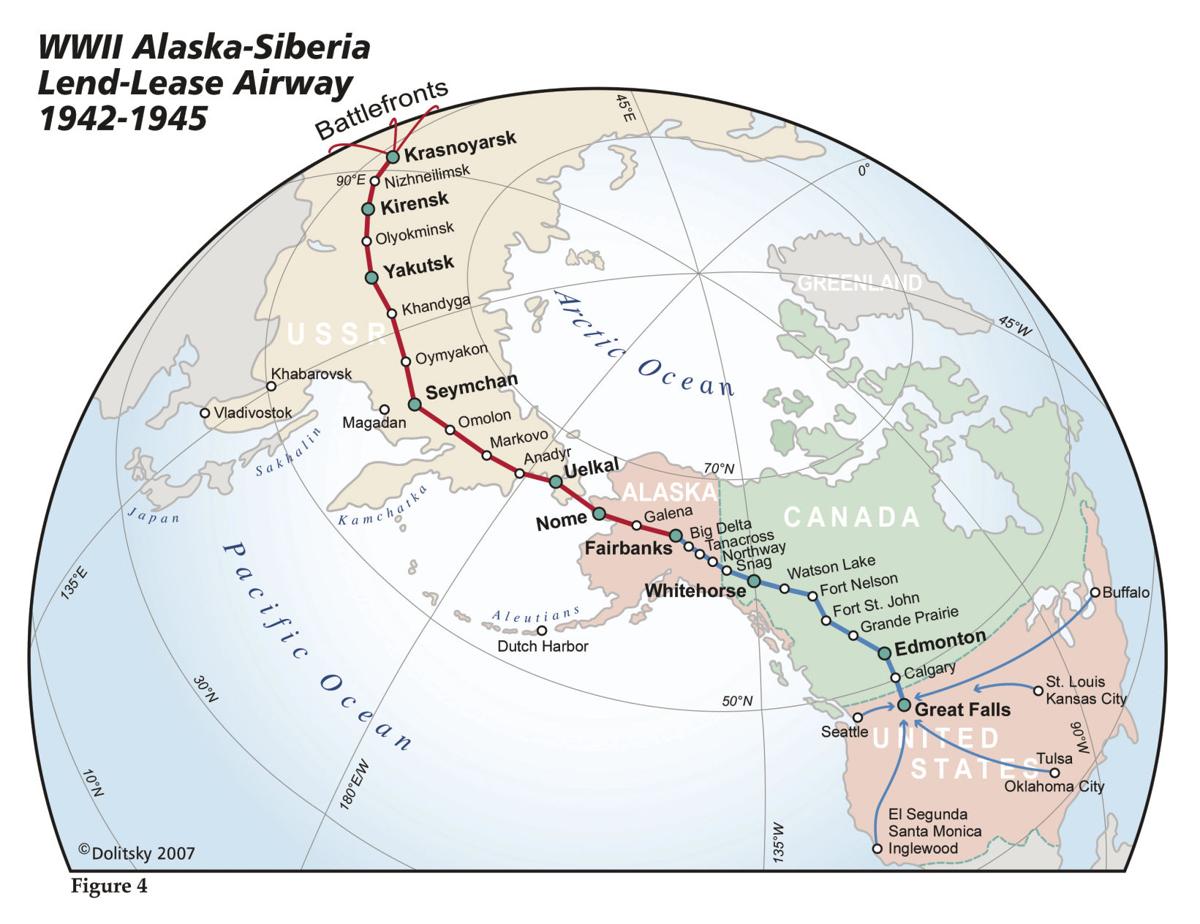 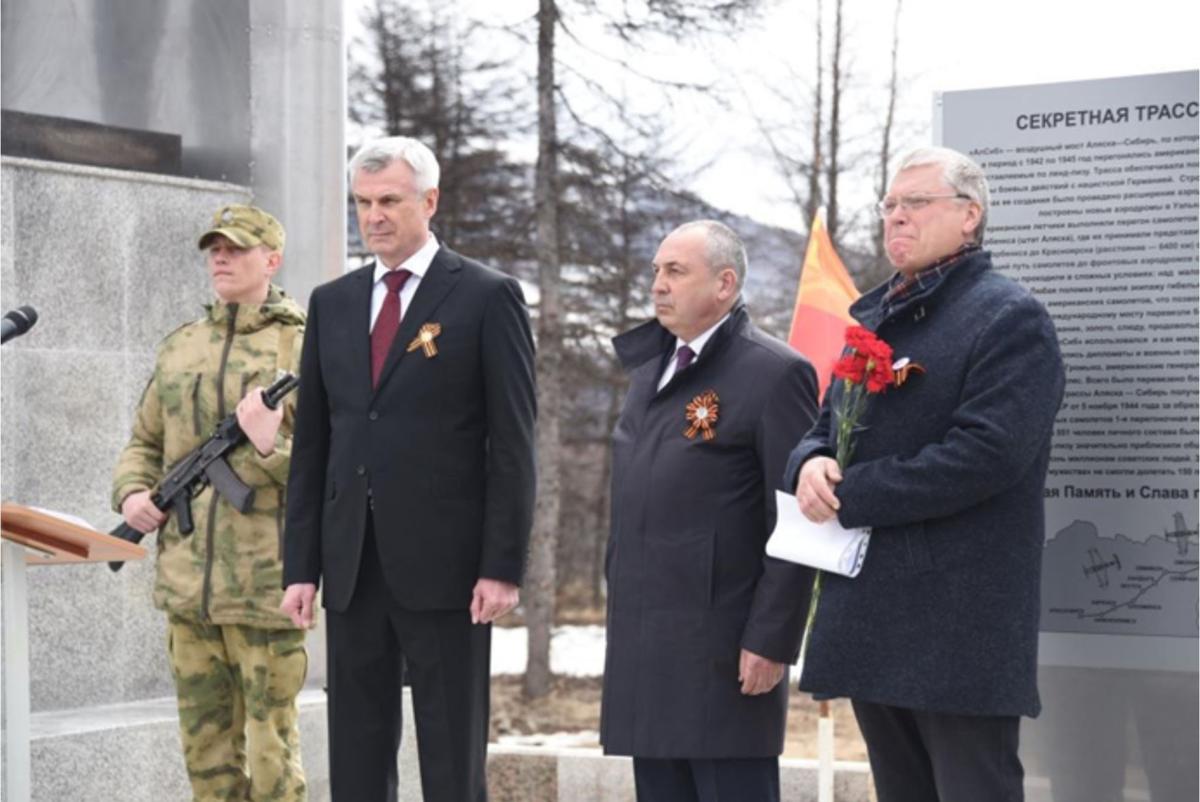 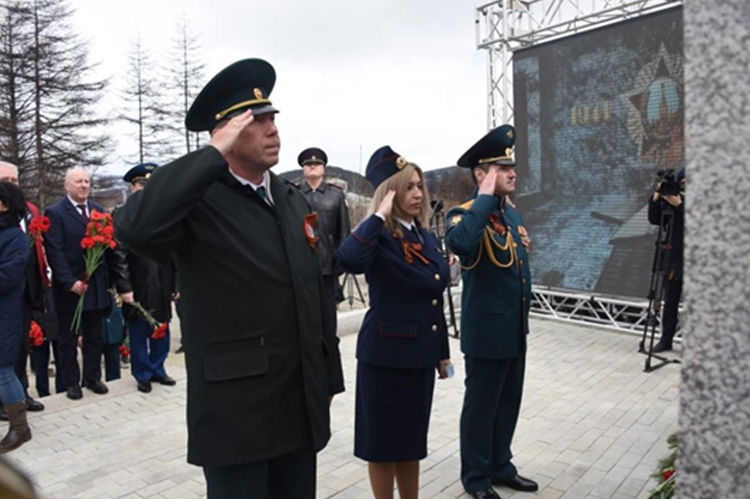 Members of the military salute during the opening ceremony of the new Magadan Lend Lease Memorial. Courtesy Valery Ostrikov 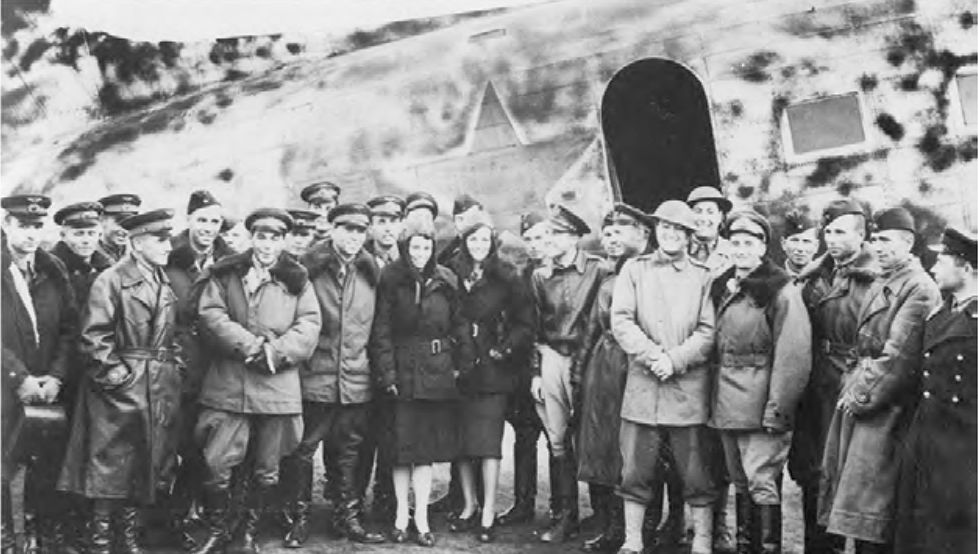 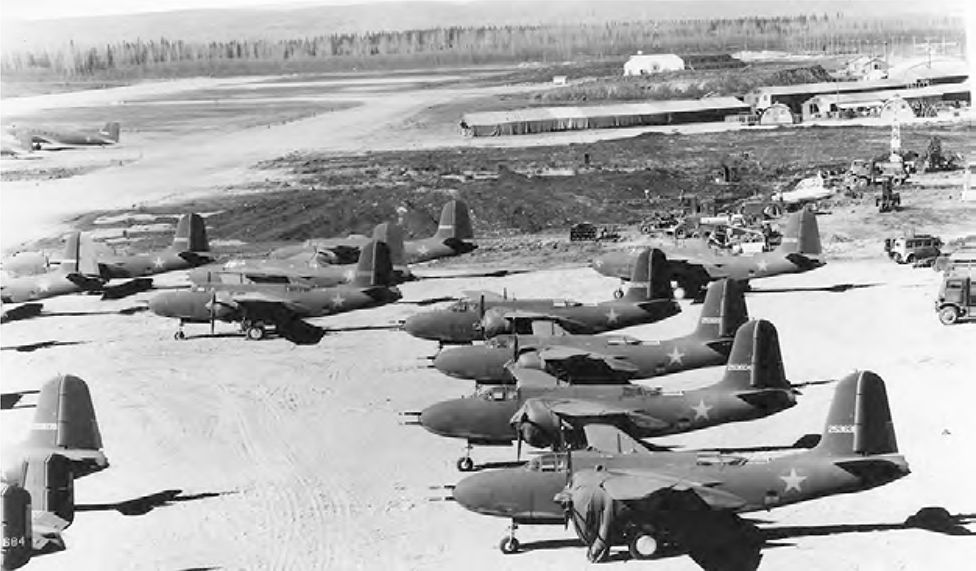 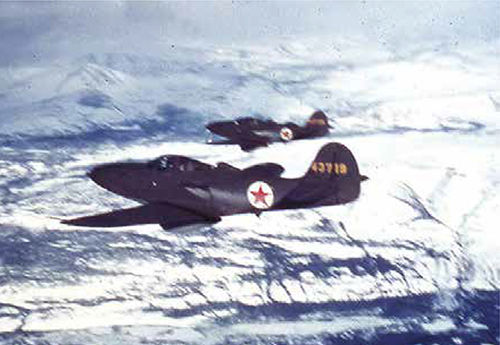 A pair of Lend-Lease Bell P-39Q-20s en route to Fairbanks over the Northwest Route, in March, 1944. Courtesy Alexander Dolitsky 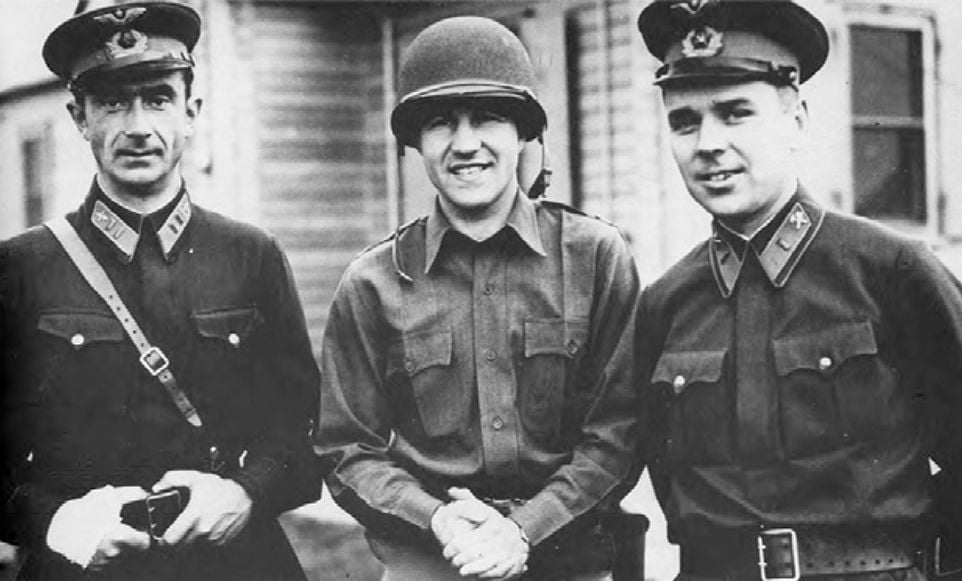 Soviet and American pilots at Nome, in 1942. Courtesy Alexander Dolitsky 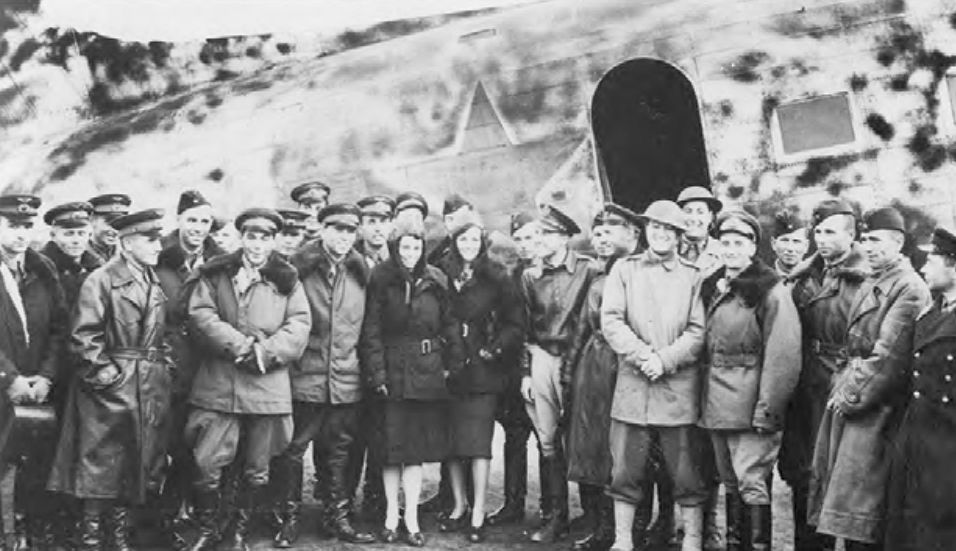 Soviet military mission arrives in Nome, on September 3, 1942. The soldiers in helmets and the officer in riding breeches are Americans; the rest are Soviets. Courtesy Alexander Dolitsky 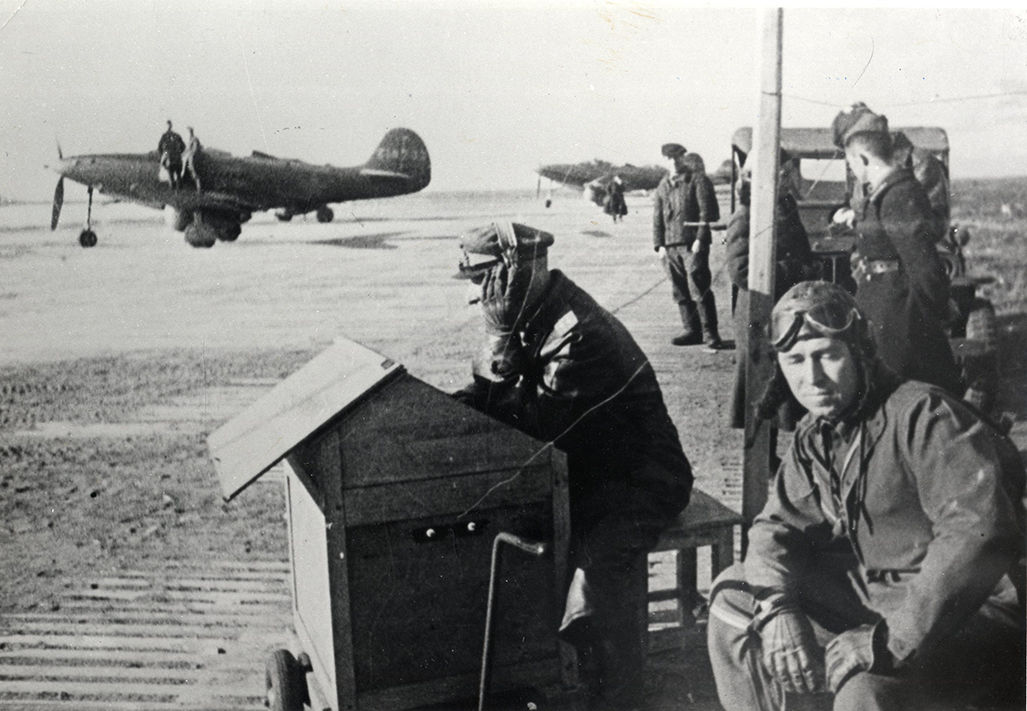 On May 9, a small group of locals gathered at the Lend-Lease Memorial in downtown Fairbanks to celebrate VE Day, marking 75 years since the end of World War II. The statue depicts two World War II pilots — one Russian, one American — standing in front of an aircraft propeller. Present at the ceremony was a representative of the Russian Cultural Center, who placed a wreath from the Russia Embassy in front of the memorial.

That same day, a small crowd gathered in Magadan, Russia, for the unveiling of a new monument honoring the Lend-Lease program. Both Fairbanks and Magadan played key roles in the program, which saw the transportation of nearly 8,000 aircraft from America to its then-ally Russia for use on the war’s eastern front.

The aircraft were delivered under an agreement that was part of the Lend-Lease Act, which was proposed during the Roosevelt administration and passed into law by Congress in 1941. It provided, not only aircraft but also ammunition, clothes, and other supplies to Russia, with the intention of preventing the war from moving further east.

Following construction in the Lower 48, the aircraft were flown by America’s first women military pilots to Great Falls, Montana. The 7th Ferrying Group then flew the aircraft through Canada to Fairbanks, where Russian pilots would take the reins. The Alaska-Siberia Air Route was in operation between 1942 and 1945, during which around 300 Russian pilots flew planes from Ladd Field, now Fort Wainwright, over the Bering Strait to Russia.

Flying conditions for pilots along the route were often treacherous. According to Alexander B. Dolitsky’s book “Pipeline to Russia, the Alaska-Siberia Air Route in World War II,” 133 planes were lost in North America, and 44 planes in Siberia along the route due to severe weather conditions.

It is to the pilots who flew this route, and to all those who worked in support of the mission, that both the Fairbanks Lend-Lease Memorial and the new monument in Magadan are dedicated.

The artists involved are Andrei Kovalchuk, who was named as one of the People’s Artist of Russia honorees for his painting and is the chairman of the Union of Painters of Russia, and Konstantin Kuzminykh, a painter who serves as the chairman of the Union of Artists, a regional organization based in Magadan. The construction and installation of the monument took roughly a year and a half and was paid for by several companies, including Polyus gold mining and VILKON, as well as a number of unnamed private individuals.

Professor Nikolay Goryachev, chief researcher of North East Interdisciplinary Scientific Research Institute with the Russian Academy of Sciences, lives and works in Magadan. In an email sent to the Daily News-Miner, he explained that the Magadan Lend-Lease Monument is located at the city’s entrance, near the old Magadan airport.

“This airport at that time accepted AlSib aircraft in the coldest winter time — December-February — when the temperature in Seymchan, the main airport, was below minus 50 degrees Celsius,” he wrote.

The monument is made of bronze and stands at a height of a little over 10 feet. It depicts a handshake between an American pilot and a Soviet pilot against the background of a wing belonging to a Bell P-39 Airacobra aircraft. The propeller on the Fairbanks memorial is from the same aircraft, which is often held up as a symbol of the whole effort. Over 2,600 P-39s were transported to Russia during the war.

On the pedestal of the monument, there’s a bronze oval plate with the contours of the northeast of Russia and Alaska borders, with three planes above them. An inscription, in Russian, states “Dedicated to the heroes of ALSIB.”

According to Goryachev, a small ceremony was held at 1 p.m. May 9 to unveil the monument. Sergey Nosov, governor of Magadan County, and Magadan Mayor Yuri Grishan both said a few words. Others sent messages of greeting and congratulations, including Deputy Chairman of the State Duma of Russia Alexei Gordeev, Deputy Minister of Culture of Russia Olga Yarilova, and Vladimir Medinsky, who serves as assistant to President Vladimir Putin.

Mayor Ethan Berkowitz sent a video from Anchorage, which is the sister city of Magadan.

With regard to the significance of the monument, Goryachev wrote, “It is our duty to remember those events.” He explained that, although the war was far from Magadan at the time, its inhabitants played their part, providing the opportunity to transport aircraft and vital supplies along the Alaska-Siberia Air Route.

“The new monument is also a memorial for 115 dead pilots, who led the aircraft in the very difficult conditions of the North, with practically minimal weather data,” he wrote. “This monument will always attract our residents and especially young people, showing examples of common cooperation between the two of our countries.”