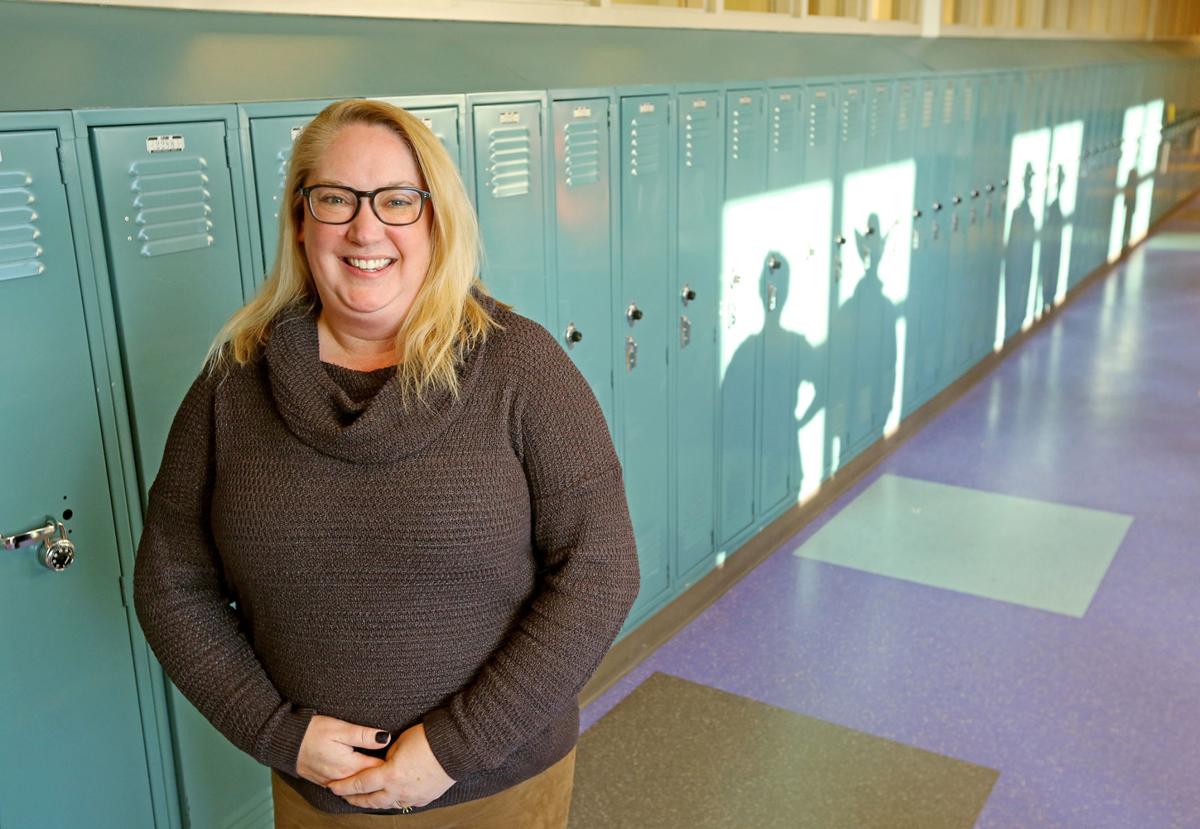 Courtney Havrilek, Lead Secondary Coordinator of After School Programs at Lathrop High School, poses in the hall outside her classroom as student cast shadows on the lockers Wednesday afternoon, October 16, 2019. Havrilek is the Spotlight for the week. 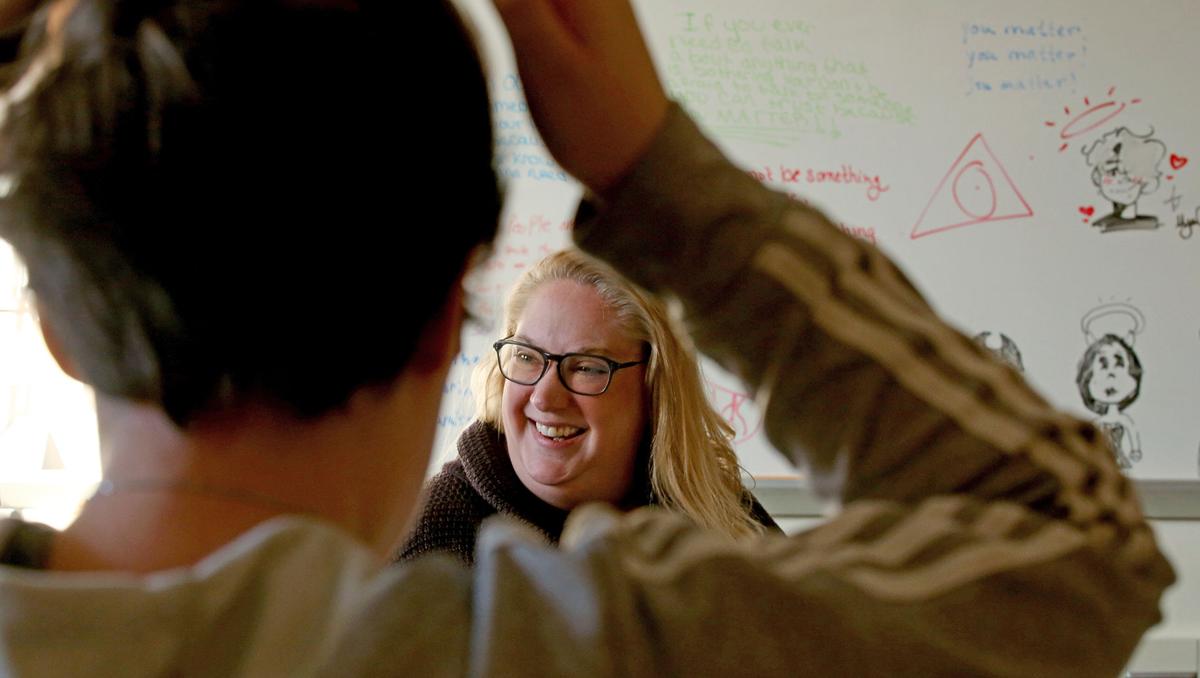 Courtney Havrilek, Lead Secondary Coordinator of After School Programs at Lathrop High School, works with students Wednesday afternoon, October 16, 2019. Havrilek is the Spotlight for the week. 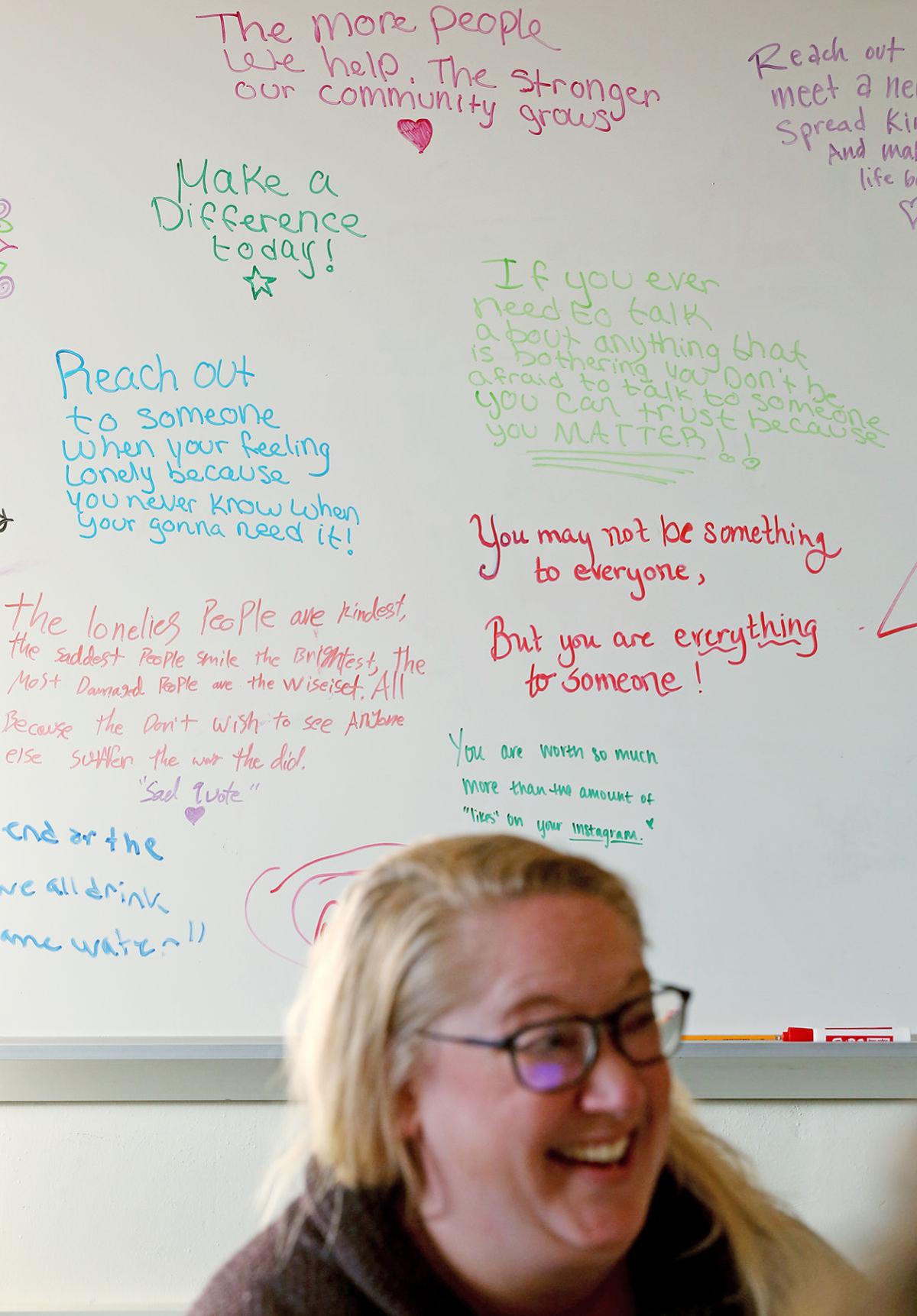 Courtney Havrilek, Lead Secondary Coordinator of After School Programs at Lathrop High School, works with students as inspirational phrases by students Randi McKinney and Mya Carlo fill the white board in her classroom Wednesday afternoon, October 16, 2019. Havrilek is the Spotlight for the week. 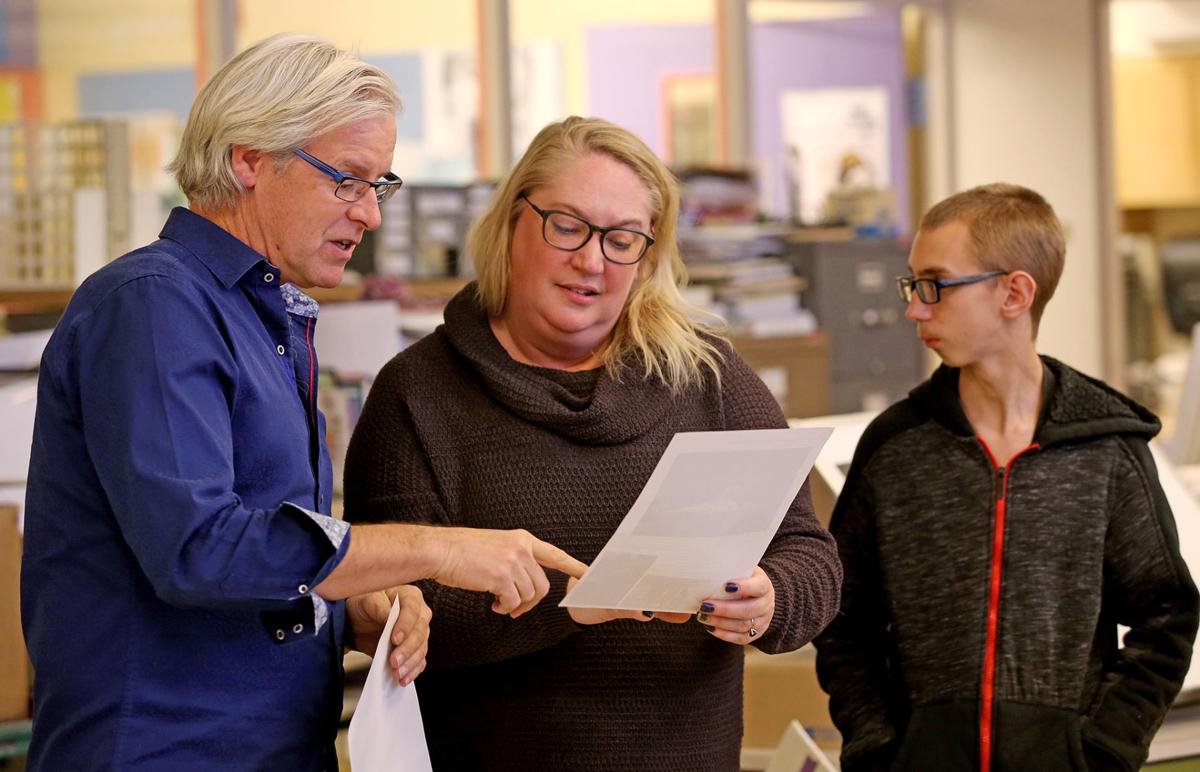 Courtney Havrilek, Lead Secondary Coordinator of After School Programs at Lathrop High School, poses in the hall outside her classroom as student cast shadows on the lockers Wednesday afternoon, October 16, 2019. Havrilek is the Spotlight for the week.

Courtney Havrilek, Lead Secondary Coordinator of After School Programs at Lathrop High School, works with students Wednesday afternoon, October 16, 2019. Havrilek is the Spotlight for the week.

Courtney Havrilek, Lead Secondary Coordinator of After School Programs at Lathrop High School, works with students as inspirational phrases by students Randi McKinney and Mya Carlo fill the white board in her classroom Wednesday afternoon, October 16, 2019. Havrilek is the Spotlight for the week.

For Courtney Havrilek, director of Lathrop After the Bell after school program at Lathrop High School, education is in her genetics.

“My dad was a principal — that’s how we ended up in Alaska — my mom was an assistant superintendent. My sister is a social worker,” Havrilek said. “So I think it’s pretty much in our DNA.”

During any average day at Lathrop High School you can find a group of students waiting outside Havrilek’s office door just as the bell rings to begin lunch. She greets them with a warm smile and welcomes the motley crew into her room, instructing them that there is food in her refrigerator and room to sit and study.

Many of these teens will return after school.

“We offer academic help, labs in the classrooms with tutoring, test prep, homework help,” Havrilek said. “Or even just if kids need to use a computer because they don’t have one at home. It’s really just this idea that all schools should be able to have their doors open later for students.”

Havrilek has been running the program for 15 years, what comes out to be three five-year grant cycles — all of which Lathrop’s program has been awarded funding.

“To have been awarded funding three cycles in a row is really incredible,” she said. “There is only about $5 million distributed across the entire state in federal funding.”

There are usually about 40 or 50 applicants for these grants and only about seven are awarded, Havrilek added.

“Everyone knows being here for students, building relationships, giving them what they need in an extended time especially for kids who struggle, is key. But for this grant, you have to prove it,” Havrilek said. “So we’ve been trying to prove it for 15 years and since that time we’ve seen increases in our test scores, increases in grades, increases in school attendance. The students learn to advocate for themselves. So we have seen a really amazing mix of academic gains but also those behavioral qualities.”

Havrilek spent her childhood in Portland, Oregon, before moving with her family to Fairbanks, where her father was hired as a principal. When it was time to attend college, Havrilek felt compelled to stick around. She received her undergraduate degree from the University of Alaska Fairbanks in elementary education after which point she remained in Fairbanks and completed her master’s degree through distance education from Concordia University in St. Paul, Minnesota.

“It was in a program called ‘school age childcare,’ which I guess now would be called ‘youth development’ or something along those lines,” Havrilek said.

After all these years, she said it still sometimes blows her mind that what only seemed possible as key interest in her younger years has now flourished into a lifetime job.

“It went from a passion to like, ‘wow I could make that work, I get to do this as my actual career,’” Havrilek said. “How cool is that?”

This fall, Havrilek was recognized for her work by the Afterschool Alliance, a national organization that recognizes educators for their work in student development and after school programs. Now, as a member of the alliance, Havrilek gets to join a select group of education officials to further advocate for the importance of after school programs and the need for funding for such programs.

“Afterschool Alliance was super passionate about equity in education, serving underprivileged students and ensuring access to as many students to programs like these as possible,” Havrilek said.

Havrilek and other members of her cohort will now advocate to state and national officials, members of Congress and members of education boards on the importance of such programs.

“Our job is just to tell those stories and to raise awareness. For all the students that I get to work with, there are at least twice as many who aren’t able to have access to programs like these,” Havrilek said. “It’s challenging to know that while the work we do is great, we’re not anywhere close to serving all the children we need to.”

Naturally, for Havrilek helping the students and seeing their success is the best part of her job. But a close second, she notes, is the feedback from parents the program is helping.

“Like super hard working parents with two jobs ... they’ve never been to a conference or been in the building, (parents) who say, ‘You know I could never do algebra with my kid, but thank you for being there for them,’” Havrilek said. “Just those stories are what make it all worth it.”

Ultimately, the program — and Havrilek’s passion — is helping students find their own path in a time when building their own concept of self determination.

“Our students come in, they sign up and they choose their own path, which I think is really important for high schoolers, they have their own identity,” Havrilek said. “And the fact that I get to be a part of that is one of the gifts of this job.”