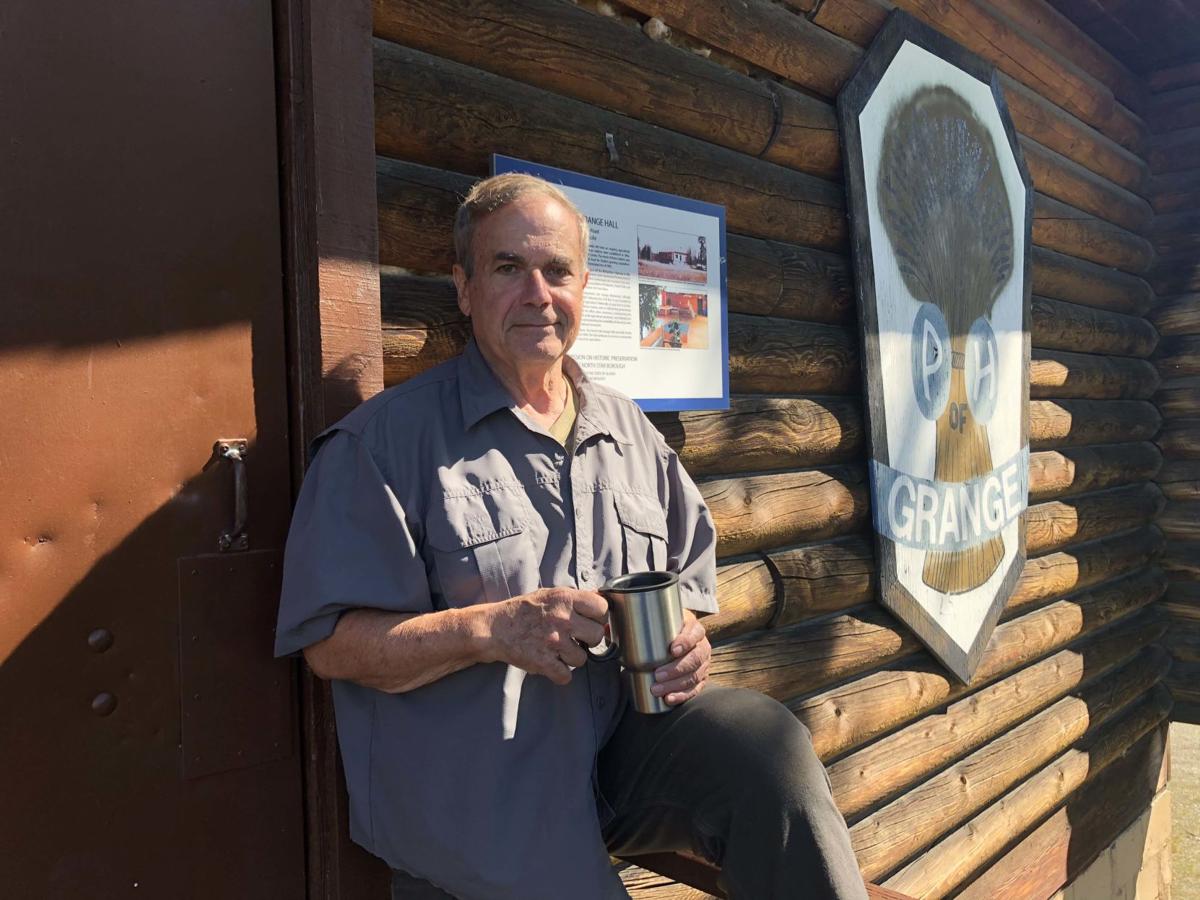 John Poirrier, president of the North Pole Grange, stands outside the Grange Hall on Friday morning. Poirrier has been a member of the fraternal organization for 25 years and as president can give a full history of the hall, as well as stories from his time as a member. Kyrie Long/News-Miner 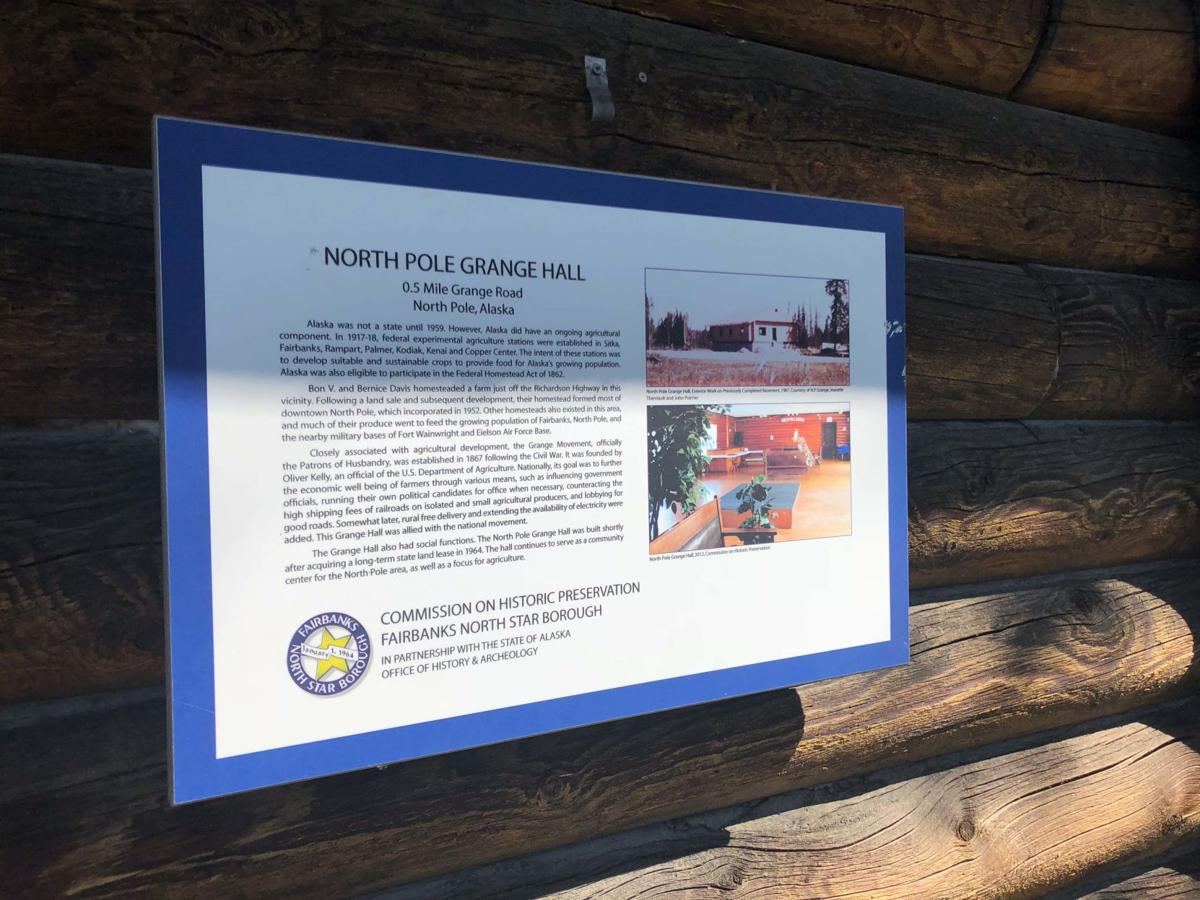 History of the North Pole Grange, which John Poirrier looks after as president, is listed on a plaque outside of the building. Poirrier has seen the location host dances, art shows, memorials, weddings and more. Kyrie Long/News-Miner

John Poirrier, president of the North Pole Grange, stands outside the Grange Hall on Friday morning. Poirrier has been a member of the fraternal organization for 25 years and as president can give a full history of the hall, as well as stories from his time as a member. Kyrie Long/News-Miner

History of the North Pole Grange, which John Poirrier looks after as president, is listed on a plaque outside of the building. Poirrier has seen the location host dances, art shows, memorials, weddings and more. Kyrie Long/News-Miner

Around the outside, inside, upstairs and downstairs, John Poirrier has a stories about North Pole Grange Hall.

Poirrier’s a quiet man, who doesn’t linger on the details of himself when he talks, but he knows the history of the place well.

The basic history is that the hall and its membership are part of the National Grange Order of Patrons of Husbandry. The Grange is a family, fraternal organization based around agriculture. North Pole’s location was originally the Eielson Area Grange, but the city of North Pole sprouted up around it and it became the city’s Grange instead.

Poirrier himself was introduced to the organization through his backyard. An architect and a retired U.S. Army helicopter pilot, he moved to North Pole in the 1980s with his wife and children.

“Came here because I always wanted to be in Alaska. Came here in 1985, stayed put right there, in that house,” Poirrier said.

It’s everything he wanted it to be and more.

“It’s just like Louisiana, except a little bit colder,” he said. After a moment he admits it’s a lot colder, but keeps smiling.

He stayed put with the Grange Hall too.

“When we were buying the house there just happened to be a wedding reception going on here,” he said. “There was a lot of noise coming from it and I asked the realtor.”

The realtor told him it was the Grange. Poirrier figured if he was going to be living in the area, he might as well find out more about it. That was in 1985. He’s the president of the organization now, and he could easily be a Grange historian.

“We’re a community service organization,” Poirrier said, “and we do things we think we can provide to help the North Pole community and the only asset we have is this building, and the idea is to use this building in whatever way we can to make it useful for the people in the area.”

And the community has used it for many, many things. Initially it was built as a square dance hall.

“The floor — this is bowling alley from one of the bowling alleys at Eielson Air Force Base,” he said, standing on the top floor of the area. “The people who built the Grange were just local people who worked in the area, mainly in the Eielson area.”

They salvaged from buildings as North Pole was forming and the pipeline was booming, Poirrier explained.

Since then, it’s been a place for marriages, birth celebrations, memorials, monthly art shows, church meetings and cookouts. Poirrier gives people the key and the Grange rents out the space, and he’s seen his fair share of events over the years.

“It’s amazing,” he said. “It really is. All of the things that have happened here are very very interesting. There’s lots of people that come through here that you just get to meet. The art shows have been particularly cool because, for me, instead of having to go to art shows every month, you can just come here.”

Those monthly art shows the Grange holds, which migrated online this spring due to COVID-19, sprung from Poirrier’s desire to start watercolor painting. (He’s president of the Fairbanks Watercolor Society, too.) Years ago, the Grange began holding classes at the hall, where painter Vladimir Zhikhartsev held a class and one day suggested the Grange Hall may make a good art gallery.

This year the celebrated a decade of shows, when Poirrier and Tammy Phillips spent over an hour talking about the art that’s been shown in the building over the years.

Art for a building

Now it’s art that might just be what keeps the Grange going.

“We’re trying to focus and build it into an art gallery,” Poirrier said, noting it would be called the North Pole Grange Gallery.

The idea, he explained, is to set it up as a 501c3 nonprofit, so that it can still be a Grange, but the new organization will be a separate entity, which could then take ownership of the hall.

“Currently we lease this land from the state of Alaska — $1 a year. Can’t beat that,” he said. “The lease is expired, clock is ticking. We’ve got to get out of here or buy the building from the state.”

As it currently stands, he notes, he doesn’t think the organization can buy it. However, opening up the art gallery, he said that the hope is they could open up the potential for corporate sponsorship to operate as a gallery, which would help pay some of the costs and keep the building going.

“The building itself is on the borough’s register of historic places,” he said.

Poirrier clearly cares for the place. He tends the land, he rents the space, he helps host the art shows, he checks up on the garden and he’s out there daily in the winter, weekly in the summer.

Even the North Pole bees know where to find Poirrier.

He names them off, standing at the edge of Thirtymile Slough on Friday morning, while the honeybees lingered on irises and hovered over the water.

“That’s Gloria, that’s Henrietta, that’s Suzette,” he said. “These are all mine. These are my honeybees.”

Poirrier’s bees, which he keeps in hives on his property, have followed him from his backyard to the parking lot of the North Pole Grange Hall. It’s a short fly over the slough for the bees, a short drive for Poirrier.

The people who hold painting classes and outdoor activities at the North Pole Grange can stand at the banks of the slough for a good view. Poirrier noted people go all through the woods looking for idyllic scenery.

The rain flooded the area, with the water threatening any second to come leaking into the Grange’s parking lot. Sometime soon, Poirrier noted he’ll be taking a paddleboat up the waterway to unblock the river. Beavers, which have a dam in sight of the Grange, have built a couple of dams along the slough, one of which has contributed to the high water level currently. Poirrier’s children grew up paddleboating on the same slough, the Grange in their backyard.

Sometimes it’s a beaver dam, sometimes it’s beehive that’s moved in, but Poirrier looks after for the Grange. It’s been a part of his life for 35 years.

“I had my retirement party here. My wife and I did our fiftieth anniversary party here. So it’s just a nice little place. It’s a little piece of North Pole,” Poirrier said.