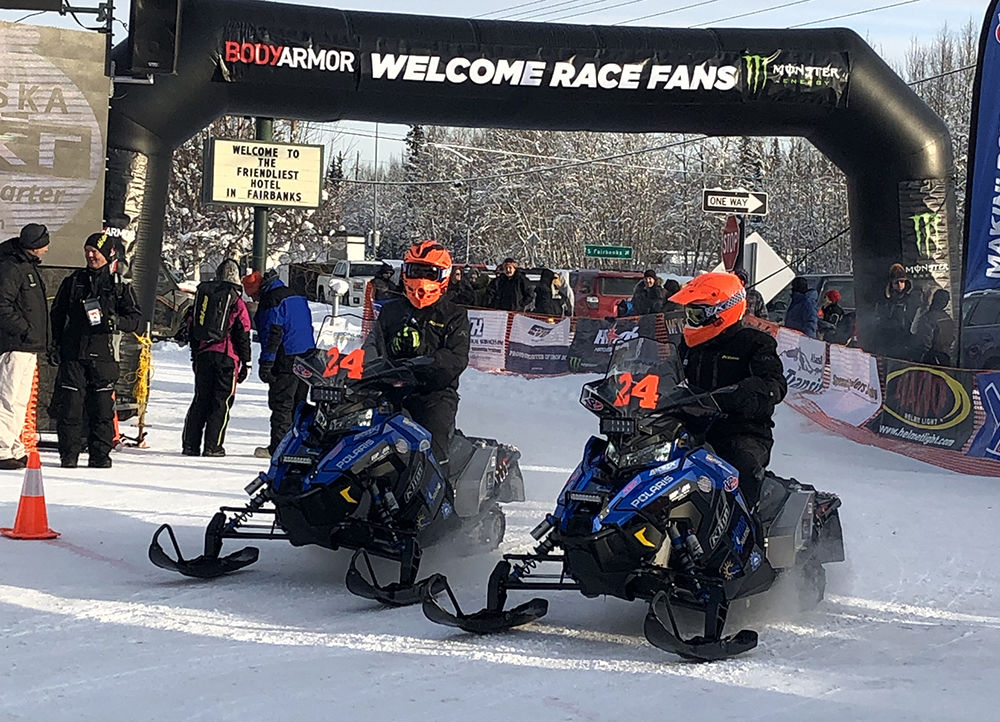 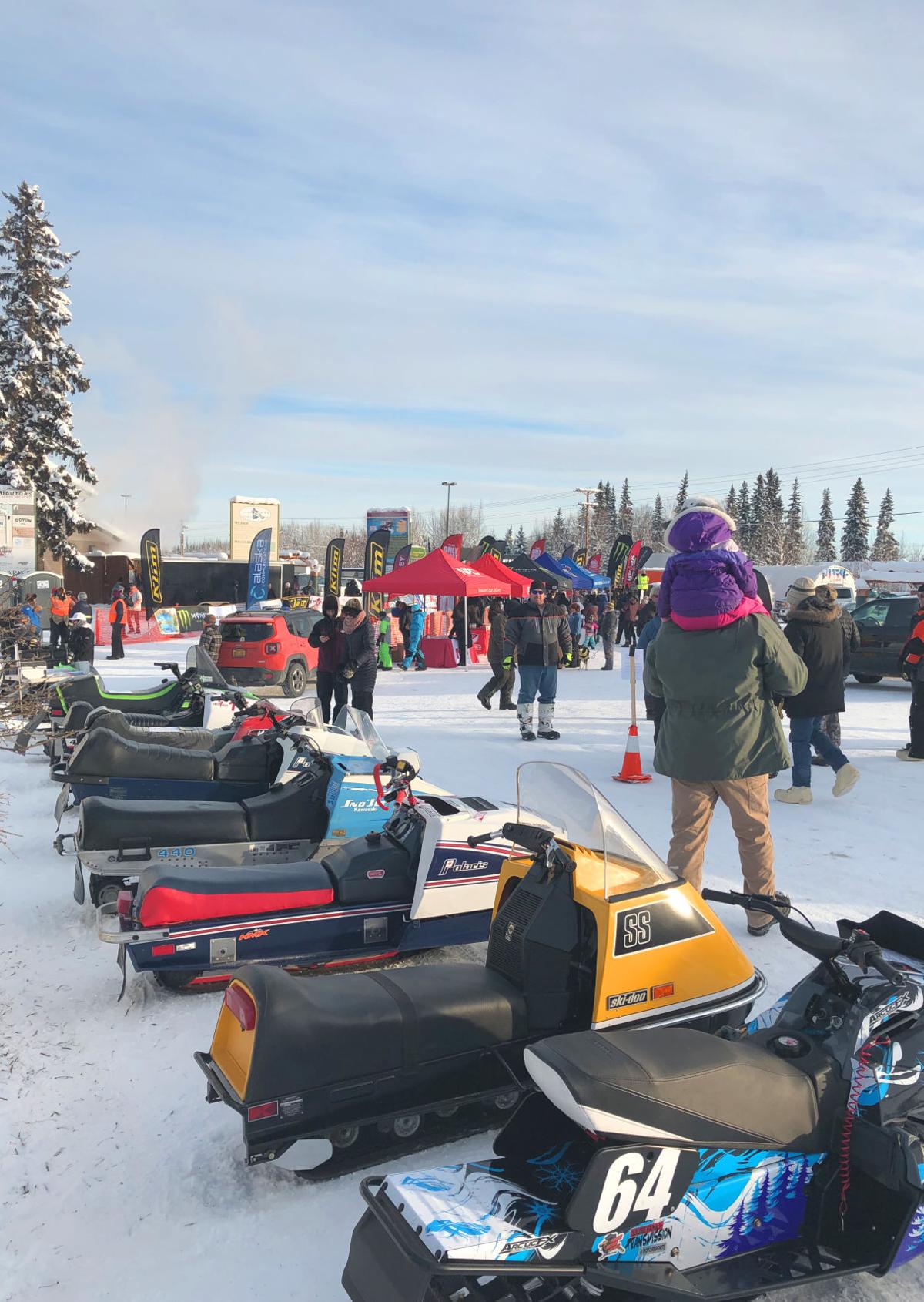 Vintage snowmachiners on display at the start of the 2020 Iron Dog snowmachine race on Sunday. Amanda Bohman/News-Miner 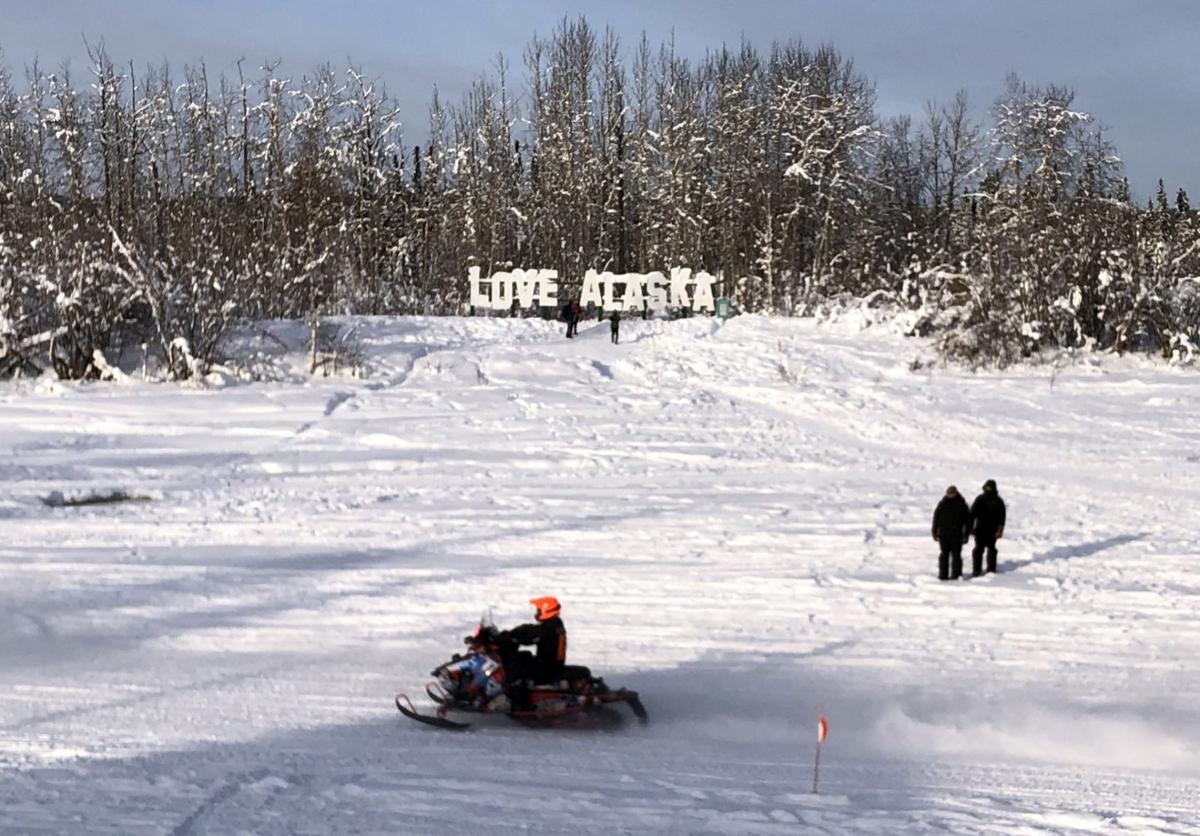 A competitor in the 2020 Iron Dog passes a "Love Alaska" sign while racing on the Chena River on Sunday, the first day of the 2,400-mile race. Amanda Bohman/News-Miner 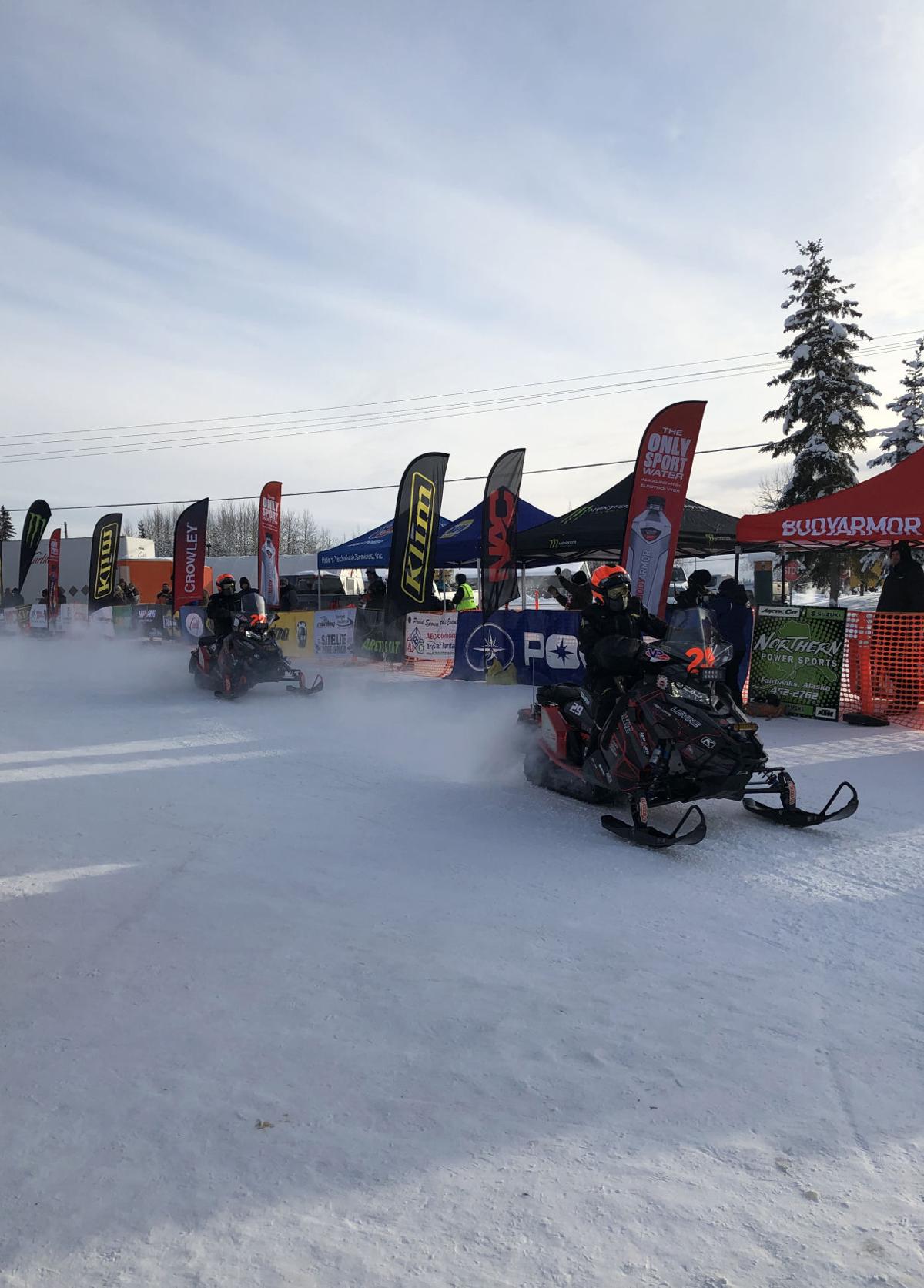 Larry and Danielle Levine, 25 and 56, of Anchorage, seconds after beginning their second Iron Dog race together on Sunday. Amanda Bohman/News-Miner

Vintage snowmachiners on display at the start of the 2020 Iron Dog snowmachine race on Sunday. Amanda Bohman/News-Miner

A competitor in the 2020 Iron Dog passes a "Love Alaska" sign while racing on the Chena River on Sunday, the first day of the 2,400-mile race. Amanda Bohman/News-Miner

Larry and Danielle Levine, 25 and 56, of Anchorage, seconds after beginning their second Iron Dog race together on Sunday. Amanda Bohman/News-Miner

Twenty-nine teams blazed out of Fairbanks on Sunday, headed toward Galena, at the kick off of the 2020 Iron Dog, a 2,400-mile snowmachine race billed as the longest and toughest in the world.

The 58 competitors include siblings, a father and daughter team, and at least seven past race champions who will spend the week traveling through Interior and Western Alaska, hitting Tanana, Kaltag, Kotzebue, Nome, Unalakleet, McGrath and more. The race ends Saturday in Big Lake.

The winning team will be known as the fastest cross-country snowmachiners of 2020 and receive a cash prize, gifts from sponsors and a trophy.

Details of the prizes will be announced on Sunday, according to John Woodbury, Iron Dog executive director. Last year’s prize was $100,000 cash and additional gifts from sponsors worth about $70,000, he said.

The racers are from all over Alaska and beyond. Rookie Jeremiah Vanderpool lives in Fairbanks and is partnered with his brother, Jerad Vanderpool, of McGrath. Roger Brown, of North Pole, who is on the Iron Dog board of directors, is also competing after replacing a racer who dropped out.

The youngest racer this year is 23-year-old Luke Schruf, of Wasilla, who is partnered with his father, Konrad Schruf, also of Wasilla. Both are rookies.

The oldest competitor, 61-year-old Greg Deacon, of Reno, Texas, is also a rookie.

Danielle Levine, 25, of Anchorage, is the only woman entered in the pro classic and is partnered with her father, Larry Levine, also of Anchorage.

Organizers changed up the course this year to present new challenges.

The race has traditionally started in Southcentral Alaska, gone to Nome and then finished in Fairbanks.

For the 2020 Iron Dog, they reversed the direction and added a 375-mile loop north of Koyuk toward Kotzebue and then back to Nome. It’s similar to the one used in the Archie Ferguson-Willie Goodwin Memorial snowmachine race.

This was the second time the Iron Dog has started in Fairbanks, according to Woodbury. The last time it started here was in 2004 due to poor snow conditions in Southcentral Alaska.

If the race is like past years, as many as 40% of the 29 teams will scratch before getting to the finish line.

A few teams had troubles shortly after dropping down onto the Chena River from the starting line in front of Pike’s Waterfront Lodge.

No one was seriously hurt, Woodbury said, and no one had dropped out of the race as of Sunday at 2 p.m. but one snowmachiner crashed, causing broken handlebars. Replacement parts are being brought to Nenana, according to Woodbury.

“They will probably repair that and continue,” the race director said.

Another team blew an engine and had to have the snowmachine towed back to the starting line, Woodbury said. He expected that team to also persevere.

Complications are par for the course in the Iron Dog, which began in 1984.

“Part of being an Iron Dogger, you get caught with obstacles. You overcome them and you keep going,” Woodbury said.

What are some of the challenges the racers will face over this next week? Open water, cliffs and roaming buffalo to name a few, Woodbury said.

Snowmachiners will encounter winds as they head west but temperatures will rise from the double digits below zero they encountered at the race start, according to Woodbury.

The racers will overnight in Galena before the next leg on Monday, which ends in Kotzebue. On Tuesday, racers will aim for Nome.