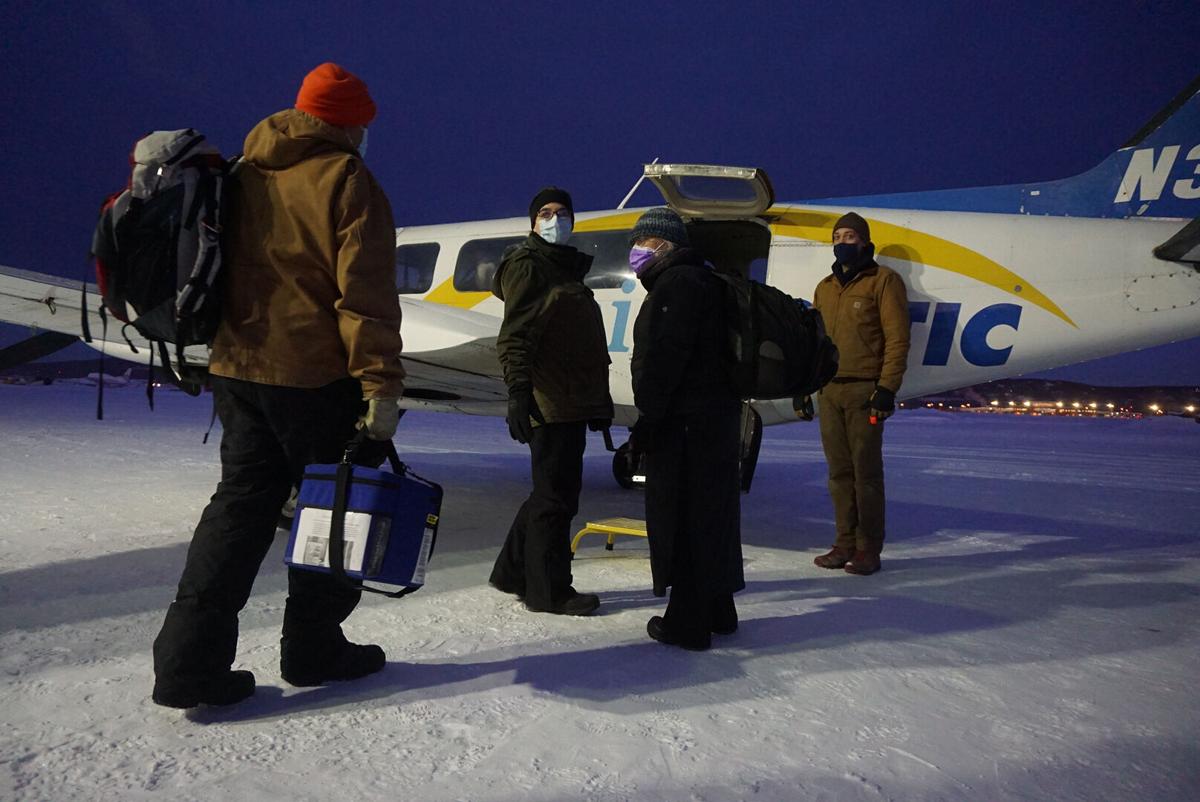 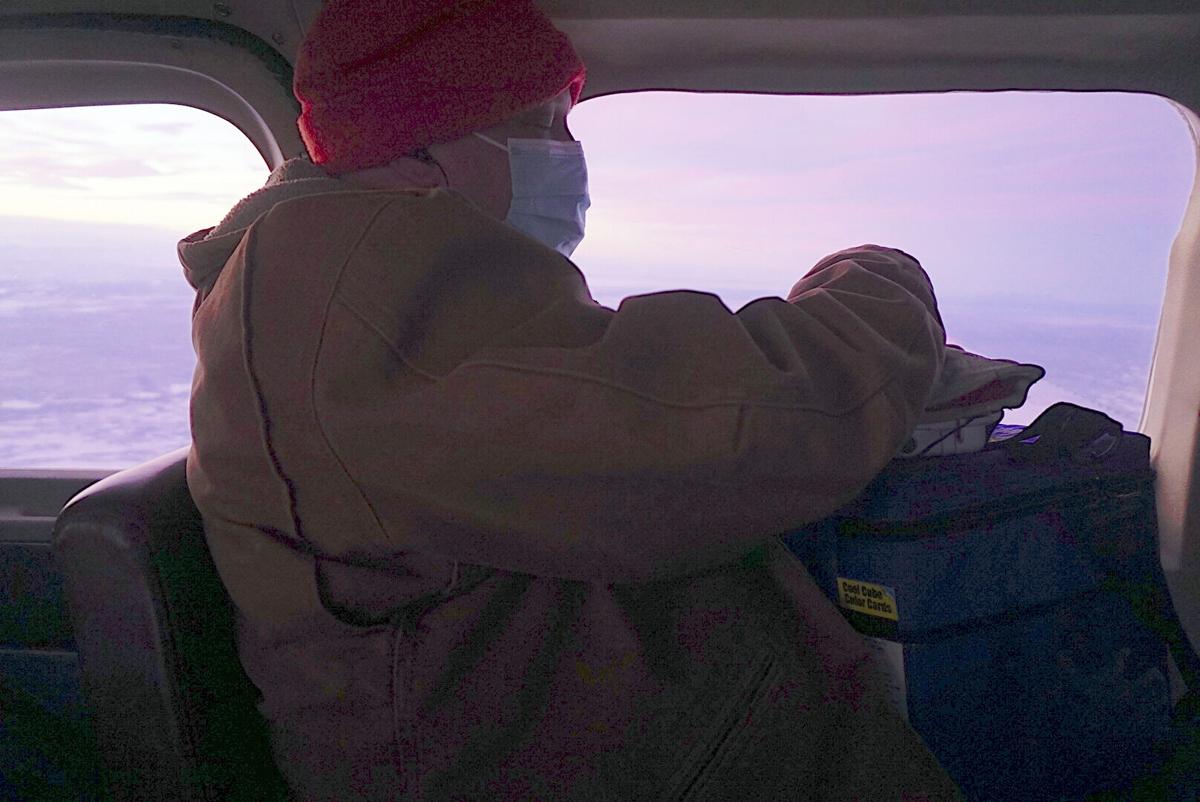 Keith Lund catches a nap while carrying the COVID-19 vaccine on the flight to Ruby on Friday, March 5, 2021. Alena Naiden/News-Miner 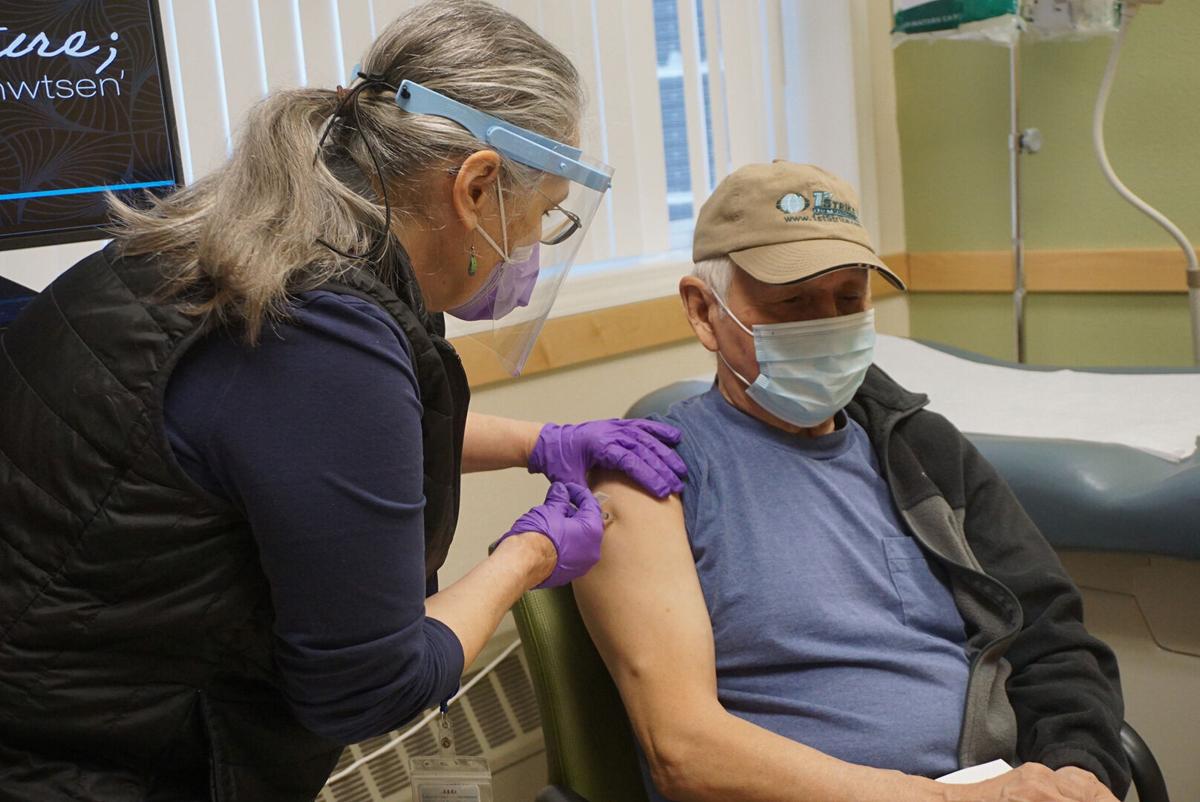 Traditional Chief William McCarty of Ruby receives his second dose of the COVID-19 vaccine on Friday, March 15, 2021, from Anne Lilley. 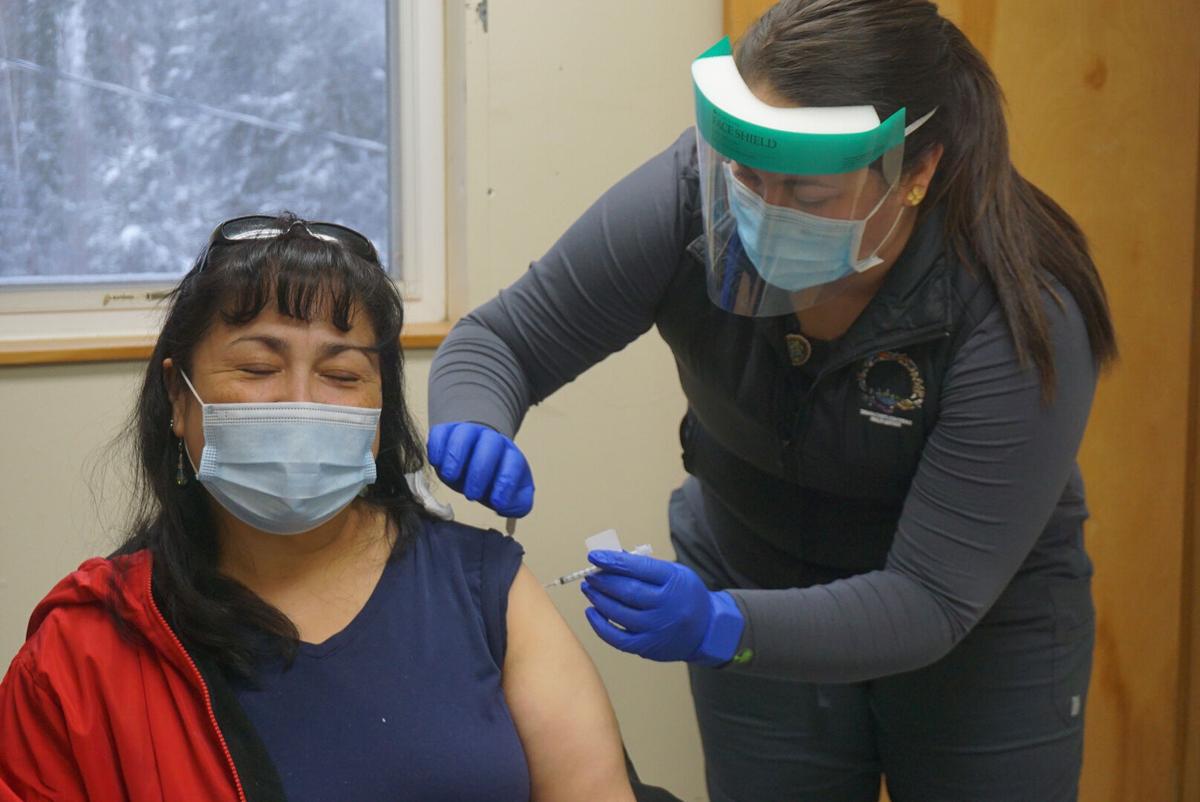 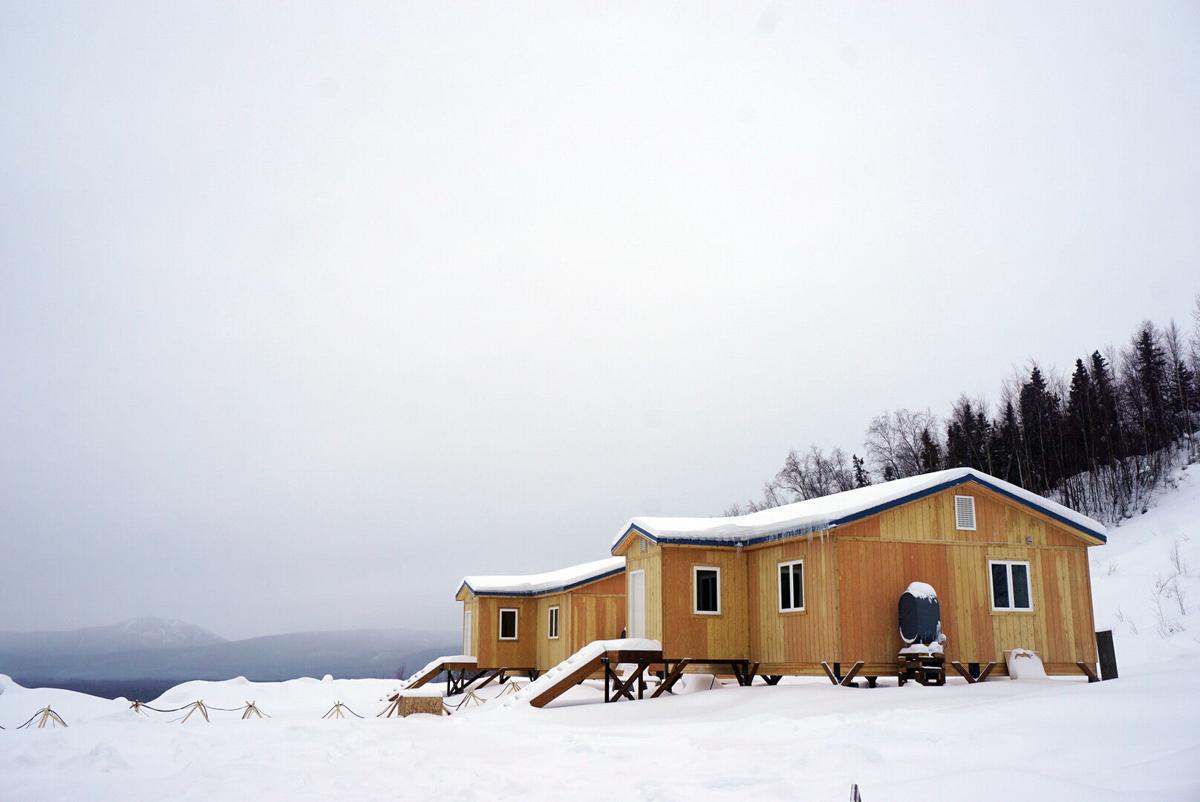 The village of Ruby built these houses for quarantining patients, with construction wrapping up in the fall. Alena Naiden/News-Miner 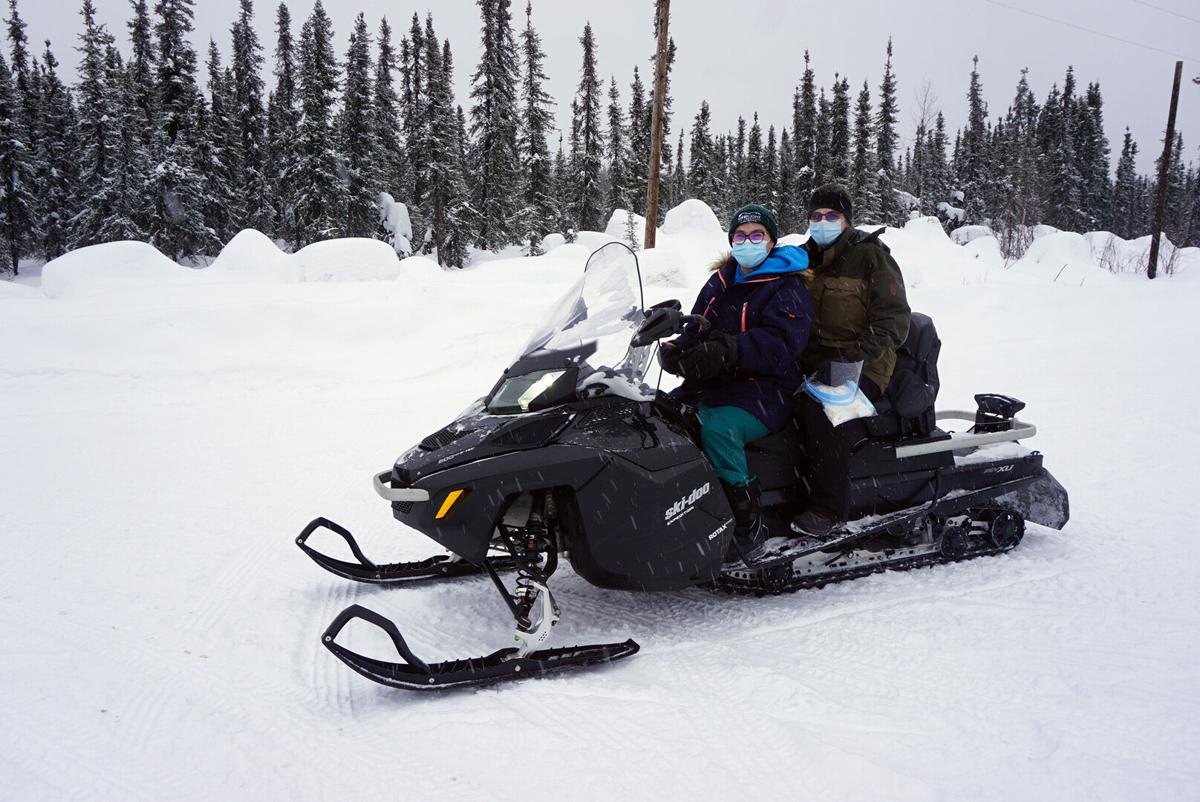 Karissa Caroll, left, and Jo Miller deliver a vaccine to the Ruby resident who couldn't come to the tribal hall for her second dose on Friday, March 5, 2021. Alena Naiden/News-Miner 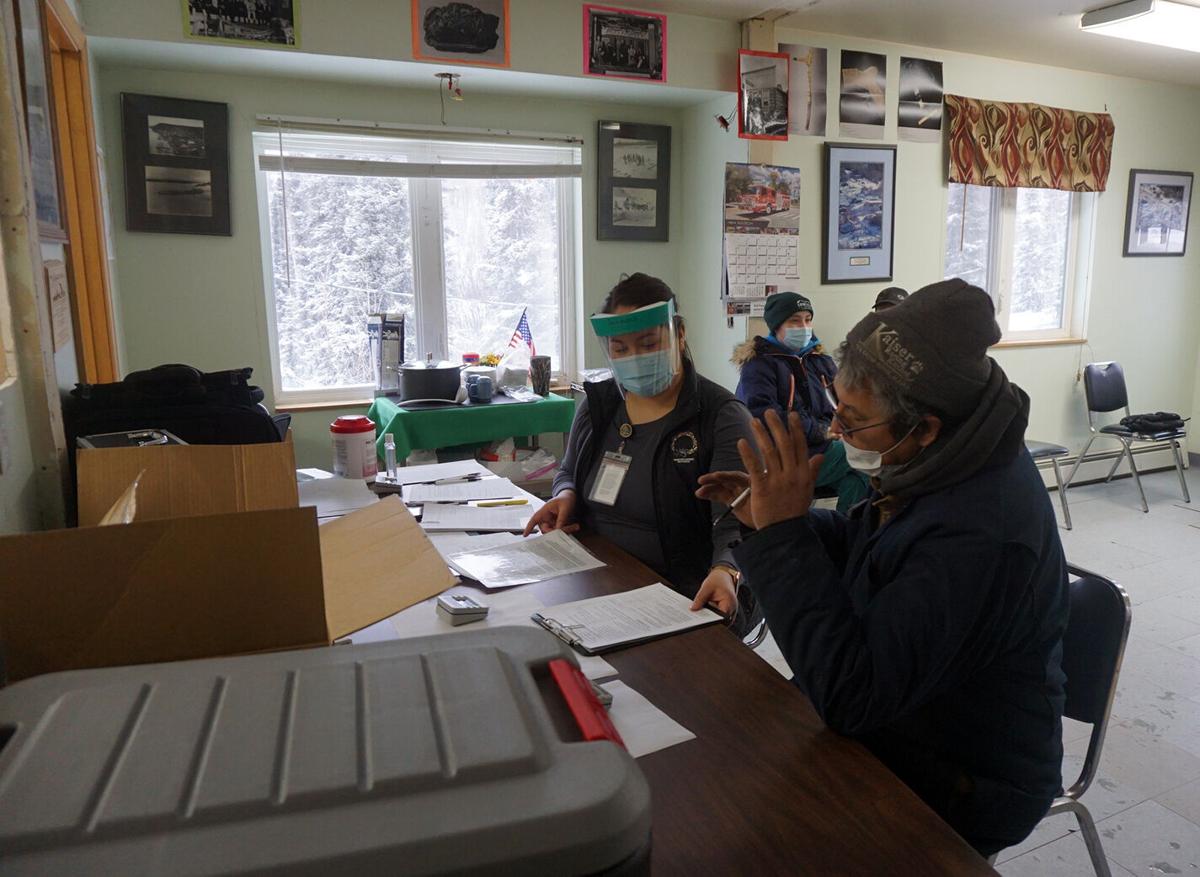 Tori Stein, left, explains rules and procedures to a patient before his vaccine Friday, March 5, 2021, in Ruby, Alaska. Alena Naiden 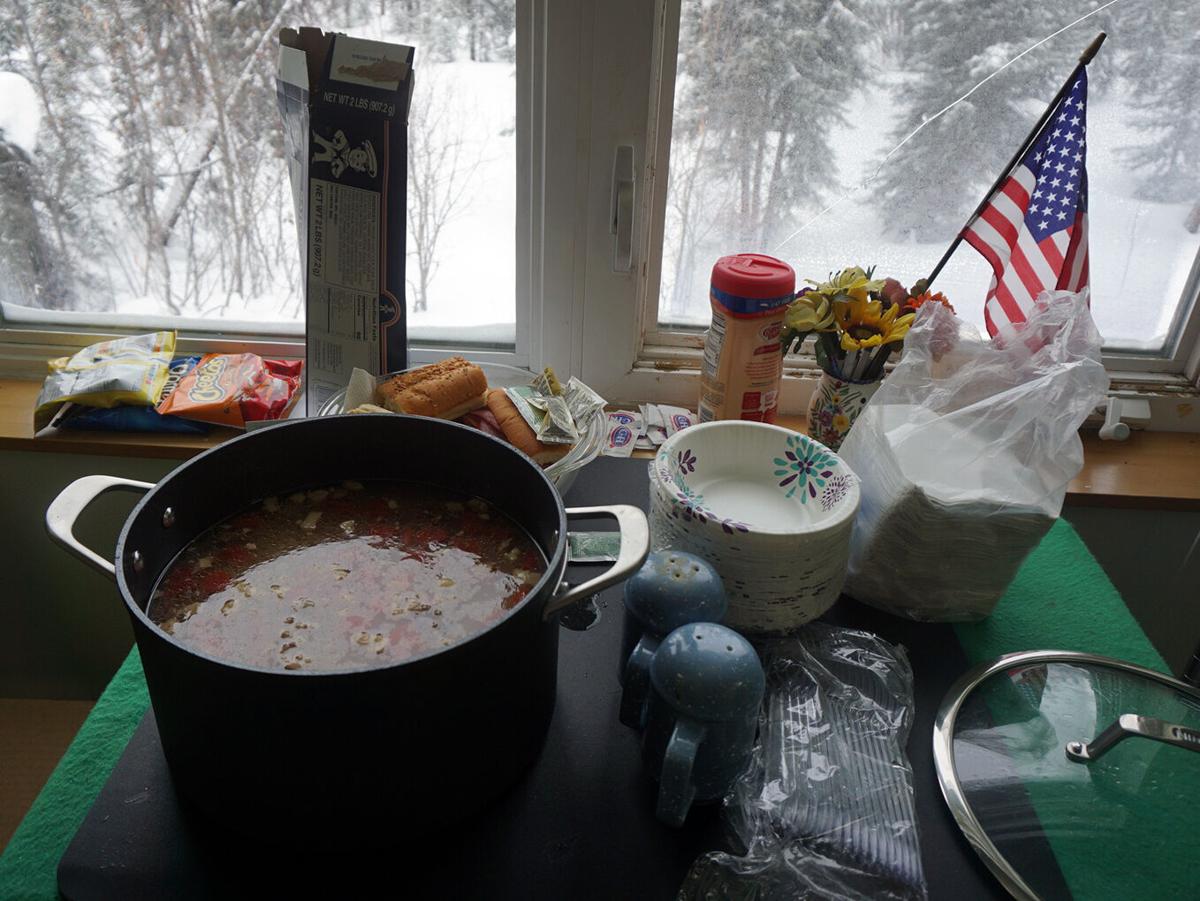 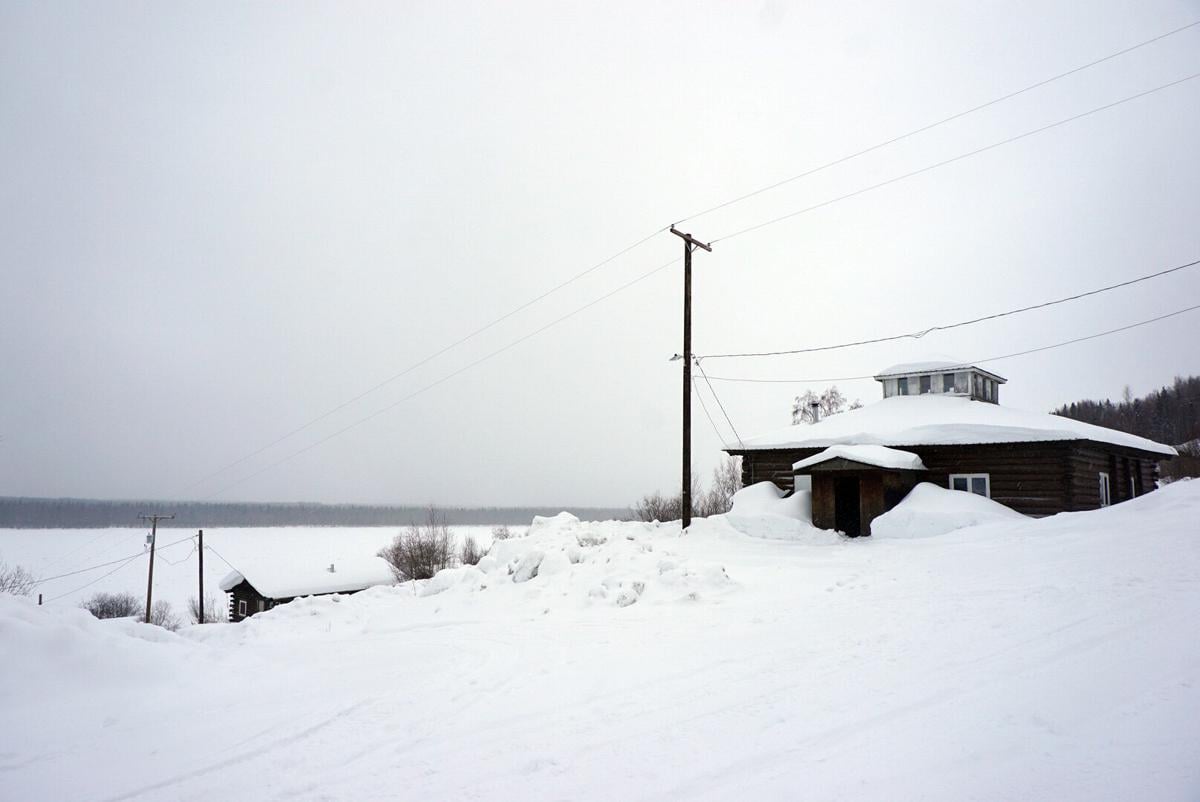 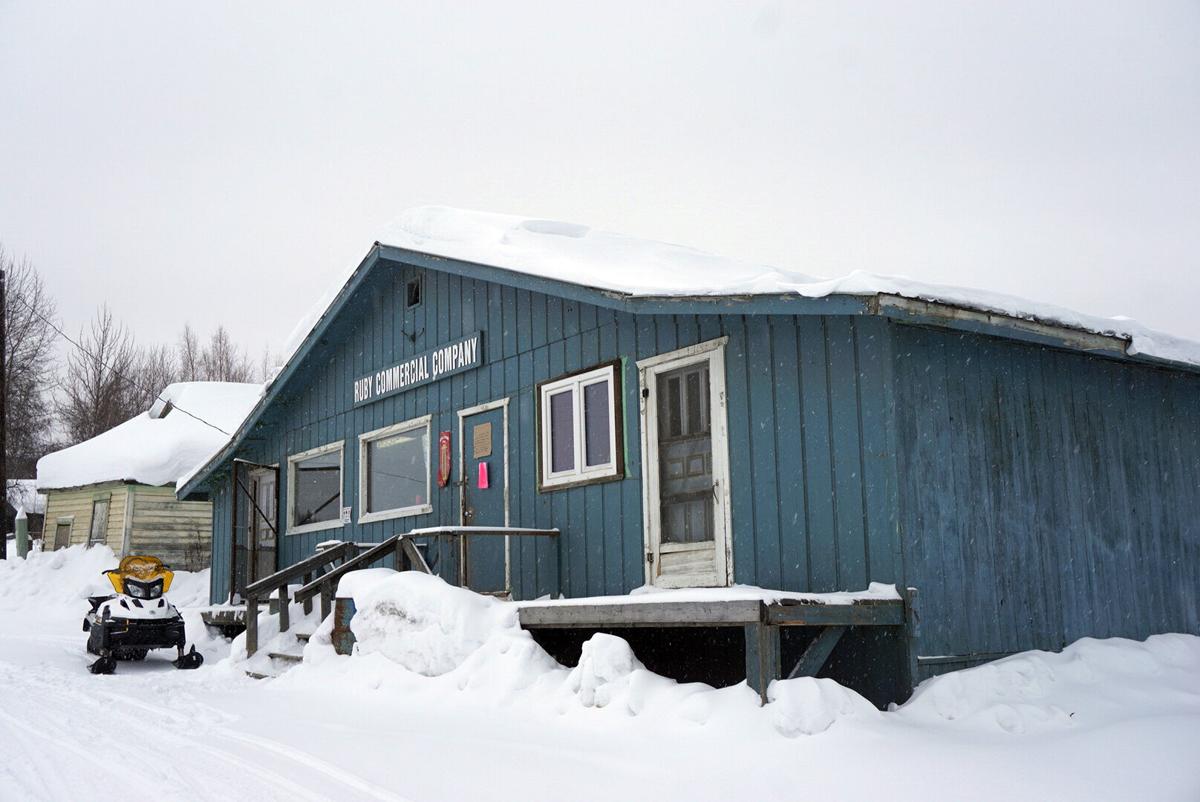 The village store is only open for phone orders, which employees will deliver to residents curbside. Friday, March 5, 2021. Alena Naiden/News-Miner 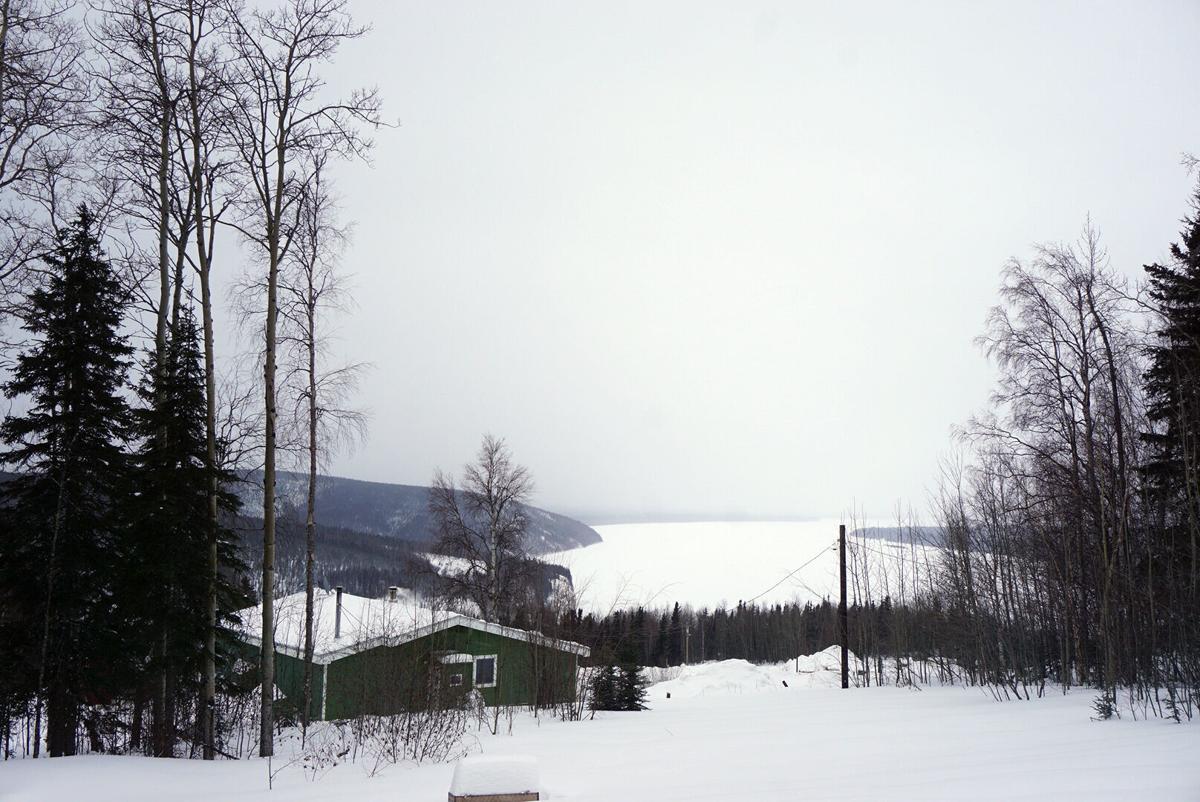 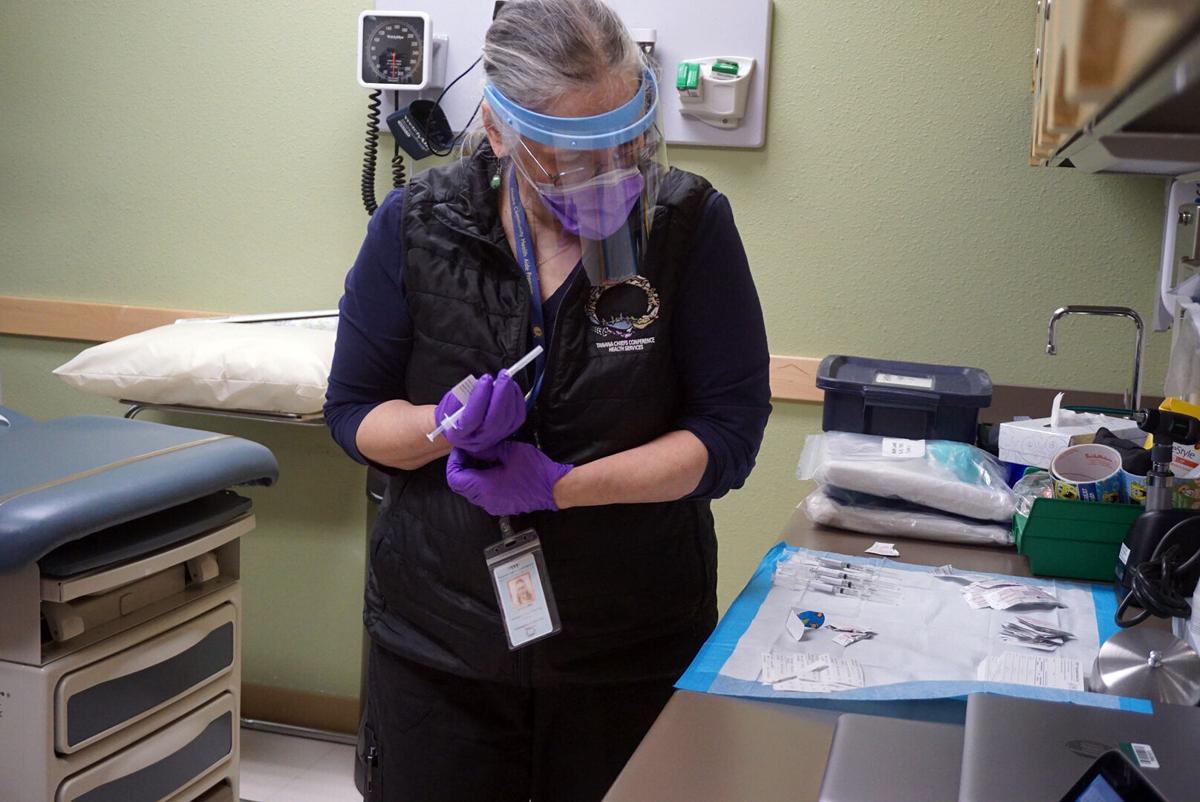 Anne Lilley, a nurse practitioner, prepares a vaccine for a patient on Friday, March 5, 2021, in Ruby, Alaska. Alena Naiden/News-Miner

Keith Lund catches a nap while carrying the COVID-19 vaccine on the flight to Ruby on Friday, March 5, 2021. Alena Naiden/News-Miner

Traditional Chief William McCarty of Ruby receives his second dose of the COVID-19 vaccine on Friday, March 15, 2021, from Anne Lilley.

The village of Ruby built these houses for quarantining patients, with construction wrapping up in the fall. Alena Naiden/News-Miner

Karissa Caroll, left, and Jo Miller deliver a vaccine to the Ruby resident who couldn't come to the tribal hall for her second dose on Friday, March 5, 2021. Alena Naiden/News-Miner

Tori Stein, left, explains rules and procedures to a patient before his vaccine Friday, March 5, 2021, in Ruby, Alaska. Alena Naiden

The village store is only open for phone orders, which employees will deliver to residents curbside. Friday, March 5, 2021. Alena Naiden/News-Miner

Anne Lilley, a nurse practitioner, prepares a vaccine for a patient on Friday, March 5, 2021, in Ruby, Alaska. Alena Naiden/News-Miner

RUBY — A small plane landing on a narrow airstrip at a village south of the Yukon River on Friday brought seven people, a blue box and a sense of hope. Ruby is the last village where the Tanana Chief Conference is administering the second dose of the COVID-19 vaccine.

Since late December, TCC has given a total of 11,524 doses to its patients in Fairbanks and 26 rural communities. It’s been 75 days since they started, and two Friday flights — one to vaccinate 17 people in Kaltag and another 59 people in Ruby — complete the two-and-a-half-months-long chapter.

In Interior Alaska where life has been on halt for the last year, this day is marked with a hope for change.

“The shot is opening the door for us so we can try to have a normal life and do things we were doing before without being scared,” said Jennie Hopson, who has lived in Ruby for 18 years and has been city clerk for 16. “I’m still a little scared but not as much because the shot is going to protect me. I want to go to my family and see my uncle and aunt. It’s time to go visit, and the shot kind of gives you that hope.”

For people on the vaccination team, it is a privilege to be able to help people in the Interior see their family maybe for the first time in a year, said Keith Lund, a coordinator at the TCC’s Community Aide Program who flew to a majority of the villages with the vaccine. Jo Miller, a physician assistant who also went to most of the villages, agreed.

“I feel blessed to be a part of this, a part of hope and a sense of return to life as it should be,” she said.

To bring the vaccine to Ruby, seven people boarded a shiny Navajo plane on Friday morning as a crescent moon looked over the East Ramp at Fairbanks International Airport. About 30 minutes into the flight, the snaky frozen rivers below have a pink glow, and the sun shines in Lund’s face as he tries to catch a nap.

“It used to be so dark when we were starting out,” he said. “Now leave in the morning with the sun rising and get light when we get home. Your spirits lift with sunshine.”

In the village, the team is met by residents who take them to the clinic. Elders come to the Tribal Hall, while everyone else receives the vaccine in the Town Hall building located in the same parking lot. TCC is vaccinating everyone 16 and older in the villages to protect the residents and ease the logistical burden of getting the vaccines out.

Around 9 in the morning, people start arriving by cars, on foot and on snowmachines. The first patient in the Tribal Hall is Dale Honea, who says he is getting his shot because he wants to get back to work and moose hunting. He also doesn’t want to get COVID again.

In the end of January, Ruby saw a COVID-19 outbreak with about 25 people getting infected, said health aide Karissa Caroll.

“One person broke the quarantine and visited these people, and these people went there and infected others, and that’s how it dominoed across the village,” she said. “That’s what makes us high risk because we are so confined with each other.”

Traditional chief William McCarty said it was hard for the community to distance during the holidays.

“The younger folks, they get carried away and they want to go be with one another. It might have been OK at a distance, but during New Year’s, they are hugging one another, and that started it,” he said. “It’s been a real problem for people not paying attention, but now they realize now that you have to follow instructions to avoid spreading.”

Another village resident, Debrah Captain, got sick at the end of January.

“I thought I would never make it,” she said. “I sat up the whole time in a chair. Two weeks is a long time sitting in that chair. Don’t want to do that again.”

COVID brought no deaths to Ruby, and everyone who got it recovered. However, across Alaska, the Native population has been hit hard by the virus, as it was during the Spanish flu epidemic, McCarty said.

McCarty’s father ran a dog sled team for 28 miles from Ruby to Whiskey Creek, to help deliver the vaccine from Nenana to Nome. McCarty listened to his dad’s stories, and now, as a traditional chief of many years, he advises the Ruby residents based on what he learned from his father.

“From his advice and his words and his stories, in many ways, we understand what’s going to happen if people don’t get the vaccine,” McCarty said. “For things like that, we want to be prepared, be prepared for the worst and try to avoid it.”

During the pandemic, Ruby restricted travel to the village, canceled gatherings, big holiday celebrations, sports and events. The school has been closed until recently, and the two stores have been on-and-off open only for curbside pickup. Even going down the river to the neighboring villages by boat or on a snowmachine was not an option.

“Villages have done an amazing job to protect their people and keep them healthy and sound, but it’s at a cost,” Miller said.

“The biggest impact is just being alone,” Hopson said. She said that “not one grandkid came and visited this summer,” and she hasn’t seen or hugged her friends in more than a year.

“Like him,” she pointed at a young man in the clinic. “I haven’t seen him in so long, and this kid too. I never thought that that would ever happen that I will not see these people in so long.”

Caroll said Ruby residents are really happy about vaccines because they want this to happen.

Miller said that in other villages the mood seems similar, and “people are nervous as anybody else but they want to get vaccinated because right now they can’t be together.”

For those who are hesitant, whether they want more information about how the vaccine affects fertility or whether it has aftereffects, health aides invite them to come and talk to one of them.

“It’s like this cliff — if someone jumps from it, will you?” Miller said. “They need to know that there is someone to catch them on the other side. People need their time to process and say yes.”

The TCC team vaccinated 59 people in Ruby — exactly as many as they planned. One by one, residents came in a steady flow. Someone brought in the radio blasting Pat Benatar’s “Hit Me With Your Best Shot” and Captain brought a pot of moose soup to thank and feed the vaccination crew.

“I’m hoping to open our community soon and I’m excited to see people come and get the shot,” Captain said. She received her second shot as well, asking her daughter, health aide Tori Stein, to give it to her.

“I’m just so proud of her for taking on such a role,” Captain said.

Miller said TCC’s vaccination work relied in many ways on the health aides like Stein who are local to the villages and know everyone there. Health aides manage clinics and are on-call for health services 24/7, all the while taking care of the health of people who are also their family members and friends, which can be emotionally challenging.

“These young ladies are the ones who make the real difference,” Miller said. “I call them front-line heroes. Well before this pandemic and well after this pandemic, these people are there every day, taking care of their community.”