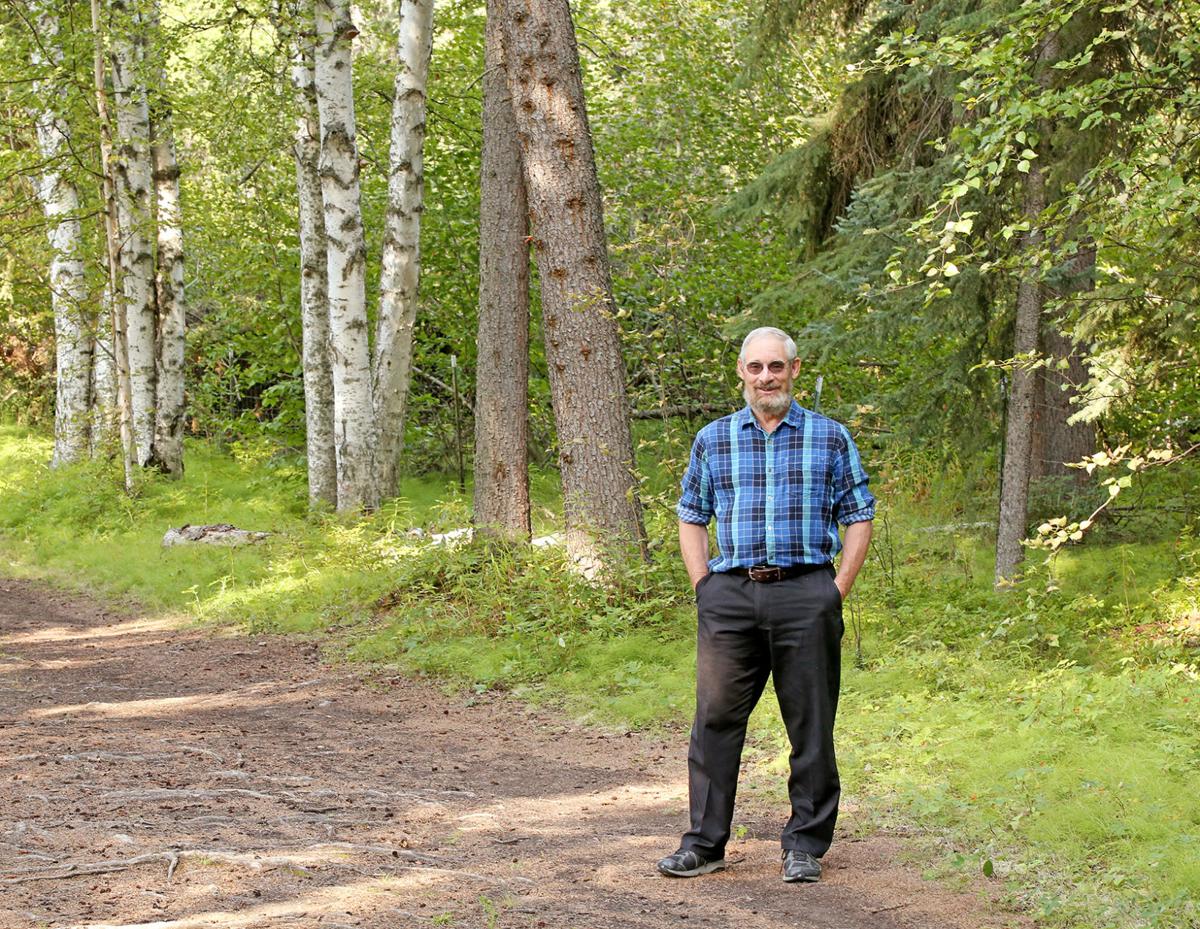 Matthew Sturm, a snow researcher with the UAF Geophysical Institute, poses outside for a portrait while taking a break from talking about his 40 years of field work Wednesday morning, July 31, 2019. Sturm is the Spotlight for the week. 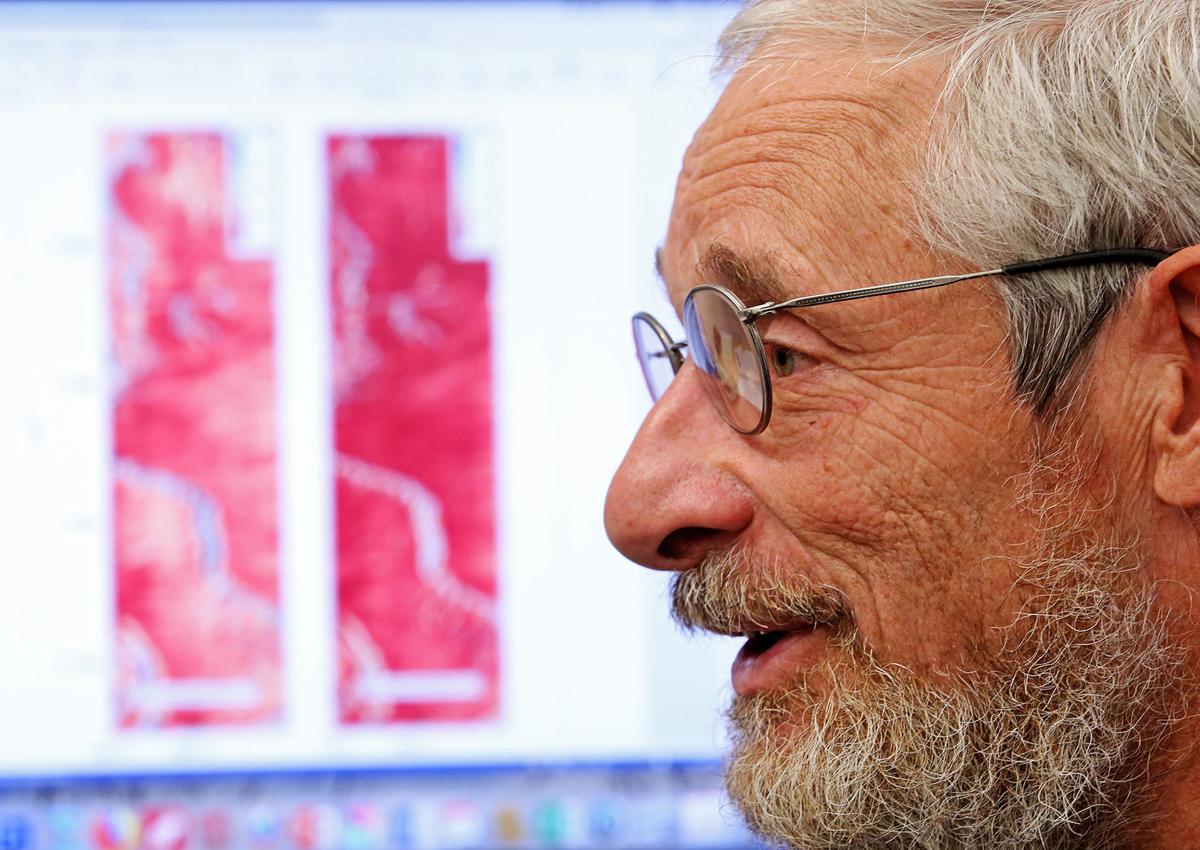 Matthew Sturm, a snow researcher with the UAF Geophysical Institute, talks about his 40 years of field work Wednesday morning, July 31, 2019. Sturm is the Spotlight for the week.

Matthew Sturm has no intention of ending his decadeslong career in snow research anytime soon.

“The focus of my research has always been snow, what it does for people, for ecosystems, for water, you name it,” Sturm said. “It’s been my focus for close to 40 years now.”

But things are changing and some adjustments may be tougher than others, he noted.

“Snow plays a lot of roles, but it does that because it covers so much of the Earth,” Sturm said. “When you think about snow, it’s kind of like thinking about air. You don’t ask questions about air, but without it, the world we live in, we couldn’t live in. That’s why it’s so important to pay attention to it and how it’s changing.”

Sturm grew up in New Mexico, but spent much of his childhood dreaming of the North.

“I was in love with Alaska. I was a young boy reading heroic stories of adventure,” Sturm said. “So, I enlisted in the Coast Guard and first came up on an icebreaker and then was later stationed in the Aleutians.”

Sturm returned to New Mexico, where he met his wife, for his bachelor’s degree in geology from New Mexico Tech. He and his wife soon returned to Alaska, where he began his master’s degree at the University of Alaska Fairbanks on glacier and volcano interactions on Mount Wrangell. He soon followed his master’s degree with a doctorate, completed under the advising of Arctic researcher Carl Benson. The thesis focused on heat and mass transfer in snow as an insulator.

“I got more and more interested in snow, so my Ph.D. was actually done in the field next to West Valley High School — very exotic,” Sturm said with a laugh. “I looked at the insulation value of snow, which turns out to have a lot of practical issues associated with it including how we build pipelines in this state.”

At the end of his doctorate program, Sturm was offered a position studying snow and permafrost for the U.S. Army at the Cold Regions Research and Engineering Laboratory, where he worked for 27 years. But, he said, he stayed connected with the university throughout and his love for the institution ultimately brought him back.

Sturm said he’s always been drawn to the mysteries of snow.

“We live with it, we interact with it, we ski with it,” Sturm said. “Everyone has a relationship with snow, whether it’s a love or hate relationship or both. I’ve always loved snow. There’s a huge amount of science to it, too.”

Sturm has written a number of books on the topic also, including “Apun: The Arctic Snow” and “ Finding the Arctic: History and Culture Along a 2,500-Mile Snowmobile Journey from Alaska to Hudson’s Bay.”

Some may think research is confined to a lab, but Sturm’s studies of snow and the Arctic have taken him all over the world, often on the back of a snowmachine.

“I don’t look like a motorhead but I have probably 40,000 miles under my belt,” Sturm said.

These trips have taken him from Nome to Utqiagvik and across Canada. Along the way, Sturm has researched almost every aspect of snow, recently to include the reflective properties of snow across the entire known light spectrum.

“We quickly realized that you can look in your backyard, which is cool, but for the big problems humans face, whether it’s climate change, water, anything, then you have to look at snow on a very large scale,” Sturm said. “Snow reflects 80% of solar energy, it’s the radiator of planet Earth. So as the amount of Earth that’s covered by white changes, our ability to get rid of heat changes. Those are some of the issues that need to be attacked on a very big scale. It’s not enough to know what’s happening in Goldstream Valley; we have to know what’s happening in all of Alaska.”

Sturm pointed out the connection between research done through the university system and many of the state’s successes throughout its history, from the knowledge behind Aurora viewing tourism to the trans-Alaska oil pipeline and oil exploration.

“Snow is going to play a big role in what happens in the Arctic Refuge, for example, because that’s all going to get done in the winter,” Sturm said. “Well that’s going to require certain snow conditions, up there the issue will be not how much snow but the strength of the snow. They need to know what conditions they could run into our there. We’re really involved in that research and that stands to benefit the state.”

In working with four graduate students this year, Sturm says he is kept on his toes, in a good way, noting that the students give him hope for what appears to be an unknown future these days.

“I mean, these students are the future of Alaska and that’s what is so tough about this time right now. This place has been educating Alaskans since 1917,” Sturm said. “And I see it every day, these people are young, they’re energetic, they have new ideas, they’re really the hope of the state. That’s what is so tough about seeing someone essentially trying to tear it down. I don’t understand it.”