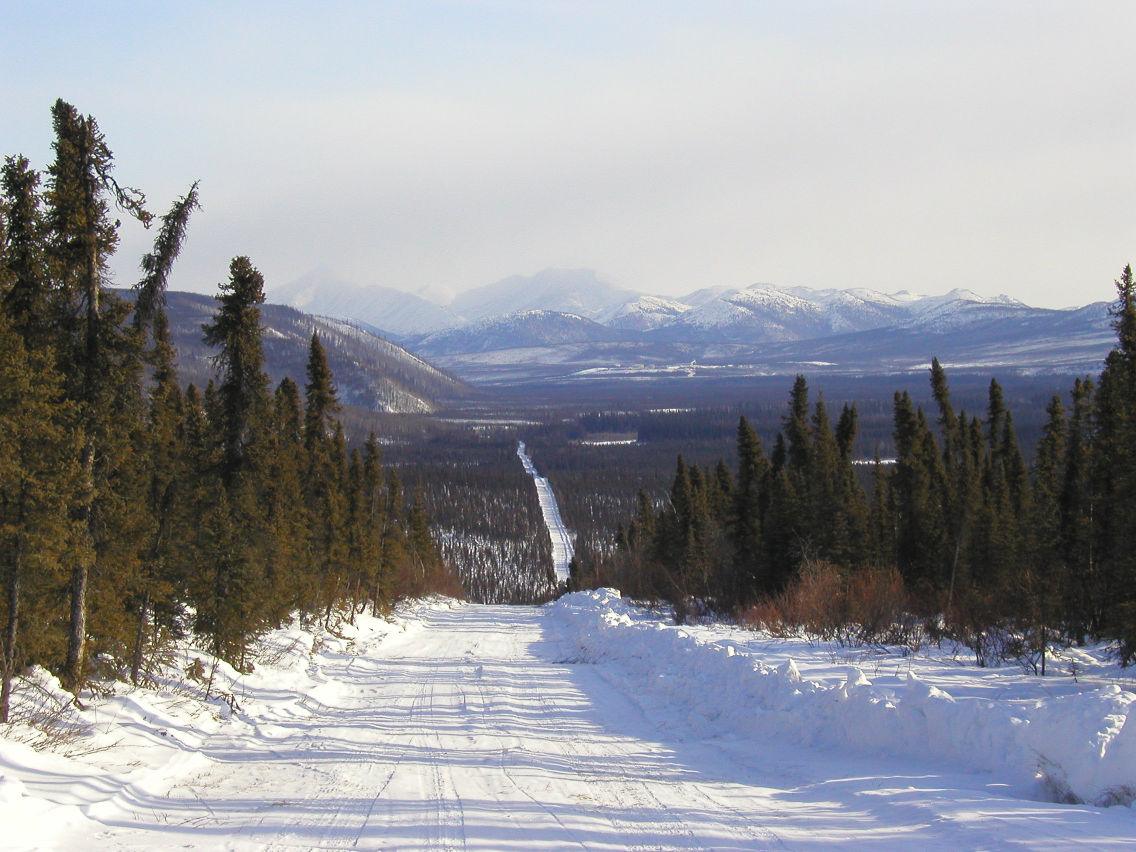 This undated photo shows the Bettles winter road about halfway from the village to its access point along the Dalton Highway at Prospect. 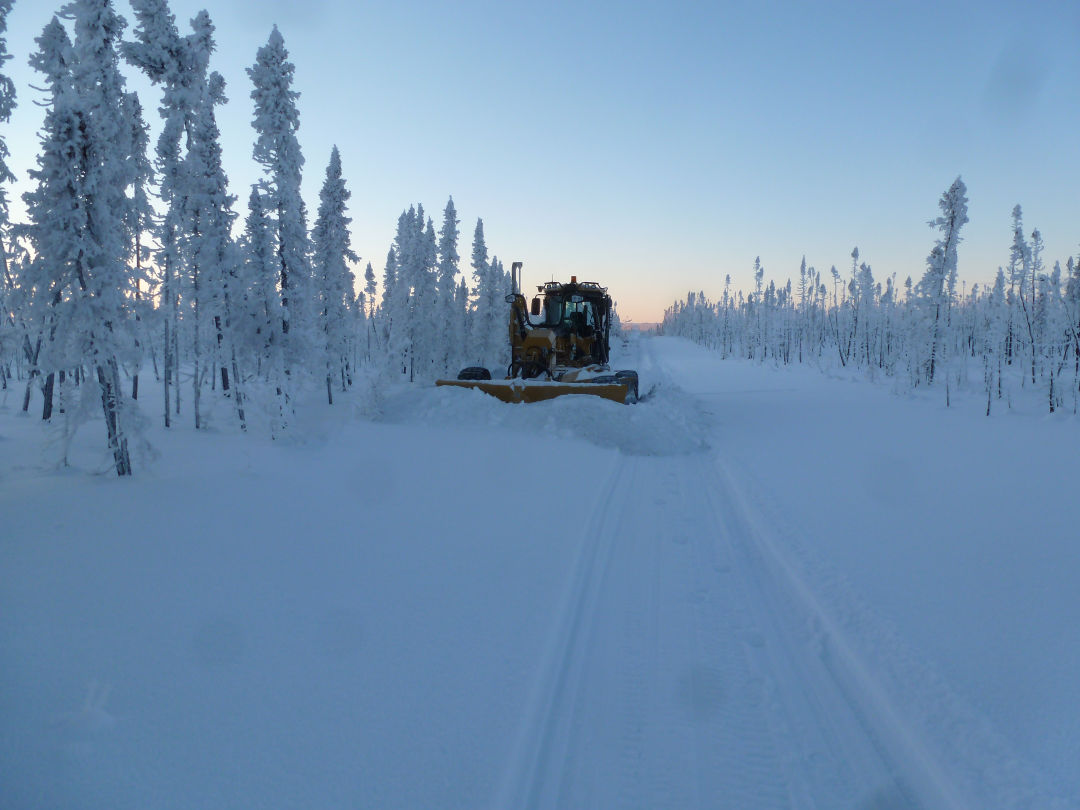 A road grader is used by the city of Bettles to clear winter road from the village to the Dalton highway near Prospect. For the early part of the winter, the route is only a snowmobile trail. 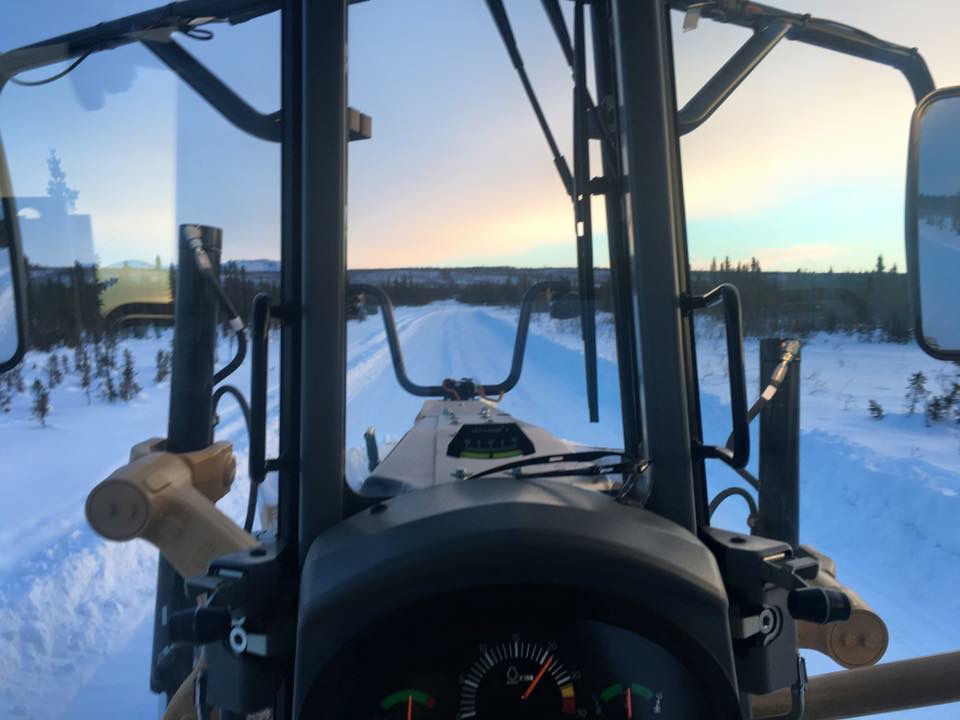 This undated photo shows the road grader operator’s view while plowing the Bettles winter road from the village to the Dalton Highway.

This undated photo shows the Bettles winter road about halfway from the village to its access point along the Dalton Highway at Prospect.

A road grader is used by the city of Bettles to clear winter road from the village to the Dalton highway near Prospect. For the early part of the winter, the route is only a snowmobile trail.

This undated photo shows the road grader operator’s view while plowing the Bettles winter road from the village to the Dalton Highway.

FAIRBANKS — For a couple of months each winter, two tiny Alaska communities rely on an ice-road lifeline across the frozen landscape.

Without their seasonal connection to the Dalton Highway, the 20 people who spend the winter in Bettles and Evansville would be hard-pressed to make ends meet given soaring energy costs, according to community leaders.

“We can save at least $1.50 per gallon on gas or heating oil hauled by truck compared to the cost of fuel that’s shipped in by air,” said Mayor Heather Fox, owner of Bettles Lodge. Not only is the fuel savings significant in a town where gasoline sells for $8 a gallon,  she said, many residents use the 27-mile seasonal road to freight a year’s worth of household supplies and fuel from Fairbanks.

Richard Thorne, Bettles road and trails chief, estimated the ice road costs the city about $25,000 to $50,000 to build. He estimates investment saves residents and business owners of his town, and nearby Evansville, more than $600,000 per year.

The ice road, which connects Bettles to the Dalton highway near milepost 135 at Prospect, has been open to the public since the first weekend in February, according to Thorne. Besides four-wheel drive pickups, the ice road is used by large semi-truck tankers that haul in a year’s supply of diesel for the community’s electric generators, owned by Alaska Power and Telephone.

AP&T Operations Manager Michael Henton, said his company realizes significant savings on fuel, lubricating oils, and other power plant supplies. “It’s a huge savings for us and a savings for our customers,” he said.

The annual ritual of building the ice road began in early January this year, and took about a month for completion. Construction proved unusually challenging, Fox said, owing to mild temperatures.

Instead of gravel, builders use snow and ice to make the road. Bradley Storm, former road and trails chief, said that snow is packed into “snow bridges” to fill the gullies and dips.

In addition two “ice bridges” are needed to span the frozen Jim River and South Fork of the Koyukuk River. Storm, who helped build the road from 2012-2014, said the ice must be at least 2-feet thick to support trucks, or else river water needs to be pumped atop the ice to thicken it.

Among the challenges Storm faced over the years were overflow icing, not enough snow to pack the surface, temperatures not cold enough to freeze the river crossings, and thin ice that required him to build the ice bridges thicker.

“Usually you like it to be at least 20 below zero,” he said.  “So when you spray the water out of the hose into the air, in a mist, as it falls to the river ice, you can almost hear it tinkle as its freezing when it comes into contact with the ice.”

Temperatures colder than 30 below bring problems with the water pumps and hoses freezing up, plus the grader can have sluggish hydraulics and flat tires.   Storm also said he and the other grader operators had to be careful to plow excess snow to the downwind side of the road, reducing drifts.

The Bettles winter road is sanctioned by the two land owners whose land it crosses, Evansville Native corporation, and a portion of federal land called the “Utility Corridor” that parallels the trans-Alaska oil pipeline.

The city’s permit from the Bureau of Land Management allows travel to begin only when the road is officially declared open. That opening occurs when 6 inches of packed snow has been attained on their lands, according to both Tim Lamarr, Area Manager at BLM, Fairbanks, and Mayor Fox.

Building the winter road took a month this year.  If all goes well it can be done in just three weeks, but if nature does not cooperate it can take up to six, according to Storm.

The ice road only stays open one to two months, just long enough to get the fuel and heavy supplies moved.

Sometimes the winter road is as smooth as the Dalton Highway and can be navigated in an hour, Storm said.

In years marked by less than ideal snow packing and overflow ice conditions, it sometimes can be a six- to nine-hour ordeal, according to Frank Thompson, first chief of Evansville.

Recent travelers are reporting transit times of about an hour and a half.

Anyone contemplating a trip must be prepared for the worst types of conditions and significant delays, the road-construction veterans said.

Travelers should carry tire chains and be self-sufficient with survival gear in case they get stranded mid-way on the road, they said. Drivers are warned to carry enough fuel for their return trip back to the Dalton, because it is not always available in Bettles.

In 2013, a mid-summer forest fire thawed permafrost, resulting in mud slides that later turned into impassable frozen obstacles, Storm recalled. The past two winters road builders struggled to find a detour that big trucks could go around — no sharp turns and not too steep a grade.

That problem was solved in the last few weeks, Thorn said.

Proposed cuts to state revenue sharing funds might put the road in jeopardy, according to Mayor Fox. She estimates the city could perhaps endure one more year of such cuts, but after that, the community may not have the resources needed to reopen it.

Fox credits Evansville Inc., for permission to cross their Native lands, and for construction assistance. With a winter population of only 20 people in the pair of villages, she said, every bit of help counts on a project as challenging as the winter road.

Road builders do enjoy a few natural perks. “Some really good northern lights, some really beautiful sunrises and sunsets,” recalled Storm, who has spent many memorable days and nights operating the grader. “You’re just out there by yourself and there’s no one else around, no signs of human inhabitants.”