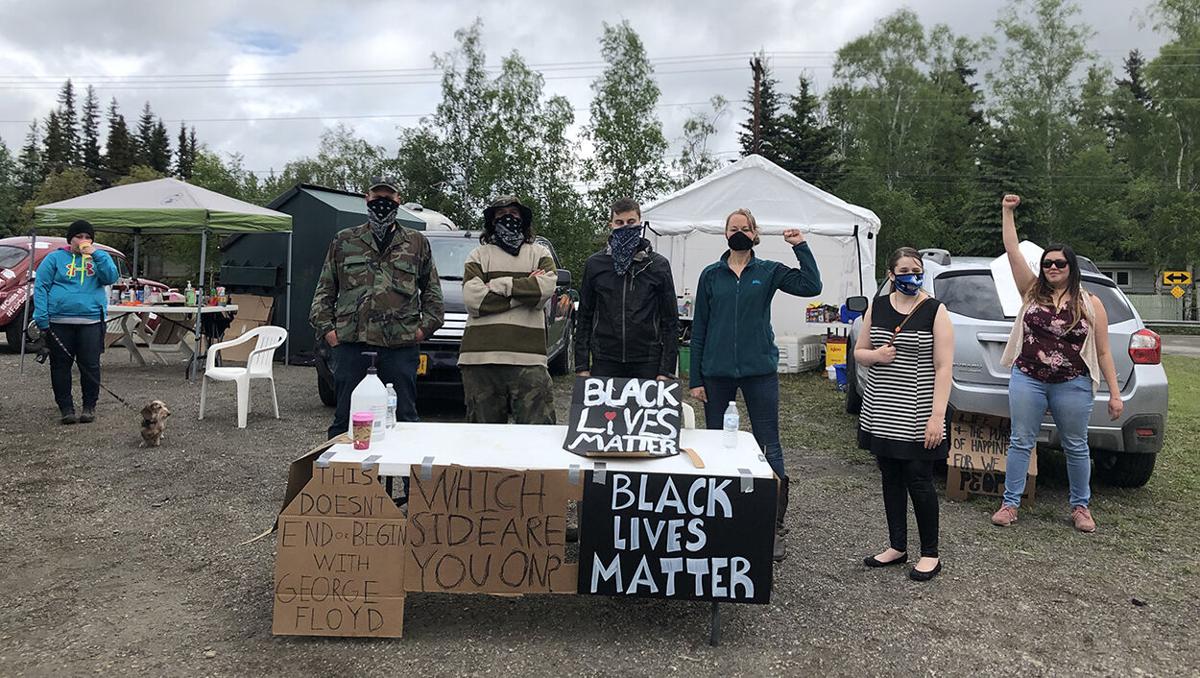 Supporters of Black Lives Matter pose at their pop-up camp on Wednesday near Fairbanks Espresso. Several of them declined to be named. Amanda Bohman/News-Miner 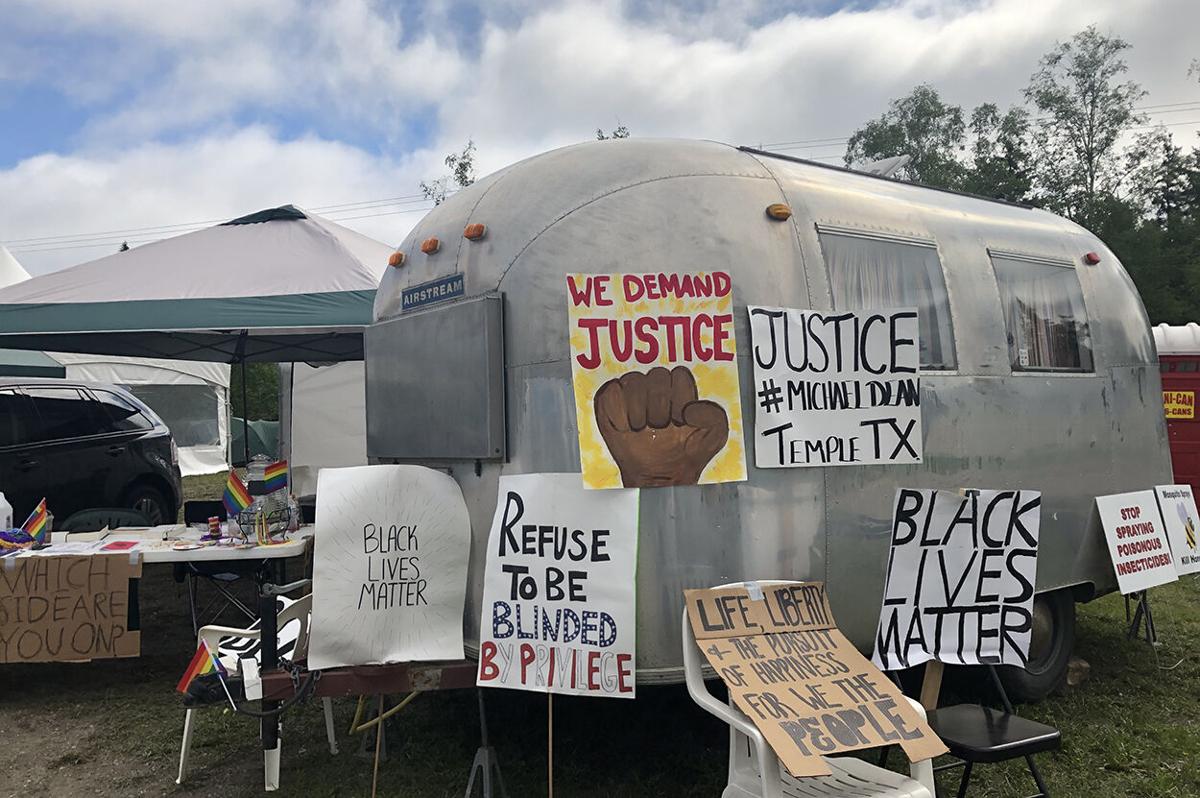 A trailer is parked at the Black Lives Matter pop-up camp near Fairbanks Espresso. Amanda Bohman/News-Miner

Port-a-potties can be seen at the camp a Black Lives Matter group has set up near Fairbanks Espresso on Thursday, June 4, 2020. Amanda Bohman/News-Miner 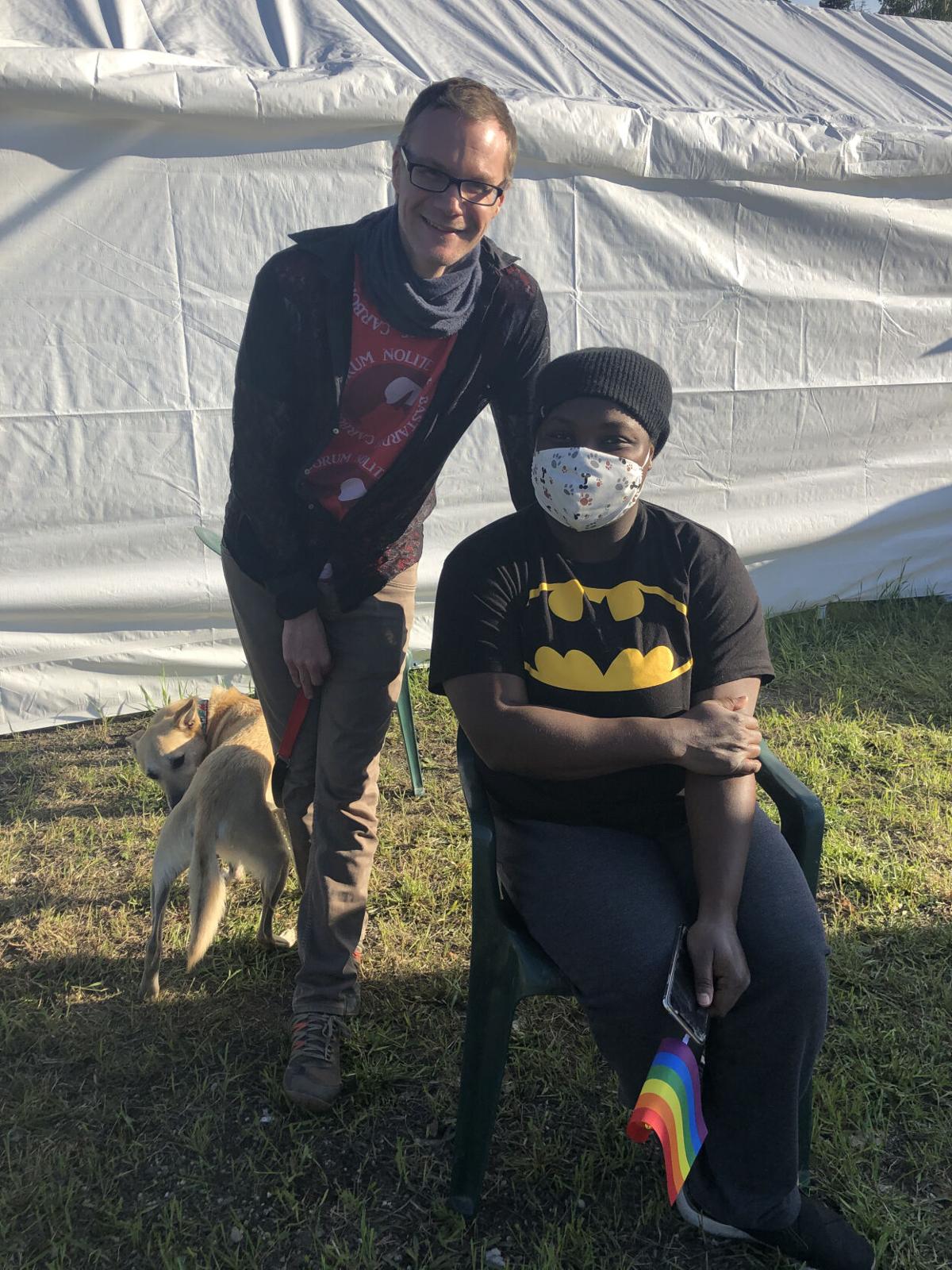 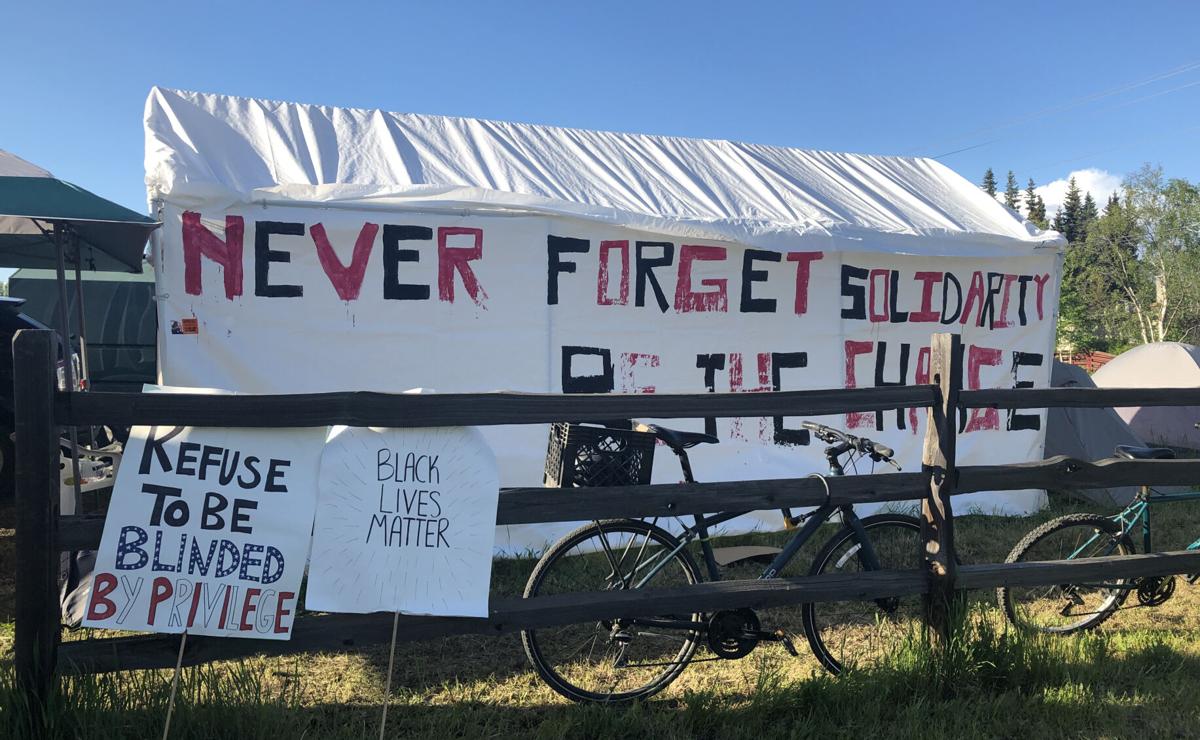 This tent set up at the Black Lives Matter pop-up camp near Fairbanks Espresso reads "NEVER FORGET BE THE CHANGE" on Thursday, June 4, 2020. Amanda Bohman/News-Miner

Supporters of Black Lives Matter pose at their pop-up camp on Wednesday near Fairbanks Espresso. Several of them declined to be named. Amanda Bohman/News-Miner

A trailer is parked at the Black Lives Matter pop-up camp near Fairbanks Espresso. Amanda Bohman/News-Miner

Port-a-potties can be seen at the camp a Black Lives Matter group has set up near Fairbanks Espresso on Thursday, June 4, 2020. Amanda Bohman/News-Miner

This tent set up at the Black Lives Matter pop-up camp near Fairbanks Espresso reads "NEVER FORGET BE THE CHANGE" on Thursday, June 4, 2020. Amanda Bohman/News-Miner

A camp of Black Lives Matter supporters has sprung up next to a Fairbanks coffee hut that came under fire after one of the owners tampered with the burrito of a customer who supports President Donald Trump and the incident went viral.

The Black Lives Matter supporters described the burrito incident, in which a note was written to the customer to never return, as a “bold and righteous anti-racist action” in a Facebook event page created for the camp. They said threats were made to Fairbanks Espresso and they are watching over the business, while also hosting Tai Chi classes and observing LGBTQ Pride Month. The espresso stand is located near the intersection of the Steese Expressway and College Road.

A group of about 20 people congregated Wednesday on a grassy area where they erected tents, a generator was running and donations of food and water were being dropped off. Signs posted say “Black Lives Matter,” “Refuse to be blinded by privilege” and “We demand justice.” Portable toilets in rainbow colors were delivered to the camp on Thursday morning.

The camp is wired with video cameras. Inhabitants plan to stay until Saturday or until they think the coffee stand is safe. It stems from an incident in which coffee hut owner Caitlin Gonzalez, who reportedly closed the business on Saturday to participate in a civil rights march, told a reporter with KTVF Channel 11 that she felt like she had to say something on Monday when a customer came through promoting his support for the president. So she wrote a note.

A photo posted online shows a message written on foil in red ink: “I saw your MAGA hat and sign. #Black lives matter. Don’t come here again.” Some of the ink bled onto the burrito. Gonzalez said she regretted that.

Gonzalez could not be reached by the Daily News-Miner.

The incident sparked a fury of comments and criticism on Facebook and other online platforms.

Teal Soden, communications director for the city of Fairbanks, said Gonzalez reported that she had received “disturbing comments, what she viewed as threats, in response to the burrito incident.

“The threats were not sufficient enough to meet any criminal component, so no charges are being filed at this point, but she was advised to remain vigilant and report suspicious activity by calling the FPD business line or 911 if it is an emergency.”

Soden was also asked if a complaint was filed about the tampered burrito. She mentioned none, but the coffee hut was reported to the Alaska Department of Environmental Conservation, which investigated.

The marker used on the foil was certified non-toxic, according to the DEC.

“In a situation such as this where there is no imminent health hazard, DEC’s approach is to begin with education and only move on to progressive enforcement if it is needed due to continued non-compliance with food safety standards,” a statement from the DEC reads.

“The owner stated that she did not realize that the ink would transfer to the food when she wrote on the foil wrapper. DEC discussed best practices for sanitation and confirmed that the owner is now aware that using [a] marker to write on the inside of a foil wrapper may cause it to transfer to food. DEC has not received any other credible complaints regarding Fairbanks Espresso and considers the matter concluded.”

Bennie Colbert, president of the local chapter of the National Association for the Advancement of Colored People, said he encourages people on all sides to peacefully disagree.

“We don’t want any violence to erupt within our community,” he said. “We can be better than what we are seeing on television.”

As it happens, his real estate office is across from the pop-up Black Lives Matter camp.

“I think that this ‘Burritogate’ thing has blown completely out of proportion,” Colbert said.

He believes business owners have the right to refuse service, he added.

“I don’t think that the lady meant for her message to bleed through to the burrito,” he said.

Motorists passing by mostly honked in support of the camp, though camp inhabitants reported at least two separate incidents in which a man shouted “white power” from a passing pickup truck. They also said a man stopped on the road, flashed a gun and said he had a bullet for all of them.

An event, “Occupy Fairbanks Espresso,” has been created on Facebook calling on people to visit the camp and “take a stand against violence, threats and racism.”

“We’re informally calling it Lovestock,” said Flyn Ludington, one of the organizers, who said she is working with civil rights groups to come up with a list of public policy demands to promote equality.

Zakeya Mitchell stopped by the camp with Kirk Andrews, who heard about it on the radio Wednesday morning and decided to get his breakfast at Fairbanks Espresso. The camp is in their neighborhood. The roommates visited together after work. Mitchell supports efforts to change systems of oppression, she said.

“He should not be dead,” Mitchell said of the Minneapolis man, George Floyd, who died after a police officer knelt on his neck for 8 minutes and 46 seconds on May 25, sparking protests and riots across the nation from people calling for an end to police brutality.

Mitchell, who is black, said she has heard an outpouring from white friends who are sad about the societal circumstances that led to Floyd’s death.

“I appreciate people’s kindness,” she said. “It feels like it’s about me and not about me at the same time. It’s really hard to deal with that.”

Mitchell does not fear law enforcement, she said, but she is aware of what has happened to other people and is cautious.

“My experience has never been negative,” she said.

Former Fairbanks Councilwoman Tanya Brown, who also visited the camp, said she thinks “an awakening” is underway and that people are ready to pivot toward equity and inclusion.

A local coffee hut has closed after an incident went viral on social media.