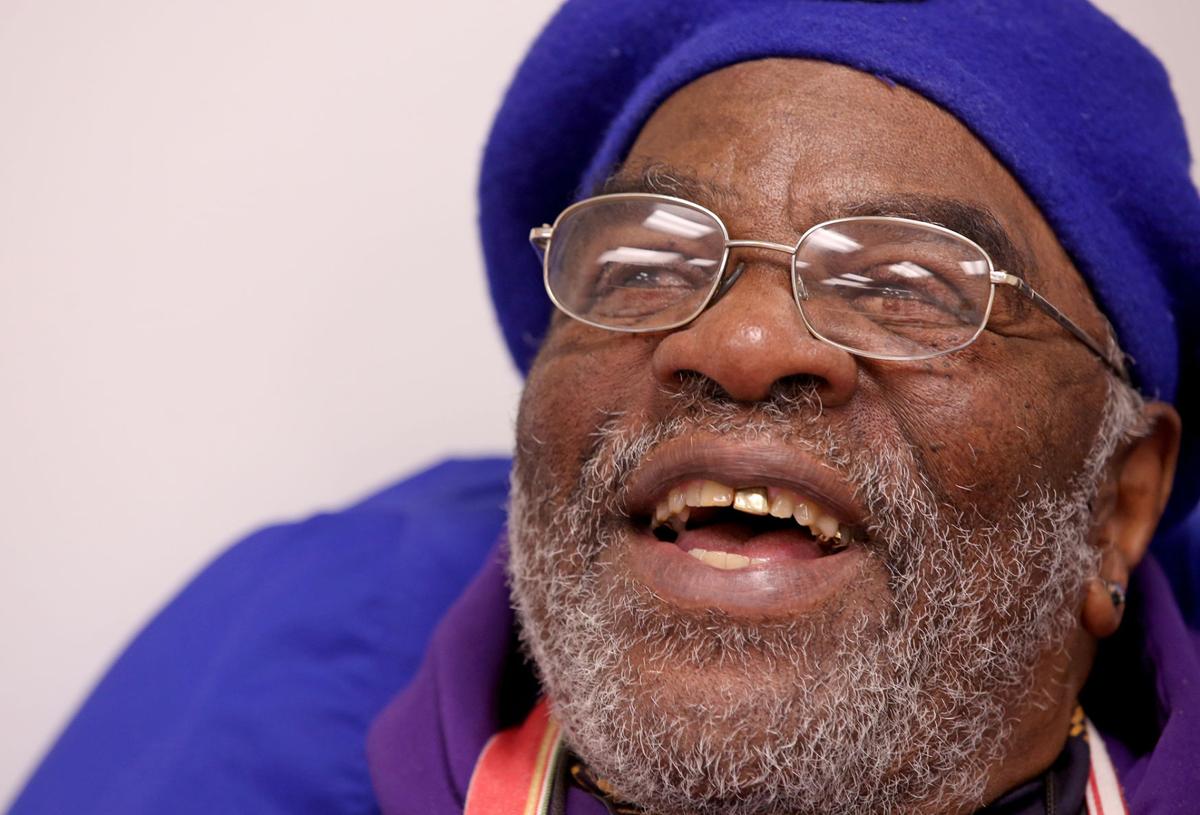 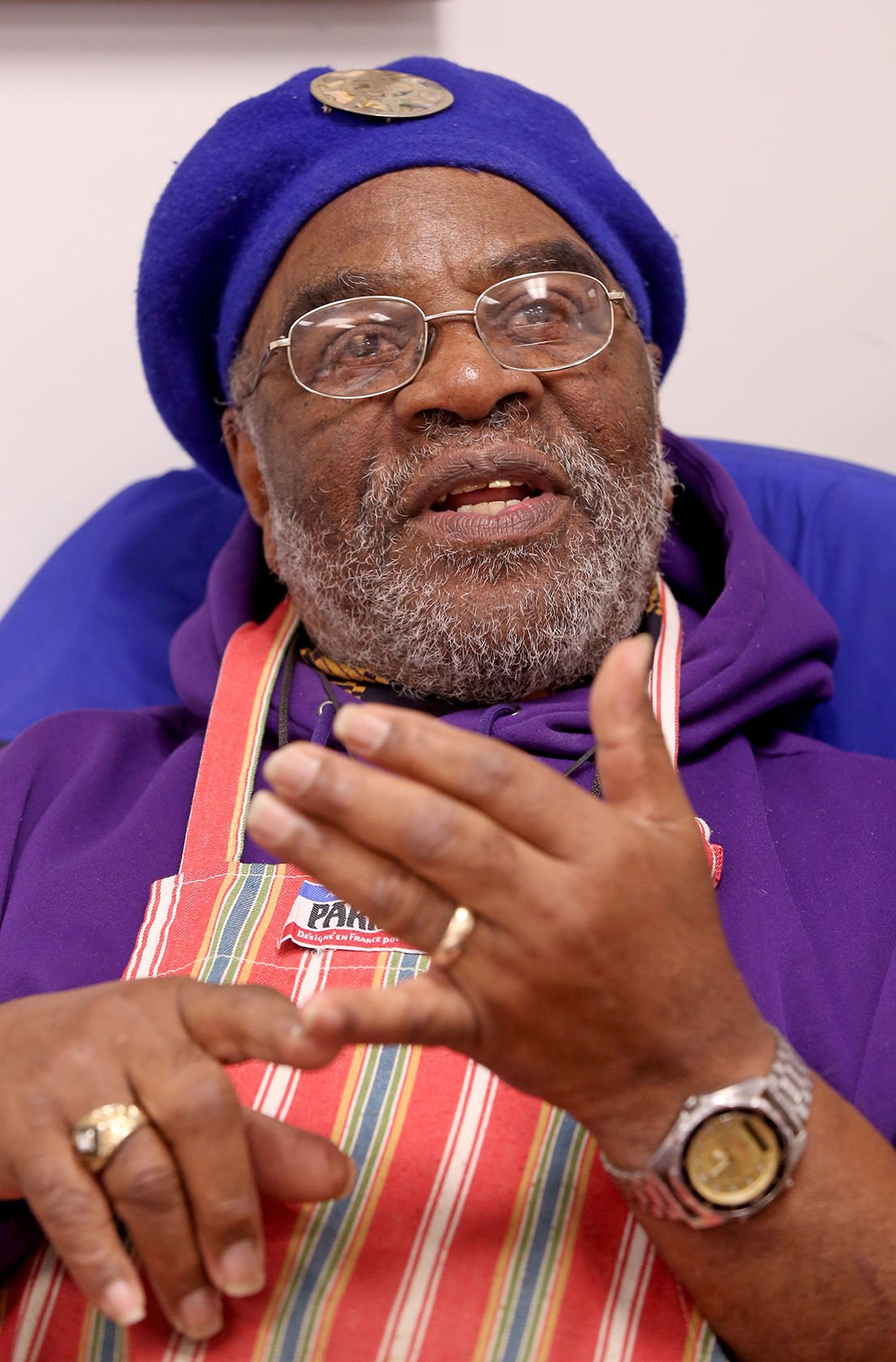 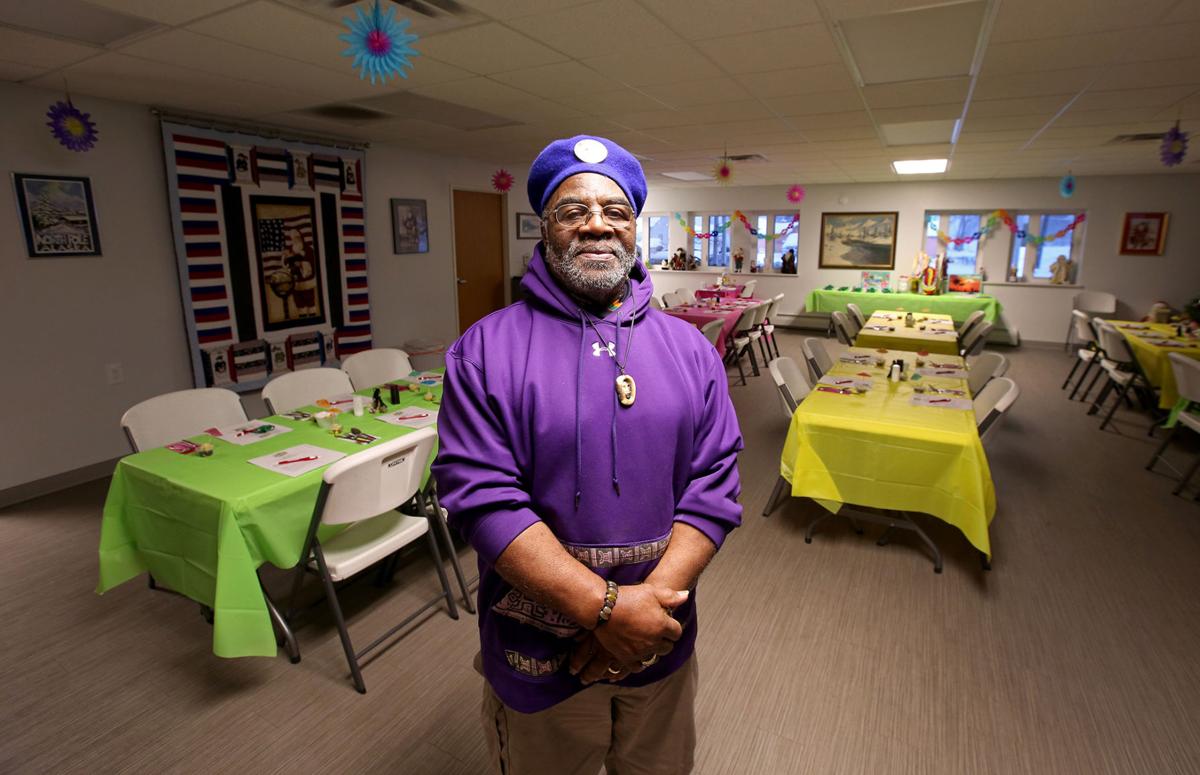 James Hunter talks about his life of religion, activism and volunteerism as he poses in the dining hall of Santa's Senior Center where he works as a volunteer chef Tuesday afternoon, November 19, 2019. Hunter is the Spotlight for the week.

James Hunter talks about his life of religion, activism and volunteerism as he poses in the dining hall of Santa's Senior Center where he works as a volunteer chef Tuesday afternoon, November 19, 2019. Hunter is the Spotlight for the week.

James “Hunter” Hunter’s accomplishments are manifold. He has traveled, earned several degrees, served in churches and established programs that feed and fund those in need. He walks the path of a man who has known hunger and fear and will not allow others to suffer.

Hunter grew up in Virginia in the 1940s and ‘50s. His father was an alcoholic and a wife abuser. His mother was disabled as the result of a stroke. By the age of 5, Hunter had to fend for his three sisters, sometimes having to steal food for them.

At 5 years old, Hunter was placed with a foster family, where he finally had enough to eat.

“The major impact that stayed with me and continues to be with me, is making certain that hungry people are fed,” he said.

This experience was a driving factor for Hunter’s work in civil rights for sharecroppers and in starting Breadline in Fairbanks.

Hunter began his life as an activist at St. Paul’s College. He made friends with student activists from a different university and began to attend marches and protests, including the famed 1963 March on Washington. He also helped to register voters.

On one occasion, while leaving a registration event and rally, a car followed Hunter and his friends and someone in the vehicle shot at them. No one was injured, but the back windshield was destroyed.

Hunter worked both as a cook in the school’s cafeteria and then in the school’s church, cleaning up. He became interested in the Episcopal church and applied to the seminary graduate program at Bexley Hall at Kenyon College in 1966.

His mother wouldn’t let Hunter attend integrated schools growing up, worrying for his safety. Going to that was traumatizing, he said as, “being in a black world for 20-plus years, and all of a sudden, I’m the raisin in the bowl of milk at Kenyon.”

While at Kenyon, he participated in what he called an unsuccessful march with Dr. Martin Luther King Jr. in Peoria, Illinois.

In 1968, Kenyon’s seminary school was moved from Ohio to Rochester, New York. Hunter moved there a few months after King’s assassination.

Hunter and other students were inspired to establish the Martin Luther King Jr. chair, a program that funds the school’s black studies program, as well as scholarships and fellowships there.

A disagreement with the school over the hiring of the first chair and membership on the all-white board led to a 19-day lockout, during which Hunter and his fellow students took over the seminary.

The school gave in.

The Martin Luther King Jr. chair still exists at Colgate Rochester. Last year, the school’s black student caucus held a ceremony honoring those students involved in the lockout on its 50th anniversary. Hunter was given a Lifetime Achievement Award.

Hunter graduated from seminary and was canonically transferred to the diocese in Rochester. He met his wife, Sharron, in 1970, who was working in the church’s summer program. They married in 1972.

Sharron is white. The beginning of their now 47-year union was marked with an uncomfortable request for Sharron’s father’s blessing.

Hunter’s future father-in-law pulled out a lengthy Life magazine article that said interracial marriages didn’t last. He told the couple, once they had the information, if they still wanted to get married, they had his blessing. They still wanted to marry.

Even so, Sharron’s father bet against the union, only conceding they were going to make it after they’d been together 10 years.

Hunter was terminated from his church in Rochester, and, though he wanted to work with the Peace Corps, he was told he had to go a year without demonstrations and protests before they’d accept him.

His high-profile activism had gained him the attention of the House Un-American Activities Committee and the FBI.

He waited out the year, but the Peace Corps still denied him, instead offering him a place in the AmeriCorps VISTA program. He applied to the Bureau of Indian Affairs instead, beginning a period of self-exile in Arizona, where he hoped to start a new, low-key life with Sharron.

The couple traveled throughout the Southwest for a few years before moving to Tuntutuliak, in Southwest Alaska, where they lived for six years.

The Tuntutuliak community accepted the Hunters quickly, giving them Yup’ik names six months after they arrived. They integrated themselves into the community, participating in holidays and activities, hunting with the locals and even helping to build houses.

When it came time to leave, the Hunters made a chart on a pie plate with a few different Alaska towns. They spun a pencil in the plate and it landed on Fairbanks.

Hunter took a few different jobs in Fairbanks, selling vacuum cleaners for Kirby, working for a halfway house and then with Fairbanks Resource Agency. He was then hired as the priest at St. Jude’s, where he worked from 1988-2003.

He helped establish a food pantry at the church through the Jubilee Center. The center also promoted the ordination of gay clergy and the first gay bishop, more minorities on church executive committees and took a position on both climate change and human trafficking.

During this time, he also helped to establish the soup kitchen Breadline. Hunter and a group of volunteers saw a need and started distributing sack lunches on street corners. Eventually they moved to a more permanent location, where they served hot lunches.

After a while, they established a rotating schedule of churches and volunteers to keep the organization running. Breadline is still in existence today, feeding Fairbanks’ hungry.

“I think there continues to be a need for places that feed people,” he said. He fantasizes about opening a pay-what-you-want restaurant with no prices on the menu.

After he retired from his position as priest, Hunter worked for the school district as a graduate success coach until 2008.

He now spends his time volunteering with the church and with Santa’s Senior Center, providing lunch for members. He can be found there several times a week, cooking and socializing.

By shopping frugally, Hunter puts together lunches and dinners for the senior center’s members, many of whom are on a fixed income, for a fair price.

As for his activism, that hasn’t stopped. During the inauguration of President Barack Obama, Hunter walked a similar path to the one he took during the March on Washington in 1963.

“It sort of brought that full circle for me because it was the same ground,” he said.

He worries that the country may be sliding backward and is concerned by the rise of hate groups and the polarization happening across the country.

He continues to advocate for change within his church and to speak up for the hungry and downtrodden.

Hunter hopes that he will be remembered for upholding his personal code of conduct, which he keeps on a handwritten list in his wallet. High on the list is this item: “Give freely, give generously, give abundantly.”

Just ask the members of Santa’s Senior Center or the patrons of Breadline, whose full bellies stand as testament to a full life that continues in warming conversations behind steaming plates of good, filling food.

• Do not speak evil or bad about the absent. They are not there to defend themselves.