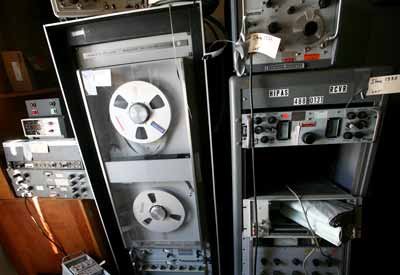 FAIRBANKS — Joe Campbell has prepared for plenty of sales during his years at Fairbanks Auction Company, but he’s never experienced anything quite like the task that awaits him during the next few weeks.

For nearly 30 years, the HIPAS Observatory has been the ultimate remote scientific facility. Far away from its base at UCLA, the Chena Hot Springs Road atmospheric research station spent decades accumulating a vast amount of quirky equipment.

During the next month, Campbell and his crew will try to figure out how to get rid of it all, right down to the buildings at the site.

A collection of high-powered lasers? You bet.

Campbell, whose company won the bid last Friday to coordinate the HIPAS auction, was looking weary while surveying the scene on Monday afternoon.

“This is overwhelming,” he said. “I know by the time I get it all said and done with, I’ll be a lot more knowledgeable.”

HIPAS Site Manager Ron Richards has spent more than a year figuring out just what the facility contains. He said there will be about 1,500 lots of equipment headed to auction, and some of those include hundreds of items.

UCLA had leased the facility from the University of Alaska since 1986. HIPAS, which stands for High Power Auroral Stimulation, was shuttered by the Los Angeles-based university about 20 months ago.

By selling off inventory at HIPAS, the goal is to generate revenue for UCLA while returning the 130-acre site back to roughly its previous condition. That means getting rid of office supplies, heavy equipment, scrap metal, and even the six buildings that have been built at HIPAS.

At one time scientists would travel from all over the world to conduct experiments at HIPAS, staying at a 10-bed bunkhouse at the site. Research on the aurora borealis and energy conduction in the ionosphere kept it humming with four permanent staff members, along with more than 100 local residents who helped work at the facility.

Those years of research left behind an astonishing range of equipment. There’s plenty of mundane stuff, including office chairs, bicycles and boxes filled with worn paperback novels. But amidst them are plenty of oddities — an old Airstream trailer, a set of brand-new microscopes and a jumbo model airplane.

For those willing to do heavy-duty salvage work, Richards estimates there is at least 40,000 pounds of copper on site, and a pair of 1.2 megawatt diesel generators are still in prime condition.

Take a peek inside a seemingly random shed, and you’ll find an old Hewlett-Packard reel-to-reel computer beneath the collapsing roof. And throughout the facility are things so old or obscure they defy categorization.

“There’s a lot of things I don’t know what they are,” Richards said.

Bill Huhn, a longtime former employee at the HIPAS site, will help inventory some of the specialized research equipment so it can be dangled before researchers at other universities. The rest of the items will be sold at an online site, www.proxibid.com, followed by an outcry auction of the remaining items.

Campbell and Richards figure they have about two weeks to get it all in presentable condition. An online auction is tentatively scheduled for April 15, and they hope to get the inventory ready for a public viewing on April 10.

“How are we going to sell some of this stuff, Joe?” Richards asked, as he walked past a shelf full of old computer equipment.

“To the highest bidder,” Campbell said, without missing a beat.