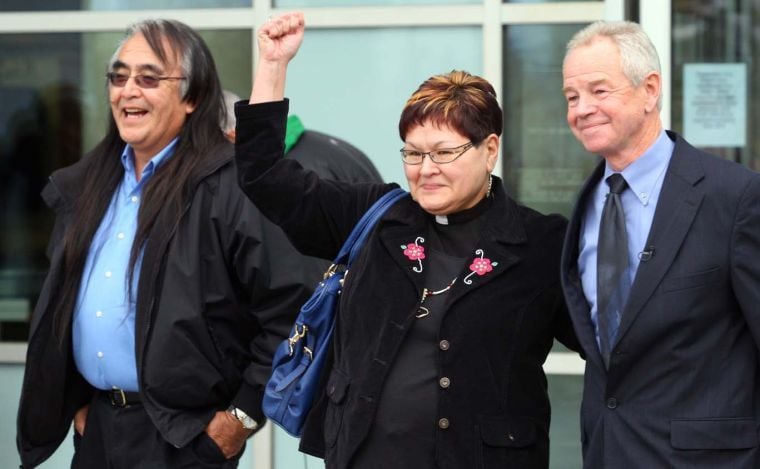 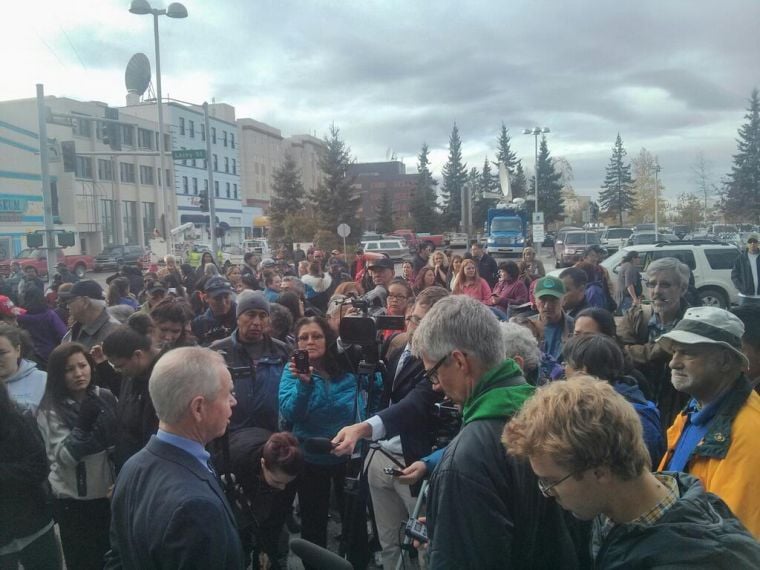 A large crowd of media and supporters attends a news conference Sept. 25, 2013, in front of the state court building in Fairbanks to hear that the Alaska Innocence Project has filed paperwork claiming new evidence, including a confession, in the case of four men the group believes were wrongly convicted in the 1997 beating death of 15-year-old John Hartman in Fairbanks. 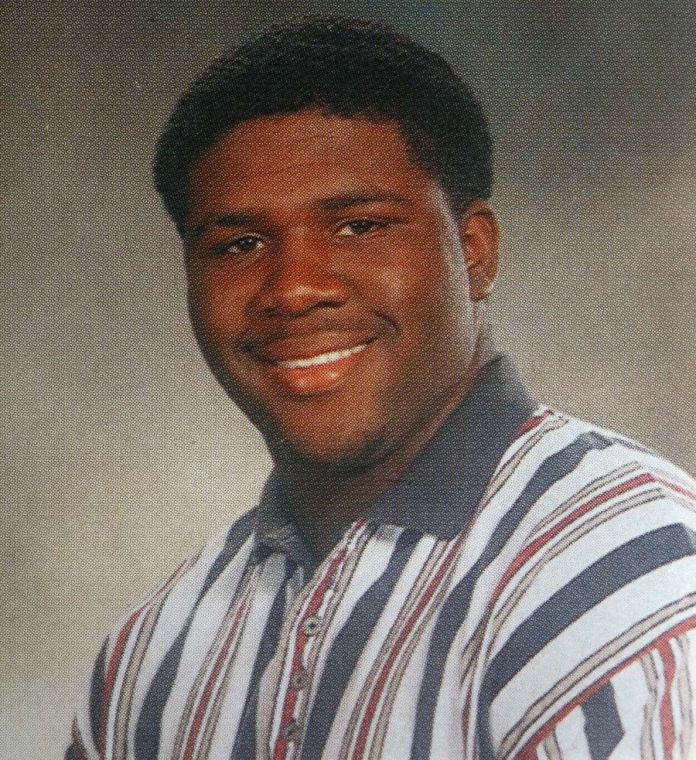 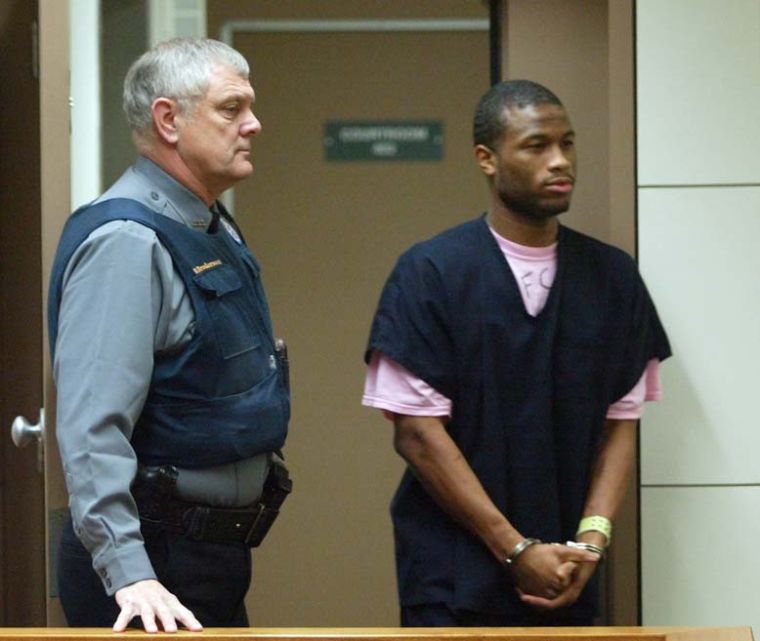 Court Services Officer Bill Broderson, left, holds the door open as Jason Wallace enters the courtroom Tuesday, Nov. 23, 2004, for an evidentiary hearing in the murder for which he is suspect. The defense is trying to suppress Wallace's numerous confessions to killing 25-year-old Teacka Bacote in her Ester apartment and setting it on fire to conceal the crime. 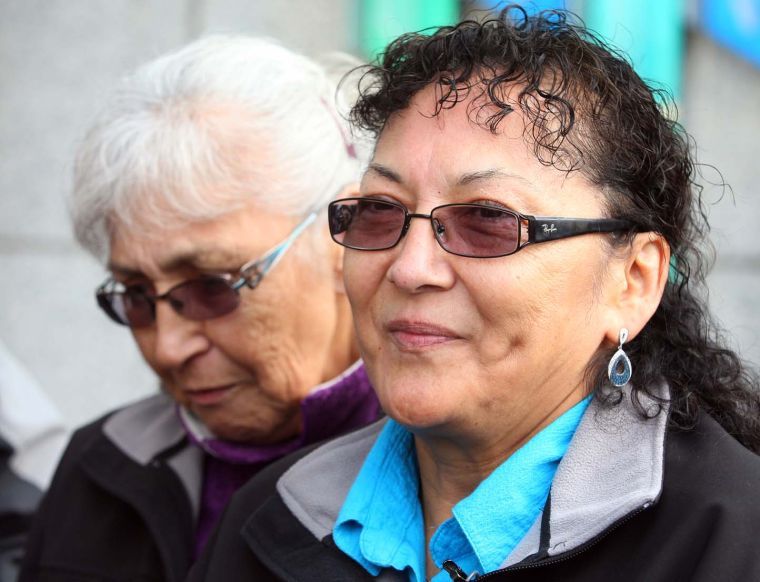 Hazel Roberts Mayo, right, accompanied by her sister-in-law Kathy Roberts, smiles as she answers questions concerning her son Marvin Roberts during a press conference Wednesday, Sept. 25, 2013, at the Rabinowitz Courthouse new evidence may over turn the conviction of her son in the murder of John Hartman. 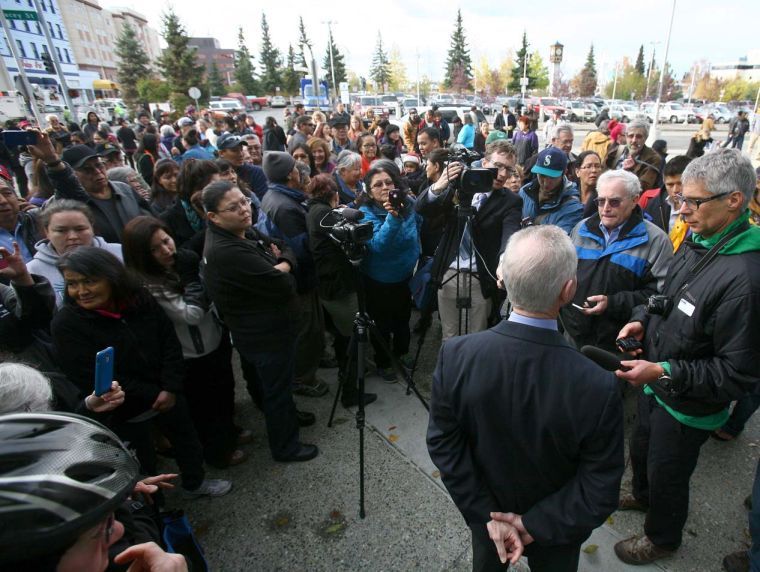 A large crowd of media and supporters attends a news conference Sept. 25, 2013, in front of the state court building in Fairbanks to hear that the Alaska Innocence Project has filed paperwork claiming new evidence, including a confession, in the case of four men the group believes were wrongly convicted in the 1997 beating death of 15-year-old John Hartman in Fairbanks.

Court Services Officer Bill Broderson, left, holds the door open as Jason Wallace enters the courtroom Tuesday, Nov. 23, 2004, for an evidentiary hearing in the murder for which he is suspect. The defense is trying to suppress Wallace's numerous confessions to killing 25-year-old Teacka Bacote in her Ester apartment and setting it on fire to conceal the crime.

Hazel Roberts Mayo, right, accompanied by her sister-in-law Kathy Roberts, smiles as she answers questions concerning her son Marvin Roberts during a press conference Wednesday, Sept. 25, 2013, at the Rabinowitz Courthouse new evidence may over turn the conviction of her son in the murder of John Hartman.

FAIRBANKS—A 33-year-old Fairbanks man serving a double-life sentence in California claims he and a carload of Lathrop High School friends got away with killing John Hartman 16 years ago.

In a sworn statement filed Wednesday in Fairbanks Superior Court by the Alaska Innocence Project, William Z. Holmes, in Lathrop’s class of 1998, names convicted murderer Jason Wallace and three other school friends as accomplices in the killing.

The statement is part of what the Alaska Innocence Project and other supporters of the so-called “Fairbanks Four” characterize as new evidence warranting not only new trials but also exoneration of the local men serving time for Hartman’s murder — Marvin Roberts, Eugene Vent, Kevin Pease and George Frese. The four men were convicted in trials in Anchorage and are serving lengthy prison terms. Pease was sentenced to 79 years in prison, Frese to 77 years, Vent to 38 years, and Roberts to 33 years.

In the hand-written letter included in Wednesday’s filing, Holmes states that he and the others gathered at an apartment one Friday in October 1997, then piled into a car together and drove downtown to “have some fun” messing with “drunk natives.” After chasing a pair of intoxicated men who got away, the group cruised another 20 minutes before happening upon the “white boy walking alone” on Barnette Street.

“We all got excited and say, “We got one!” the inmate’s August 2012 letter to the Alaska Innocence Project said.

Hartman, 15, was found by a passing driver shortly before 3 a.m. Saturday. He remained in a coma until his death Sunday evening.

Holmes said he first learned that Hartman had died from the beating when Wallace showed him a story in the Daily News-Miner the following Monday. “Panicked, I told him to leave the other three guys to me to talk to, and for him to act as if that night never happened.”

In a follow-up affidavit given to the Innocence Project in September 2012, Holmes said that after police arrested and charged other suspects, “I realized that we could keep from being held responsible for what happened to this boy.”

Holmes said he again individually warned the others to keep quiet and that he subsequently only discussed the killing, in general terms, with Wallace, his partner in a 2002 interstate drug-murder conspiracy.

Specifics differ about each of the bids for a new trial in keeping with prior appellate decisions: Roberts filing, for example, cites new forensic standards challenging the 1999 trial testimony offered about a suggestive footprint exhibit. Advances in science also figure in the Innocence Project’s criticism of key witness Arlo Olson’s claim that he saw Roberts, Vent, Pease and Frese — two of whom he had never met — mugging a man more than 500 feet from where Olson stood, after midnight, in a “half-shot” state from drinking for several hours.

Oberly and Tanana Chiefs Conference representatives briefed the Fairbanks Police Department and district attorney on the Holmes’ statements and the supporting evidence on Monday.

“There wasn’t much response, but it was the first time they’d heard it, so I didn’t expect there to be,” Oberly said.

Police Chief Laren Zager, who describes himself as a relative newcomer to the Hartman case with “no dog” in the long-legal fight, said it’s the district attorney’s call whether the new filing warrants reopening the investigation.

“If the DA’s office suggests we do it, the Fairbanks Police will respond with vigor,” he said. “The last thing any officer wants to see,” he added, “is an innocent person sitting in jail.”

The Alaska Department of Law issued a cautious statement.

“While the parallel convictions in three separate trials provides compelling evidence indicating the correct individuals were held accountable, any new information which may be provided by the Innocence Project should and will be thoroughly reviewed and investigated,” the statement reads.

Besides Holmes, the court filings name four other alternative suspects: two are incarcerated for other murder convictions — one in Washington and one in Alaska. Neither cooperated, Oberly said.

The remaining two people named in Holmes’ confession are not in custody and were not contacted by the Alaska Innocence Project. Oberly said he did not want to interfere with any future police investigation.

Holmes’ confession is backed by an affidavit from Scott Davison, another Lathrop contemporary, who describes hearing Wallace brag about the attack only days later.

Wednesday’s filing refers to an additional sealed-brief requesting the court to lift confidentiality surrounding other statements from Wallace that the Alaska Innocent Project believes may lend further credence to the new accusations from old friends.

The young man trying to change tickets for an earlier plane wore a singed hat, stank of gasoline and had burns on his face and one hand. He was detained before boarding the Washington state-bound flight out of Fairbanks International Airport Dec. 27, 2002.

Wallace, 22, soon confessed to troopers that he had stabbed a friend with a screwdriver in the neck, killed 25-year-old Teacka Bacote with a hammer, and torched her Ester apartment to cover his tracks. He also fingered Holmes as the “mastermind” of an interstate plot to steal $80,000 cash meant for their gang’s planed cocaine purchase.

Holmes, fellow Lathrop alumni Hakeem Bryant, 25, and Christopher Martin, 27, of Olympia, had all left Washington that Christmas Eve riding together in a rental car bound for California. Bryant and Martin were found within days shot in the head, their bodies located off the side of Interstate 5 a half-mile apart. Holmes had been picked up after the rental car was found burning — but not quite enough to destroy an Alaska souvenir that led investigators to him.

Wallace told Judge Mark Wood in February 2007 that Holmes had threatened to kill Wallace’s wife if he didn’t go along.

The “greed motive was ever-present” as well, the judge observed, sentencing Wallace “up to 99 years.”

In April 2011, former Lathrop student Scott Davison, 32, took stock of a life derailed by robbery, assaults and habitual drug use and broke years of silence concerning a skip day with friends back in 1997.

“We were driving around and smoking marijuana,” he states in an affidavit included with Wednesday’s court brief. “We were riding around Fairbanks when Jason said to Matt and me that he had been involved in the attack on Hartman.”

Davison said Wallace told them that Holmes and a driver Davison only recalled as “Harold” came upon Hartman walking along Barnette Street, jumped out of their Ford Tempo, then “beat and left him on the side of the road.”

Then came a warning, according to Davison’s statement.

“Jason then said if we told anyone about the Hartman assault, he would kill both of us.”

Davison’s friend Matt insisted in a 2011 interview that he didn’t know Davison or Wallace, or had recollections of any such conversation.

Interviewed not long after, Janet Davison had no trouble placing her son Scott’s old school friend. “Matt still comes around and hugs me. He acts like I’m his mom.”

As for her son’s April 2011 affidavit, Davison quietly reviewed it at the time, shaking her head. Brave or not, she wished he kept quiet about the Hartman case. “This is my son’s death warrant,” she said.

Former News-Miner reporter Brian O’Donoghue, a journalism professor at the University of Alaska Fairbanks, wrote a seven-part investigative news series called “Decade of Doubt” about the Hartman murder case. The series, produced with assistance from O’Donoghue’s journalism students, was published in the News-Miner in July 2008.

FAIRBANKS—Gov. Sean Parnell said Thursday that the Alaska Department of Law is reviewing the new revelations filed Wednesday regarding the 199…