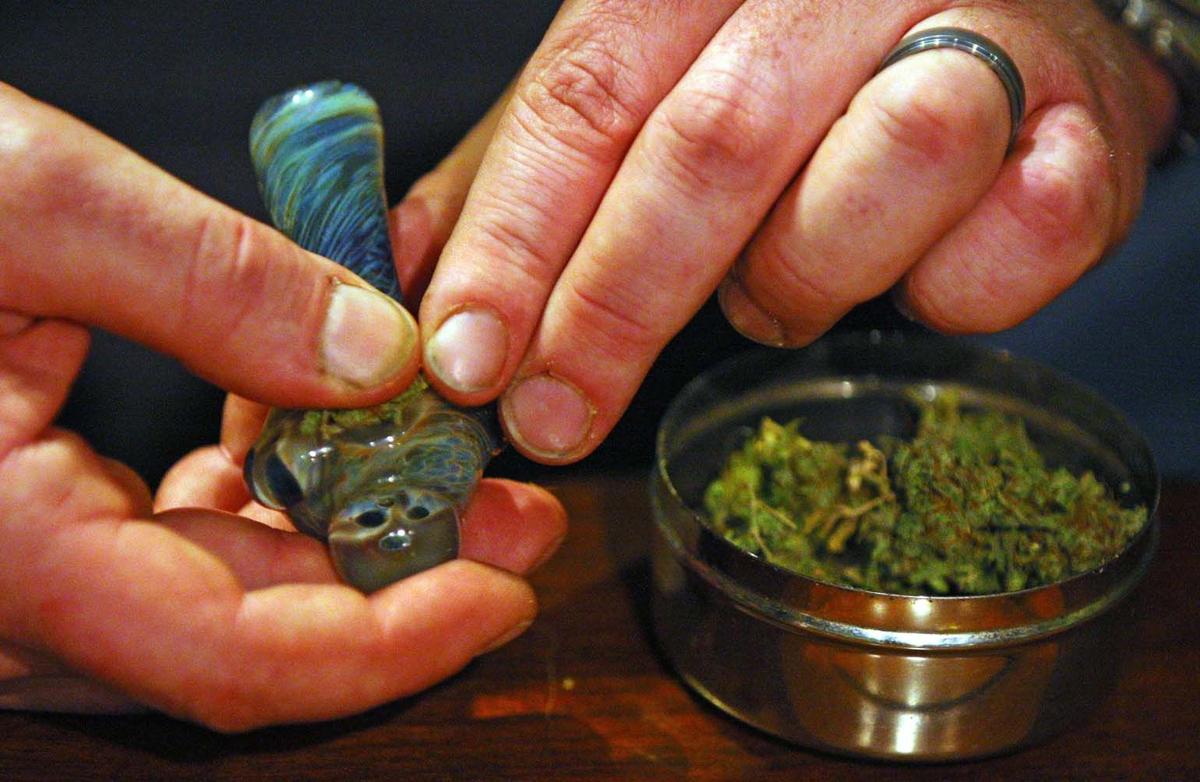 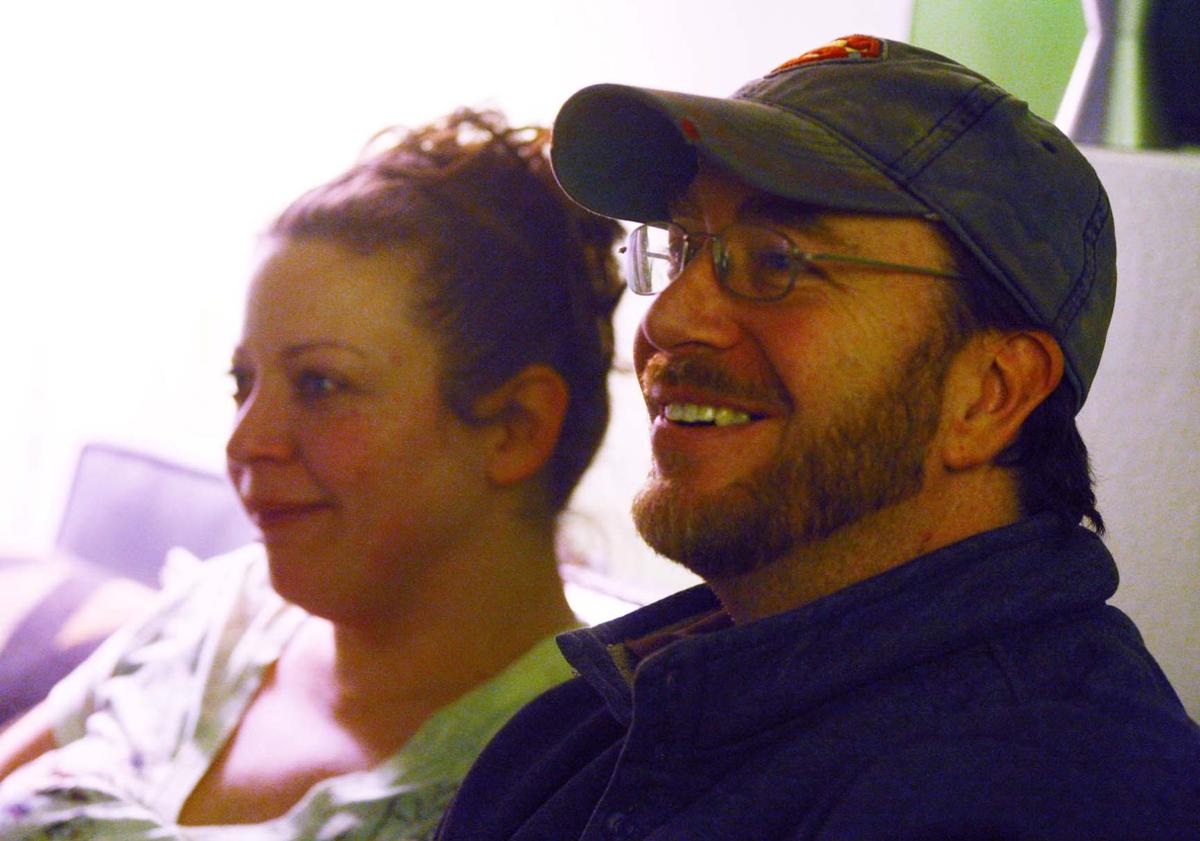 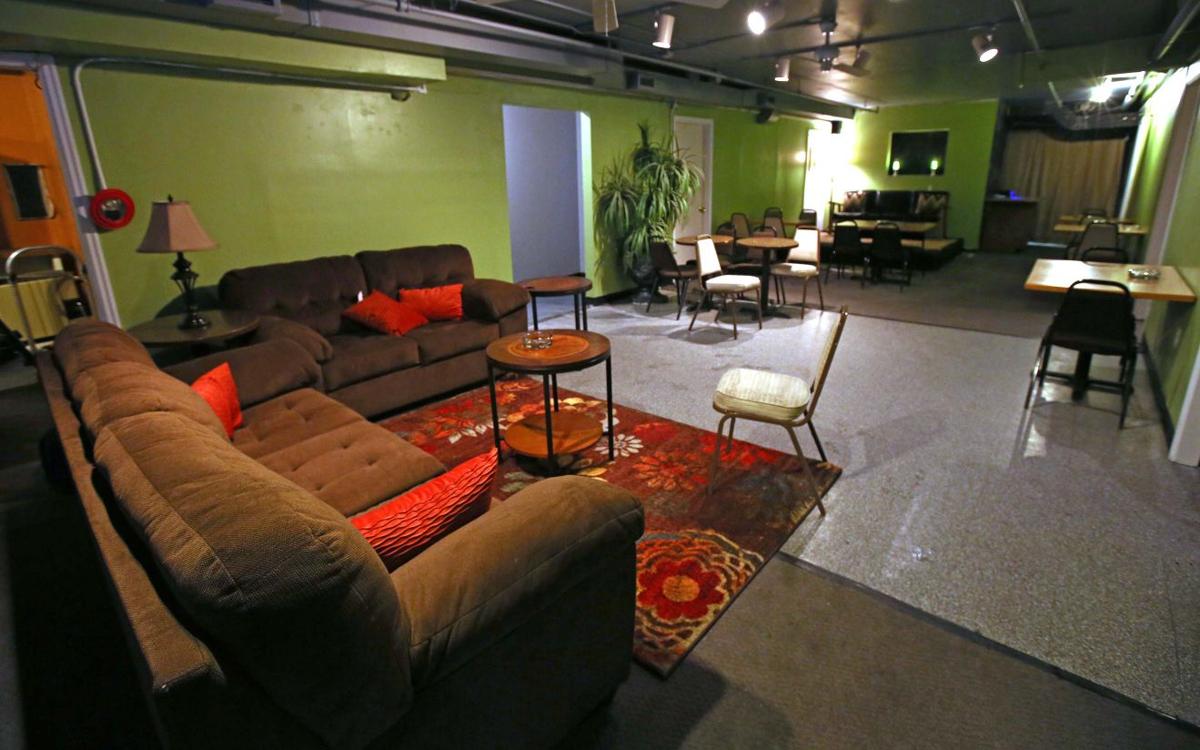 The Higher Calling Club, a private club for cannabis enthusiasts, opened for business on First Avenue on Monday afternoon in downtown Fairbanks.

The Higher Calling Club, a private club for cannabis enthusiasts, opened for business on First Avenue on Monday afternoon in downtown Fairbanks.

Under its new ownership, the merlot red walls of the former Cafe Alex have been repainted an herbal green and the interior is furnished with overstuffed couches, a foosball table and a small stage. Business owners Marcus and Megan Mooers set out coffee and doughnuts.

“We’re going to have the whole cafe feel to it is what we’re looking for,” he said. “As you can see, we’re trying really hard not to just run some kind of stoner slum house.”

The owners greeted about a half dozen new club members who came in during the first hour. The customers paid either a daily $10 rate or $25 monthly rate to join the club and then went into a side room to smoke.

Under the business’ policy, club members can smoke pot or eat pot-infused foods inside the club, but cannot buy or sell it. They’re also not allowed to smoke tobacco inside the building.

But social clubs like The Higher Calling Club aren’t retail shops. Marcus Mooers argues his business is legal because it doesn’t sell pot and isn’t a type of business that Alaska’s 2014 voter-approved marijuana law specifically prohibits.

A previous Alaska pot business that tried to get into the business early — marijuana delivery service Discreet Deliveries — was the target of law enforcement raids this year.

Repeated calls to staff members of Alaska’s Marijuana Control Board for clarification about Alaska’s marijuana laws were not immediately returned Monday.

On Friday, the pot board voted to repeal an explicit ban on social marijuana clubs at a meeting in Anchorage, the Alaska Dispatch News reported. Board Director Cynthia Franklin said at the meeting that repealing the explicit ban doesn’t make pot clubs legal. Assistant Attorney General Harriet Milks said at the meeting that the marijuana board doesn’t have the power to expressly ban or sanction clubs, the Alaska Dispatch News reported.

Marcus Mooers said he had planned to open Monday regardless of the board’s vote on Friday, but he was happy to see the board vote against the social club restriction.

Mooers spoke to Fairbanks North Star Borough assembly members and Fairbanks Police Randall Aragon about his business at a marijuana meeting this summer. He said most of the assembly was supportive of the idea. He said the police chief agreed with his analysis of the state marijuana law.

“Those guys may not be aware that we were opening today. However, they knew it was coming,” Mooers said.

The police chief wasn’t available for comment Monday because he was in interviews all afternoon, City of Fairbanks spokeswoman Amber Courtney said.

She said that neither she nor city Mayor John Eberhart had heard about the new pot business. A quick records check showed that Mooers has a city business license under “arts, entertainment and recreation” but not a city building inspection, she said.

“I’ve done some outreach to the city attorney and some other people who would be making decisions in this matter to bring it to their attention,” Courtney said. “To my knowledge, nobody from the city has specifically told him that it was OK to open a pot smoking business.”

Originally from Asheville, North Carolina, Marcus Mooers credits his interest and experience with marijuana to his youth as a “Deadhead,” following the concerts of rock band The Grateful Dead. Mooers, 43, came to Fairbanks in 2003 to study physics at the University of Alaska Fairbanks. He’s worked in numerous fields including helping with the Phoenix spacecraft that landed on Mars in 2008. He said he’s been a pizza cook, a bagel slinger and the owner of film business Frostbite Films.

Mooers picked the name “The Higher Calling” in part for its punny name. The club’s acronym spells THC, the active ingredient in marijuana. He has ambitions to grow the business to include hosting concerts and cannabis-related classes. The building has kitchen space, and he wants to eventually sell non-marijuana food cooked on site.

The new business is across First Avenue from the Fairbanks Native Association’s Head Start building. Mooers said he hopes to avoid conflict with the daycare facility by not opening until the afternoon and by keeping the entrance discreet. The borough’s buffer zones between schools and marijuana businesses doesn’t apply to The Higher Calling because he doesn’t sell marijuana, he said.

“We’re not going to put signage up that’s going to attract children or anything like that. We’re basically going to do little in the way of signage,” he said.

The business’ only outdoor sign now is a piece of paper with the business name and logo taped to the glass front door.