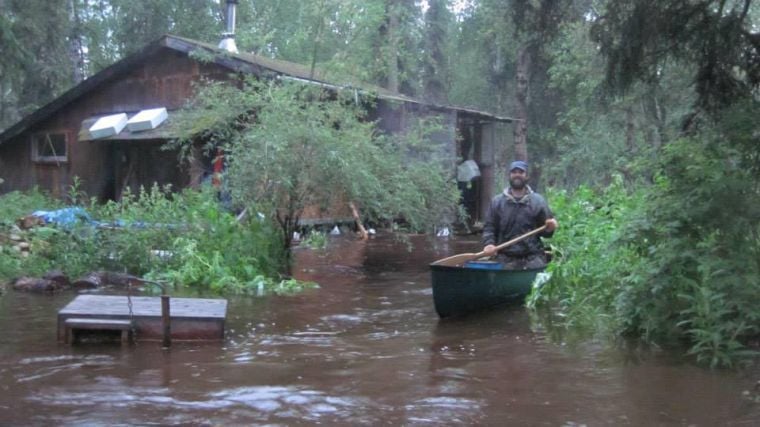 David Jonas paddles a canoe in Goldstream Valley after bringing a skiff up from the Tanana River, where he had traveled to secure his cabin Wednesday night. Photo courtesy Amy Marsh. 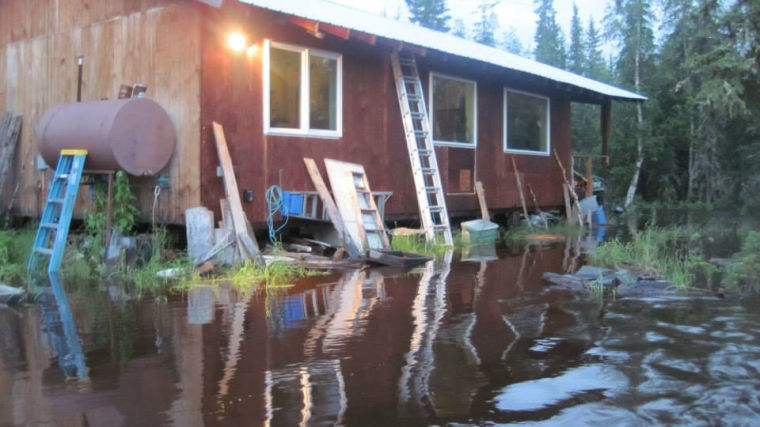 The waterline continued to creep up at Amy Marsh's cabin until about 3 a.m. This photo was taken just after midnight. Amy Marsh photo. 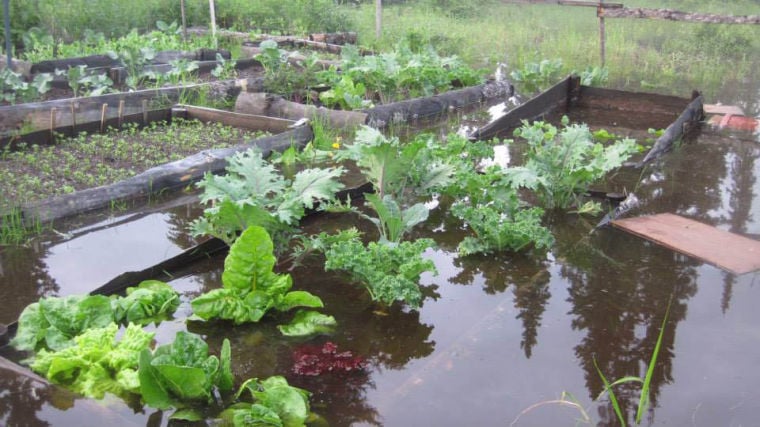 Floodwaters inundate the garden at Amy Marsh's Goldstream cabin. She writes, "You know, the garden is jinxed this year. Here's hoping the river crests soon and doesn't take the whole damn thing away." Amy Marsh photo

David Jonas paddles a canoe in Goldstream Valley after bringing a skiff up from the Tanana River, where he had traveled to secure his cabin Wednesday night. Photo courtesy Amy Marsh.

The waterline continued to creep up at Amy Marsh's cabin until about 3 a.m. This photo was taken just after midnight. Amy Marsh photo.

Floodwaters inundate the garden at Amy Marsh's Goldstream cabin. She writes, "You know, the garden is jinxed this year. Here's hoping the river crests soon and doesn't take the whole damn thing away." Amy Marsh photo

FAIRBANKS - The rain finally stopped falling but rivers were still rising around the Tanana Valley on Thursday and some residents were dealing with the aftermath of the heaviest rain seen in Fairbanks since the historic flood of 1967.

Andrea and Chris Swingley, who live in a cabin on the bank of Goldstream Creek at the bottom of Miller Hill Road in the Goldstream Valley, could hear the creek running under their house.

"The house is built up on big pilons and it's flowing under the house," Andrea Swingley said. "It sounds like it's raining outside and that's the water rushing by. It's still flowing pretty good in places."

Most of their property was under water after Goldstream Creek flooded late Thursday night, she said.

The creek, which is usually just a "decent trickle," rose about six feet in the matter of 24 hours, she said. The rising water lifted a 20-foot homemade bridge they use to cross the creek and floated it down the creek, a scene that Chris captured in a YouTube video.

"(Wednesday) morning the creek was 5 1/2 feet below our bridge and now the bridge is gone," Andrea Swingley said.

Compounding matters was the fact that the rain came on top of two other major rainfalls that dumped more than 3 inches of rain in Fairbanks in the previous two weeks, saturating the ground and causing flooding on the Chena, Salcha and Goodpaster rivers.

The Swingleys' neighbor, Amy Marsh, who lives just down the creek, was wearing chest waders Thursday to stay dry after her yard was inundated with water.

"I pretty much have water on all sides," she said. "The creek sort of burst its seams in multiple places.

"The creek is running through my front yard and I've got a creek running between the creek and my garden," Marsh said.

Marsh's house, which like the Swingleys is built on pilings, was still dry but the water in her yard was anywhere from knee to waist deep.

"I had to move both chest freezers onto the porch," Marsh said.

Water started coming over the creek banks late Wednesday afternoon, she said. In the 10 years she's lived there, Marsh said she had never seen the water as high was it was Wednesday night.

"I have pretty high banks by my house, about 10 feet, and have never been particularly worried," she said. "I was a little worried (Wednesday night) because I didn't know when it was going to crest."

Even when the water began to rise, Marsh didn't think it would flood. She spent the day hauling buckets of water from the creek to fill barrels she uses to water her garden.

"Now all my barrels are floating in the yard," she said.

A handful of residents living along the Little Chena River near 12 Mile Chena Hot Springs Road were also dealing with flooded yards and homes after that river overflowed its banks starting Wednesday night.

Patricia Baer evacuated her house on the bank of the Little Chena at about 9 a.m., loading up her nine dogs in a friend's truck who lives seven miles up the road. Her house, which is built up on pilings, was surrounded by knee-deep water.

The water rose so fast "you could watch it," she said.

It was the highest water seen on the Little Chena River since the flood in 1967, Plumb, at the weather service, said.

Water was beginning to drop in some places Thursday. The upper Chena River in the Chena River State Recreation Area had crested but there was still nuisance flooding in many areas such as access roads and parking lots. There was no longer water flowing over Chena Hot Springs Road at 36.9 Mile, Plumb said.

Likewise, the Chatanika River north of Fairbanks had crested at the Elliott Highway, he said.

The lower Chena River in Fairbanks, however, was still rising, as was the Tanana River at Fairbanks and in Nenana. Those rivers were expected to crest sometime last night or today.

Engineers lowered the flood gates at Moose Creek Dam to restrict flow into the lower Chena River at 3 p.m. on Wednesday and the gates were still in the water on Thursday, said Chena Flood Control Project manager Tim Feavel with the U.S. Army Corps of Engineers.

The river was expected to crest at the dam sometime Thursday night but the flood gates will likely remain lowered for another day or two to prevent flooding downstream. Engineers were holding more water back than usual because of the high flows in the Little Chena River, which is located below the dam.

Baer's neighbors on the Little Chena, Dave and Mary Blurton, who are on slightly higher ground than Baer, were waiting out the high water. The river had yet to flood at their house.

"It's right on the edge," Mary Blurton said. "We're ready to evacuate if it starts to spill over."

• A total of 1.92 inches of rain fell on Tuesday at Fairbanks International Airport and 1.44 inches was recorded on Wednesday for a two-day total of 3.36 inches of rain.

• The 1.92 inches of rain that fell at the Fairbanks International Airport on July 1 was the second-highest calendar day rainfall amount ever for the month of July.