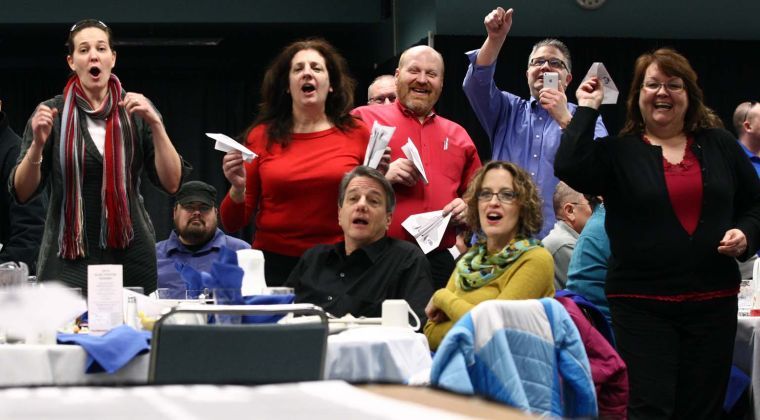 Attendees react to paper F-35 airplanes being thrown towards a tabletop runway during a 50/50 raffle game at the featured presentation "Alaska F-35's: Strategic Reach on American Soil" of the Greater Fairbanks Chamber of Commerce general membership luncheon Tuesday afternoon, February 25, 2014 at the Carlson Center. 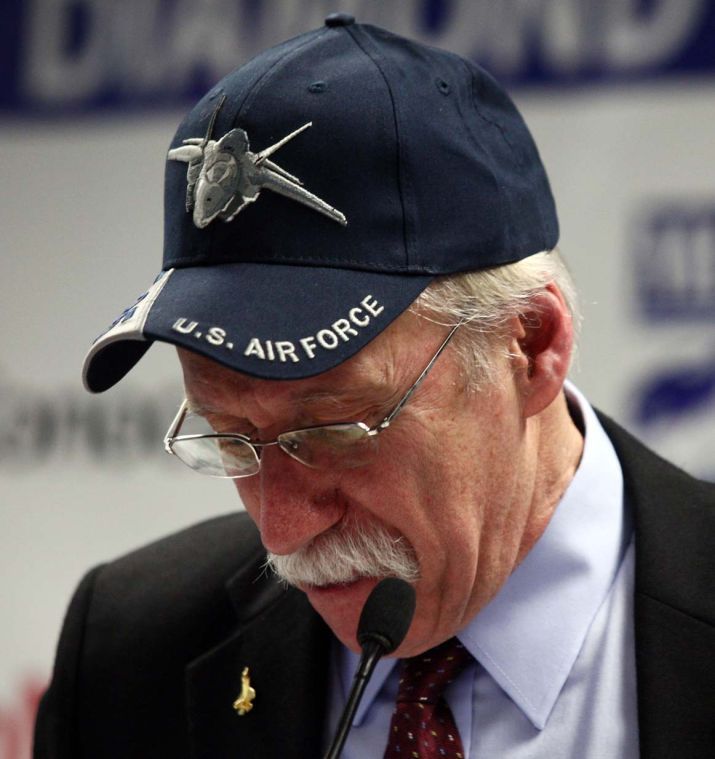 Attendees react to paper F-35 airplanes being thrown towards a tabletop runway during a 50/50 raffle game at the featured presentation "Alaska F-35's: Strategic Reach on American Soil" of the Greater Fairbanks Chamber of Commerce general membership luncheon Tuesday afternoon, February 25, 2014 at the Carlson Center.

FAIRBANKS—Eielson Air Force Base is on the short list for housing the new F-35 Joint Strike Fighter, as is Joint Base Elmendorf-Richardson in Anchorage.

The Air Force announced Tuesday it plans to put two squadrons of F-35s, 48 planes in all, at one base. Both Alaska air bases are on a short list of five favorites among what had been eight possible bases in the Asia-Pacific region, according to Alaska's congressional delegation. The Air Force will announce a shorter list of two or three options in April or May following site visits that start next week.

While it's confirmed that Eielson and Joint Base Elmendorf-Richardson are among the top five choices, the other three options are confidential because they are bases that are not on U.S. soil, said Matthew Felling, a spokesman for U.S. Sen. Lisa Murkowski. That means domestic bases Andersen Air Force Base in Guam and Joint Base Pearl Harbor-Hickam in Hawaii did not make the cut.

The new Pacific base for the F-35 will be the second active-duty placement for the new aircraft. The U.S. military plans to buy more than 2,000 of the planes.

In Interior Alaska, the placement of the F-35s has been the subject of vigorous lobbying since it was announced that the next squadrons of the nation's newest fighter plane will be among the Pacific air bases.

Local leaders say the placement of a new aircraft brings the promise of a more secure future for Eielson, which has twice been the subject of potential closure or downsizing in the last decade. An F-35 placement at Eielson would expand the size of the active-duty force even if the current training squadron of F-16 aircraft moved away to make room.

Stationing 48 F-35s in Eielson would directly create 3,042 Department of Defense jobs at Eielson, more than doubling the current work force of 2,950, according to Jim Dodson, director of the Fairbanks Economic Development Corp.

The same FEDC study that calculated these job numbers also estimated 48 new F-35s would bring an additional $379 million in payroll to the Fairbanks area, beyond the current payroll of $367 million. These numbers are based on the assumption that the Air Force wouldn't take away Eielson's 21 F-16 aircraft if Eielson was picked as an F-35 base.

Local interest in the F-35s intensified in August when Gen. Herbert "Hawk" Carlise, the commander of the U.S. Pacific Air Forces, said in an interview with Pentagon reporters that Eielson was likely to be among the top candidates because of its extensive training space. The selection of the Joint Base Elmendorf-Richardson on the short list was not predicted by Carlisle in that interview, in which he stated JBER was not likely because it's already home to a "fifth generation" aircraft, the F-22.

The Air Force recently backed down on a plan to expand Joint Base Elmendorf-Richardson's force by moving Eielson's F-16s to Anchorage.

In the past, Fairbanks business and government leaders have organized to stop cutbacks at Eielson, including the recent but now-abandoned effort to move to Anchorage Eielson's last remaining active planes, the 18th Aggressor F-16 squadron.

The Fairbanks North Star Borough government is now campaigning to bring the F-35s and hopes to get 10,000 people to register their support for bringing F-35s to Eielson on the borough website www.AlaskaF35s.com.

"We can't let our effort slack off a bit," borough Mayor Luke Hopkins said Tuesday. "We have to stay involved. As you can see, we can start with window stickers and bumper stickers on our cars."

Presenters at the Greater Fairbanks Chamber of Commerce luncheon wore lapel pins with the twin-tailed silhouette of the F-35. Posters and stickers were distributed to chamber members. The luncheon's 50/50 fundraiser raffle was transformed into a contest where chamber members made paper F-35 airplanes that they tried to land on a table decorated like an Eielson Air Force Base runway.

Dodson, with the Fairbanks Economic Development Corp., said if Eielson gets picked for the F-35 mission, the region will see a boom unlike any that's been seen since the construction of the trans-Alaska oil pipeline.

"It really doesn't matter if you're the owner of a business or a pastor of a church or the head of a nonprofit. It's going to be a positive impact if we are able to bring these aircraft to Eielson Air Force Base," he said.

All three members of Alaska's congressional delegation released statements praising the Air Force's decision to put two Alaska bases among the top five choices for the F-35 mission. The three took different approaches to the cross-state rivalry caused by two Alaska communities competing for the F-35s.

Alaska's senators said there would be something to be gained by putting the F-35s at Joint Base Elmendorf-Richardson but identified Eielson as their preferred choice.

"JBER also has enormous potential for growth but faces challenges for the F-35s that Eielson does not, including a tight housing market, noise constraints due to development around the base, and slightly congested air space," Sen. Mark Begich said in a news release.

Murkowski, in her statement, noted the effort put forward by Fairbanks.

"In the Interior, the Eielson and Fairbanks community are ready to go full throttle for the F-35s with their location and range space, while JBER and Anchorage present clear positives as well from a military perspective. Though issues about the Anchorage area were raised when the Pentagon considered placing F-16s at JBER, I am certain those will be objectively evaluated during this next site visit phase in March."

"Congressman Young believes that Eielson’s strategic location, its access to premier training range space, and its proximity to combat coded F-22 stealth fighters, make it an ideal location for the F-35," his news release states.