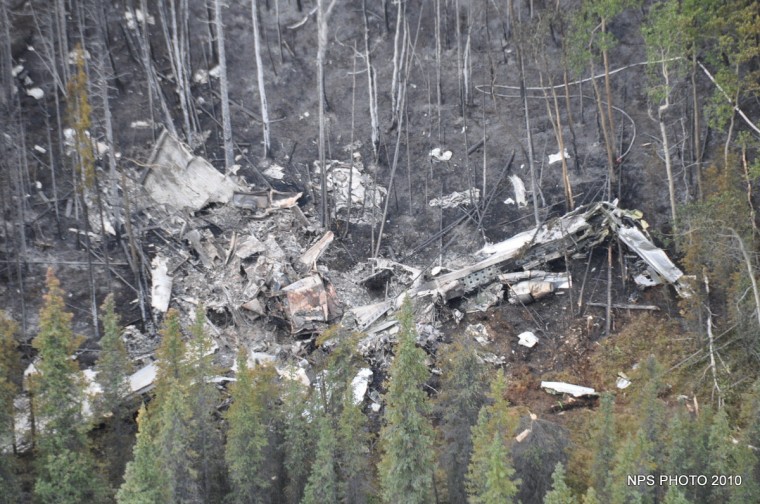 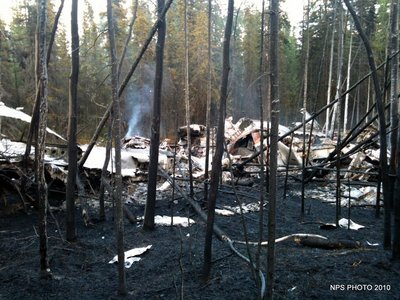 FAIRBANKS — A large four-engine cargo plane crashed at Denali National Park on Sunday afternoon, bursting into a deadly fireball that sparked a wildfire.

About 3:15 p.m. Sunday, the aircraft hit the south-facing slope of Mount Healy within 1 mile of park headquarters and 200 yards north of the Denali Park Road. It is approximately 1 mile from the Parks Highway and 1.5 miles from McKinley National Park Airport.

Early Monday morning, the FAA confirmed the aircraft's identification as tail number N709RR, the same aircraft used in the filming of the movie "ConAir."

Three people were reported to be onboard the aircraft when it crashed, Fister wrote in a press release, and it is unlikely that any survived.

George Clare of Las Vegas said he saw the plane flying very low and slowly while he was walking toward the park visitors center. He thought the plane was going to land at the nearby airstrip, so he proceeded to the visitor’s center. Within minutes, people came running in, saying a plane had crashed.

Emergency responders arrived within minutes, but flames prevented rescuers from reaching the wreckage. In addition to National Park Service medics and firefighters, the Tri-Valley and McKinley Village volunteer fire departments responded with fire engines and an ambulance.

Doug Stockdale, fire information officer with the Bureau of Land Management's Alaska Fire Service, said eight smokejumpers have been deployed to the fire and are working with the National Park Service to fight it. “The park service is handling the aircraft accident as a separate incident, and we’re handling (the fire) as a separate incident,” he said.

The fire was reported as 2 acres in size shortly after 4 p.m., he said, and the next perimeter update is anticipated this morning.

Smokejumpers, Park Service rangers, and the Alaska State Troopers are on the scene of the crash and were expected to work overnight to control the situation.

National Transportation Safety Board investigators are expected to arrive on-scene this morning.

Denali Park Road is open, but the Rock Creek and Roadside trails are closed.

A temporary flight restriction has been implemented. Pilots who intend to use the park airport or fly through the Windy Pass area are advised to check Notices to Airmen for complete details.

The crashed aircraft was built in 1954 by Fairchild Aircraft and carried Pratt & Whitney R-2800 engines as of its last airworthiness certification in May 2009. More information about its history can be found at this website.

This isn't the first fatal accident involving a C-123 in Alaska. On Dec. 15, 1965, five National Guardsmen died when their Air Guard C-123 crashed on a routine supply mission crashes near Romanzof Air Station, about 550 miles due west of Anchorage.

On April 26, 1964, four National Guardsmen, including Maj. Gen. Thomas Carroll, the first adjutant general of the Alaska National Guard, died when their C-123 crashed off Valdez during a flight to inspect damage from the Good Friday Earthquake.

Associated Press reporter Rachel D'Oro in Anchorage and News-Miner reporter Amanda Bohman contributed to this report. Contact the newsroom at 459-7572.