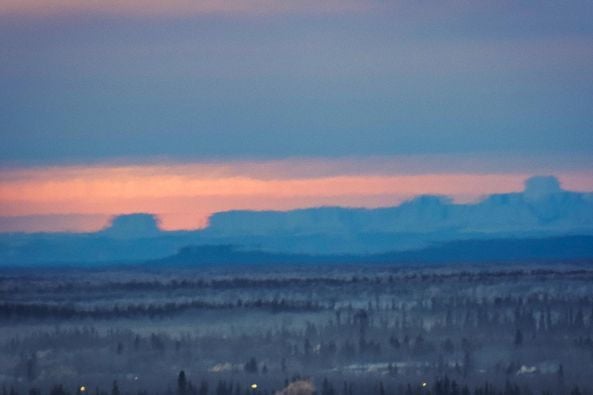 This picture looking southeast from the U.S. National Weather Service office on the University of Alaska Fairbanks campus shows Mt. Hayes (at left) made blurry and flat peaked by a Fata Morgana caused by a temperature inversion. 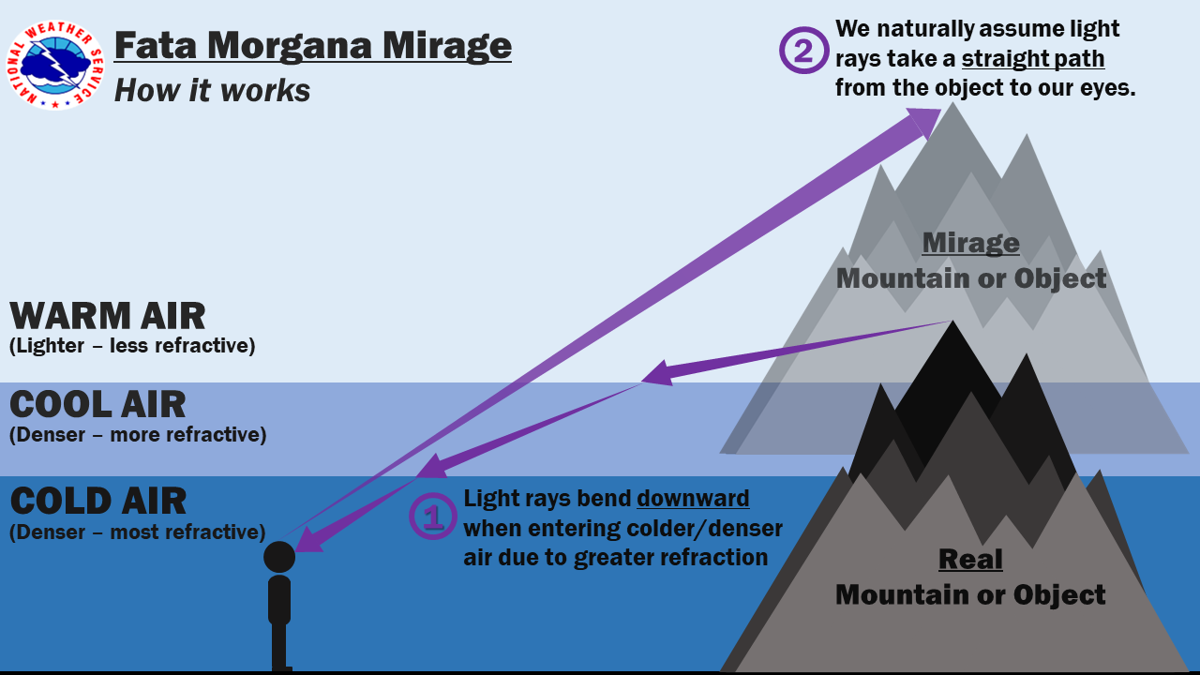 This picture looking southeast from the U.S. National Weather Service office on the University of Alaska Fairbanks campus shows Mt. Hayes (at left) made blurry and flat peaked by a Fata Morgana caused by a temperature inversion.

Parts of Fairbanks saw a 40-degree temperature inversion compared with higher elevation areas of the Tanana Valley on Thursday.

In the morning, temperatures at Cleary Summit were as high as 26 degrees above zero while Fairbanks International Airport, North Pole and parts of the Goldstream Valley saw temperatures as low as 13 to 15 degrees below zero.

According to the National Weather Service office in Fairbanks, while the temperature at the airport, at an elevation of 433 feet, was 13 below it was a full 30 degrees warmer less than 10 miles away and almost 500 feet higher at the top of Chena Ridge.

Inversions do more than create extreme temperature variations; they also make for substantial differences in air quality depending on elevation. That's because stagnant air gets trapped and localized at low-lying elevations, leading to high concentrations of pollutants. When the Fairbanks area sees temperature inversions like those of Thursday, there tends to be a corresponding impact on air quality.

The air quality index is a measurement of fine particulates in the air, and it makes for unhealthy air when those particulates get trapped by a temperature inversion.

"Our temperature inversions are why we have the air quality we do in the wintertime," said Rick Thoman, a climate specialist with the Alaska Center for Climate Assessment and Policy.

Thoman called the temperature inversion on Thursday "a pretty healthy one" but by no means uncommon for the area.

"The fastest way to improve the air quality is when wind breaks through right down at the valley floor, that would allow the air to mix through and the inversion wouldn’t be so strong," he said.

But, as Fairbanks area residents know well, that kind of wind at lower elevations is rare in the winter, meaning the community will have to wait for heavy cloud cover to help break the inversion.

Air quality Thursday was moderate in Fairbanks and unhealthy for sensitive groups in North Pole, which means people with respiratory or heart disease, older people and children should limit prolonged exertion.