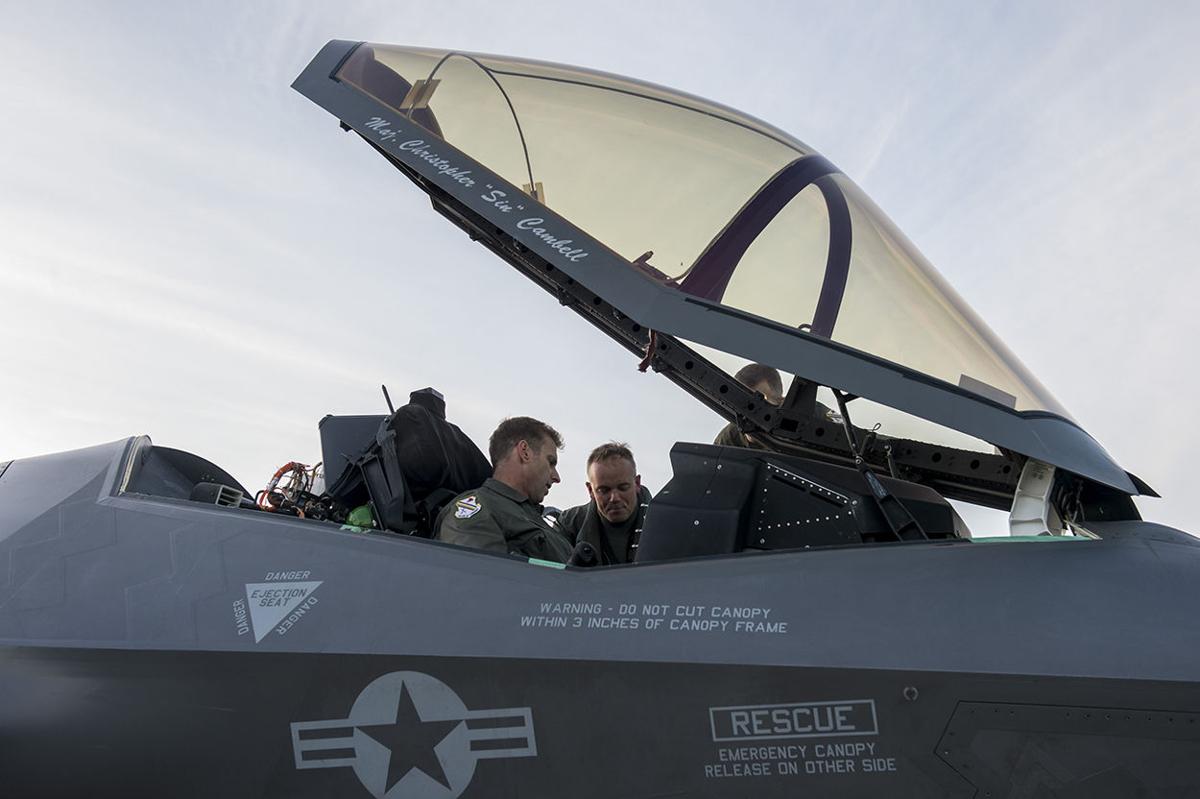 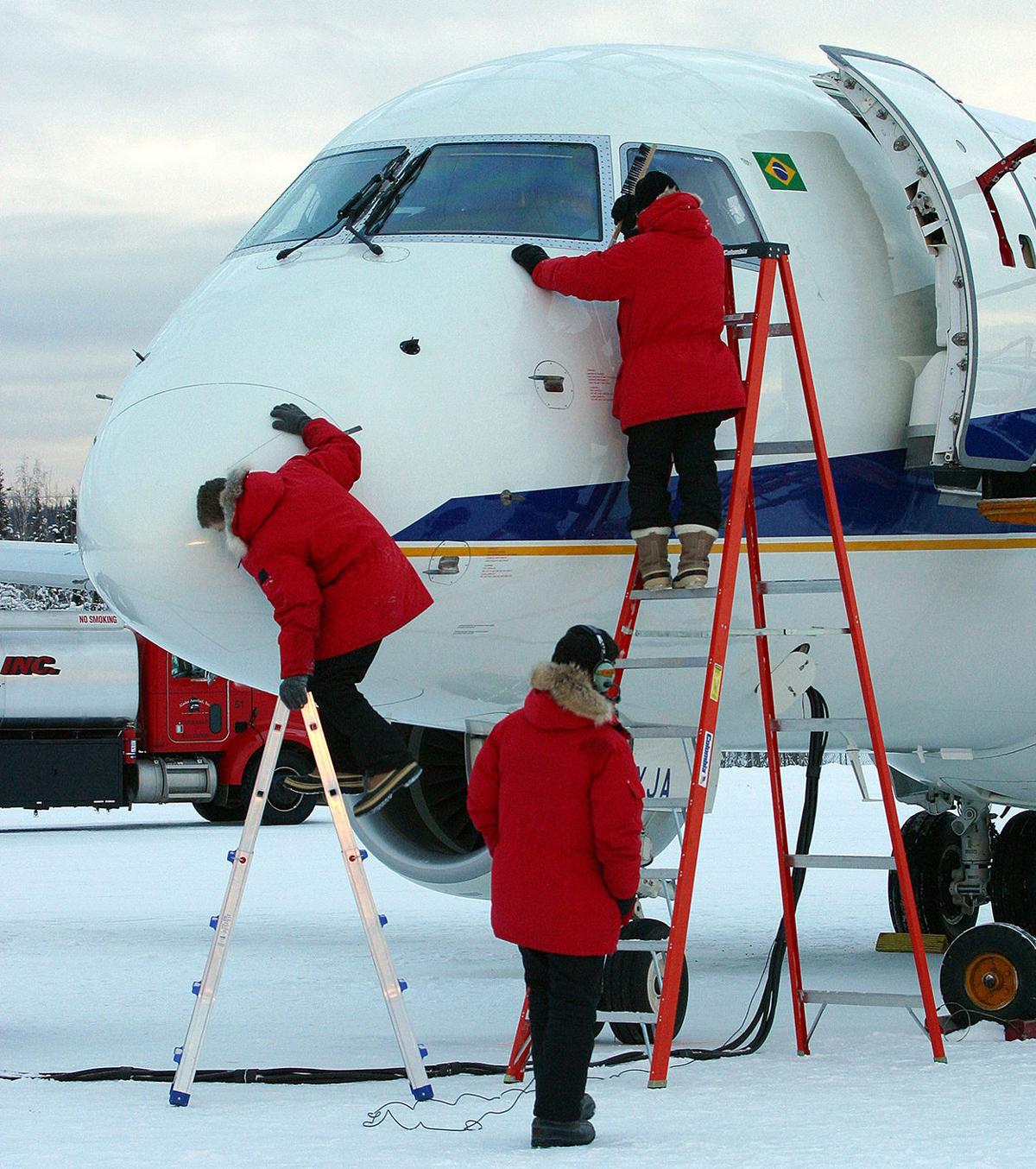 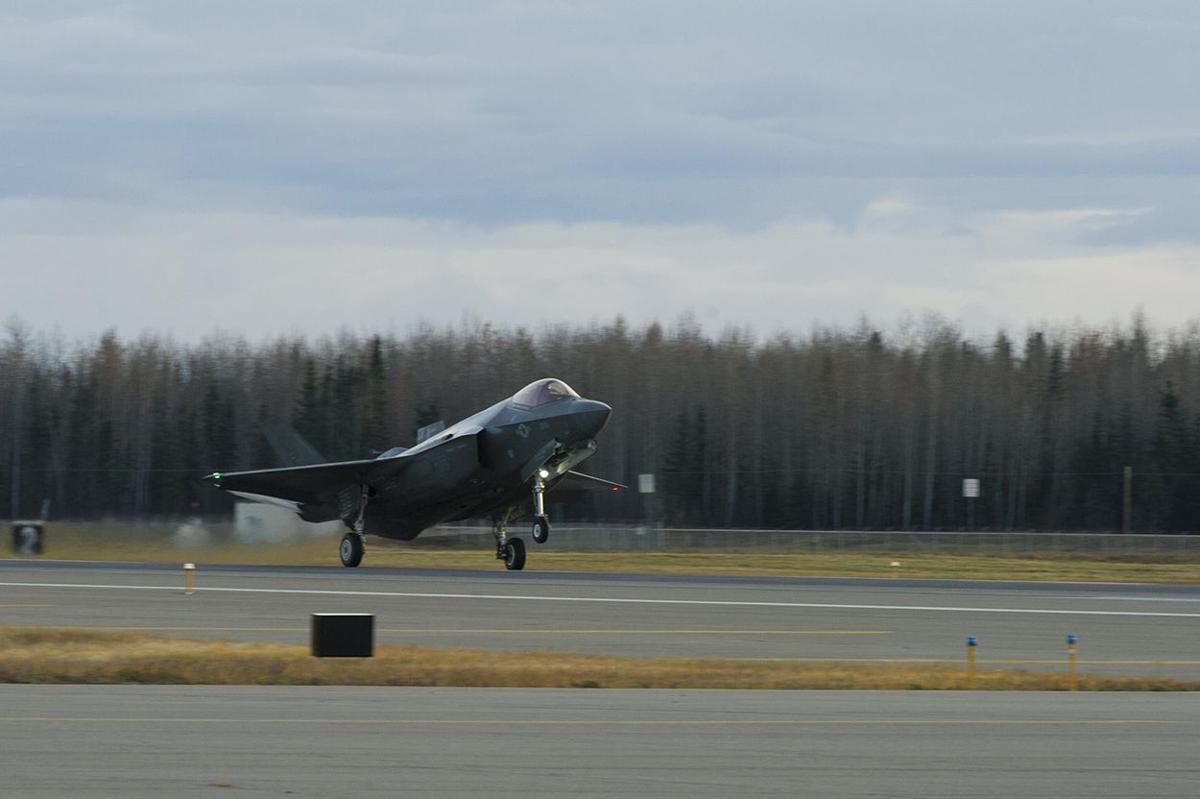 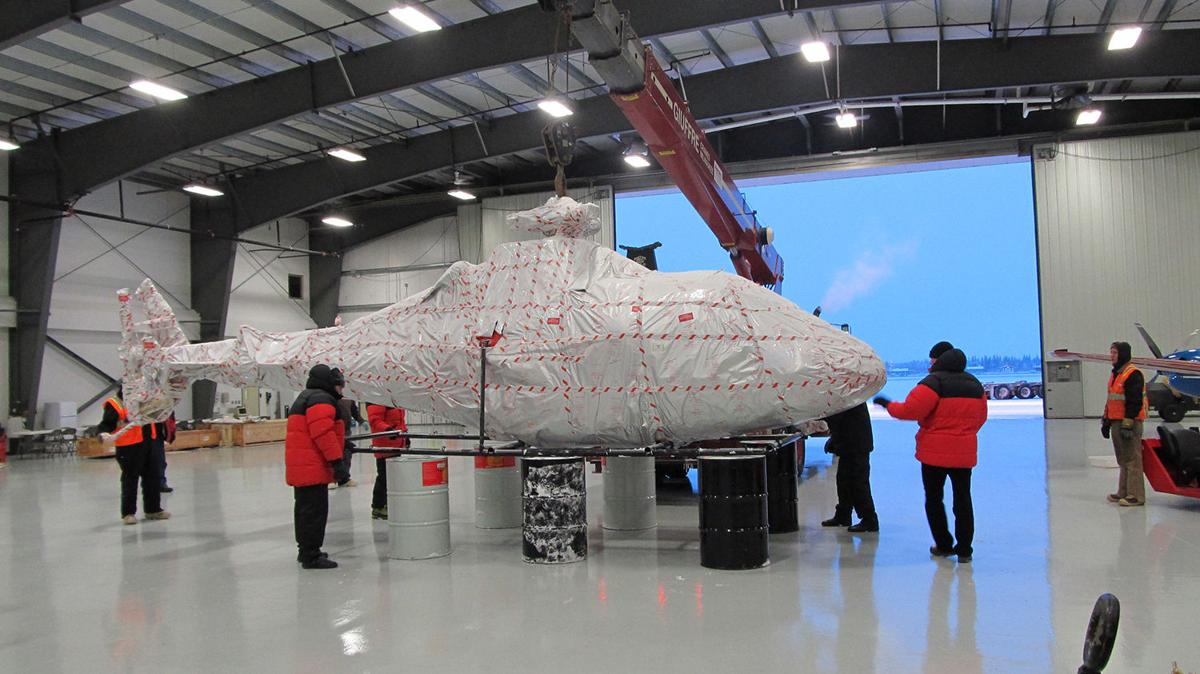 A helicopter that was brought to Fairbanks for cold weather testing is unwrapped at Fairbanks International Airport. Photo courtesy of Alaska Aerofuel 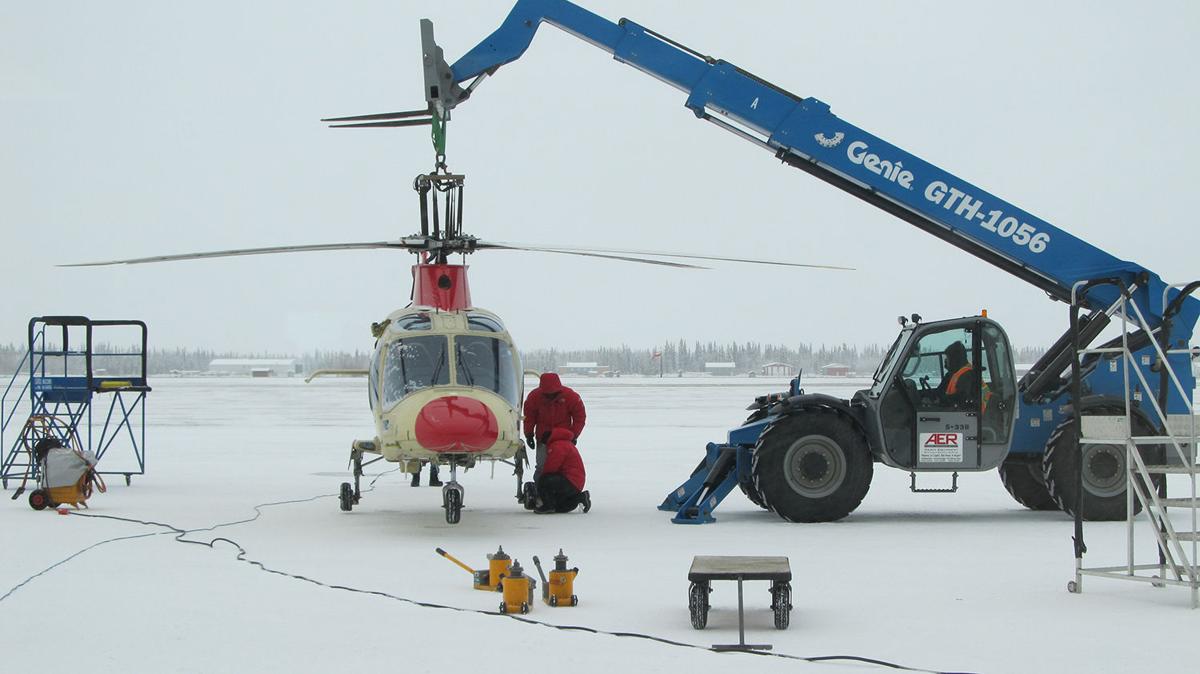 A helicopter that was brought to Fairbanks for cold weather testing is unwrapped at Fairbanks International Airport. Photo courtesy of Alaska Aerofuel

Alaska has been in the news the past few years because what used to be a winter anomaly — record warmth — has become the norm. In the not-so-distant past, though, it wasn’t unusual to see state-of-the-art jets at the airport or convoys of new identical vehicles driving through the ice fog as manufacturers sent them north for cold weather testing.

Ice fog has been rare these past few winters, but Alaska is still a draw for cold-weather testing.

Most airlines are looking for specific conditions, such as 40-below temperatures for certification. Testing facilities are available in Fairbanks, Canada and Russia.

“They kind of watch the weather and go to where the weather is,” Hill said. “With aviation, it’s a little bit easier (than automotive testing). They find the window and it’s a five- or six-hour flight to get there. If they have a testing window on Jan. 15 and they want to see X degrees, who’s got it?”

Some of the automotive groups can bring as many as 70-80 people, Hill said. Alaska Aerofuel works with the companies to help coordinate logistics for the testing, as well as hotels, restaurants, rental vehicles and catering.

Fairbanks is a good location for testing, too, beyond its frigid reputation.

“What the aviation market loves is we don’t have a lot of traffic,” Hill said. “The airplanes can shoot the patterns quite a bit. Helicopters can go to the practice area just south of the airfield. They like that airlines service us, so they can get people in and out. And FedEx is right next door if they need to send parts up.

“We get to see some pretty cool planes.”

In October 2017, the Air Force tested its F-35A Lightning II fighter aircraft at Eielson Air Force Base. There was no snow on the ground at the time, but there was when the planes were tested again the following month. Two squadrons are expected to start arriving at Eielson in spring.

And even if it’s not as cold as in the past, Fairbanks usually still has reliable below-freezing weather several months of the year, said Juliet Shepherd of Fairbanks Economic Development Corp. Her title is project manager for emerging Arctic and technology-led development.

“Even though our temperatures have been inconsistent, we still have the shoulder seasons, although not this year, clearly,” she said. “A couple of years back we had October and November where other years were still not freezing in the Lower 48.”

While FEDC in the past was a conduit for companies looking for cold-testing facilities, more of them are directly contacting facilities like the U.S. Army Cold Regions Test Center at Fort Greely, Shepherd said. Tesla, for instance, has built its own test site at the facility and was putting its cars through their paces in January of this year. Another company planned to build a cold-weather test track on the North Slope.

Shepherd said she is seeing an increase in interest that isn’t automotive-related, such as a shoe manufacturer and companies testing building materials. One company wants to test custom fuel blends and how engines perform with them.

“We’re seeing an increase in interest from the military in devising effective cold-weather gear, which we’re likely to continue to see,” she said.

Not just cars and planes

And it’s not just the materials that are undergoing testing. Lower 48 building techniques don’t always work in Fairbanks, and the Cold Climate Housing Research Center in Fairbanks has been busy working on ways to retrofit houses that were built during the pipeline boom, for instance, according to Bruno Grunau,

Back then, typical Lower 48 2x4 and 2x6 construction was the norm, with the only difference a layer of plastic in the wall next to the insulation.

“That’s fine in Kansas, but up here you can imagine how much fuel you use,” Grunau said. “When fuel was cheap, it wasn’t a big deal. What do you do when you’re cold? You put on more layers. You take the siding off the house and slap on a couple of pieces of foam.”

The problem with that is the moisture from inside the house that would typically evaporate in the spring gets sandwiched between the layers of insulation and promotes mold growth, which can cause rot and structural issues, as well as health issues, he said.

CCHRC has a trailer that can hold up to eight walls with different configurations of insulation. The center also is testing different construction methods, such as framing a cavity that can be filled with cellulose.

And with changing weather conditions, Grunau isn’t sure what’s on the horizon. According to a report published earlier this year by Fairbanks climatologists Rick Thoman and John Walsh, annual precipitation in Interior Alaska has increased 8.8% since 1969. In Western Alaska and the northeast part of the state, precipitation has increased 17%.

So far, Grunau said, he doesn’t have enough data to suggest what warmer, wetter conditions will mean in Fairbanks over the long term.

“Fairbanks is generally dry,” he said. “Houses rot generally with this issue of moisture in the walls. Houses will stay forever if they’re dry. We get a leak in the roof and it goes pretty fast. The name of the game is to keep it dry.”

While changing conditions mean opportunities for different kinds of testing, Grunau is uncertain what part CCHRC will play. With the center’s funding zeroed out this year in the state budget, Grunau said the center only has enough savings to operate through April.

But even a changing climate has economic opportunities. FEDC’s Shepherd said she expects to see more testing of specialized equipment, such as heavy equipment that can be used over a variety of surfaces.

“Although our temperatures may not be as cold as consistently as they have been previously,” she said, “what I’m seeing is there’s going to be continued testing in Alaska and in the Interior because of the changing climate.”