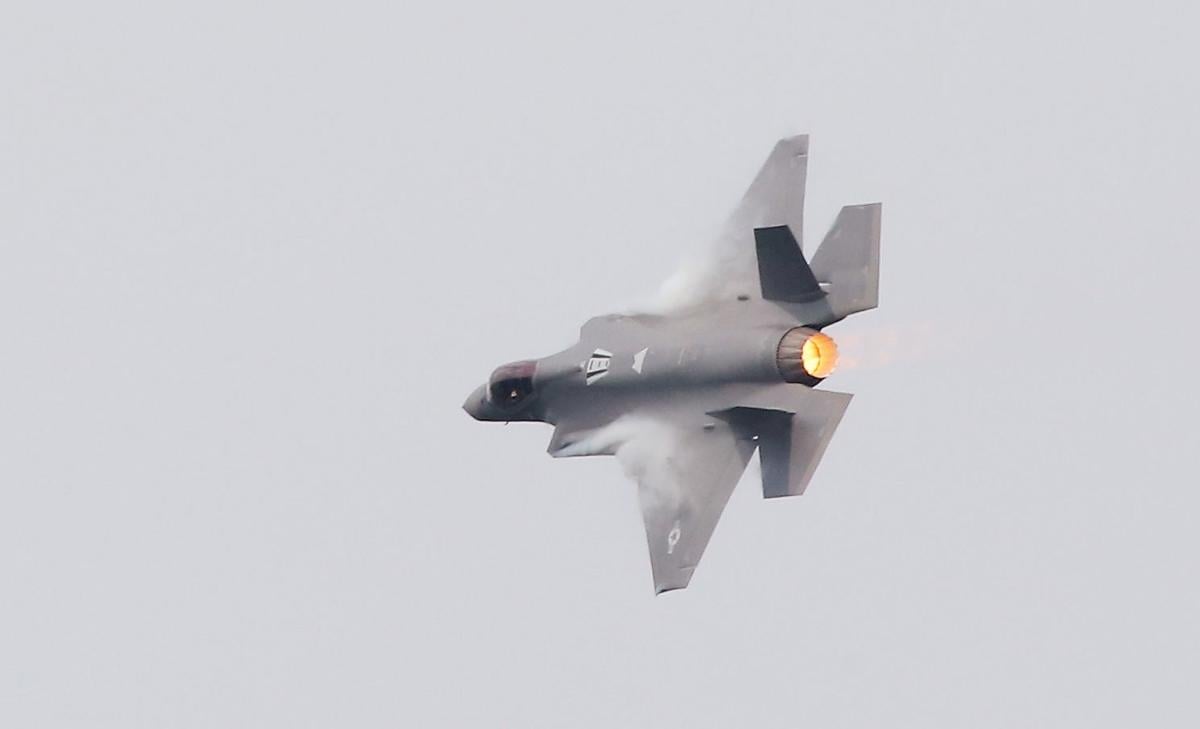 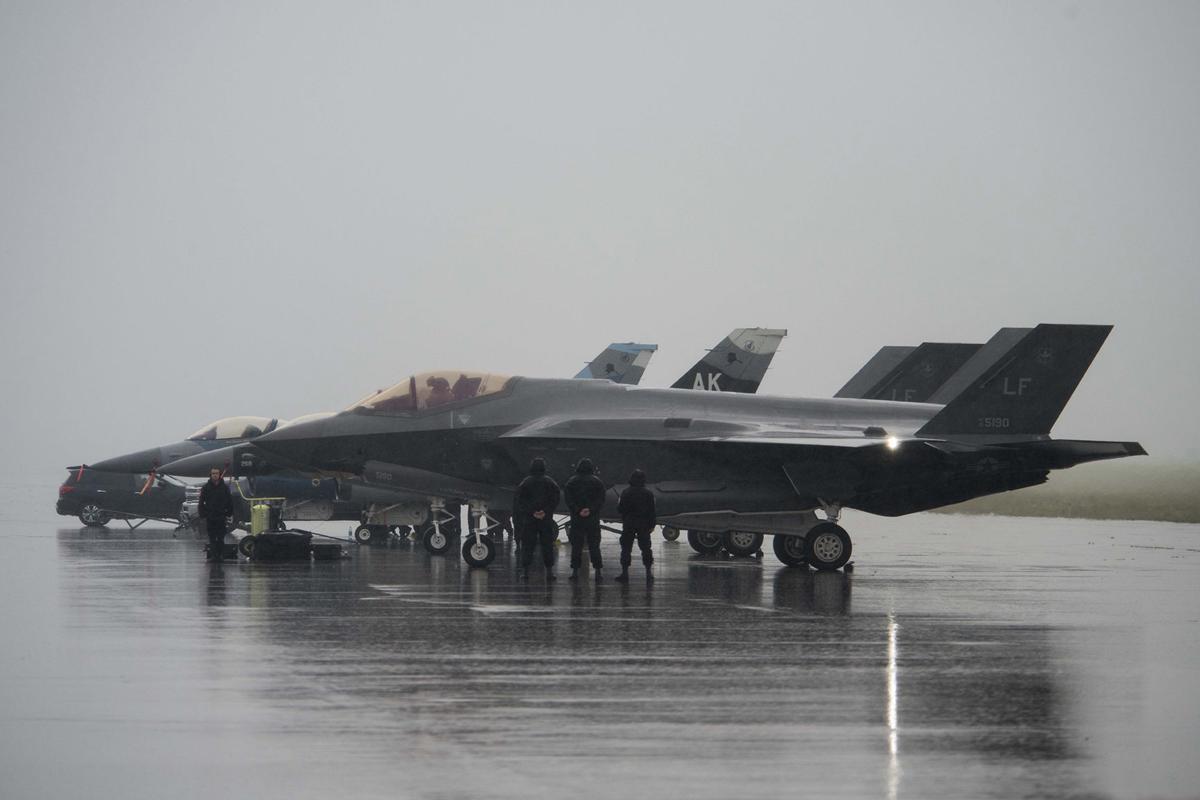 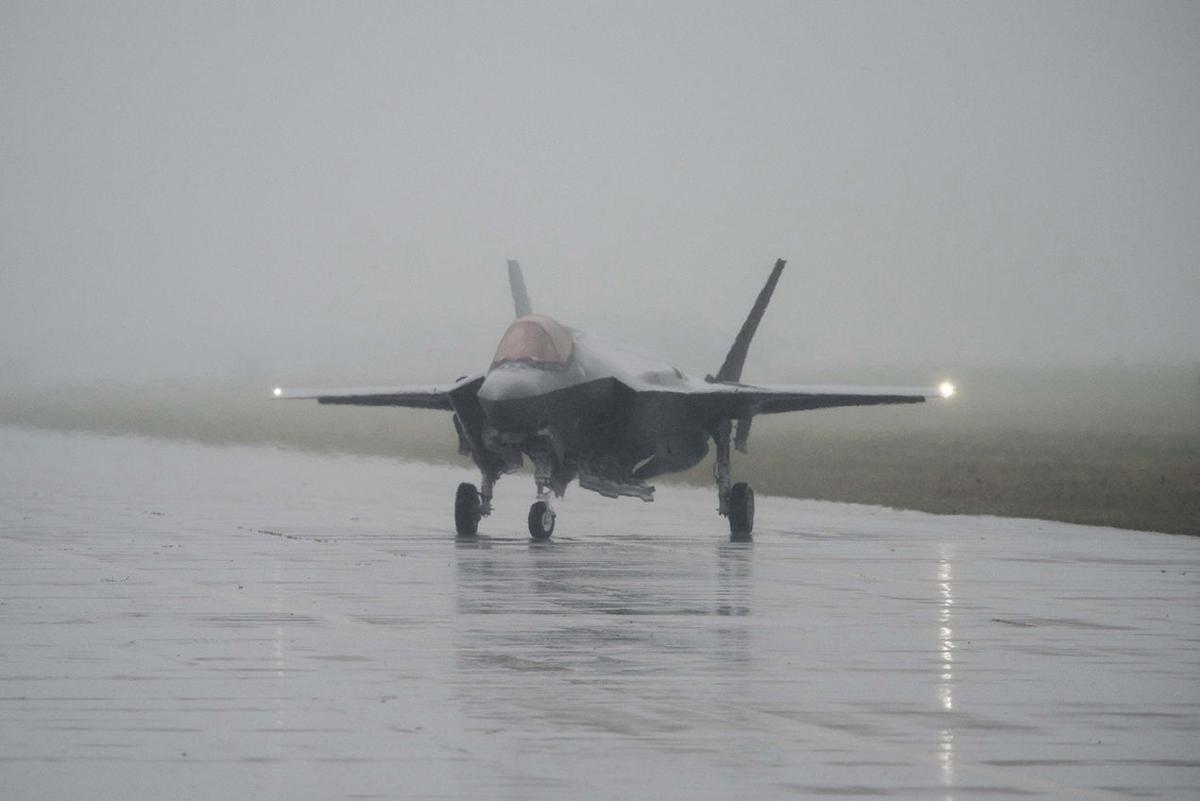 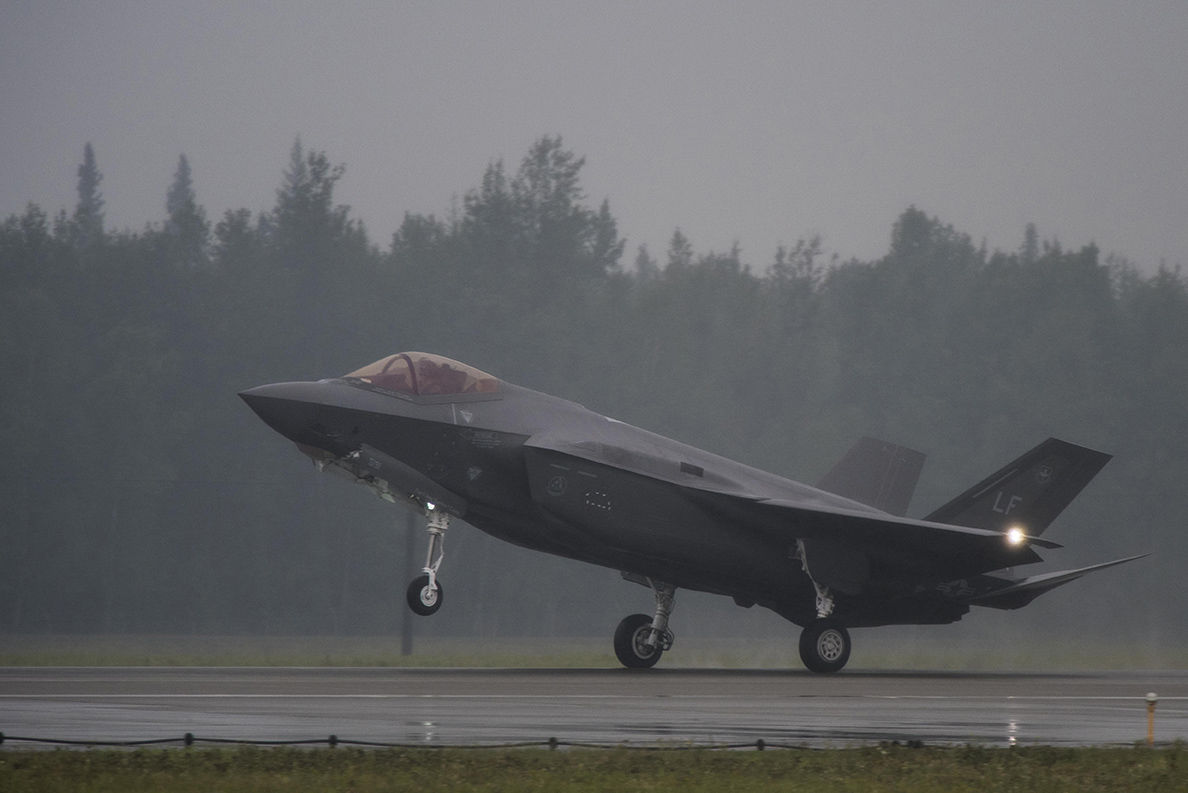 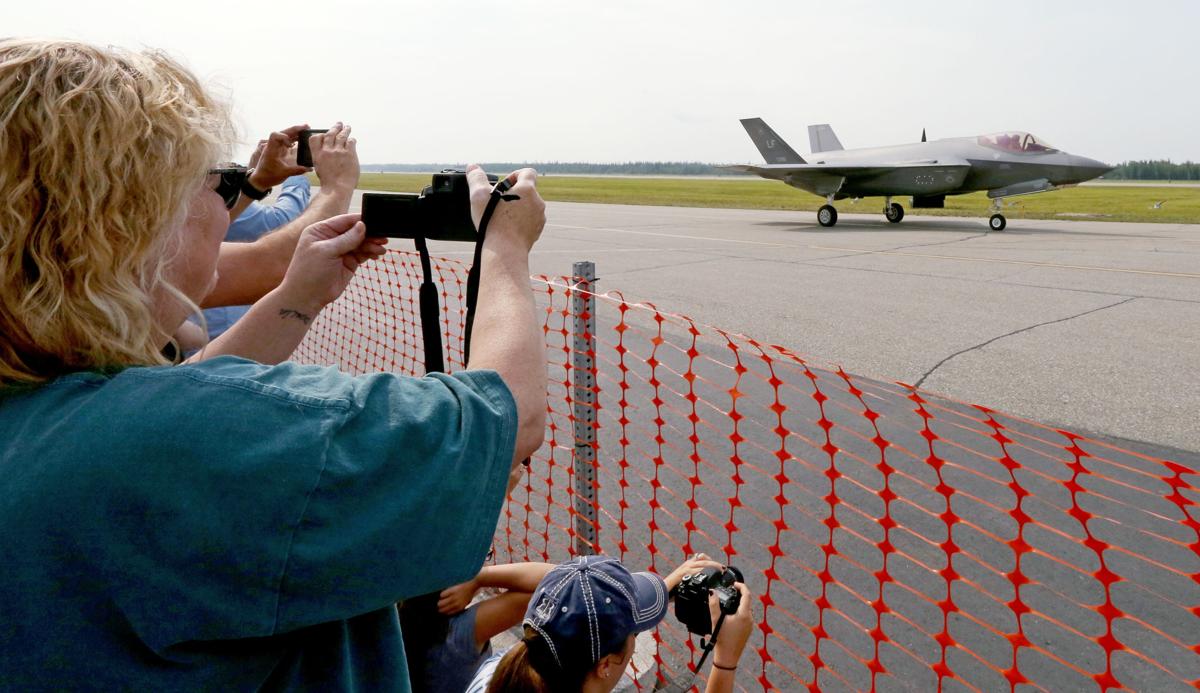 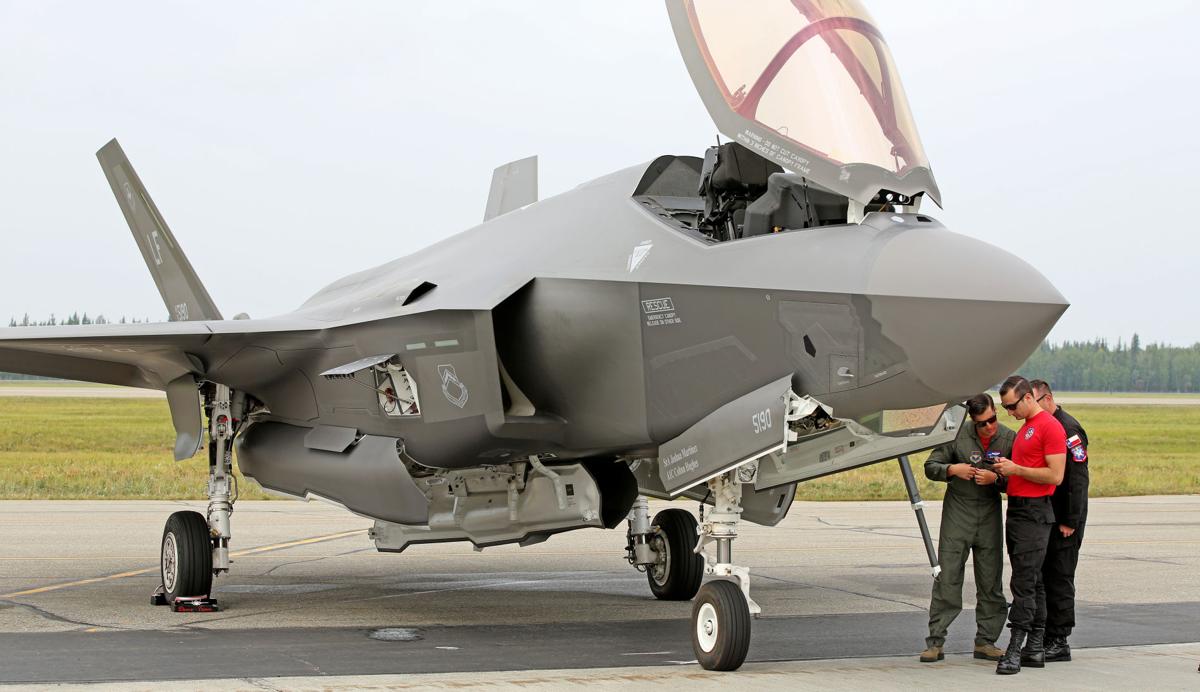 An F-35 Lightning II fighter is prepped for the show as thousands of people attend the Arctic Lightning Airshow Saturday, July 13, 2019 at Eielson Air Force Base. Eric Engman/News-Miner

An F-35 Lightning II fighter is prepped for the show as thousands of people attend the Arctic Lightning Airshow Saturday, July 13, 2019 at Eielson Air Force Base. Eric Engman/News-Miner

Tuesday's touchdown of a pair of the nation's newest fighter jets at Eielson Air Force Base marks the end of a decades-long effort to have the aircraft stationed at the installation. With a total price tag of about $400 billion, the F-35 program is the costliest weapons program in U.S. military history.

Getting the aircraft to Eielson has been a complicated and precarious process.

The F-35 program began in the 1990s with plans for a basic airframe that, with some adjustments, would fulfill fighter jet needs of the Air Force, Navy and Marines. The U.S. announced plans to purchase more than 2,400 of the aircraft over the next several decades from manufacturer Lockheed Martin.

Years before Alaska’s legislators pushed to have the North Pole-area base selected to receive the new aircraft, Eielson Air Force Base was nearly shut down. In 2005, state leaders and Fairbanks North Star Borough leaders and residents protested to keep the base open when it was considered for closure by the Pentagon. Eielson ultimately remained open following a decision by the Base Realignment and Closure Commission, though the panel did allow for the removal of the base's squadron of A-10s.

In October 2009, Alaska’s congressional delegation sent a letter to the secretary of the Air Force urging him to station F-35s at Eielson. Later that month, the Air Force announced that Eielson had fallen from being in the top 10 locations it was considering to the top 60. In 2012, a year after Lockheed Martin finished its first nine F-35s, the Pentagon considered stripping Eielson of its only active-duty aircraft — a squadron of F-16 fighters that are used to play the role of enemy aircraft during training exercises in the Interior.

But the fight wasn’t over.

Eielson didn’t lose its F-16s, and in August 2014 Eielson was back in the discussion as a possibility, with the Air Force even designating it as the "preferred alternative" location to base the first Pacific-region F-35 squadrons. By that point, 107 aircraft had been constructed and delivered to bases across the country.

Over the course of 2015, the Air Force held various meetings in Fairbanks and North Pole as it planned for the possible beddown of F-35s. At the time, Eielson was still considered the preferred alternative to house the aircraft, and local government and business leaders were aggressively lobbying the Air Force to officially select the base.

In February 2016, President Barack Obama proposed a budget for the next fiscal year that included $295.6 million for construction at Eielson Air Force Base to prepare for the arrival of the F-35 aircraft. The sum was a little over half of the $500 million estimated cost of the infrastructure required to support a new fleet.

On April 4 of that year, the decision was made. That day Air Force Secretary Deborah Lee James signed the record of decision for the environmental impact statement that had studied the basing of F-35s at Eielson.

"Alaska combines a strategically important location with a world-class training environment," James said in a news release. "Basing the F-35s at Eielson AFB will allow the Air Force the capability of using the Joint Pacific Alaska Range Complex for large force exercises using a multitude of ranges and maneuver areas in Alaska.”

News that the F-35s would be coming to Eielson was also announced at a packed Fairbanks Chamber of Commerce luncheon that day at the Fairbanks Westmark Hotel. The crowd responded with a standing ovation.

"It's really remarkable when you consider the reversal of fortune that we have seen," U.S. Sen. Lisa Murkowski said that at the Westmark, describing the local reaction when the Pentagon announced Eielson cutbacks in 2012. "They basically said give it up. Give it up because it's coming your way, the decision has been made. And so, what did we do? We didn't give it up. We didn't even get close to giving it up."

Glitches, a risk and an airshow

While the fight for Eielson was a success, the F-35 program continued to be beset by problems. In August 2016, the Air Force declared its version of the F-35 ready if needed for limited combat operations. Less than two months later, the Air Force announced that it was temporarily grounding 15 of the jets after it discovered that insulation was "peeling and crumbling" inside the fuel tanks. At the time, the Daily News-Miner reported that Lockheed Martin was still working on “flawed software” and other technical issues and the aircraft wouldn’t be fully combat ready for at least another three years.

In the meantime, then-presidential candidate Donald Trump was expressing his doubts about the program while he was campaigning, raising concerns over whether he would terminate the program if elected. As far back as October 2015 Trump criticized the jet's costs during a radio interview, saying he heard "that it's not very good. I'm hearing that our existing planes are better."

Trump’s disapproval turned out to lack bite. The program’s budget remained intact, and in April 2017 construction started on the $500 million of work to get Eielson Air Force Base ready for the new jets. 2017 also saw the first ever F-35 involvement in Northern Edge exercises, and, in October, an F-35 was test-flown at Eielson for the first time. In the summer of 2019, Eielson Air Force held its first air show in over a decade, and the public got its first glimpse of the new aircraft as it was one was brought up for a demonstration.

This story was compiled by staff writer Alistair Gardiner from Daily News-Miner archives.