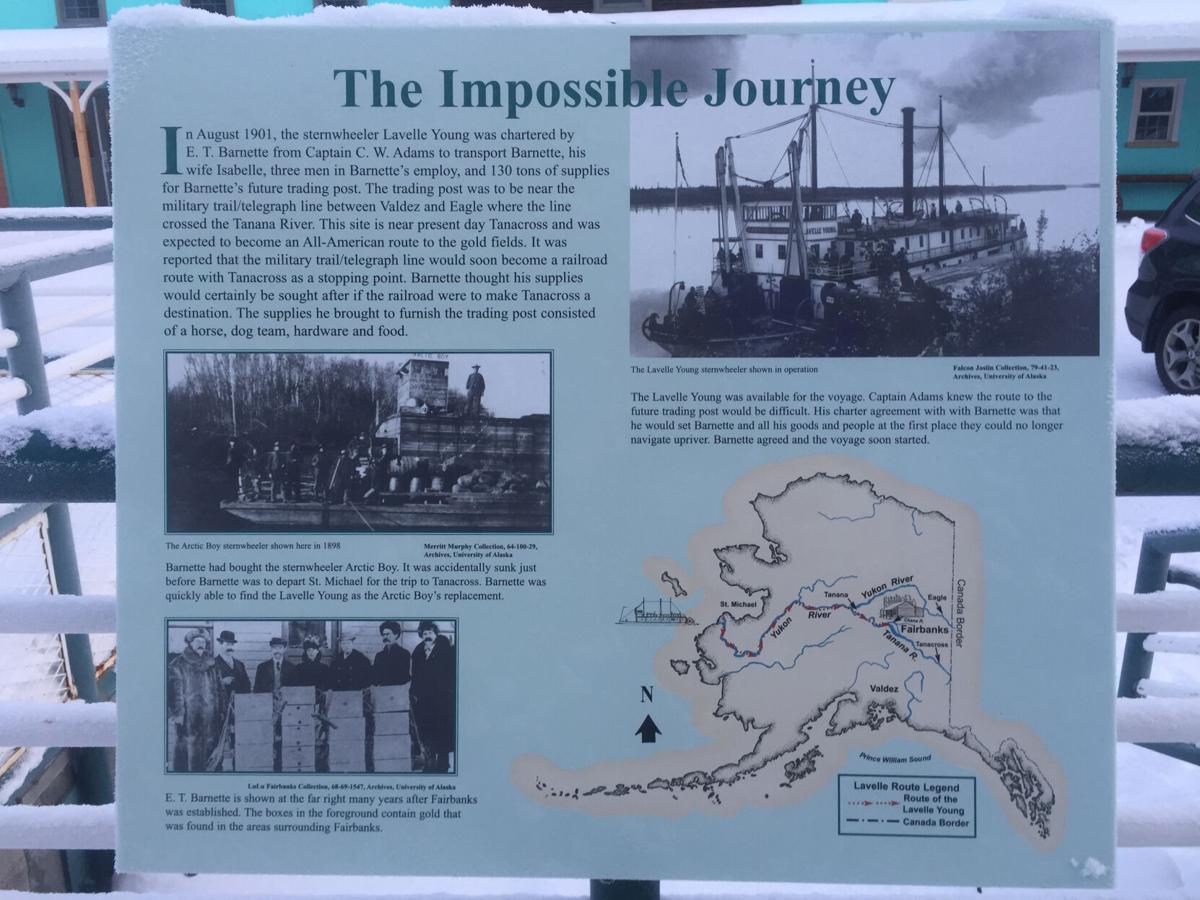 This is the interpretive display for the Lavelle Young wheelhouse at Pioneer Park. 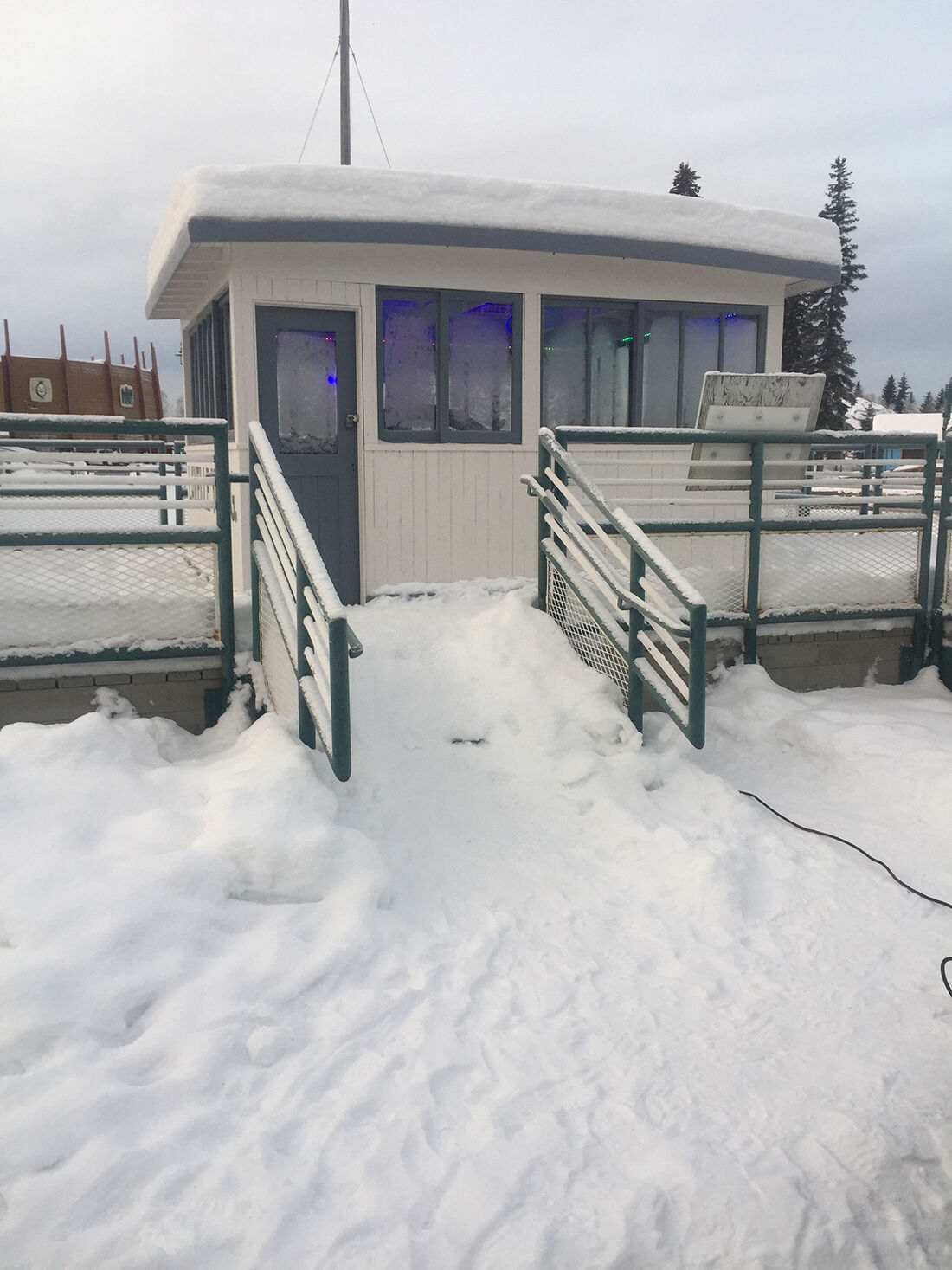 The Lavelle Young wheelhouse at Pioneer Park is locked and covered in snow this time of year.

This is the interpretive display for the Lavelle Young wheelhouse at Pioneer Park.

The Lavelle Young wheelhouse at Pioneer Park is locked and covered in snow this time of year.

A new virtual technology museum in the Lower 48 includes some historical photographs from the Fairbanks area and the curator is hoping to include even more Fairbanks history.

Specifically, he is looking for photographs of the wheelhouse of the paddle steamer Lavelle Young, currently on display at Pioneer Park.

The virtual technology museum is his all-consuming hobby at the moment.

“It’s something I started because I have a huge collection of old technology items and resources,” said Paul Cramer. “I have steam model engines, slide valve engines, photographs from all over the world shot back at the turn of the century, of different machine shops and things with machinists standing outside with all their tools in their hands.

“All kinds of stuff,” he added. “I have a large collection of photographs and over 100 small engine models.”

He hopes to donate his personal collection of models eventually to an organization that would maintain them and display them in a museum.

Meanwhile, he is in the process of creating a virtual museum.

He contacted me because he has an historical photograph of the Lavelle Young and is seeking an updated photo of the wheelhouse, currently on display at Pioneer Park. The only recent photo I could offer was of the outside exhibit covered in snow.

The historical photo of the Lavelle Young was taken at a place called Peavy Alaska, which no longer exists, he said. He spent quite a while tracking down the location and recently added a map to the digital entry.

“I enjoy going into the rabbit holes, I guess,” he said. “But it’s so time consuming.”

The photo, from a glass plate negative, depicts the paddle steamer Lavelle Young anchored at the mining outpost of Peavy, Alaska in 1899 during the days of the Alaska Gold Rush. Photographer T.J. Langston, of Johnston, S.C., captured the image.

“The heydey of the Klondike had come and gone,” the entry states. “Never the less, new finds on the Koyukuk and Seward Peninsula resulted in renewed fervor for the precious metal.”

The Lavelle Young is the ship from which E.T. Barnette disembarked in 1901 and created a trading post for gold miners. The town that sprang up became the city of Fairbanks, according to the virtual technology museum entry.

Here is the webpage: www.virtualtechmuseum.com.

Cramer hopes to connect online with the Pioneer Museum in Fairbanks eventually.

“There’s a good reason to connect these different resources with each other and maybe share links,” he said.

He hopes that this collection will inspire future engineers and historians.

“I want to do something that has some meaning,” he said. “Especially for young engineering students.”

You can reach him at request@virtualtechnologymuseum.com.

Applications are available at local high school counselor offices and on the FRTA website at akfrta.weebly.com. Applications must be postmarked by March 15, 2021 and mailed to P.O. Box 81071, Fairbanks, AK 99708.