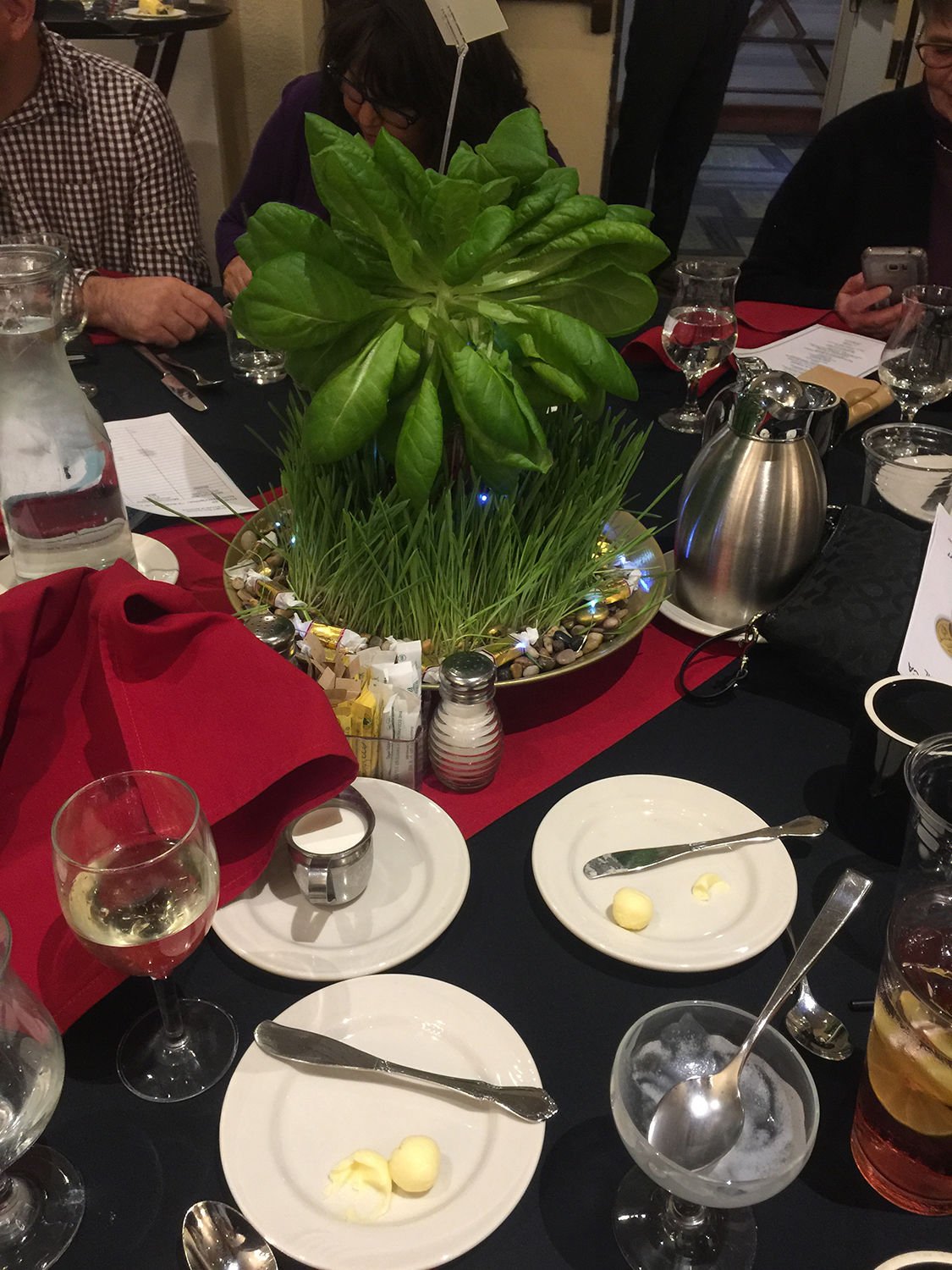 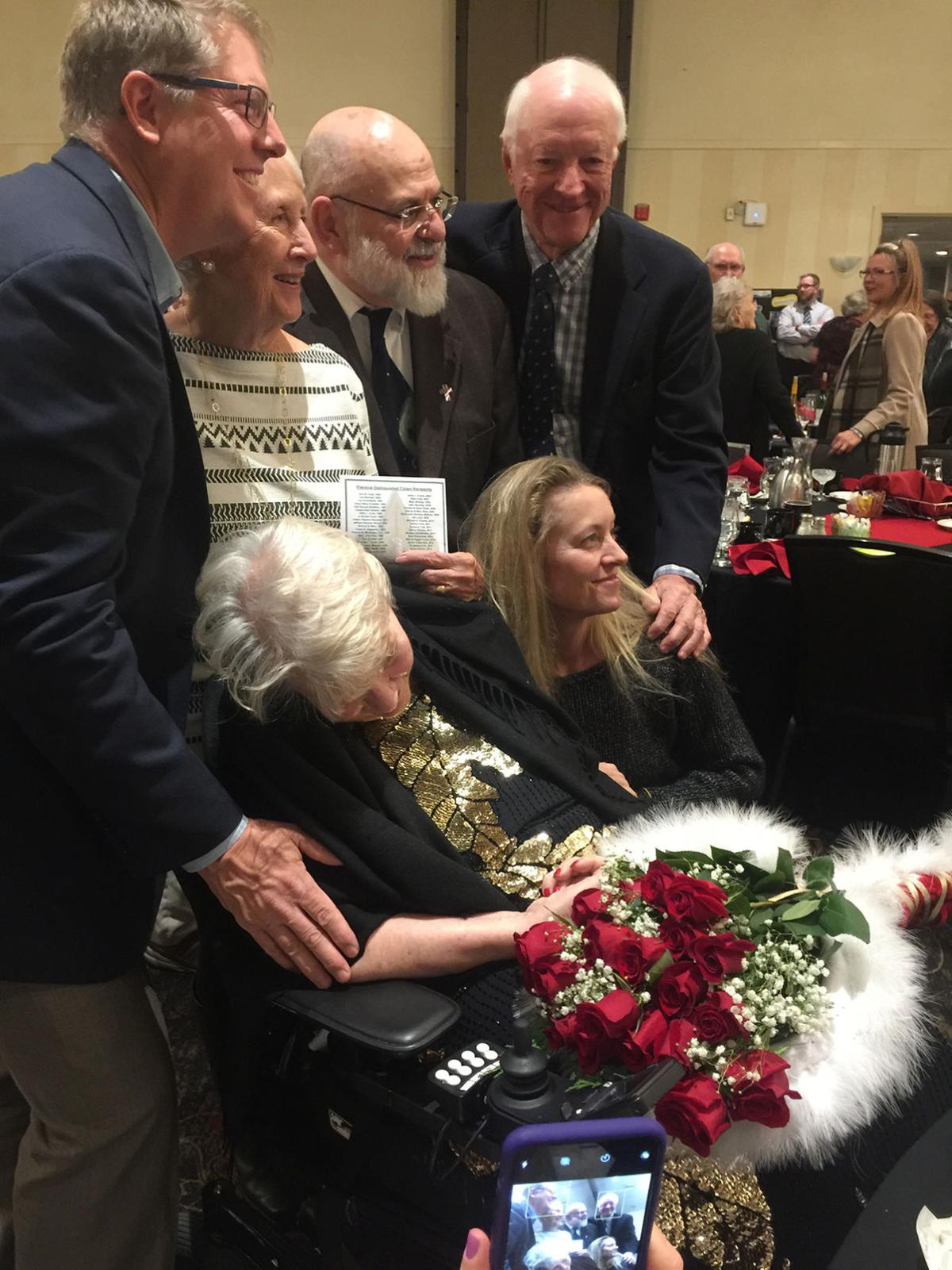 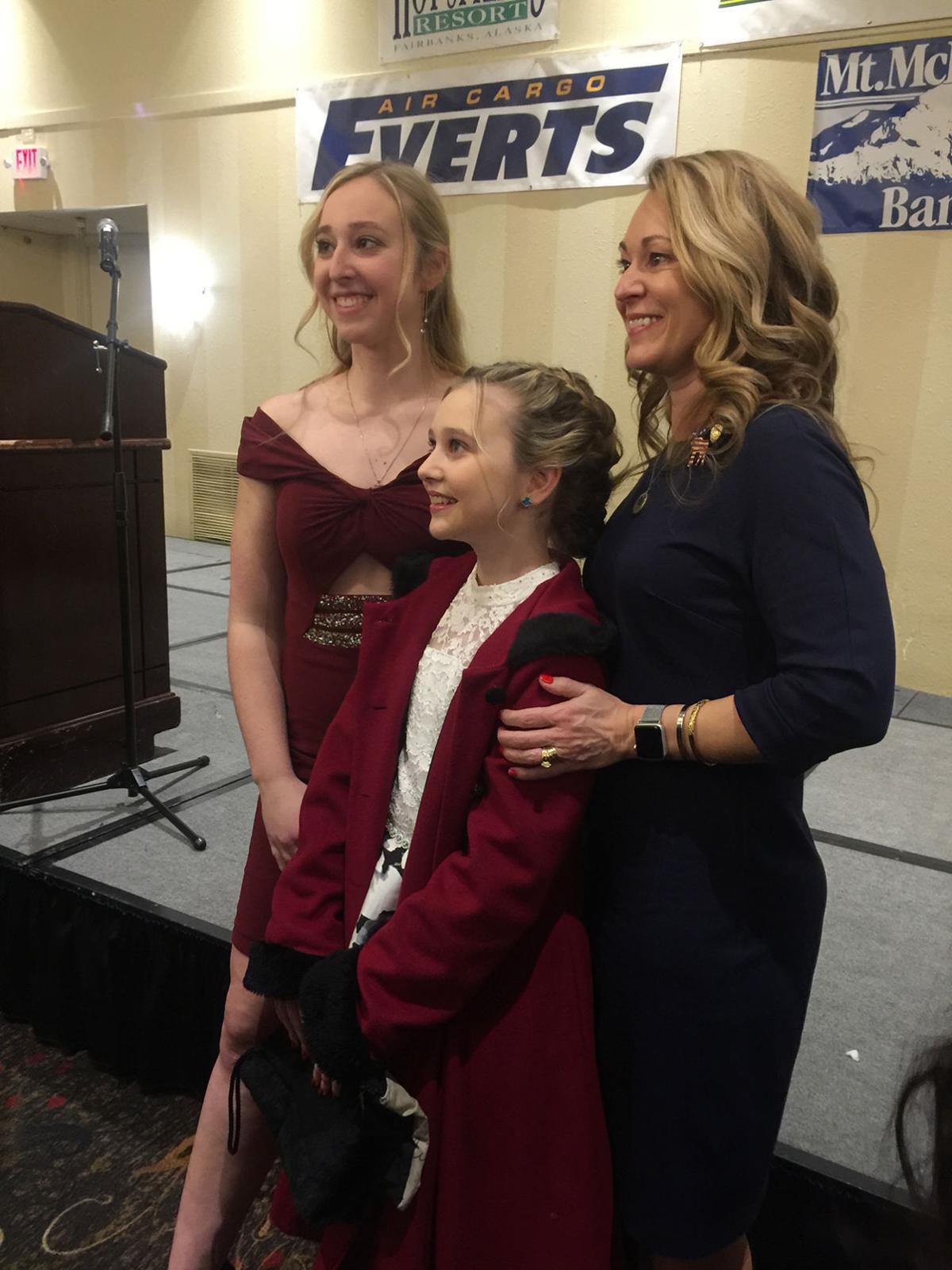 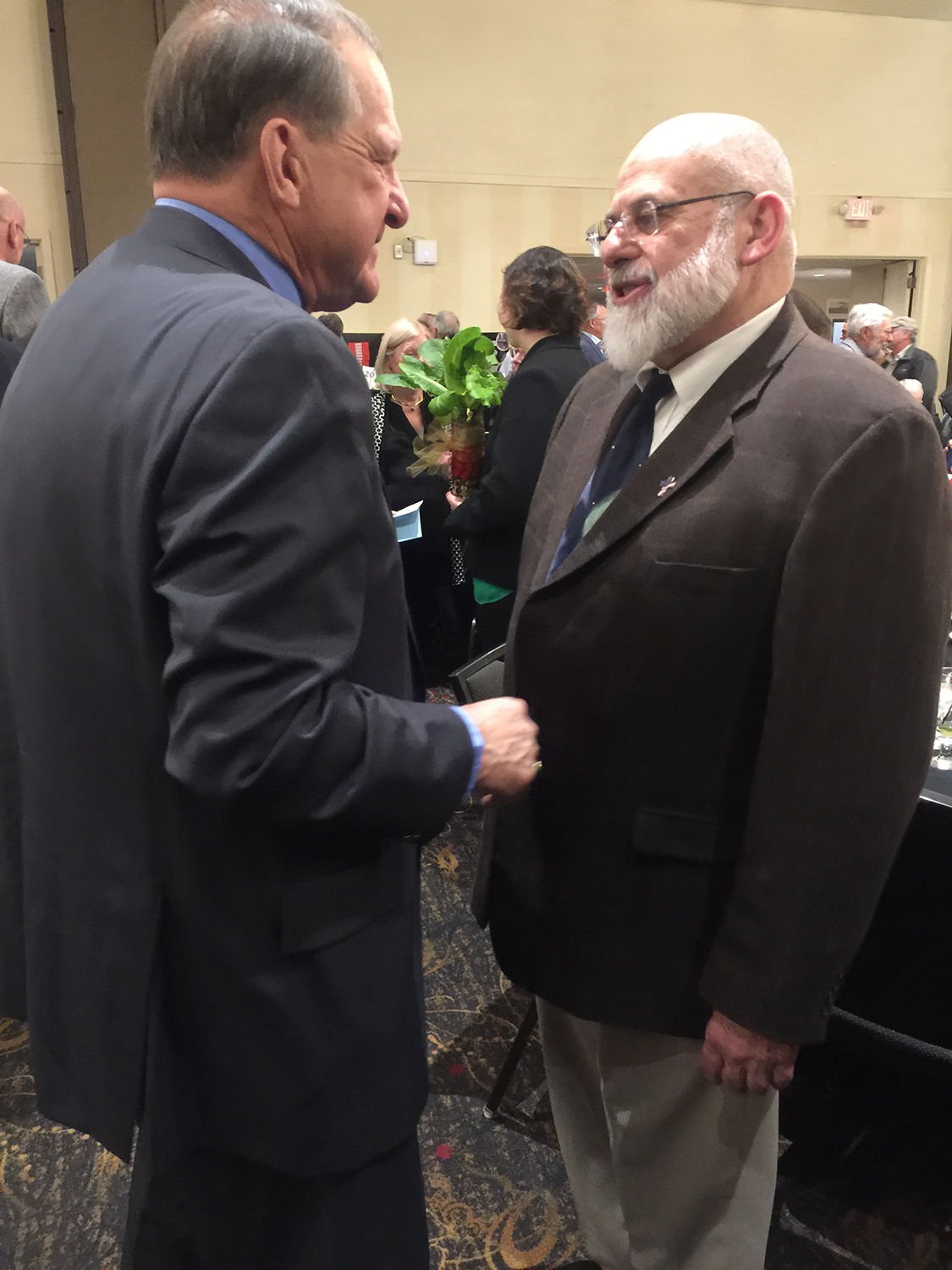 Bernie Karl gets congratulations from Jeff Cook, one of hundreds of people who showed up to honor Bernie and Connie Karl. Kris Capps/News-Miner 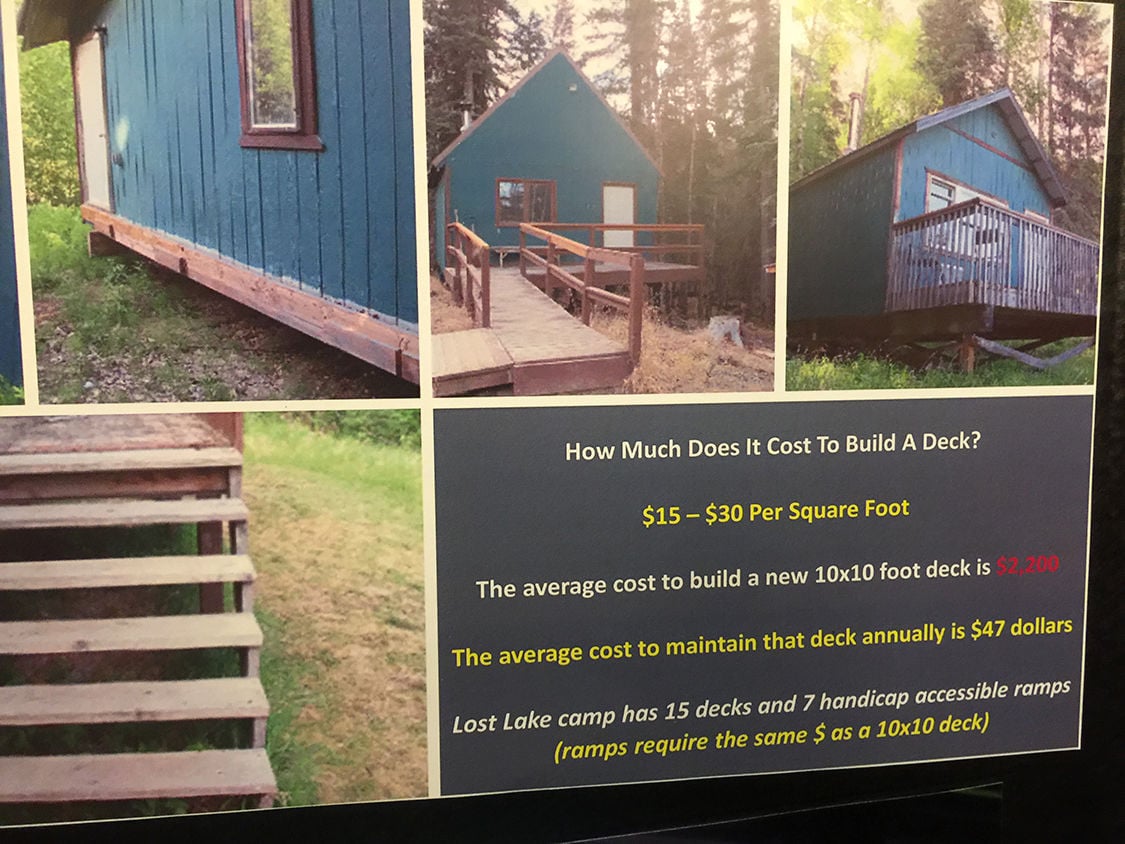 The award ceremony also raised an estimated $112,000 for the maintenance fund of the boy scout camp at Lost Lake. Kris Capps/News-Miner

Bernie Karl gets congratulations from Jeff Cook, one of hundreds of people who showed up to honor Bernie and Connie Karl. Kris Capps/News-Miner

The award ceremony also raised an estimated $112,000 for the maintenance fund of the boy scout camp at Lost Lake. Kris Capps/News-Miner

Bernie and Connie Karl are imagineers who make good things happen in Fairbanks and throughout the state of Alaska.

Bernie is a loud, brash visionary.

“He’s a man with vision. The trouble is, he has too many,” said his wife, Connie, in a special video created by Caterpillar Inc. that aired Wednesday night at the Westmark Hotel’s Gold Room. But many of those visions come to fruition because Bernie never gives up. In his mind, real failure comes from not trying.

“I imagine things and then we do it,” Bernie said.

This week, friends from Fairbanks and around the country gathered to honor the couple for their dedication to this community and the state in an evening focused on family, friends and community. They were recognized as Distinguished Citizens by the Midnight Sun Council/Boy Scouts of America. During the award ceremony, they raised an estimated $112,000 for the maintenance fund at the Lost Lake Boy Scout camp.

“Everything Bernie does today is part of the future of Alaska,” said longtime friend Jim Whitaker. “He is leaving this place a better place than he found it.”

“My parents said, ‘The only cold thing in Alaska is the weather,’ and I always found that to be true,” said their daughter, Amber. “I am proud to be their daughter.”

She went on to describe her parents: Connie was the youngest of five children and the only girl. Bernie was sixth of 16 children. Both shared an adventurous spirit and came to Alaska on their own. They met while working on the trans-Alaska oil pipeline.

The Karls never miss seeing their two granddaughters in person on their birthdays. Every year, they fly 3,600 miles to Illinois for Ava’s birthday in March and Sara’s birthday in November, their mother said.

Anyone who knows Bernie knows he is a man who speaks plainly. His language is often colorful and sprinkled with words that have to be paraphrased for purposes of stories like this. So a highlight of the evening was a tongue-in-cheek video created by Ava, 15, and Sara, 13, featuring all of Bernie’s off-color sayings.

“This is not their usual vocabulary,” their mother warned the audience, who roared with laughter during the presentation.

Known for his continual optimism, Bernie always says things like: “I’ve never had a bad day in my life and I’m not gonna start now,” and “We don’t have problems, we only have opportunities.”

Of course, when things get a little slow at meetings, he regularly breaks out his squawking duck call to get things moving again.

“This spirit of optimism is infectious. It’s contagious,” Whitaker said. “They lead the parade of optimism in Fairbanks.”

The Karls helped demonstrate that Fairbanks businesses can compete on a global level, Whitaker said, and noted how they created business opportunities with Russia, China, Japan and Germany. They boost tourism with their operation of Chena Hot Springs Resort. They helped reorganize and rebuild Ice Alaska. They are tireless promoters of the military banquet, the Rubber Duckie Race and innovators of renewable energy, he added. They grow produce 365 days a year at Chena Hot Springs.

The Karls are well-known for their dedication to geothermal technology. Chena Hot Springs is the lowest temperature geothermal resource to be used for commercial power production in the world. Geophysicists John Ziagos and Roy Mink shared news that inventor Roy E. McAlister and the Karls will create the first hydrogen plant using geothermal technology. That new patent is dedicated to the Karls “in appreciation of selfless and tireless service to improve the standard of living, health, comfort and happiness of all citizens in Fairbanks, Alaska and the United States of America.”

“I’ve learned firsthand we don’t need more engineers in this country, we need more imagineers,” said Sen. Lisa Murkowski, noting that wherever Bernie goes, Connie is with him.

They are a team. Their devotion was evident at the award ceremony, where Bernie escorted Connie to the stage in her wheelchair. She was diagnosed with amyotrophic lateral sclerosis, or ALS, in January and can no longer speak or walk.

“I am the wealthiest human being you’ve ever met and it has nothing to do with money,” Bernie said. “It has to do with my wife, who loves me.

“You may not have noticed, but “I’m no prize,” he said, adding, “Love is the most powerful emotion in the world. Put hard work with it and it’s a winning combination.