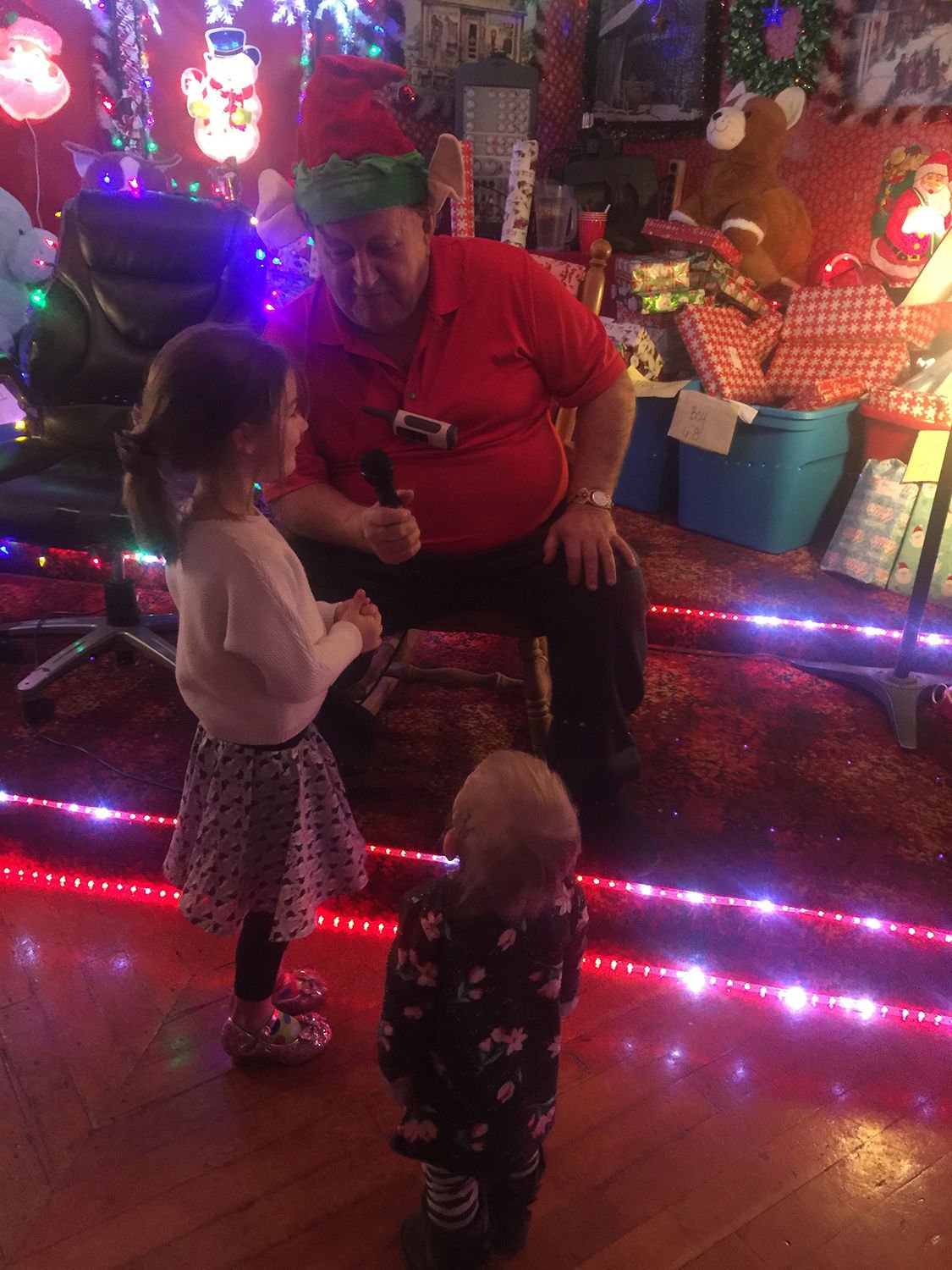 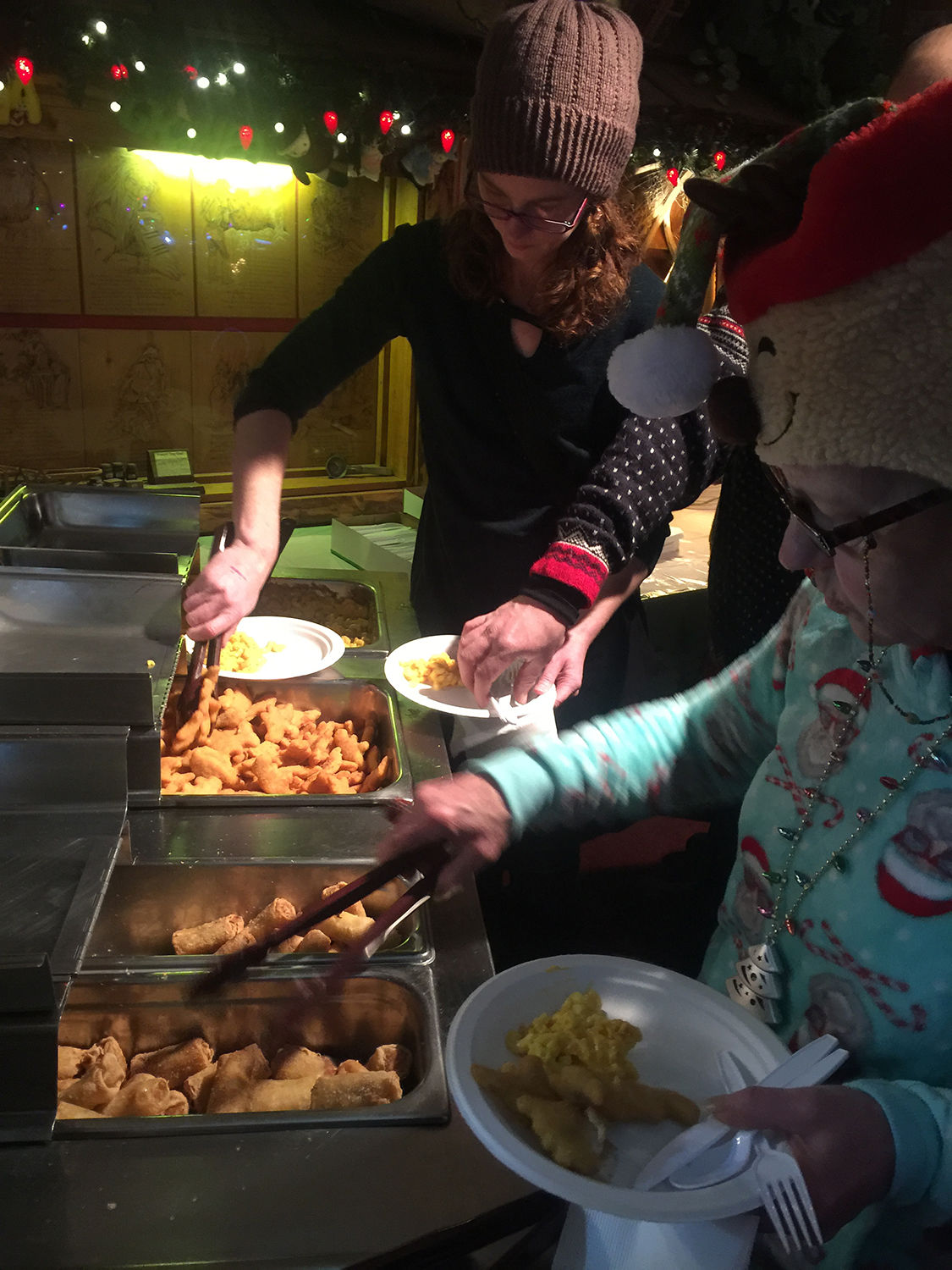 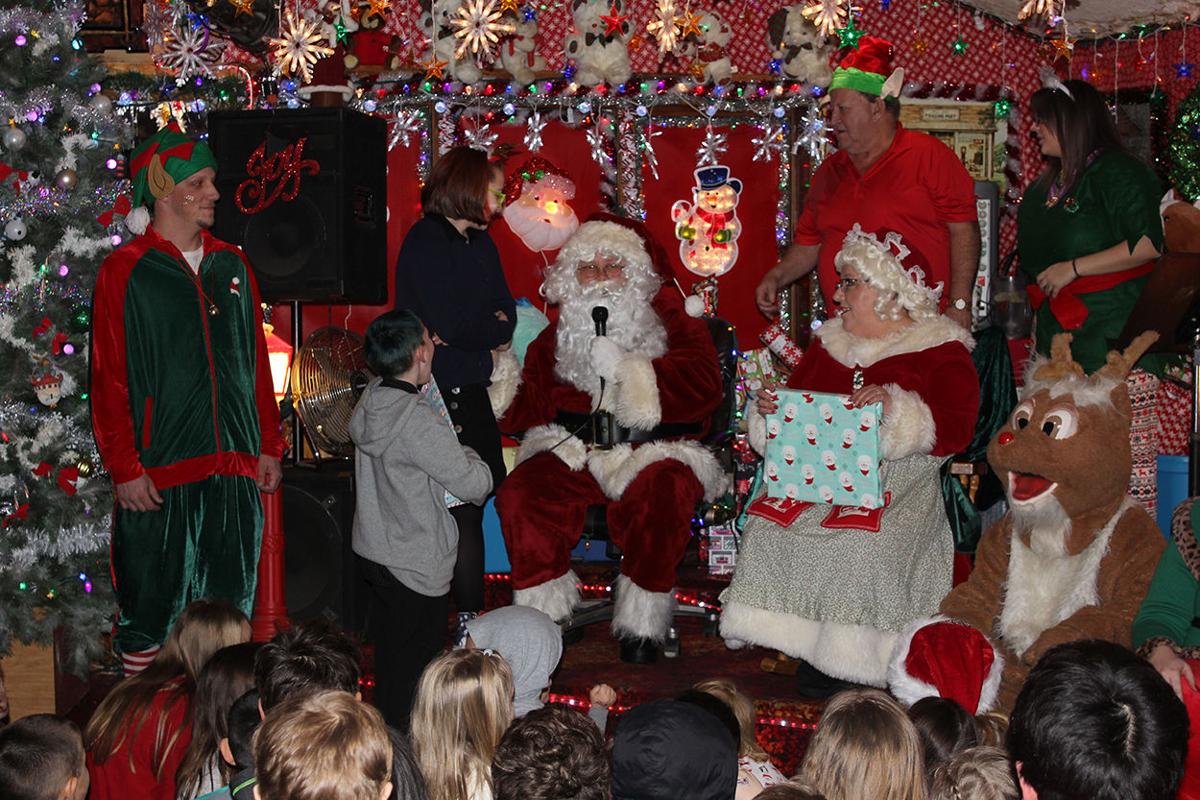 Every child had a special moment with Santa and Mrs. Claus at the annual Chatanika Christmas party. Kris Capps/News-Miner 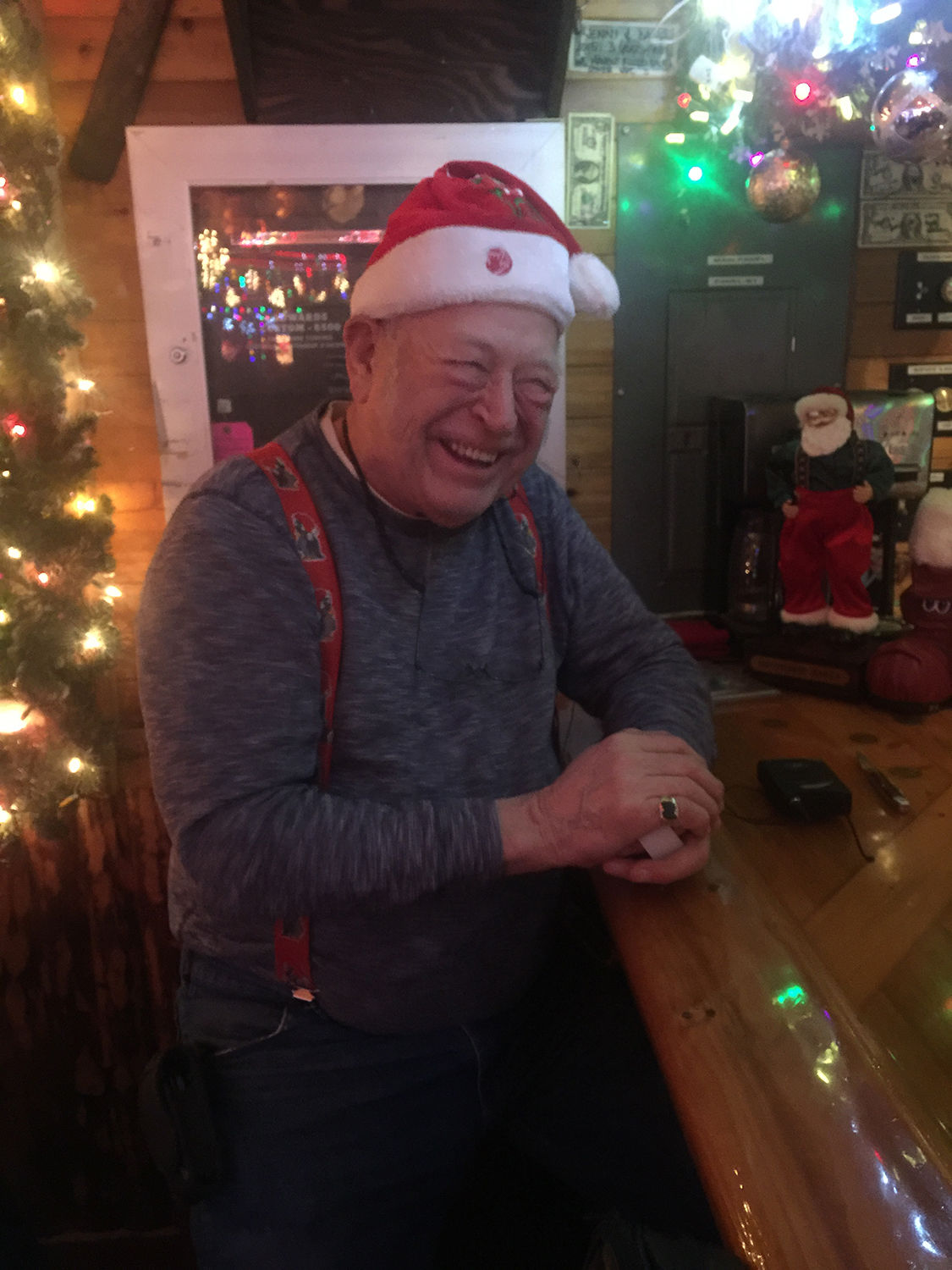 Gene Hansen aka Frosty has been Frosty's voice for 45 years at the Chatanika Christmas party. Kris Capps/News-Miner 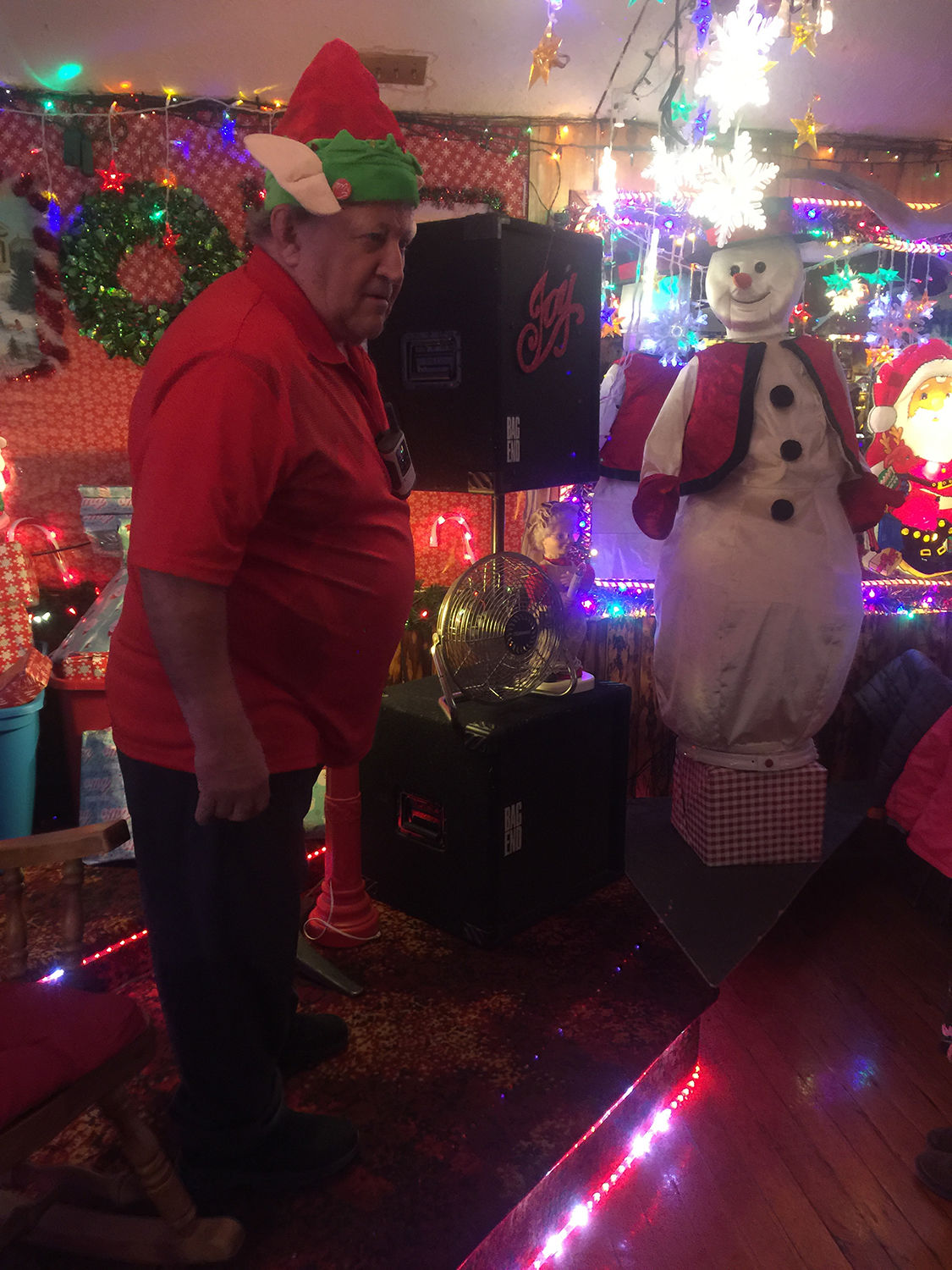 Every child had a special moment with Santa and Mrs. Claus at the annual Chatanika Christmas party. Kris Capps/News-Miner

Gene Hansen aka Frosty has been Frosty's voice for 45 years at the Chatanika Christmas party. Kris Capps/News-Miner

It was about 30 degrees below zero outside, but inside the Chatanika Lodge, everything was merry and bright.

The lodge was filled with families. At last count, 58 families and 108 children braved icy roads and Arctic temperatures to be there. That meant Santa and Mrs. Claus were due for a busy night.

But first, kids got to talk to Frosty the Snowman, a giant animatronic snowman who cheerfully carried on conversations with youngsters. The voice of Frosty is Gene Hansen, who has played this role for the past 15 years. Although he sits far from Frosty, he can hear what children say into a microphone and quickly and easily responds. He has also attended every one of these 45 annual celebrations.

This all happens at Chatanika Lodge, about 20 miles north of Fairbanks on the Steese Highway. It’s an annual event for many families. This year, there were at least three families who had three generations attending.

All the festivities take place inside the lodge under a canopy of 35,000 Christmas lights. Mebble Hansen used to count every one of those lights. Years ago, the lodge held a special contest to see whether anyone could guess the exact number of bright lights.

Owner Ron Franklin estimated there are about 35,000 Christmas lights amid the holiday decorations.

A special buffet geared toward children is free for ages 11 and under — macaroni and cheese, dino chicken strips, chicken egg rolls and lots and lots of french fries.

“All kids love macaroni and cheese,” said Shirley Franklin, who spearheads the holiday gala with her husband.

The highlight of the evening was when Santa and Mrs. Claus arrived. They arrived in an open sleigh, pulled by a snowmachine and both were covered in 2,500 Christmas lights. They were accompanied by the blaring sound of Christmas carols.

Then, once Santa and Mrs. Claus were settled on the brightly lit holiday stage, every one of those children got to sit on Santa’s lap and receive a special present, just for them. That’s why families fill out a short form when they arrive, with names and ages of their children. Frosty can announce their names when it is their turn to visit Santa and elves can provide the perfect present.

Ron Franklin and his helpers, with the help of the Chatanika Community nonprofit, buy these presents themselves every year, the day after Thanksgiving. Donations are also always accepted.

The same thing happened Friday, when Chatanika Lodge held a similar special celebration for families with special needs children. That event began six years ago, and all the excitement is scaled down a bit for those children. This year, 10 families and 34 children attended that event.

There were a lot of new people attending this year, including Maria Masters from Michigan, who was visiting her daughter, Amber, and her granddaughter. She was dressed in festive attire with a Santa cap upon her head as she helped herself to dino chicken strips.

“I’m embarrassing her,” she laughed, noting that her daughter was not wearing holiday attire.

“This is what makes Christmas for me,” he said.