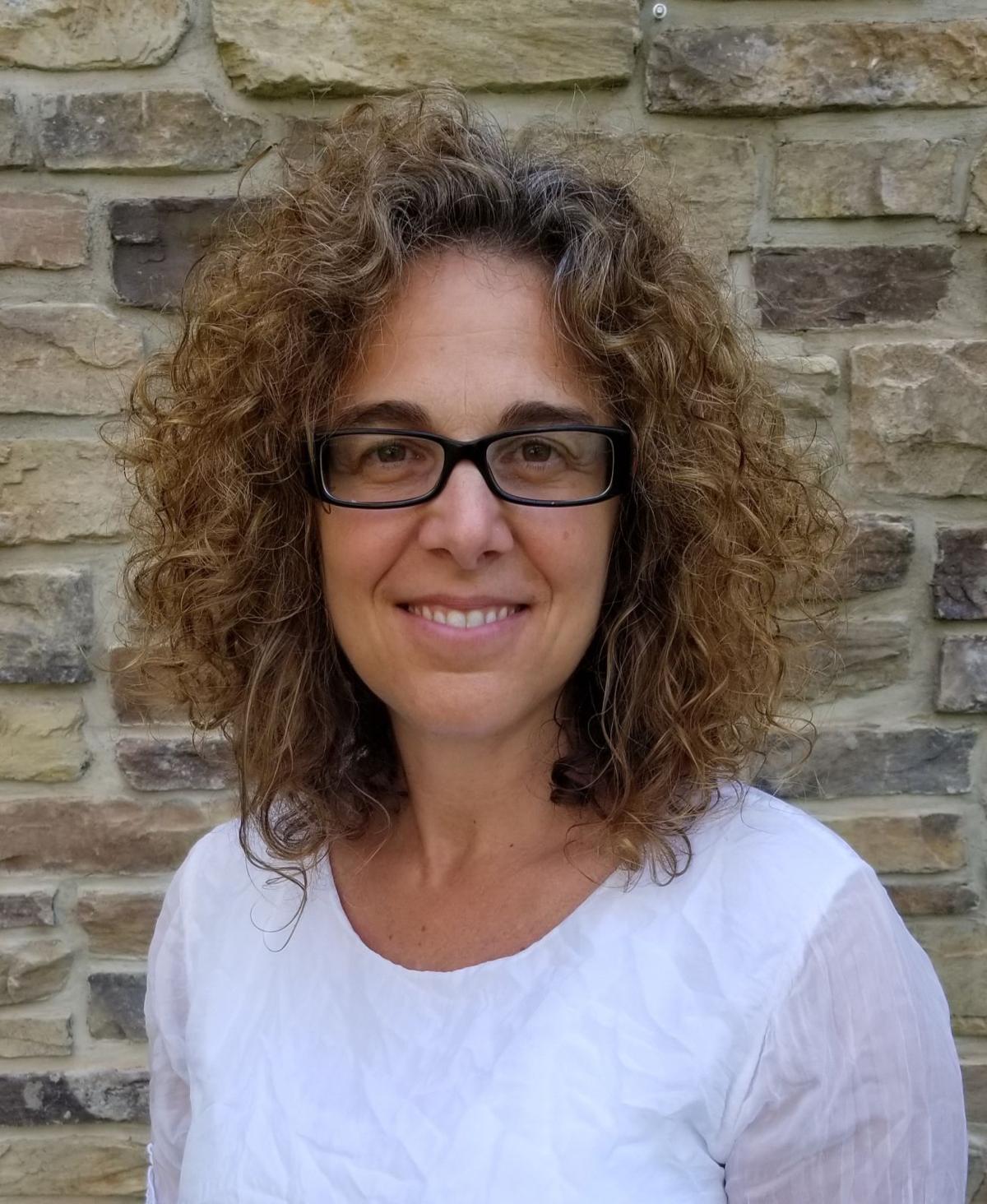 West Valley High School teacher Amy Gallaway is one of three finalists for Alaska Teacher of the Year, according to a Tuesday, Sept. 3, 2019 announcement from the state Department of Education and Early Development. 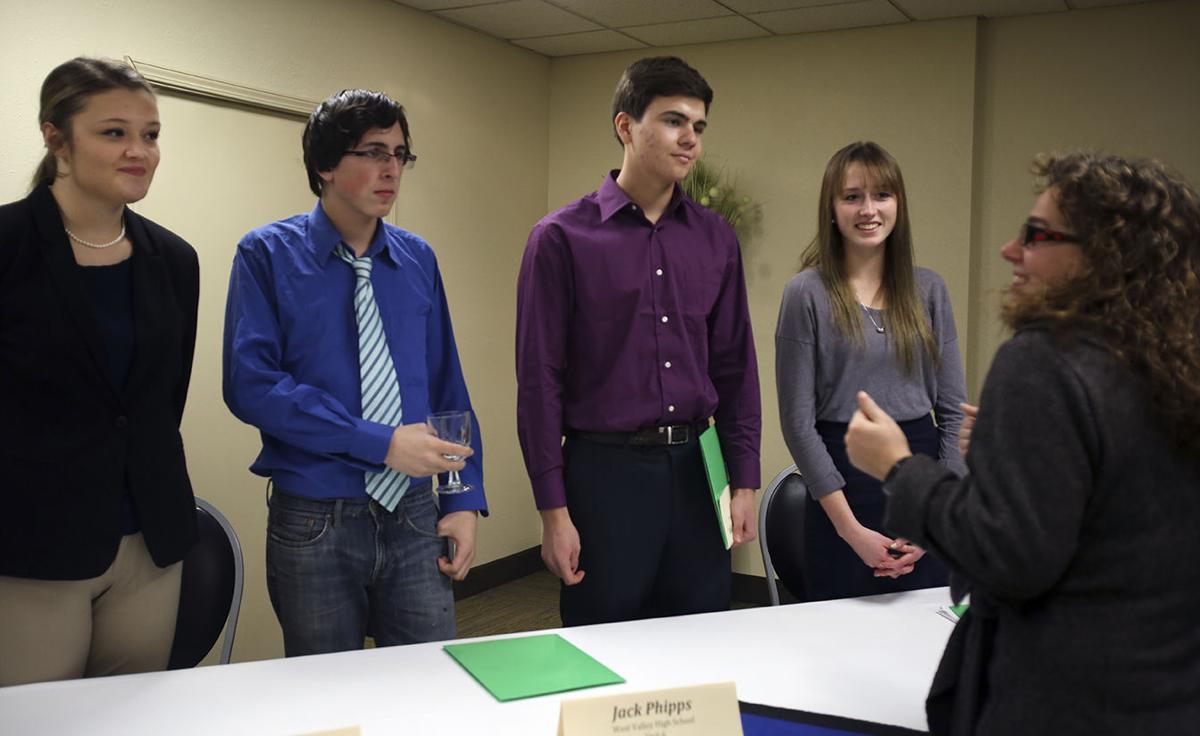 West Valley government teacher Amy Gallaway, right, talks to her students Jessica Rice, left to right, Jack Phipps, Mike Peretolchyn and Aubrea Stoltz after their presentation on immigration for the We the People high school competition at Westmark Hotel on Wednesday, December 3, 2014.

West Valley High School teacher Amy Gallaway is one of three finalists for Alaska Teacher of the Year, according to a Tuesday, Sept. 3, 2019 announcement from the state Department of Education and Early Development.

West Valley government teacher Amy Gallaway, right, talks to her students Jessica Rice, left to right, Jack Phipps, Mike Peretolchyn and Aubrea Stoltz after their presentation on immigration for the We the People high school competition at Westmark Hotel on Wednesday, December 3, 2014.

A West Valley teacher is one of three finalists for 2020 Alaska Teacher of the Year.

Amy Gallaway, a government, history and career and technical education teacher, is in the running for the honor, which is decided annually by the Alaska Department of Education and Early Development.

Gallaway said she found out she had been selected when she was called into the principal’s office on Friday.

“My superintendent, Dr. (Karen) Gaborik, came to school and it was very sweet,” she said.

Gallaway said she was initially shocked because the process for becoming a finalist is rigorous. Now, Gallaway says she feels “super humbled,” because she knows many amazing educators and she wishes there were more opportunities like this for teachers.

The Alaska Teacher of the Year can be called upon to speak at education conferences and participate in statewide education working groups. The teacher chosen also serves as the state’s nominee for the National Teacher of the Year and becomes a member of Education Commissioner Michael Johnson’s Teacher Advisory Council.

The two other teachers in the running this year are Pamela Garcia with Auke Bay Elementary School in Juneau and Ben Griese, who teaches at Chief Ivan Blunka School in New Stuyahok.

Gallaway has been at West Valley for the majority of her teaching career. However, she started out on a different career path.

She taught at Nuiqsut, in Homer and at Randy Smith Middle School in Fairbanks before coming to West Valley High School in 2002.

“I wanted to come here because I love the community of Fairbanks and I’ve stayed because there isn’t one year that I have said, ‘Oh my gosh, I can’t handle this community, I can’t do this,’” Gallaway said. “Every year I’m grateful that I get to work in such a welcoming, diverse and really engaged community.”

She says she’s committed to student empowerment and emphasizing student voices on daily. Whether it’s a class discussion or something to help students understand their role in the community, she said whatever the students do, she wants the activity to have “relevance and rigor” to help connect them with community.

“That pretty much drives what happens every day in my classroom,” she said.

Gallaway is the Kid’s Voting liaison, her department puts on a local government candidate forum, and she wrote and piloted a course called "Innovation and Inquiry" in which students combine entrepreneurship and civics.

She also teaches the We the People government class and has brought students to participate in the national We the People: The Citizen and the Constitution Program.

“We’ve been to D.C. three times. We’ve won the state competition a number of times,” she said.

In the coming week, she said she’s bringing the borough mayor and Borough Assembly members to her classroom to let students have the chance to speak with them.

Gallaway praised West Valley and her colleagues for being exceptional, saying she never would have been nominated without the school’s support and opportunities. She said she believes she has some of the best students in the state, as well.

“They just really embrace me and the crazy things I ask them to do,” she said.

Gallaway will have to travel to Anchorage in a few weeks, where she will be interviewed by a committee consisting of Alaska’s 2019 Teacher of the Year, Danielle Riha, and members of major Alaska educational associations.

The committee will take into account a written application, a video snapshot of the teacher in the classroom, and an interview, then recommend a 2020 Alaska Teacher of the Year and an alternate to the education commissioner.