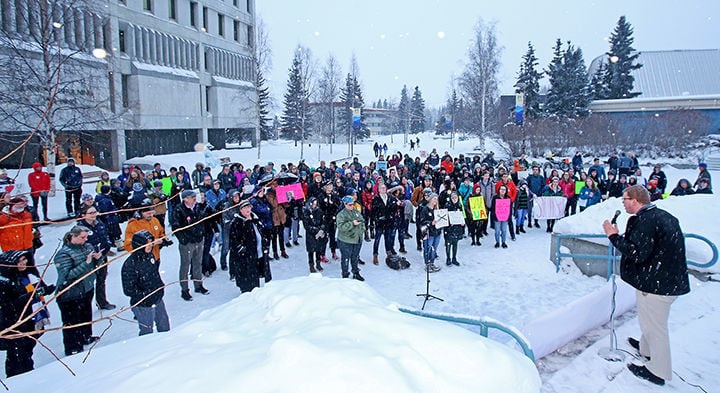 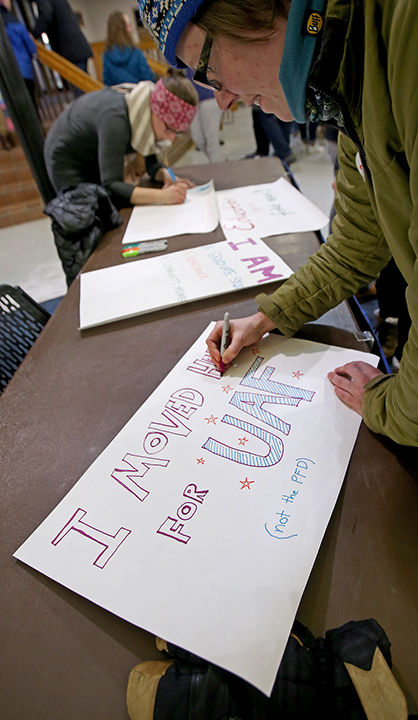 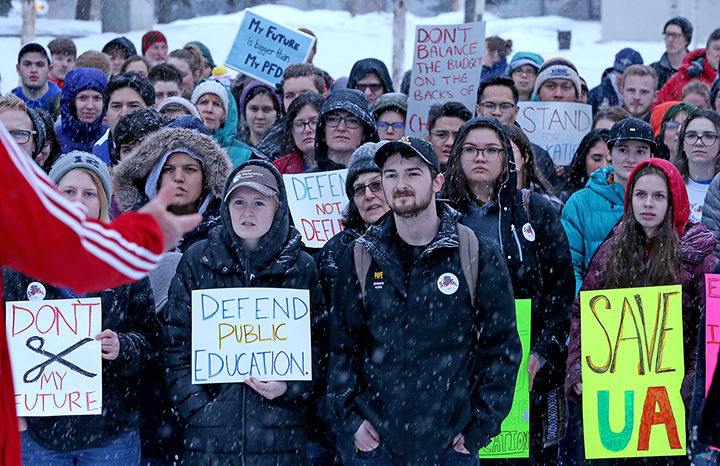 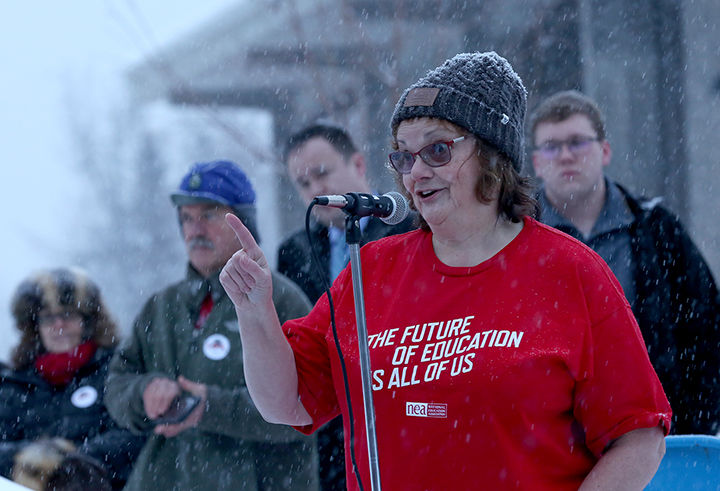 The protest was organized in part by UAF students, one of whom is Aiden Earnest, a political science student.

“As a UAF student the cuts are very drastic to the UA system, but also the cuts to education as a whole in Alaska really struck me personally,” Earnest said. “I’ve been here through U-Park Elementary, Randy Smith Middle, West Valley and now I’m at UAF. Education is really important to me. I’ve had the experience of having amazing teachers here, and I think if we continue to devalue our education by not funding it, we’re not going to be creating an environment for learning.”

The rally was held in Constitution Park in the center of campus and was opened by another student organizer, Abigail Steffen.

“A cut of this value would have immense negative impacts on the UA system of Alaska,” Steffen said to the crowd. Steffen’s mention of the $134 million cut was met with boos.

Ed Alexander, rural educator, rural UA campus manager and member of the Gwich’in Council’s Board of Directors, spoke next. Alexander talked about his positive experience at UAF.

“A university that allowed me to go home and teach in my community of Fort Yukon,” Alexander said.

Howard Maxwell, a member of the UAF alumni, former university professor and former school district teacher, spoke to the crowd as “a proud product of public school.”

“I graduated from UAF 32 years ago with a master’s degree,” Maxwell said.

“I am who I am because of all the great teachers I had in that time. We’re here because a politician in Juneau decided that public education isn’t important. He believes that education isn’t an essential service of government.”

These comments were also met with boos from the crowd.

At least nine other students, teachers, university administrators and university professors spoke at the rally in support for the university and education as a whole.

Earlier in the day, more than 80 students at Lathrop and West Valley high schools in Fairbanks walked out of school at noon in protest of proposed cuts to public education.

Juliana Adams, a West Valley student, was also present at the UAF rally.

“A lot of my friends are planning to go here, not just because it’s local but because they want to go here and the programs here are ones they really want because they’re good,” Adams said.

Dunleavy has proposed cutting the Department of Education’s budget by nearly $325 million.

“We want to show Dunleavy we are not going to stand for what he is going to do to us,” West Valley freshman Lily Frick said in an interview.

The Fairbanks North Star Borough School District would lose about $30 million in state support, or 12-13 percent of its $243 million budget, if cuts are approved.

Most of the education budget at the Fairbanks school district goes toward salaries and benefits, and the cut would result in the elimination of as many as 235 jobs, according to a report provided this week to the Board of Education.

The “Stand for AK Education” walkouts were promoted online and billed as a statewide walkout, though the protest did not appear to catch on beyond Lathrop and West Valley.

One student left Hutchison High School at 12:06 p.m., but it was not clear that protesting was the purpose, according to the school secretary.

High school principals were advised Tuesday of the possibility of a walkout, according to school district spokeswoman Sharice Walker. Only Lathrop and West Valley confirmed participation, she said.

The number of students to walk out at Lathrop was 26, according to the News-Miner photo editor, who was at the scene. West Valley Principal Sarah Gillam counted 62 students participating from her school.

Spokeswomen at school districts in Southcentral Alaska were contacted. They said students in Anchorage, the Kenai Peninsula Borough and the Matanuska-Susitna Borough were not participating.

The Lathrop protest involved a couple of dozen students and was loosely organized. Students who gathered outside the school took turns speaking out against state budget cuts.

At West Valley, students poured out of the school with some walking to their cars. The rest gathered by the curb outside the front doors and stood in small groups, talking and looking at their phones.

Freshman Tyler Galemore said he feels like public education is taking the brunt of cuts being suggested by Dunleavy.

Freshman Nicholas Bond is worried about what classes will be available to him in years to come.

“I don’t want teachers to lose their jobs and to lose potential classes that might be fun, such as computer coding,” Bond said.

Parents were reportedly notified of the walkouts and advised that the absence from class would be counted as unexcused unless parents requested otherwise.

Correction: The rallies were held Wednesday, March 6. An incorrect day was cited in earlier versions of this story.