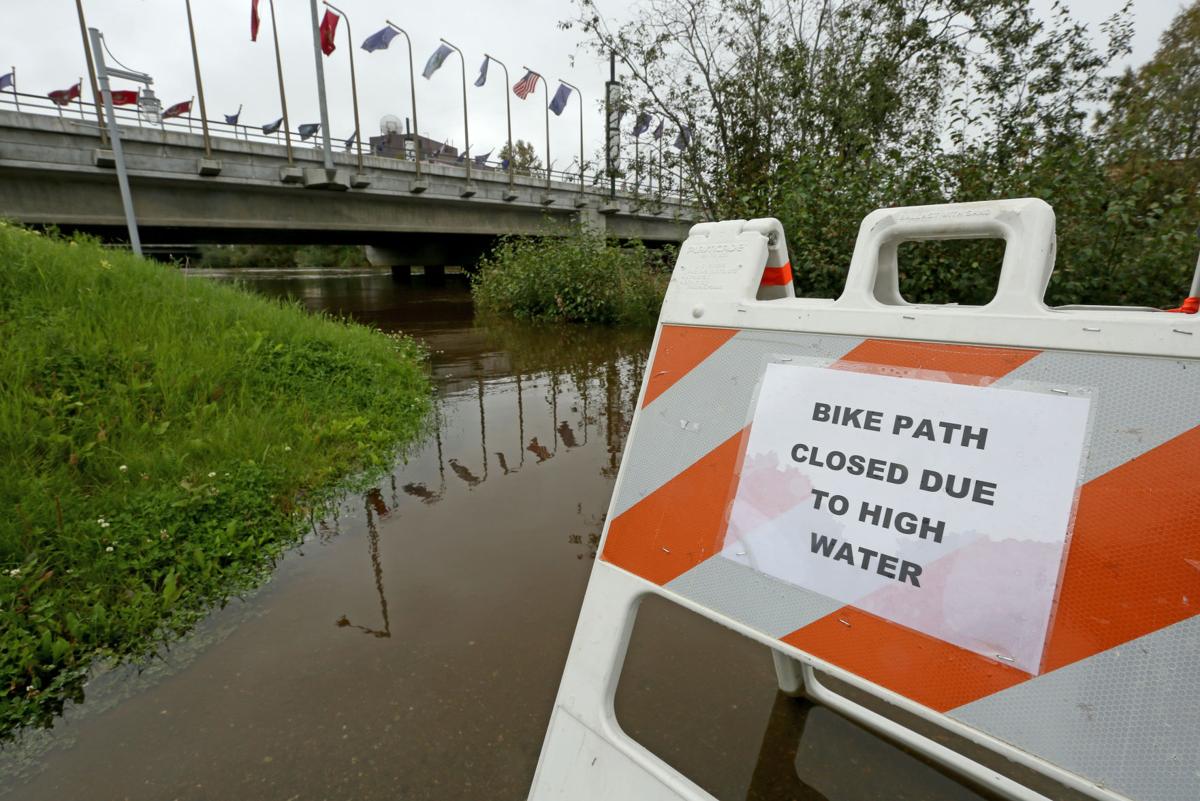 A sign warns pedestrians of the flooded bike path under the Veteran's Memorial Bridge as the water level continues to rise in the Chena River Friday afternoon, August 16, 2019. Eric Engman/News-Miner 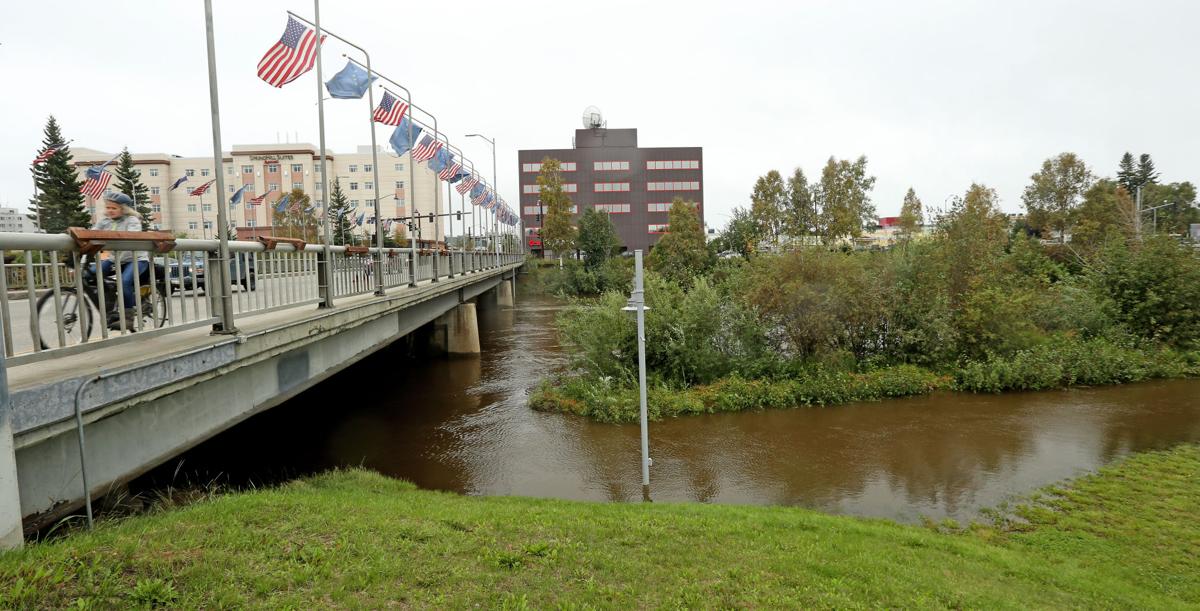 A bicyclist crosses the Cushman Street Bridge while the bike path under the bridge is submerged in water as the water level continues to rise in the Chena River Friday afternoon, August 16, 2019. Eric Engman/News-Miner

A sign warns pedestrians of the flooded bike path under the Veteran's Memorial Bridge as the water level continues to rise in the Chena River Friday afternoon, August 16, 2019. Eric Engman/News-Miner

A bicyclist crosses the Cushman Street Bridge while the bike path under the bridge is submerged in water as the water level continues to rise in the Chena River Friday afternoon, August 16, 2019. Eric Engman/News-Miner

Around Fairbanks, there are flood warnings in effect for the upper Chena, Salcha and Goodpaster rivers, according to National Weather Service forecaster John Cowen. Flood advisories extend from Chatanika River to Nenana and south from there.

“Weather will actually be improving, however, in the next couple of days,” Cowen said.

As of 2 p.m. Friday, Cowen said most of the heavy rain moved south of Salcha and should continue in that direction, with some showers lingering in the Fairbanks area and tapering off Friday evening. However, this does not mean water levels will fall.

“I would ask that people be aware that rivers will continue to rise even after the rain moves out of the area,” he said.

Cowen said the rain that has fallen over the last few days will take a while to move through the system, and rivers will continue to rise today and possibly into Sunday.

“The mile 28 river access road, water has come up over the road and we had a cottonwood that came down there crossing the road, so we went ahead and closed that gate,” said Brooks Ludwig, superintendent of the Northern Area Office of the Alaska State Parks.

On Chena Hot Springs Road, the river access road at mile 37.7 is closed because it is beginning to flood and mile 39.5, across from Granite Tors Trail is closed, he said, with caution tape across entry points.

Water has yet to come into the Granite Tors parking lot or across the road at mile 37 but, according to Ludwig, the weather service is expecting the river to crest Saturday evening or Sunday morning.

The Department of Transportation has put signs through the area, cautioning people there could be water across the road and telling them to drive carefully.

In addition to the signs, Caitlin Frye, DOT spokeswoman, said the department will be monitoring the area through the weekend as the river continues to rise.

“We’ll take those signs down as soon as we feel it’s safe to travel,” Frye said.

In Fairbanks, DOT closed the pedestrian path that travels under Peger Road to Pioneer Park, according to Frye.

“The river is continuing to rise in that area as well,” she said, noting that the department does not know how long that will continue, and the area will be monitored.

Steady rain meant crumbling rockfall continued to fall onto the Parks Highway just north of the Nenana River Canyon area, from Mile 239 to 242.

“At this stage, it hasn’t really moved in any large manner,” Denali Borough Mayor Clay Walker said. “But there is a concern of potentially larger movement.”

Meanwhile, the Department of Transportation continues to clear debris as it falls. The highway is not closed.

“It’s such an important travel corridor, we really hope there’s not any kind of disruption there,” he said.

“It’s flowing through the woods and through the neighborhood again flooding Killian Road, Ranch Road and Himalaya Drive,” Walker said. “It might end up being more severe than last week, frankly.”

The bridge downstream of the Parks Highway, which leads to Usibelli Coal Mine washed out during the last rainstorm. It was rebuilt and has now washed out again.

During the last Dry Creek flood, the Denali Borough declared a disaster declaration and helped some homeowners regain temporary access to their property on Himalaya Drive. This event could be worse and there’s a possibility it would open the door to state funding, Walker said.

“We understand due to the scope of the last event, we weren’t eligible, but here, the scope continues and may grow, so of course we’ll pursue those avenues,” he added.

Longterm, the borough would like to find away to prevent Dry Creek from flowing into the woods, he said. It might be a berm project in the creek bed or a gravel extraction project to channelize the water and direct it away from the forest.

“Those are all things we’re going to work on,” he said.

People can send pictures of flooding to fairbanks.weather@noaa.gov or send them to the U.S. National Weather Service Fairbanks Alaska Facebook page. For information on road conditions, readers can visit 511.alaska.gov.