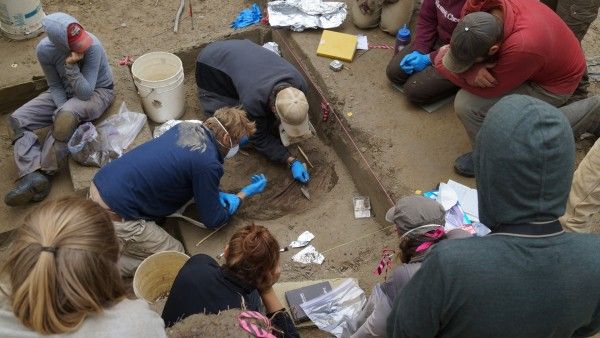 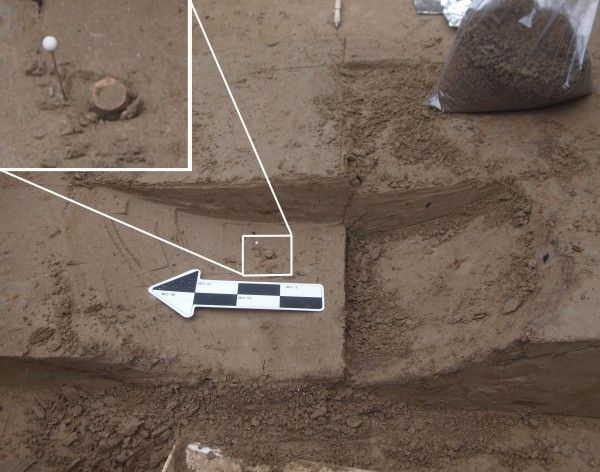 A salmon bone is show as it is excavated from the Upward Sun River site in Alaska. Image courtesy of Ben Potter, UAF

A salmon bone is show as it is excavated from the Upward Sun River site in Alaska. Image courtesy of Ben Potter, UAF

FAIRBANKS—The identification of ancient fish bones at a Tanana River archaeology site may end up altering the historical perception of both Ice Age humans and salmon runs in the Interior.

An analysis of the bones, which were discovered in 2010 in a buried cooking hearth in the Upward Sun River site, determined they belonged to spawning chum salmon from 11,500 years ago. It's the first physical evidence that ancient humans in the Interior, who were once thought to subsist on big game, took advantage of seasonal salmon runs.

The discovery also indicates that salmon were spawning in Alaska during the Ice Age. UAF biological anthropologist Carrin Halffman, who wrote about the discovery for the Proceedings of the National Academy of Sciences journal, said ancient salmon remains are rarely found because their delicate skeletons are rapidly dissolved by acidic soils.

Previously confirmed salmon runs in the Interior dated back only about 1,000 years. The specimens at the Tanana River site were likely preserved because they were quickly covered with sediment, Halffman said.

Although the scientific view of Ice Age diets has become more nuanced in the past few decades to include small mammals, birds and fish, the popular image of ancient humans continues to be dominated by images of woolly mammoths and other large animals.

Halffman analyzed the Upward Sun River site fish bones through stable isotype analysis and was able to determine they were sea-run chum salmon that traveled nearly 900 miles down the Yukon River drainage. Salmon remains were plentiful at the site, with about 300 samples collected.

The salmon discovery is the latest bonanza from the archaeological site, which was discovered southeast of Fairbanks along the Tanana River in 2006. Evidence of occupation dates back 13,300 years at the site, which is deeply buried and stratified like a layer cake.

Potter said those conditions have resulted in a remarkable dig, where human dwellings, ancient tools and human remains have all been discovered.

The 11,500-year-old partially cremated remains of a young boy were previously discovered in 2010 at the site, at the time making them the oldest ever found in the northern part of North America. In 2013, a separate burial site containing the remains of two infants from the same era was unearthed.

Discoveries at Upward Sun River have helped provide context for the customs, diets and lifestyles of Ice Age inhabitants of the region and won't be the last revelations the site offers, Potter said. A mountain of materials has been collected, and Potter figures it could take 20 more years to determine the full scope of those discoveries.

The National Science Foundation is helping to fund the work, which could include studies on DNA, climate change and shifting plant life in the area.

"It's an ongoing project, and it keeps getting more exciting," Potter said.