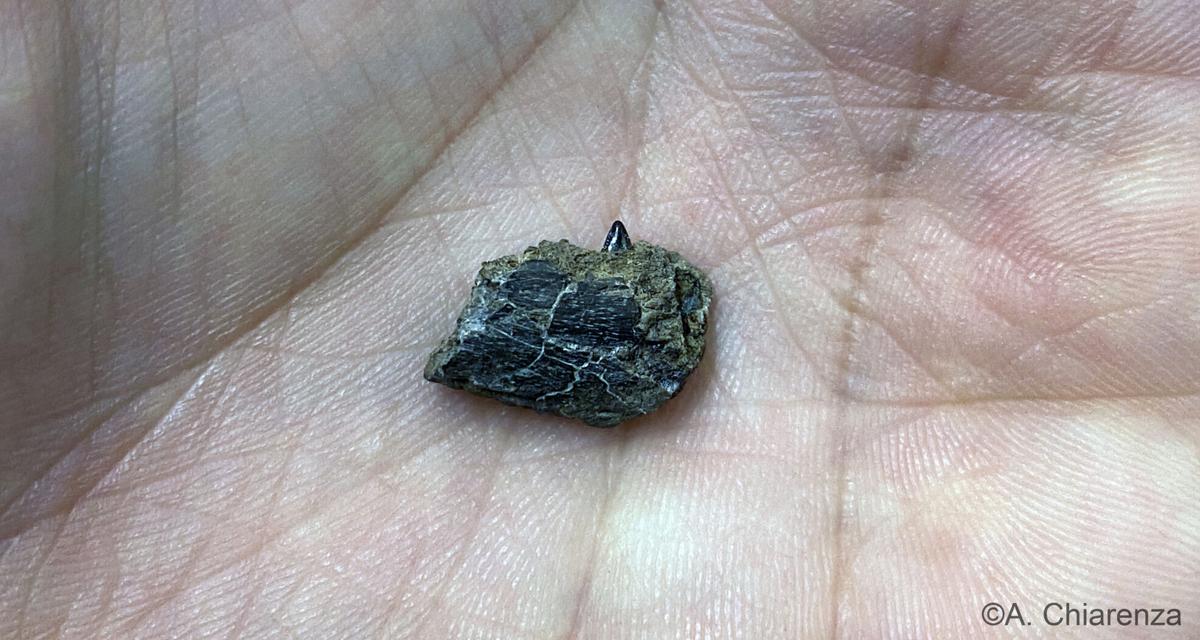 One tiny tooth erupts from the jaw of a juvenile fossil found on the North Slope of Alaska. (Alfio Alessandro Chiarenza/Southern Methodist University) 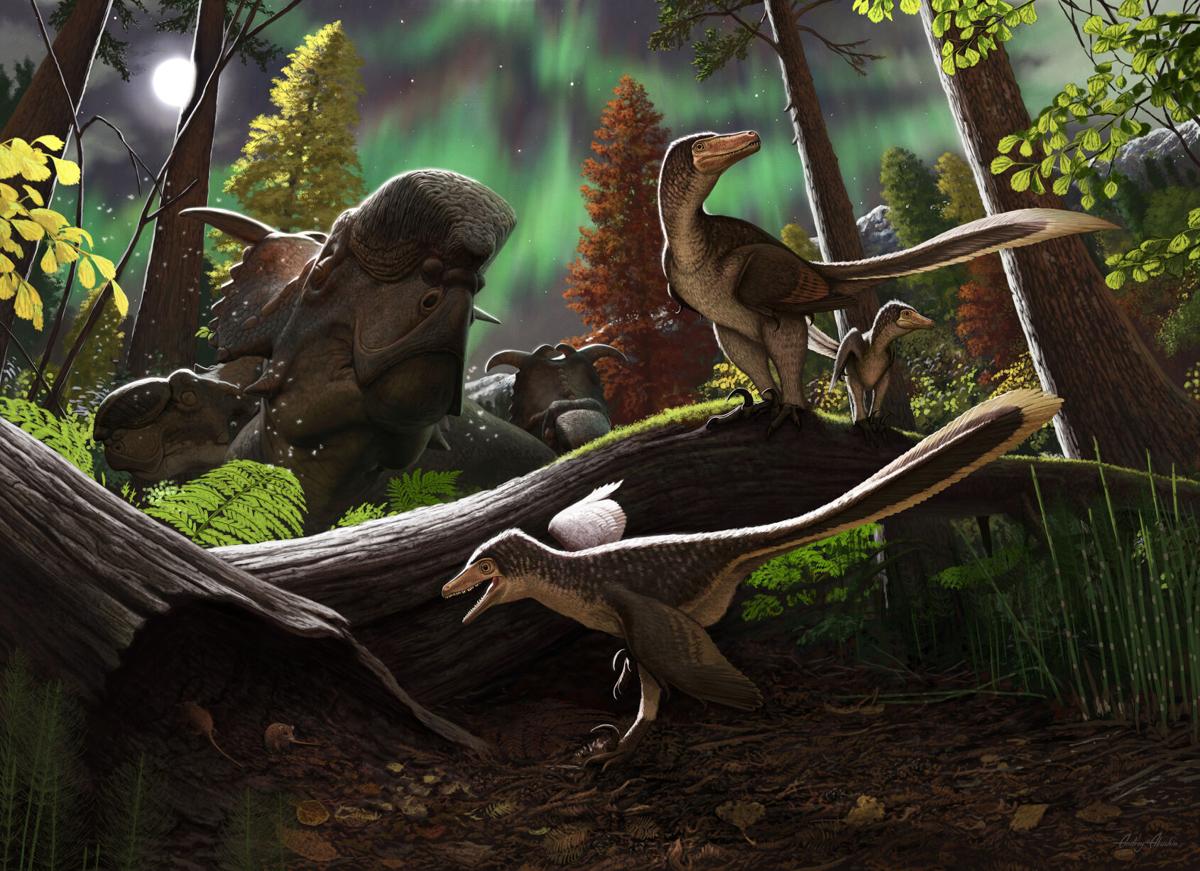 Artistic rendering of a juvenile dromaeosaur 70 million years ago on the Prince Creek Formation in northern Alaska.(Andrey Atuchin/Southern Methodist Univeristy) 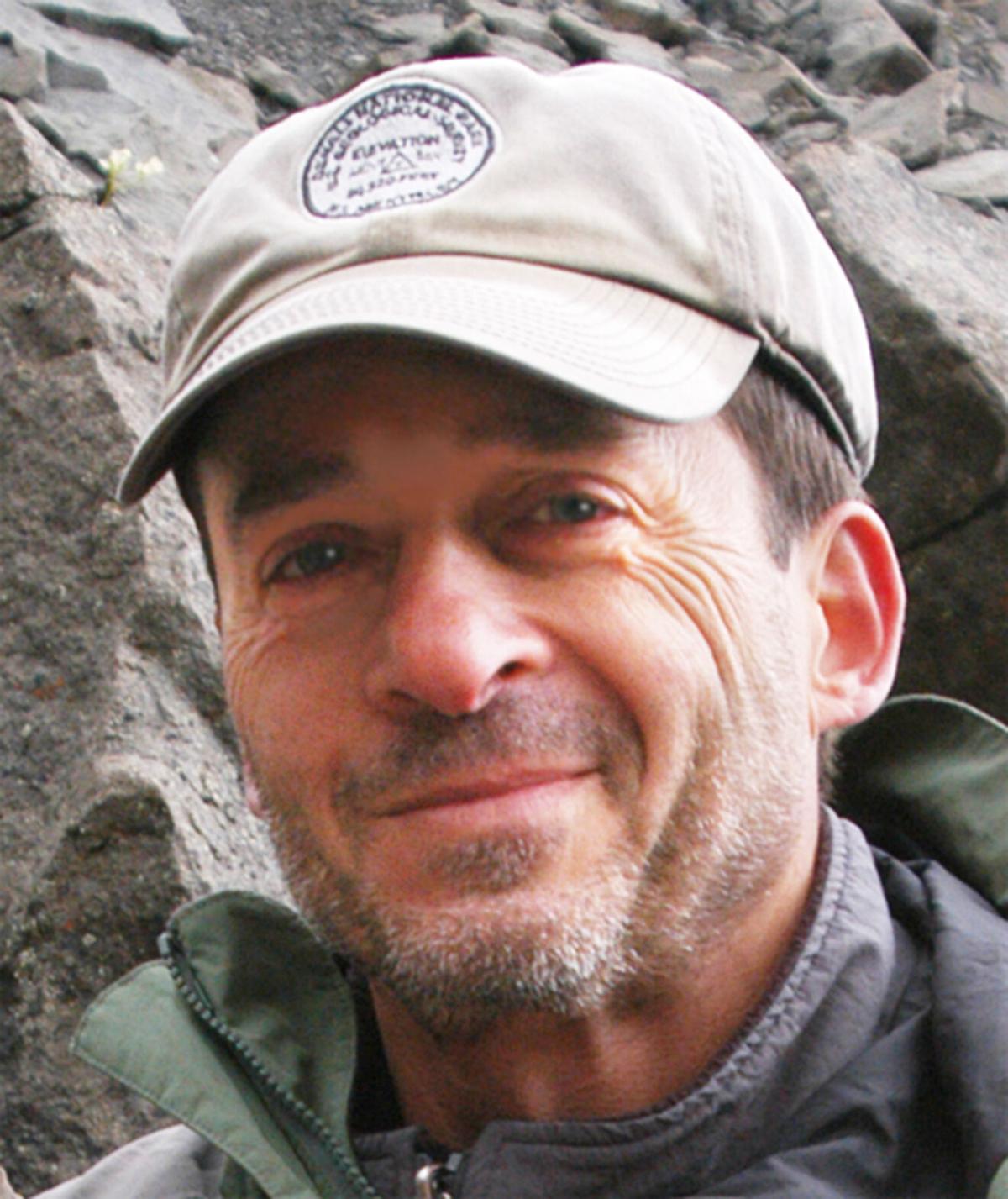 One tiny tooth erupts from the jaw of a juvenile fossil found on the North Slope of Alaska. (Alfio Alessandro Chiarenza/Southern Methodist University)

Artistic rendering of a juvenile dromaeosaur 70 million years ago on the Prince Creek Formation in northern Alaska.(Andrey Atuchin/Southern Methodist Univeristy)

After years of searching the Arctic, Southern Methodist University scientists have discovered the fragment of a baby dinosaur’s tiny jawbone, providing what they believe is a significant clue to the behavior of certain dinosaurs.

The theory: Some meat-eating dinosaurs, called dromaeosaurs, lived year-round in the Arctic.

Decades ago, scientists realized that birds might share a common ancestor with dromaeosaurs. So they thought that some dinosaurs migrated south with the changing seasons in search of food like modern-day birds.

Today, most researchers assume that polar dromaeosaurs made the Arctic their home year-round, because their relatively small sizes would make migration difficult.

Dr. Anthony Fiorillo and his team recently published their findings in PLOS One. The presence of this baby dinosaur also suggests that during the Cretaceous Period, the Arctic was rich in prey to support families of these meat-eating dinosaurs.

There would have been enough food available in the harsh Arctic environment to sustain a population of carnivorous dinosaurs, said Fiorillo. “To me, this specimen suggests that dromaeosaurs were thriving in an environment because their prey, the herbivorous dinosaurs, had also successfully adapted to an extreme environment,” he said.

More information on the lives of different polar dinosaurs can help scientists better understand how they adapted to live year-round in these colder, darker regions.

The discovery of this juvenile jawbone could also help in understanding the diversity of animals that lived in the ancient Arctic, said Dr. Patrick Druckenmiller, a paleontologist at the University of Alaska Museum of the North.

During the Cretaceous Period, which occurred between about 66 million and 145 million years ago, the Prince Creek Formation of northern Alaska was an open woodland filled with conifer trees and flowering plants. The ancient Arctic was probably a little warmer than it is today, but there would have been mountains, with peaks both high and cold enough to be topped with fields of snow.

The area was once part of “Beringia,” the land bridge that stretched between present-day Asia and North America, allowing dinosaurs to move freely between the two continents. Dinosaurs likely passed through parts of modern-day northern Alaska in their travels back and forth. For a while, this land was thought of as a “dinosaur highway”.

In the 1970s and 1980s, paleontologists found similar species of large dinosaurs in both northern Alaska and southern Alberta. Since the dinosaur fossils were found thousands of miles apart, some scientists thought that the dinosaurs might have migrated south from the Arctic in search of food when the weather became colder.

“People thought big dinosaurs used to migrate when we re-envisioned dinosaurs not as lumbering lizards but these dynamic ancestors of birds,” said Druckenmiller.

But dinosaurs would have had to travel 1,000 miles in order to migrate from northern Alaska to Alberta or Montana, both south of the Arctic Circle. That would be a longer distance than any living vertebrate, or an animal with a backbone, can migrate on land. The current migration record for vertebrates on land is held by caribou, which travel in herds about 400 miles every year.

For these reasons, other scientists believed that large dinosaurs might have lived in the Arctic year-round. But experts say they never thought that smaller dinosaurs like the dromaeosaurs migrated south from the Arctic. Adult dromaeosaurs are only 6- to 8-feet long, and it would be hard for their small bodies to trek thousands of miles without running out of energy.

For 22 years, Fiorillo has traveled from his office at SMU to Alaska, including his field site at Alaska’s Prince Creek Formation.

Fiorillo was in search of fossils to support the theory that dromaeosaurs lived north of the Arctic Circle. He and his team of scientists would assemble inflatable boats and travel up and down the windy Colville River examining the bluffs for fossils.

While searching the cliff face in 2007, Fiorillo’s team found the 14-millimeter dinosaur jawbone with pointy teeth. It is most likely from a young dromaeosaur that was the size of a small puppy, said Fiorillo.

Experts agree that the bone suggests some small meat-eating dinosaurs lived north of the Arctic Circle.

“To have such a young individual from this group of dinosaurs means it is likely that it probably lived somewhere nearby, even, if not exactly at the fossil locality,” said Jack Tseng, a paleontologist at the University of California Berkeley.

But Druckenmiller is skeptical about whether the jaw fragment is from a dromaeosaur. “Those teeth look quite a bit different from the dromaeosaur teeth I’ve seen, and I am not sure about the identity of them,” he said.

Druckenmiller, along with Dr. Jaelyn Eberle, a paleontologist at the University of Colorado Boulder, argues that the jaw fragment doesn’t reveal anything new about the role of Beringia as a home for dromaeosaurs.

At the 2019 Annual Meeting for the Society of Vertebrate Paleontology, Druckenmiller’s team reported in a conference abstract that they found teeth from even smaller dromaeosaurs near the Prince Creek Formation.

Fiorillo says that the baby jaw fragment his team found is the first physical evidence that really indicates dromaeosaurs used the Arctic as a place to live. “When I make that claim,” he said, “I go by what is in the published literature, and conference abstracts are generally not considered part of the published literature because they’re opinion pieces that haven’t gone through peer review.”