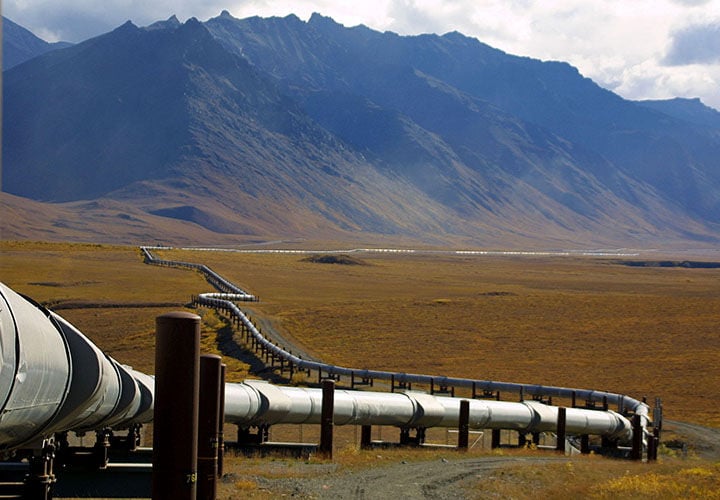 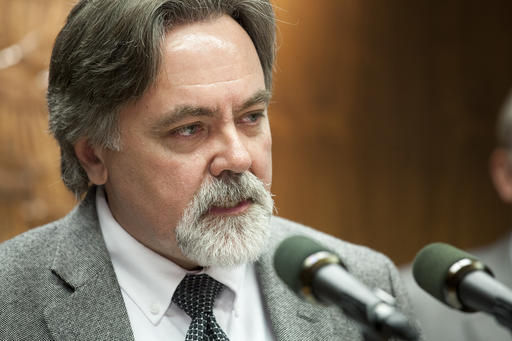 Alaska Department of Revenue Commissioner Randall Hoffbeck talks to reporters about the revenue forecast he released on Monday, March 21, 2016, in Juneau, Alaska. His department projects nearly $300 million less in revenue in the current fiscal year and $600 million next year due to continued low oil prices. (AP Photo/Rashah McChesney)

Alaska Department of Revenue Commissioner Randall Hoffbeck talks to reporters about the revenue forecast he released on Monday, March 21, 2016, in Juneau, Alaska. His department projects nearly $300 million less in revenue in the current fiscal year and $600 million next year due to continued low oil prices. (AP Photo/Rashah McChesney)

The Department of Revenue, under the direction of Gov. Bill Walker, released its spring revenue forecast early and it shows just what the continued slump in oil prices has done to the state's finances.

"Because of a fairly substantial movement in the price of oil since the fall forecast, we thought it was important to get the numbers out early so that they could be part of the debate," Revenue Commissioner Randall Hoffbeck said at a news conference.

The new forecast revises the outlook for oil prices from $50 per barrel of oil in the fall forecast down to about $40. Prices dipped well below that in the early days of the session but have stabilized around $40 per barrel in recent weeks.

Under the lowered expectations, the state expects to bring in just $1.2 billion of unrestricted general fund revenue during the next fiscal year, about a 31 percent drop from the fall forecast.

The operating budget passed by the House envisions spending about $4.1 billion in undesignated general funds. The Senate's plan spends about $4.3 billion.

As for the current fiscal year, the state expects to receive about $300 million less in general fund income than in prior estimates.

The long-term forecast expects oil prices to climb to about $60 by the 2021 fiscal year, but Hoffbeck said there's the chance for unexpected volatility in the price.

That volatility in oil prices was a launching pad for the administration to shift the talk about projected revenue into a renewed push for the Legislature to consider new funding sources.

"The purpose is to underscore the urgency of getting away from the volatility of the price of oil," Walker said.

Walker is pushing for a rework of the Alaska Permanent Fund earnings, which are currently just used to pay for dividends and to inflation proof the Permanent Fund corpus. Walker is also pushing increased and new taxes on such things as alcohol, motor fuel and personal income.

Both Walker and Hoffbeck stressed there wouldn't be a need to trot out the lower-than-expected revenue projections if the state weren't so reliant on oil.

“We have reached a point in our state’s history that we need to be looking beyond oil,” Walker said. “We need to be thinking about what’s the vision of Alaska 20 years from now, 50 years from now. We have that opportunity now, and you’re not going to do it by sitting back with a Ouija board and hoping the price of oil’s going to go to $110, $147. It just isn’t going to work.”

For their part, legislators have been resistant to nearly all forms of taxes. The change to the permanent fund has more traction and has been the subject of many hearings, including one in the Senate Finance Committee on Monday.

Sen. Pete Kelly, a Fairbanks Republican who co-chairs the Senate Finance Committee, said in an interview with the News-Miner on Friday that Walker should stop his push for an income tax and consider getting a permanent fund earnings reserve change a victory.

"He has the opportunity to win and win big if he chooses one battle, fights it and wins it," Kelly said. "If he wants to spread everything out over these multiple little battles, he'll probably lose all of them."

Kelly, as have others, said he can't support a tax when people feel government is too big.

In the House, Rep. Steve Thompson, a Fairbanks Republican who co-chairs the House Finance Committee, said the downturn in the report wasn't altogether surprising.

“It’s not like we went from having a surplus to having a deficit,” he said. “We knew we had a deficit, and this is showing us it’s a little larger than we previously thought.”

Thompson said his committee is preparing to begin reviewing all of the tax and revenue proposals, including the income tax bill, in the next few days.

“If we have to have three meetings a day, we will do that,” he said. “We realize we have a lot of work to do and not a lot of time to do it.”

As for the general sense that the income tax is a non-starter for the Legislature, Thompson said it'll be part of the talks. He added that he hopes the revenue forecast drives home the message to fellow legislators that low oil prices aren't going to change anytime soon.

"We’ve got to do something about new revenues,” he said. "Everything is still on the table."