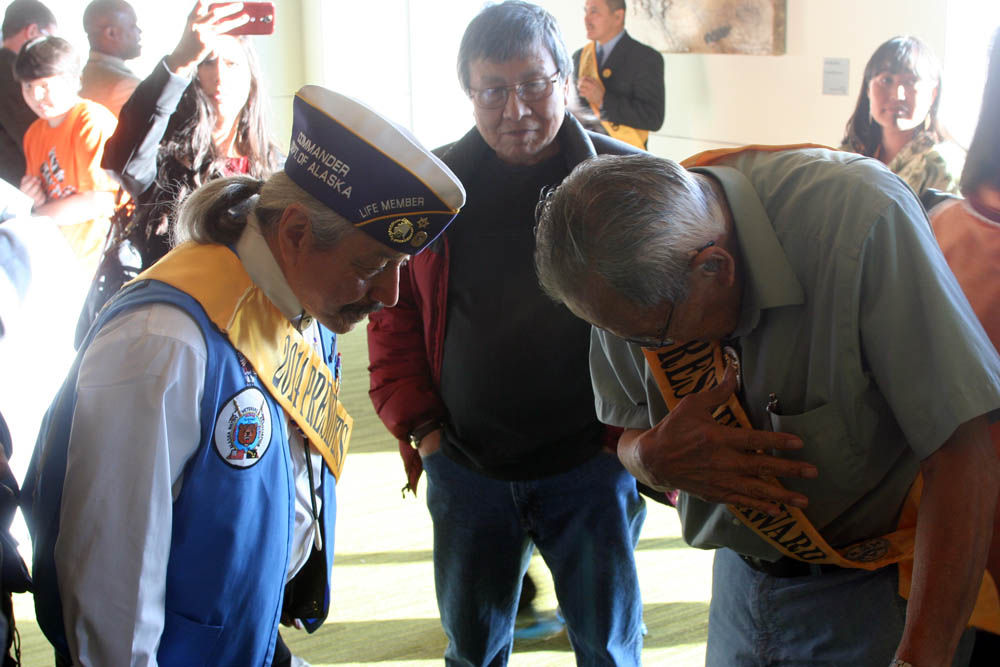 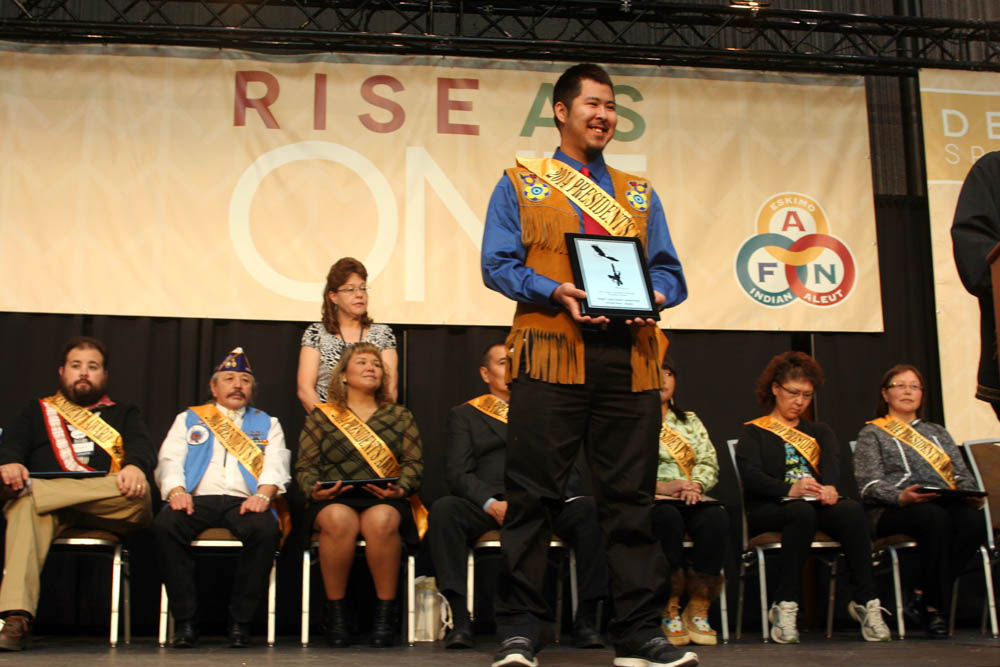 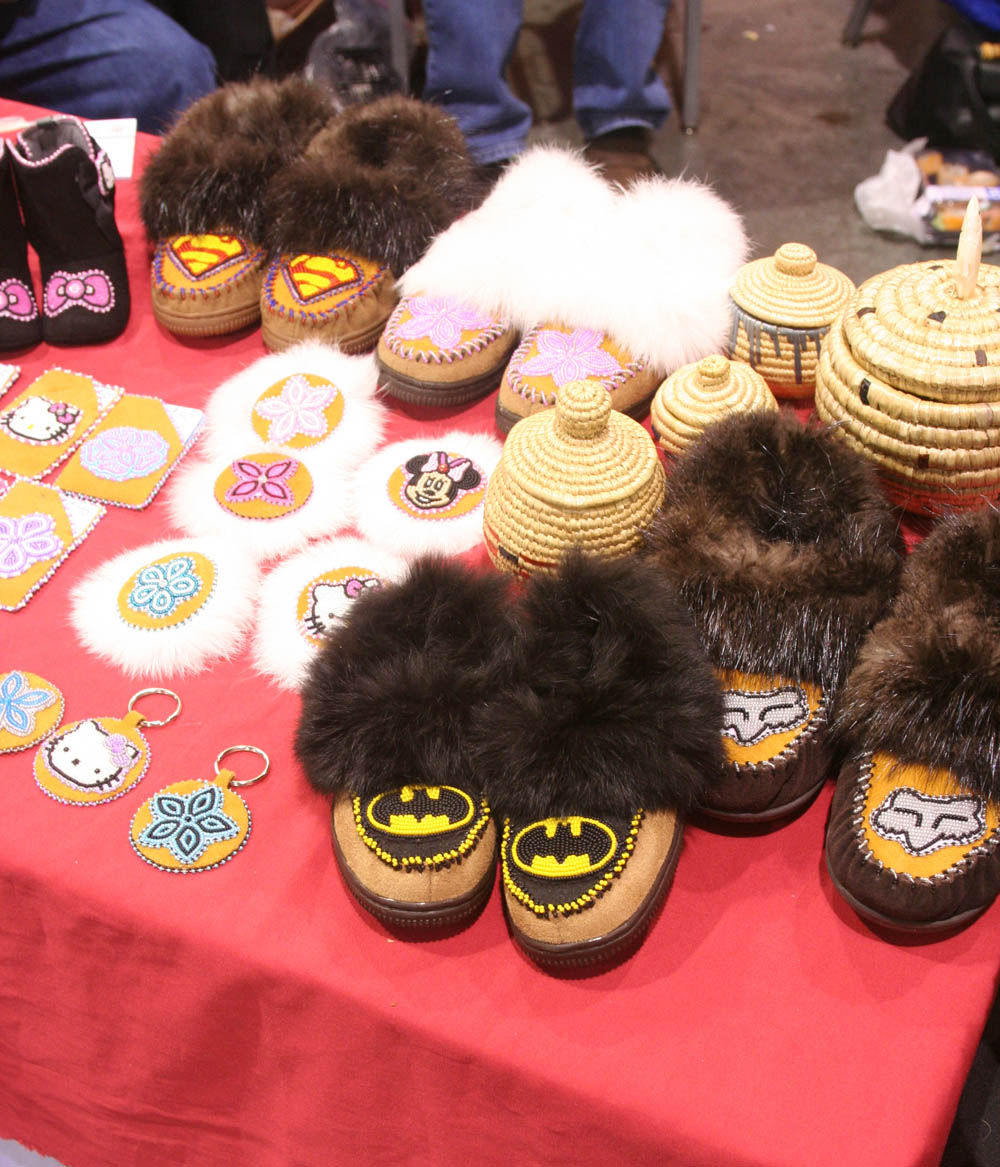 Beadwork by Fairbanks artist Mallory Arkell for sale at the Alaska Federation of Natives convention in Anchorage on Saturday. Casey Grove/cgrove@newsminer.com

Beadwork by Fairbanks artist Mallory Arkell for sale at the Alaska Federation of Natives convention in Anchorage on Saturday. Casey Grove/cgrove@newsminer.com

ANCHORAGE — As the 2014 Alaska Federation of Natives convention wound to a close Saturday, attendees heard from ever-popular Sen. Lisa Murkowski, approved a slew of resolutions and voted in a new co-chair of their board.

The resolutions included an endorsement of Democratic U.S. Sen. Mark Begich, who is seeking to be re-elected Nov. 4, and an endorsement of the so-called “unity” ticket of independent gubernatorial candidate Bill Walker and his running mate, Democrat Byron Mallott. The AFN delegates also approved a resolution in opposition to a ballot measure that would legalize and regulate recreational marijuana in Alaska.

Delegates also voted in new co-chair Jerry Isaac, former president of Fairbanks-based Tanana Chiefs Conference, in a close election that saw Isaac edge out former co-chair Tara Sweeney by a vote of 4,920 to 4,475.

The kuspuk-clad Murkowski is not running for re-election this fall but is often seen as an important voice at the annual convention. In her speech, she, too, advocated against legalizing marijuana, saying it would hurt villagers who had less law enforcement presence in their communities than urban areas have. But Murkowski’s did not voice her support for Begich’s Republican opponent, Dan Sullivan, whom she has endorsed in other public appearances and a television commercial.

Many credit Alaska Native corporation backers in the 2010 election with helping Murkowski overcome a loss in the Republican primary by winning her historic write-in campaign to retain her seat.

“I’m not running, thank goodness!” Murkowski said Saturday before urging the attendees to vote in the coming election. “I’m not going to talk about candidates, because that’ll get me in trouble.”

Asked why she had not expressed support for Sullivan in her speech, Murkowski said most people already knew she backed him. Murkowski said she also respected anyone in the crowd who was voting for Begich.

“I didn’t think, given that this is my speech to AFN as their congressional representative, I didn’t think it should be a campaign speech for Dan Sullivan,” Murkowski said.

Along with her opposition to Ballot Measure 2, Murkowski stressed in her speech the need for a better public safety presence in rural Alaska, as well as for state and federal funding for tribal courts and the need for what she called “culturally sensitive protection” for Native people across the state.

“And we can start by ensuring there is justice for the Fairbanks Four,” Murkowski said, referring to the four Alaska Native men convicted of killing Fairbanks teenager John Hartman in 1997. Many Alaska Natives consider the men wrongly imprisoned.

In the interview later, Murkowski said getting justice for the men — the cases are under state review after recent filings by the Alaska Innocence Project — meant taking a thorough look at the now-17-year-old case.

“I want no stone left unturned, and I think it is an obligation that we have, not only to the Fairbanks Four, but really to ensure that we have belief and a confidence in our justice system,” she said.

The convention soon shifted to the reading, amending and approving of many resolutions. The resolutions included a call for Native self-determination on the management of hunting and fishing, a statement in support of reinstating state funds for the Village Energy Efficiency Program, and a call for better protection of Alaska Native women.

The AFN board then went into executive session, during which the board discussed and voted on endorsements. The session, closed to anyone who was not a delegate, went much longer than the scheduled hour and a half, including lunch, and did not end until after 2 p.m. Dozens of people waited to return to the meeting room.

Back inside, AFN Resolutions Committee Chairman Gregory Razo announced the outcome of the board’s action on the resolutions to endorse Begich for Senate and the Walker-Mallott ticket for governor and lieutenant governor.

“I can report that both resolutions passed,” Razo said.

There was loud applause and whistling. The campaigns applauded, too, in written statements.

Begich campaign spokesman Max Croes noted that the last AFN endorsement, for Lisa Murkowski, was the only such endorsement by the largest group representing Alaska Natives.

“I will continue to work with or stand up to anyone to defend subsistence rights, deliver federal funding for rural Alaska, work to make our communities safer and work to protect Alaska Native rights," Begich said in the statement.

Staff writer Casey Grove is the News-Miner’s Anchorage reporter. Contact him at 907-770-0722 o