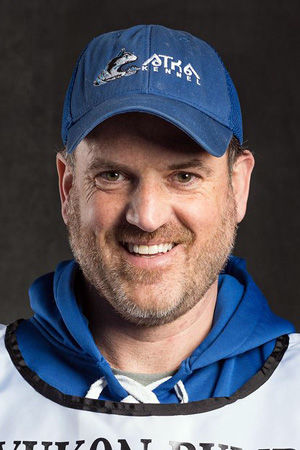 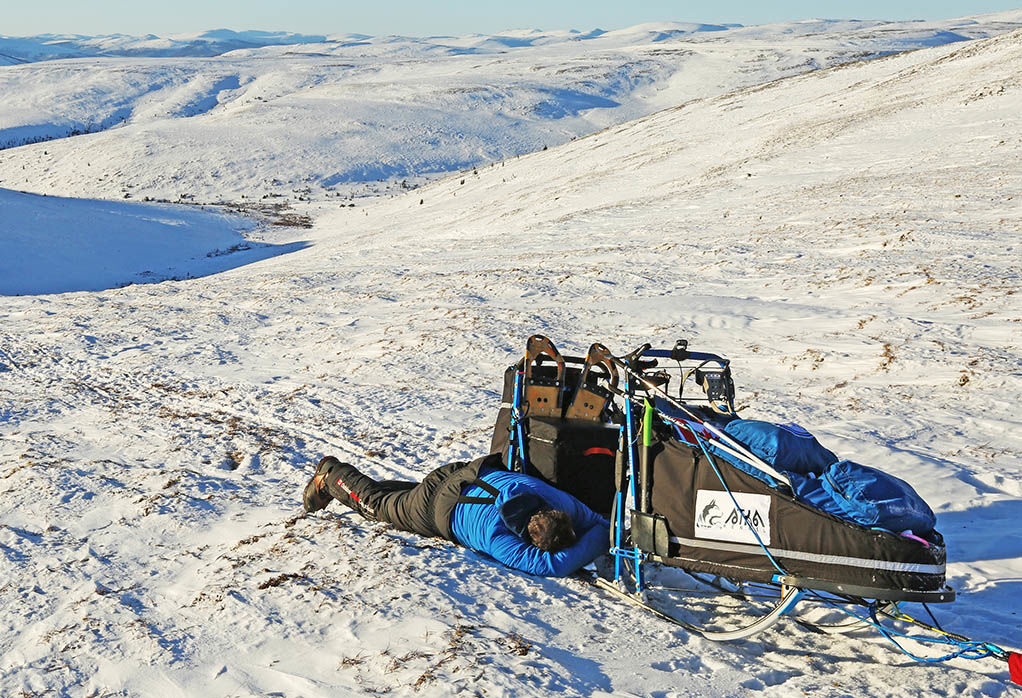 Jason Campeau of Atka Kennel collapses alongside his sled after reaching the top of Eagle Summit. Many Mushers say Rosebud Summit earlier in the race was more challenging. Feb. 04, 2018. Robin Wood/News-Miner 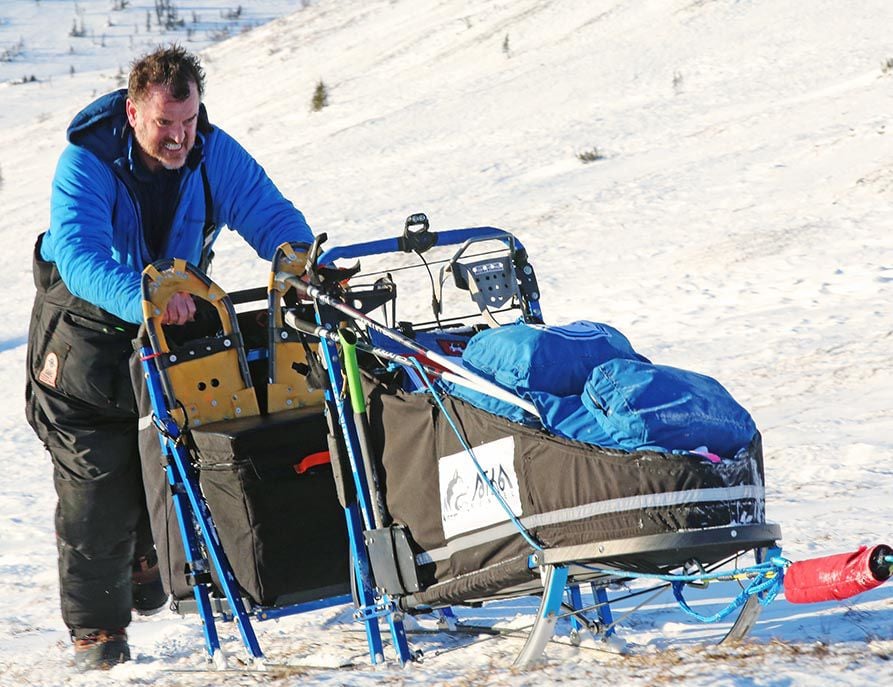 Canadian Jason Campeau grits his teeth nearing the top of Eagle Summit. Many mushers believe tackling the summit in the opposite direction is more difficult, but that doesn’t make the push any easier. Feb. 4, 2018. Robin Wood/News-Miner. 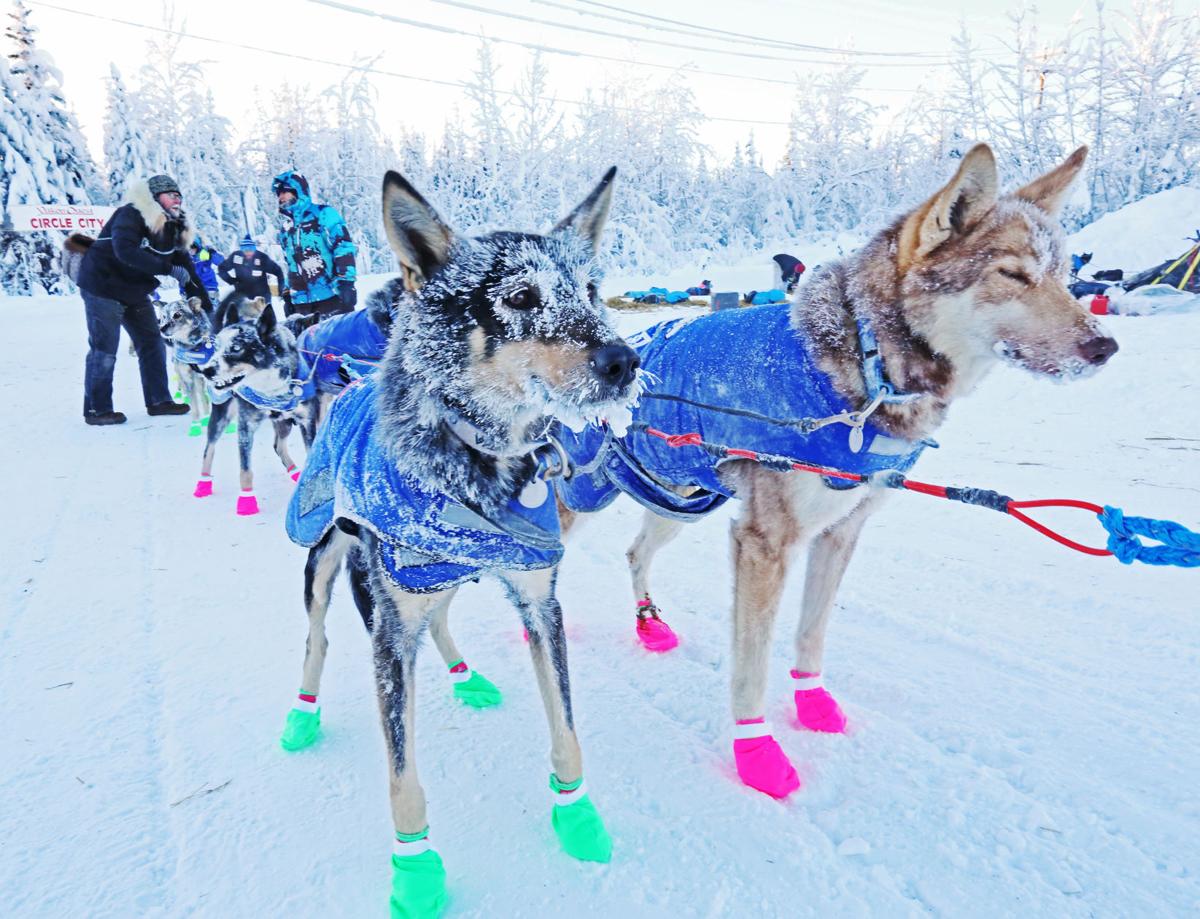 Dogs from Canadian musher Jason Campeau’s team wait while Campeau checks in at Circle City checkpoint. Campeau arrived just before 11 a.m. Monday, and was the 15th musher to make the last checkpoint before hitting the Yukon River. Feb. 5, 2018. Robin Wood/News-Miner. 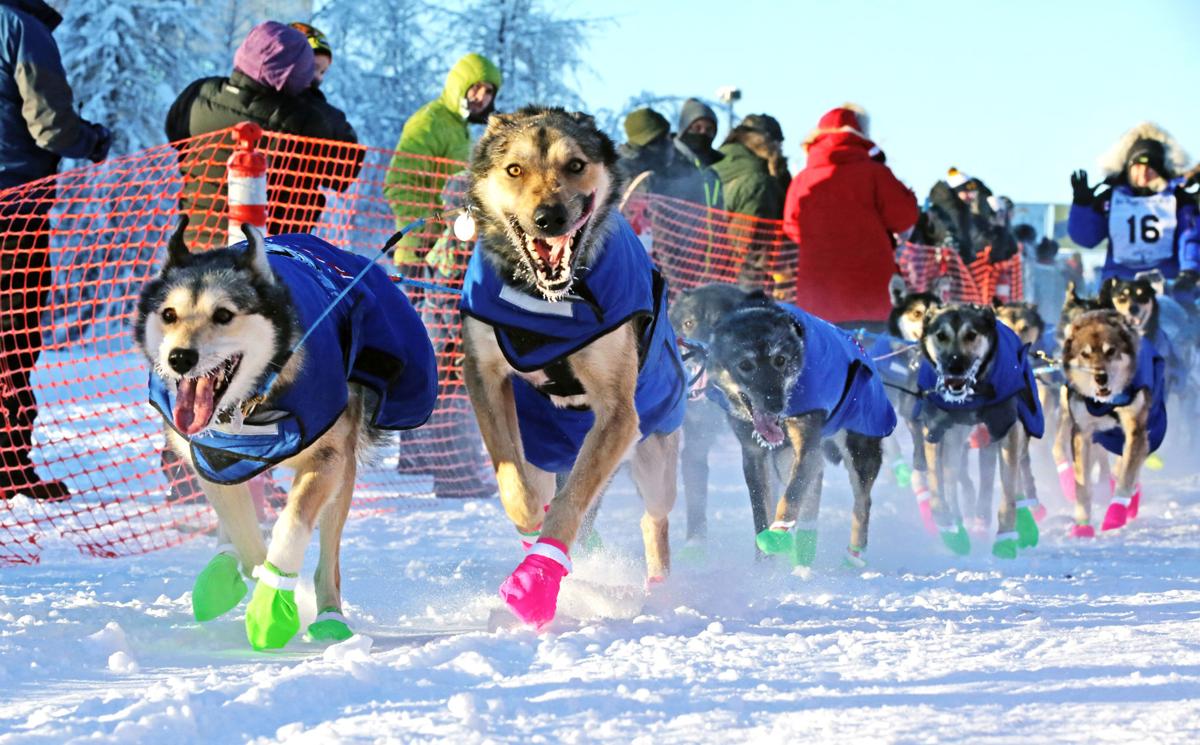 Jason Campeau of Atka Kennel collapses alongside his sled after reaching the top of Eagle Summit. Many Mushers say Rosebud Summit earlier in the race was more challenging. Feb. 04, 2018. Robin Wood/News-Miner

Canadian Jason Campeau grits his teeth nearing the top of Eagle Summit. Many mushers believe tackling the summit in the opposite direction is more difficult, but that doesn’t make the push any easier. Feb. 4, 2018. Robin Wood/News-Miner.

Dogs from Canadian musher Jason Campeau’s team wait while Campeau checks in at Circle City checkpoint. Campeau arrived just before 11 a.m. Monday, and was the 15th musher to make the last checkpoint before hitting the Yukon River. Feb. 5, 2018. Robin Wood/News-Miner.

Campeau, a 43-year-old from Atka Kennel in Rocky Mountain House Alberta, pressed the help button on his race-tracking device at 12:28 p.m. Alaska time Wednesday, according to a Yukon Quest news release.

He was 45 miles outside of the Eagle checkpoint and on his way to Dawson City, the first race checkpoint in Canada.

His brother Jody Campeau said Thursday night after talking to his brother that Jason has yet to walk. He said a CT scan didn’t reveal anything and that his brother was due to undergo more tests.

Jody said the reason his brother signaled for help outside of Eagle was because he suffered a second concussion on the trail.

“We still don’t have all the details on that last concussion — what occurred — but I’m speaking with the Fairbanks Memorial Hospital right now and am waiting on further updates on his concussions,” he said.

The Quest sent out a second news release that Jason Campeau’s wife, Jennifer, scratched from the race. She and her team of 14 dogs arrived in Dawson City safely around 3:30 p.m. Alaska time.

Campeau’s first sign of trouble came on Rosebud Summit, a steep mountain with a 3,640-foot peak about 15 miles outside of the race’s first checkpoint — named Two Rivers — after the teams left the start line in Fairbanks for the 1,000-mile race to Whitehorse, Yukon.

He encountered two-time Quest champion Hugh Neff’s team in a tangle and stopped to offer help.

“In trying to help, his sled ended completely upside down, and Jason went face first into the ice and suffered a concussion,” Jody Campeau said. “He recalled Hugh’s voice waking him up.”

The injury wasn’t going to slow down Jason, who has sustained multiple concussions in a hockey career that included an invite to Toronto Maple Leafs camp, a tenure with the London Knights in England, five years of junior hockey and a national championship at the University of New Brunswick.

It did, however, showcase his toughness to the other Quest competitors.

“Later at (Mile 101) checkpoint, Hugh actually made me laugh,” Jody Campeau said. “He came up to me and went, ‘Your brother … He’s the one that goes head first into the ice and gets up from a concussion and asks me if I’m OK.’ Hugh kind of chuckled at that, like, ‘Take care of yourself, I’m OK.’”

Campeau continued on, making it to the Mile 101 checkpoint on the Steese Highway before attacking Eagle Summit’s 3,685-foot peak en route to Central — the third checkpoint of the race — located 142 miles from the start line.

As he was approaching Eagle Summit’s apex, Campeau collapsed while pushing his team up the mountain. The news shook Jody, who is not only Jason’s brother and handler but also isthe general manager of Atka Kennel.

“When I heard about him passing out on Eagle Summit, too, I started thinking that’s concerning because Jason is in too good of a shape to pass out on the summit,” he said. “I started really worrying.”

This year’s Quest was going to be a launching pad for Atka Kennel, which has 60 dogs and fielded both Jason and Jennifer Campeau’s teams.

Things went awry for Jason once his dogs began to feel sick on Rosebud after he suffered the head injury. He told his brother he didn’t know if he’d be able to continue unless they got better.

“The dogs got sick and it got him off schedule right out of the gates,” Jody said. “He said to me ‘I can’t run my dogs if they’re not eating.’ He took longer, rested and got them eating. Over 24 hours, he got his team back and started competing. I think he moved from 15th place to sixth or seventh. He was going hard.”

With his team’s improved health, Jason powered on. Atka Kennel entered the Quest with a mission.

“The mentality was to go and compete and to do real well and move the entire kennel up for the winter,” Jody said.

Although Jason apparently had sustained a concussion, Jody felt his brother’s experience with the injury was enough to continue racing. He'd had concussions before, so he knew how to manage them.

“Having played pro hockey and suffered multiple concussions, he knows what a concussion is and what the impact and side effects are,” he said. “When he felt the headaches getting worse, that probably was a sign that concerned him.

“But from the time he got his dogs healthy — whether he was hurting from the concussion or not — he stuck to a schedule and it was progressing extremely well.”

After getting over Eagle Summit and arriving in Central, Jason and his team made the 74-mile run to the checkpoint at Circle, a small community up against the Yukon River.

It was apparent his head was hurting as he walked around in a daze in the checkpoint, located at the Circle firehouse. Jody knew something wasn’t right.

But there wasn’t much Jody could do for his younger brother. Handlers aren’t allowed at the next checkpoint, Eagle — the final stop on the Alaska side. The two planned to meet in Dawson City, but Jody worried because Jason told him his head was really hurting.

“He was concerned with his head,” Jody said. “Really concerned.”

A cabin in the woods

He made it to Eagle, rested, then left early Wednesday morning. He made it 45 miles before stopping.

He didn’t move on the Yukon Quest tracker for a couple hours before pressing his help button. Race officials and volunteers at the Eagle checkpoint, which was held at the old school, sprang into action.

Race judge Amy Wright said a group on six snowmachines went out to help within 20 minutes of the call. Jason was on the far side of American Summit's 3,420-foot peak, an approximately two-hour snowmachine trip when the call came in.

The rescuers, who were confirmed to be trailbreakers by Race Marshal Doug Harris, found Jason and brought him and his team of 12 dogs — he dropped two dogs earlier in the race — to a nearby cabin that had no association with the Quest. That is when race officials were first able to communicate with him.

“There were satellite phones there and there was some conversation,” Harris said. “It got better toward the end but it was a little sporadic at the beginning.”

The dogs were taken care of at the cabin.

“There was dog food available and it is my understanding that the dogs were in a heated shed,” Harris said. “They were all stretched out and there were no concerns about the dogs.”

The only question was how to get him it.

Military personnel first tried to approach the cabin in a helicopter Wednesday night, but they struggled to spot the site in the pitch-black conditions. Although some checkpoints are located in secluded locations, the cabin was located in dense woods and had few landmarks around it.

“I think it was a struggle when they originally tried to get in,” Jody said. “It wasn’t a nice, clear checkpoint. It was an isolated cabin.”

The helicopter effort, which Harris said was spearheaded by Alaska State Troopers and military personnel, continued in the morning. They eventually reached the cabin, extracted Jason and began the journey to Fairbanks Memorial Hospital.

While aboard the helicopter, Jason began receiving medical attention.

“The chopper that landed had medical experts,” Jody said. “They found the location and got him out. They were superb.”

Jason’s wife, Jennifer Campeau, was struggling with her own problems on the race. The rookie musher still had all 14 of her dogs, but the cold caused the bulk of her equipment to fail, most notably her headlamps.

She was running at the back of the field, in last place.

With no light, she mostly ran her team during daylight. When she arrived in Eagle early Thursday afternoon, race officials shared the news about her husband. She quickly scratched from the race and decided it would be best to head to Dawson City, where she could meet their two 15-year-old identical twin daughters, Jessica and Mackenzie, and Jason’s parents, Gail and Jean.

Alpine Aviation from Dawson City flew out to Eagle and returned Jennifer — and her full team of 14 dogs — to Dawson City on one of their Cessna 206s.

Jennifer’s handlers worried about the condition of her dogs, and she let them know they were all fine.

Jody believes if it wasn’t for what happened to Jason, Jennifer would have continued on to run the team into Dawson City.

“She feels bad that she scratched with 14 healthy dogs,” he said.

Although no information is avaliable about how Jason sustained the second head injury, Jody thought about the partnership they have representing professional athletes and what they would have done in different circumstances.

“It has me second-guessing myself,” he said. “We represent pro athletes. If this was one of our pro athletes, we wouldn’t have told them to keep going on. But these mushers are a special breed.”

Jody said his brother’s injury showcased what the Yukon Quest is all about.

“I hear mushers like Rob Cooke, Hugh Neff and Allen Moore talk about the Yukon Quest family,” he said as he sat in the lobby at the Downtown Hotel. “They have been tremendous. That family has really welcomed my family into their family. From the vets, to the race judges, the marshal ... Everyone is genuinely concerned.

“We’re out there to compete and win a race, but this is truly a family. Everyone has been great to us.”