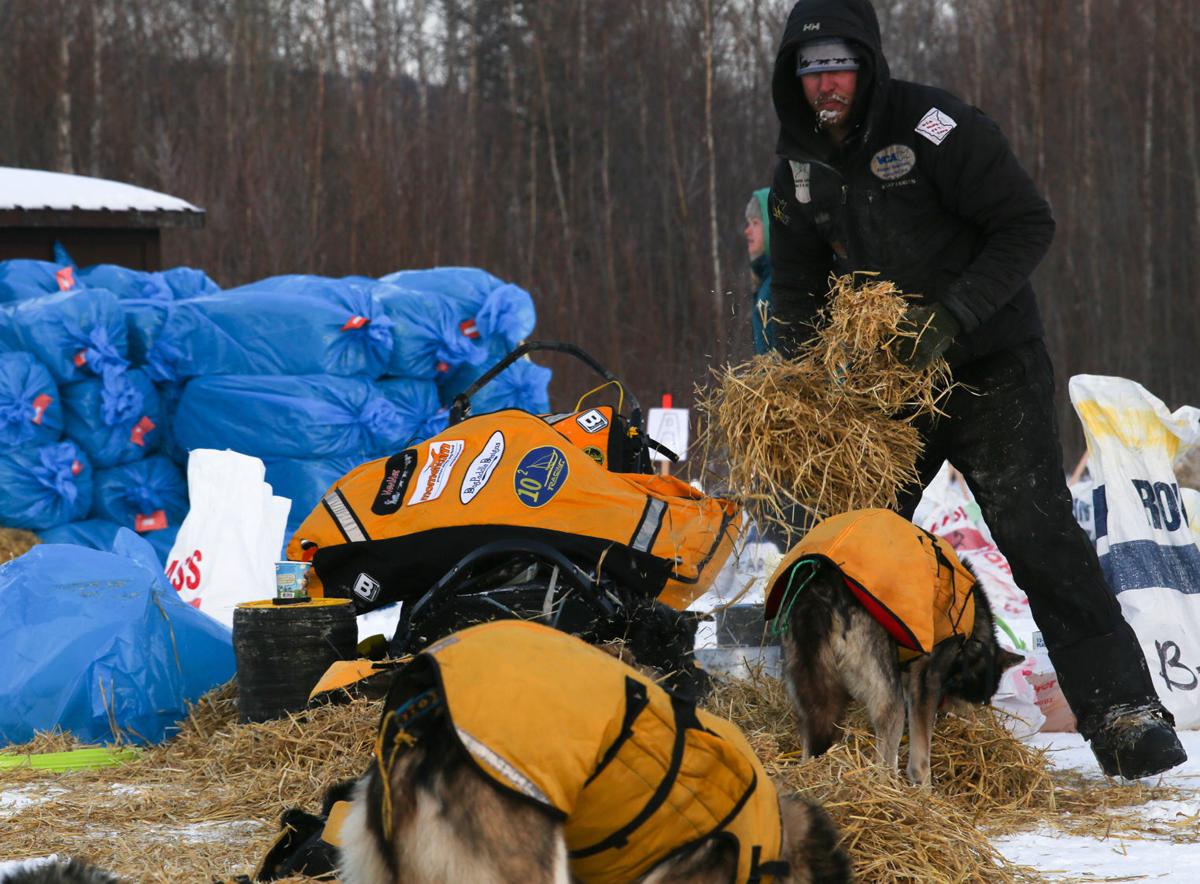 Iditarod veteran Brent Sass, of Eureka, Alaska, beds his dogs in the dog yard outside the community center on Tuesday, March 10, 2015 in Tanana, Alaska. Sass was disqualified in Tanana on Tuesday for taking an iPod touch, a wireless communication device, on the trail.

Iditarod veteran Brent Sass, of Eureka, Alaska, beds his dogs in the dog yard outside the community center on Tuesday, March 10, 2015 in Tanana, Alaska. Sass was disqualified in Tanana on Tuesday for taking an iPod touch, a wireless communication device, on the trail.

The device, according to Sass, was an iPod Touch that had wireless Internet capability.

Sass, in an interview posted on the official Iditarod website, said officials had made it clear at the beginning of the race that devices capable of two-way communication were prohibited.

"It was a complete screw-up on my part,” Sass said in the Iditarod’s interview. “I bring it along for my music and my movies and I had no intention of using the Wi-Fi."

"It just didn't register that the Wi-Fi in the iPod Touch could be hooked into Wi-Fi at checkpoints and used to communicate," he said.

"I have to accept the consequences. I want to apologize to my fellow mushers, my fans, my supporters, my family, my friends, my dogs," a choked up Sass said in the interview.

Nordman, in an interview with the News-Miner in Tanana, described Sass as a well-respected musher with a great fan base. He said Sass was devastated and emotional when told he had broken the rule. Sass had been seen using the iPod Touch.

“It’s a very simple mistake that he made,” Nordman said in Tanana. “There were reports. There were no mushers pointing anything out. But we saw him with this piece of hardware.”

Nordman said Sass was notified of the disqualification about 6:40 p.m.

“He went, ‘Oh my god, what a mistake.’ You know, an emotional time for him,” Nordman said. “Just a mistake. Do I believe Brent was trying to gain a competitive advantage in the race? Absolutely not. That’s my personal opinion.”

Nordman said Sass was respectful upon being informed of the disqualification.

“He felt like he’d let his competitors down, his supporters and also was saying, ‘I’m so sorry, Mark,’ that type of thing. It was just one of those things that slipped through the cracks, but it was very clearly stated in our drivers’ meeting. It’s just too bad it happened. It’s a shame.”

Sass has gained stature in long-distance mushing in recent years. His successful trail battle with two-time reigning champion Allen Moore in this year’s Yukon Quest entertained fans to the end.

Sass was in position to win the 2014 Quest, just a couple hours behind Moore before the final checkpoint at Braeburn, when he fell asleep and tumbled off his sled. He sustained a concussion in the fall and could not continue. The injury forced him to withdraw from the Iditarod that year, too.

Tuesday’s disqualification put a quick end to any hope that Sass would become just the second musher to win both the Quest and Iditarod in the same year. Lance Mackey completed that feat twice.

Sass, in the Iditarod interview, noted that Yukon Quest rules permitted use of the iPod, which he said he also used as his trail alarm clock

Sass said he knew of the Iditarod's rule barring mushers from having communications devices.

"I handed my cellphone to my dad before the race, going 'I can't use this thing,' here, dad, take it,'" he said.

Staff writer Casey Grove is the News-Miner’s Anchorage reporter and is covering the Iditarod this year. Follow him on Twitter: @kcgrove.