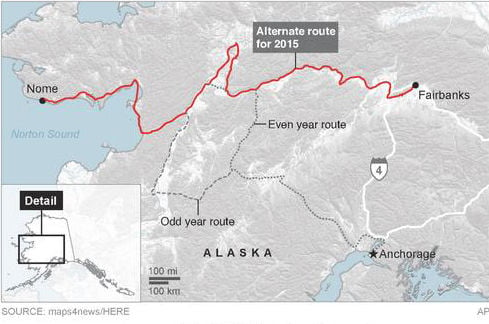 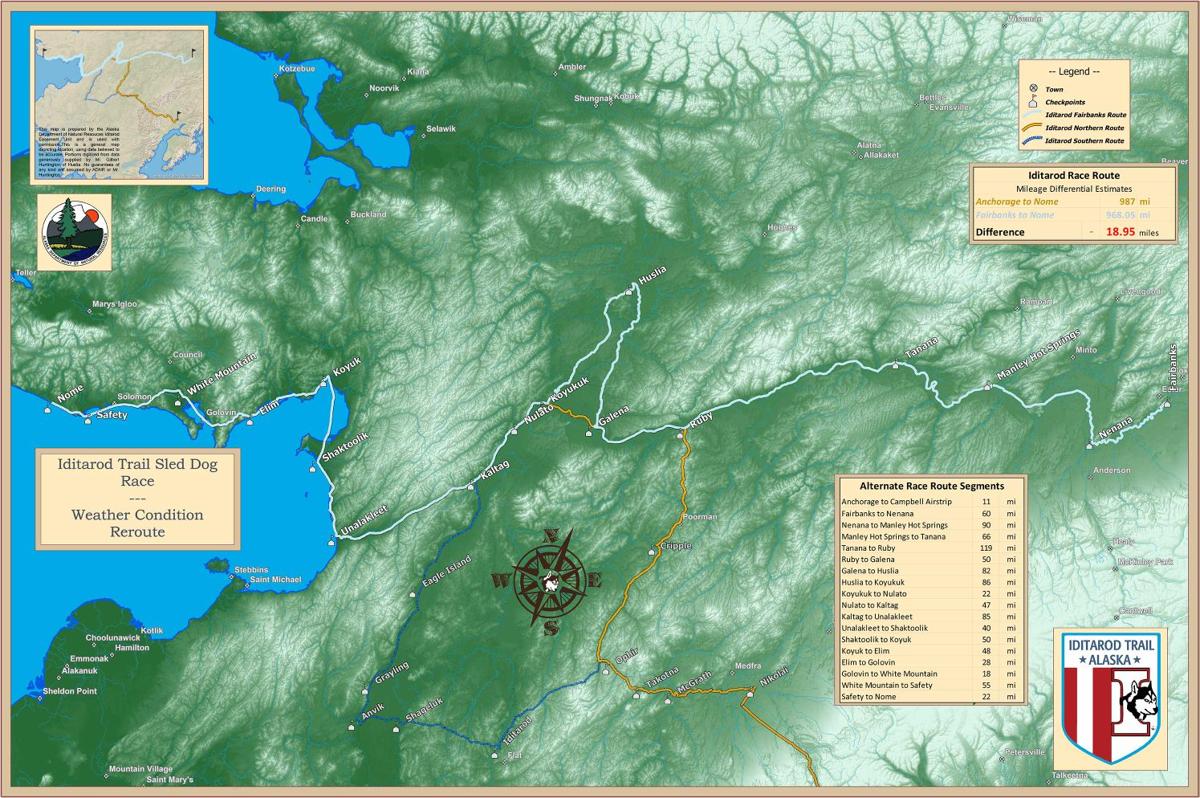 Map courtesy of the Alaska Department of Natural Resources

Map courtesy of the Alaska Department of Natural Resources

Fairbanks: Iditarod racers will start in Fairbanks for the third time in the race’s history this year. Fairbanks also hosted the Iditarod restart in 2003 and 2015. The city has years of experience with long-distance mushing, alternating as either the start or finish of the 1,000-mile Yukon Quest International Sled Dog Race. Whitehorse, in Canada’s Yukon, is the other terminus of the Quest.Fairbanks also hosts the Open North American Championships, one of two world-class sprint mushing races in Alaska, each March.The starting line for the 2017 Iditarod will be near Fairbanks International Airport, on Hoselton Road. Racers will run down the snow-covered roadway before hopping onto the Chena River at the Pike’s Landing boat launch for several more miles. They’ll reach the Tanana River soon after and be on their way to Nome, first passing through some Interior community checkpoints before rejoining the usual Iditarod race trail.

Nenana: Nenana will serve as the first checkpoint on the 2017 Iditarod, its third time as a checkpoint. The community is one of only three Iditarod checkpoints on the Alaska road system. Just one hour from Fairbanks via the Parks Highway, Nenana is home to about 400 people. The community is known in large part for the annual Ice Classic, in which people buy tickets to guess — down to the minute — the moment the ice will go out on the Tanana River at Nenana, knocking down a tripod erected each year for the event. The community holds its Tripod Days festival each March. Nenana has a long history with mushing and actually served as the start of the life-saving diphtheria serum delivery, by a relay of dog teams, to Nome in 1925.

Manley: Manley will serve as the second checkpoint on this year’s Iditarod. It is located about 150 river miles and about 160 road miles from Fairbanks. Manley sits on the Tanana River at the terminus of the Elliott Highway. The community was settled in large part for its hot springs and was named Baker’s Hot Springs for 50 years. Manley Hot Springs was homesteaded by John Karshner in 1902 and in the 1950s was renamed after miner Frank Manley, who built the spacious Hot Springs Resort Hotel in 1907. At one point early on, the thriving village of Manley was home to an estimated 500 residents, but the burning of the resort and a drop off in mining contributed to its rapid decline. Its resurgence came in the late 1950s when it was connected to the highway system and received a new school.

Tanana: The village of Tanana lies at the confluence of two of Alaska’s mightiest rivers: the Tanana and the Yukon. The village now known as Tanana was previously known to Alaska Natives as Nucklakayette or Nuklukayet — the meeting of the two rivers. Long before European contact, Tanana served as a gathering place and trading settlement for Athabaskans throughout Interior Alaska. Each summer, the village hosts the celebration of Nuchalawoyya, in which it welcomes to town people from up and down the Yukon and Tanana rivers to share stories, food and culture. Starting in 1881, a mission was constructed and was soon followed by a school and hospital complex. Tanana once hosted Fort Gibbon, which maintained the telegraph line between Fairbanks and Nome, and was home to an airstrip and refueling station during World War II.

Ruby: The village of Ruby, located 335 river miles from Fairbanks, will be the first stop on the 2015 Iditarod that will be familiar to mushers. Ruby usually serves as the 11th checkpoint on the Iditarod’s northern route, where the route connects with the Yukon. This year, however, with the changes to the route, Ruby will serve as the fourth checkpoint and the second checkpoint on the Yukon. The village has a population of 186. Gold discoveries in 1907 and 1911 led to huge population spikes in the area, at one point serving as home for more than 1,000 miners. By the 1940s, however, most of the miners had left the village, and the community had been reduced to a population of about 140.

Galena: With a population of about 450 and a large boarding school residency on top of that, Galena is one of the biggest checkpoints between the start and finish of the 2015 Iditarod. A regional Koyukon Athabaskan hub, Galena is home to a regional medical clinic. The school is housed at a former Air Force location. For the past several years the community has been in a process of rebuilding, after intense flooding during breakup devastated the village in the spring of 2013. Galena derives its name from the chemical name of the lead sulfate ore found in the area. It was home to Edgar Nollner, the last living musher to participate in the original diphtheria serum run of 1925. Nollner died in 1999. Nollner is far from the only notable musher to call Galena home, however. Even the village’s mayor, Jon Korta, is a multiple-time Iditarod finisher.

Huslia: Huslia marks the halfway point of the 2015 Iditarod. The northernmost checkpoint on the Iditarod, it is located on the Koyukuk River about 86 miles upstream from its confluence with the Yukon. This will be Huslia’s second year serving as a checkpoint for the Iditarod. When the race started in Fairbanks in 2003, the route included a stretch where mushers doubled back on the river to gain extra miles, but this year trail planners elected to extend the race north overland from Galena to Huslia before having racers wind down the Koyukuk back to the Yukon. The village was home to one of Alaska’s most iconic mushing legends, George Attla, who died in February 2015, less than a month before the world’s most well-known sled dog race was planned to visit his hometown. Attla was the most-decorated sprint racer in Alaska history. He raced in the first Iditarod in 1973, finishing fourth. The flow of the Koyukuk has drifted significantly in recent years, threatening villages on its banks with serious erosion. In the summer of 2014, Huslia residents had to abandon or relocate several homes that were threatened by riverbank erosion.

Koyukuk: The village of Koyukuk, with a population of just under 100, lies right at the point the Koyukuk River is engulfed by the Yukon. For years, the area where the village now stands was used by Koyukon Athabascans as a frequent camp and trading post. A telegraph station was established around 1867, a trading post around 1880, and a gold rush struck between 1884-85. Measles and food shortages reduced the traditional Alaska Native population by about one-third in 1900. Its location at the confluence of the two natural highways made it a convenient meeting location. This will be Koyukuk’s second year as an Iditarod checkpoint. As with Huslia, Koyukuk was added to the checkpoint list to remove the need for an area of back-tracking for mushers. In odd years, when the northern route is used for the Iditarod, as would have been the case this year, mushers pass by Koyukuk on their way to the checkpoint in Nulato.

Nulato: The distance to Nulato from the previous checkpoint is one of the shortest links of the 2017 Iditarod. At 22 miles, the Koyukuk-to-Nulato stretch is only longer than the 18-mile stretch from Golovin to White Mountain at the tail end of the race. Nulato’s origin is a troubled one — starting out as a Russian trading post in the mid-1800s, the community was burned to the ground on two separate occasions by local Koyukon Alaska Natives.

Kaltag: The community of Kaltag is in Koyukon Athabascan territory and historically has been used as a cemetery for surrounding villages. Relatives of recently deceased hold the weeklong Stick Dance Festival in Kaltag to thank those who helped during times of mourning. In 1839 smallpox struck the Koyukon, the first of multiple epidemics. On the west bank of the Yukon River, Kaltag is situated on a 35-foot bluff at the base of the Nulato Hills and offers mushers a brief respite from driving winds. Infrastructure arrived in the village as early as 1867 with a military telegraph line. Kaltag was officially established after the food shortage and measles epidemic of 1900 when villagers from three nearby camps moved to the area to regroup. Kaltag is the home of the late Virginia Kalland, widow of Edgar Kalland, who was one of the original mushers who helped carry diphtheria serum along the trail 90 years ago.

Unalakleet: Just north of the Unalakleet River delta on Norton Sound, Unalakleet is one of the largest communities on the Iditarod trail. Unalakleet, which means “from the southern side,” has long been an important trading hub as the terminus for the Kaltag Portage. House remnants from along the beach have been dated around A.D. 200. From Unalakleet, mushers have 221 miles to Nome and can expect sudden storms and ample wind as they enter the gateway to the Bering Sea.

Shaktoolik: Iditarod officials describe trails surrounding Shaktoolik as some of the windiest stretches in the race. Shortly after leaving Shaktoolik, mushers must travel onto the ice of Norton Bay, a treacherous section of trail. Shaktoolik became an occupied settlement as early as 1839, and the village was home to reindeer herds around 1905. Originally six miles up the Shaktoolik river, the village was moved to the mouth of the river in 1933. But severe storms forced the village to move to its current location in 1967. Shaktoolik is 50 miles from the next stop on the trail.

Koyuk: The checkpoint of Koyuk, at the mouth of the Koyuk River, marks an important turning point for mushers — the remaining trail travels only on land. The nearby site of lyatayet on Cape Denbigh has traces of human habitation dating back 6,000 to 8,000 years. Historically, villagers were nomadic. A Western Union telegraph expedition in 1865 noted the village of Konyukmute. The present town site began to be populated around 1900, and two boom towns popped up in the region around 1914. A church hosted the first school in 1915. In the early 20th century coal was mined near Koyuk to supply steamships and for export to Nome.

Elim: When racers reach the checkpoint of Elim, they have less than 100 miles to travel. Elim is located on the northwest shore of Norton Bay. From Elim — formerly the Malemiut Inupiat Eskimo village of Nuviakchak — racers travel 95 miles over the hills of the Kwiktalik Mountains toward Golovin Bay.

White Mountain: White Mountain is 55 miles from the final checkpoint of Safety. Located on the west bank of the Fish River and near the Niukluk River, the village at one point was the Inupiat fish camp of Nutchirviq. White Mountain was one of many communities to grow during the gold rush of 1900. A government-subsidized orphanage opened and was converted into a school in 1926. A post office followed in 1932.

Safety: Safety is 22 miles from Nome on the coast of the Bering Sea and is the final checkpoint before the finish line. After Safety, mushers mostly race on the beach to their ultimate destination. Nobody lives at the coastal checkpoint.

Nome: Nome, located roughly 1,000 trail miles from Fairbanks, tantalizes mushers for days as they ride mile after mile to reach their destination. Not all of them will make it, but those who do are treated each year to a warm and enthusiastic reception as they cross under the Burled Arch that is the finish line. Known for its history of gold prospecting on the Seward Peninsula, Nome was once home to 30,000 gold seekers. Now about 3,600 people live in the city. The city serves as the main hub for the southern Seward Peninsula and northern Norton Sound region.