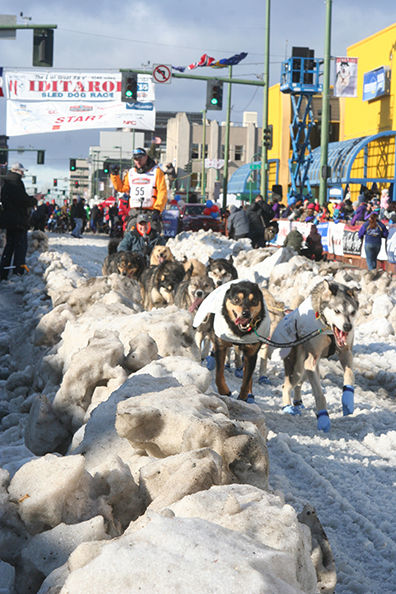 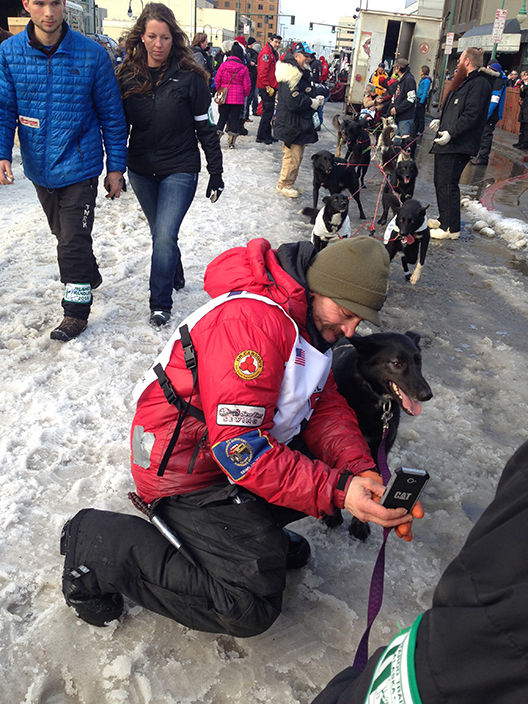 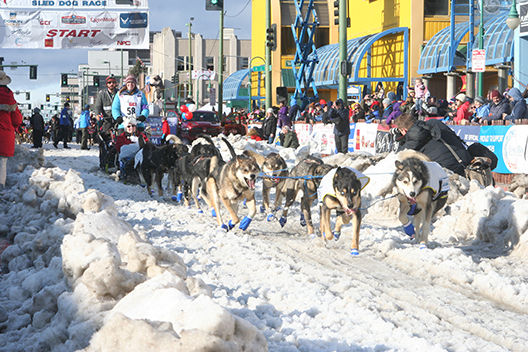 Fairbanks musher Paige Drobny and her team head down Fourth Avenue during the ceremonial start of the 2015 Iditarod Trail Sled Dog Race in downtown Anchorage on Saturday, March 7, 2015. Casey Grove/News-Miner 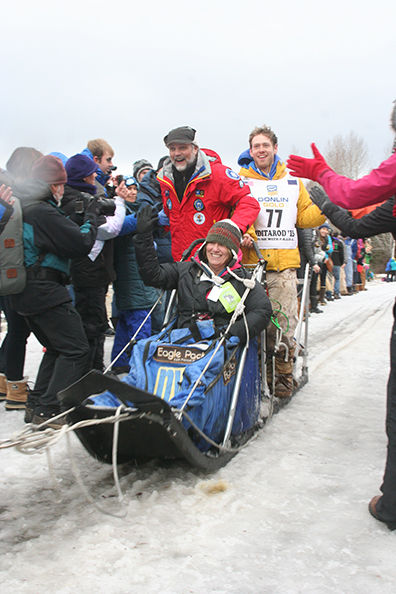 Alan Stevens takes people on a ride during the ceremonial start of the 2015 Iditarod Trail Sled Dog Race in downtown Anchorage on Saturday, March 7, 2015. Casey Grove/News-Miner

Fairbanks musher Paige Drobny and her team head down Fourth Avenue during the ceremonial start of the 2015 Iditarod Trail Sled Dog Race in downtown Anchorage on Saturday, March 7, 2015. Casey Grove/News-Miner

Alan Stevens takes people on a ride during the ceremonial start of the 2015 Iditarod Trail Sled Dog Race in downtown Anchorage on Saturday, March 7, 2015. Casey Grove/News-Miner

ANCHORAGE — The ceremonial start of the 2015 Iditarod Trail Sled Dog Race kicked off with the usual festive mood but some unusual conditions: nearly bare pavement in downtown Anchorage and a Saturday morning drizzle that turned to sunny skies.

Seventy-eight mushers and their teams took an 11-mile jaunt through the city Saturday in the biggest single annual event in Alaska’s largest city, starting downtown and winding through Anchorage’s trails to Campbell Airstrip. The official race clock starts in Fairbanks, a move from the usual restart of Willow because of low snow, on the Chena River on Monday.

The Anchorage event always has been a way to showcase the Last Great Race for a larger audience, those who cannot watch along the rugged 1,000-mile trail, and the fans came out in droves. Downtown, they crowded the streets as a TV station’s helicopter buzzed overhead. In Midtown, fans stood alongside the trail in puddles to see each musher whizz past, a large group of whom partied with a DJ while wearing rubber boots.

Women, and some men clad in Hawaiian shirts, danced.

“The friendliest people on Earth are from Alaska,” said Pam Trice, from Montgomery, Texas, in the state for the first time just for the Iditarod. “People walk up to us. We’re just making friends.”

The race fans could not have been more friendly to Two Rivers musher Aliy Zirkle, who has finished second the last three years in a row. Supporters crowded her dog truck on Fourth Avenue, holding signs for Zirkle, who took time to pose with the fans in pictures.

Not since Susan Butcher in 1990 has a woman won the Iditarod, and Zirkle, quietly, has aimed for years to change that.

“I’m going to give it my best shot,” Zirkle said, talking over a barking sled dog. “People are generally very loud — very loud! — most of all Alaska turns out. … It’s a celebration of true arctic transportation. And we still have snow.”

Subzero temperatures and snow are in the forecast for Fairbanks, and Zirkle said she was excited to mush close to home in the race.

Snow has fallen in Fairbanks since the Anchorage ceremonial start, and the National Weather Service has forecast a high of 10 degrees for the Monday restart in Fairbanks, with a possible low of 20 below that night.

Zirkle’s husband, fellow Iditarod musher Allen Moore, gave over his 11 finishers from the SP Kennels’ second place Yukon Quest team to round out what is now his wife’s more competitive Iditarod team.

“You get all wound up, hearing these dogs and watching them run,” Moore said in his unmistakable Arkansas drawl.

“It’s fantastic,” he said, asked about the support his wife was getting. “I think it’s what the sport needs. I hope she wins!”

In between visits to different dog trucks to greet mushers, Sen. Lisa Murkowski said it was about time a woman won the Iditarod again. The U.S. Senate, which has far fewer women than there are female Iditarod mushers, could learn a lot from the Iditarod, Murkowski said.

“I think she’s looking at this with an eye to win,” Murkowski said, referring to Zirke. “Not that she doesn’t always, but she’s up there.”

Like Moore, Fairbanks musher Lance Mackey, a four-time winner who has not been in the top 10 since 2010, is running a younger team of dogs with eyes toward future top finishes. Mackey stood with fans for photos Saturday, but he also took some advice from his father, Dick Mackey, who placed in the top 10 from 1973 to 1977 and won — by 1 second — in 1978.

Retired from racing, the elder Mackey had only a few words for his son.

Lance Mackey, jokingly, said he was nervous. Then he recanted.

“Hell no, I’m not nervous. This is fairly familiar,” he said. “I have no expectations, no predictions, but to have a good time and to give these fans the show they came to see.”

The United Way of the Tanana Valley is