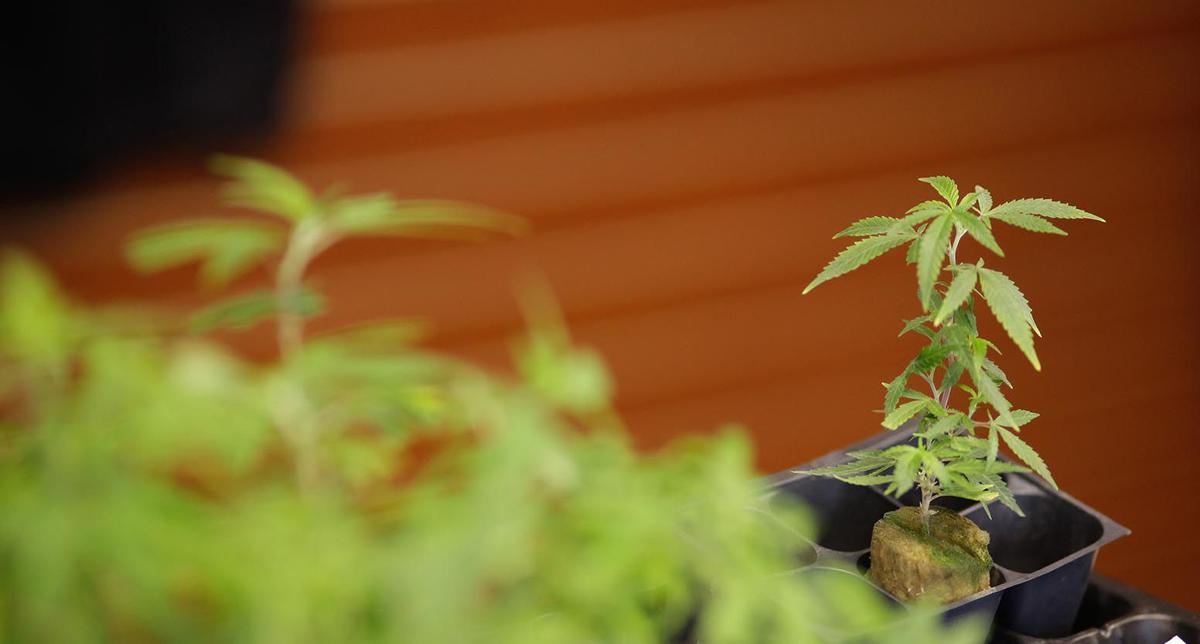 Matt Buxton photo A clone of Princess Vortex, a Sativa strain, is for sale at Arctic Herbery on March 29, 2019. 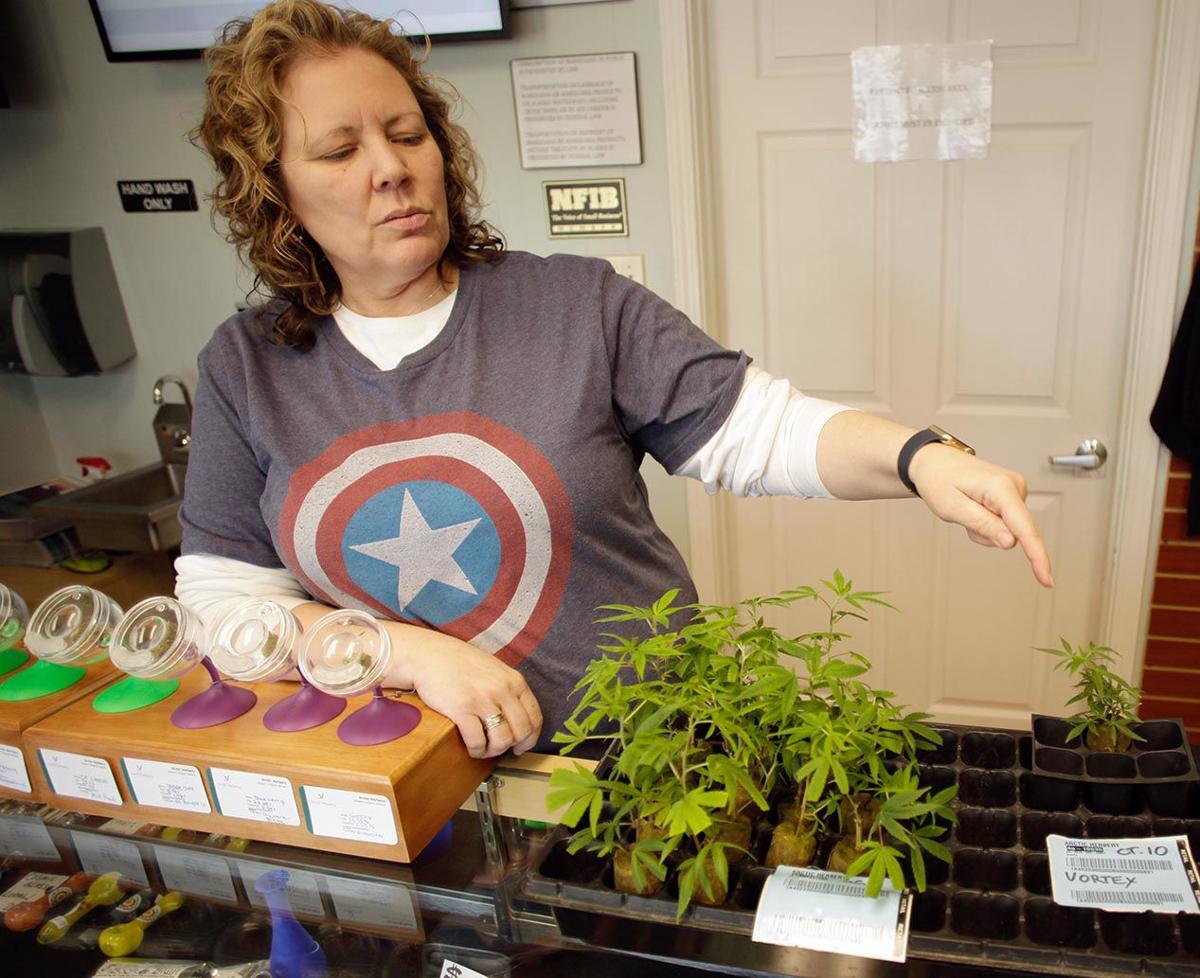 Matt Buxton photo Kim Thorp, the general manager of Arctic Herbery, explains the basics of growing marijuana from a clone on March 29, 2019. 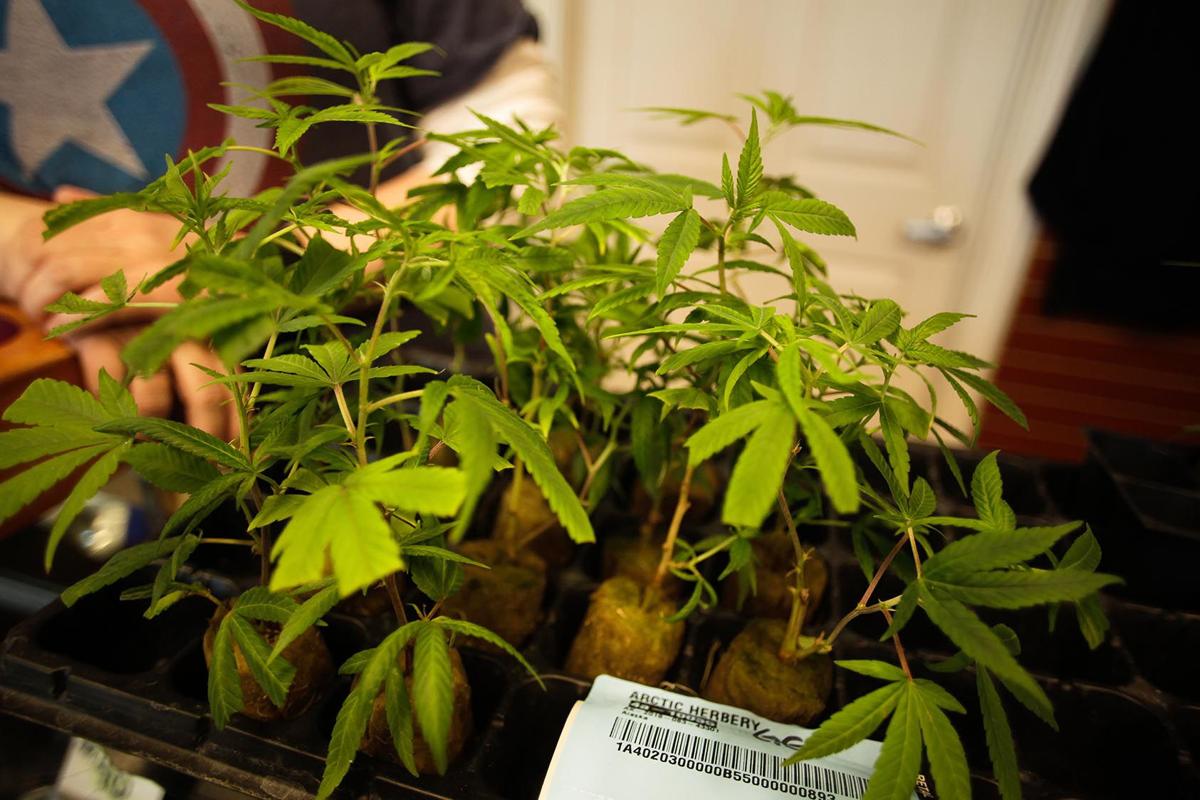 Matt Buxton photo A group of Golden Goat clones are for sale at Arctic Herbery on March 29, 2019. 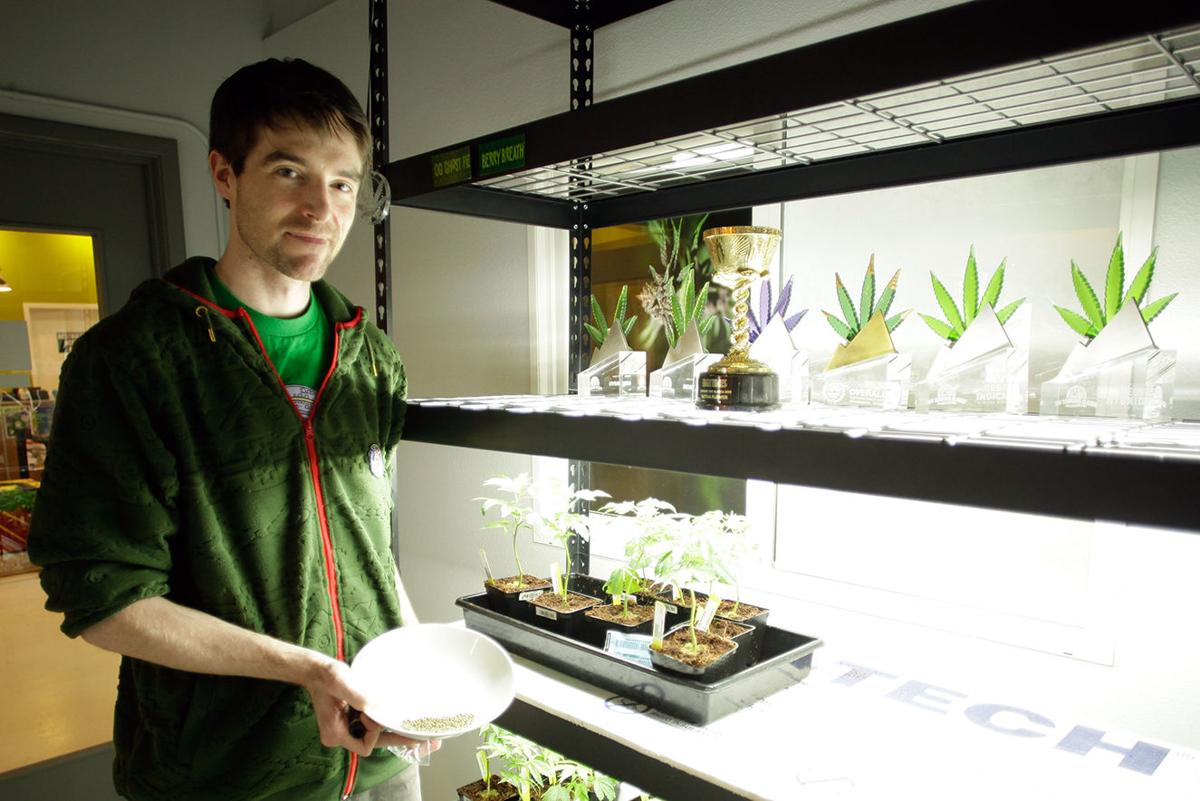 As the Alaska winter wanes and the warmer weather returns, thoughts turn to gardening. And maybe this year you want to think about growing your own cannabis. Whether you’ve been gardening for as long as you can remember or you’re just interested in trying your hand at raising some cannabis outdoors, experts are here to jumpstart your legal homegrow operation.

The first, and probably most important, step in starting your grow is knowing Alaska law on what you can and can’t do. There is a limit on how much you can grow — six plants per person over 21 and no more than 12 per household regardless of the number of over-21 people in the household.

The second most important thing is determining what kind of cannabis you want. Maybe you’re looking for the relaxation of an indica strain, or perhaps you want the buzz sativa brings with it — or maybe you just want to grow something for fun.

“A person really needs to know what they like to smoke and what kind of a buzz they’re looking for before they go start seeds,” said Linden Anson, one of the co-owners of Alaskan Blooms, a Fairbanks cultivator. “You might have super-high anxiety and then you go start a sativa and you can’t enjoy what you’ve grown. Enjoying it is enjoying the fruits of your labor.”

Some things to consider: the many different flavors of cannabis, what THC content a strain has, how much time you want to wait for the finished product, and how much you want to spend.

Growing outdoors is significantly cheaper than growing indoors. With an indoor grow, there’s the cost of equipment such as lighting and ventilation systems and also an increased electricity bill. Outdoor grows, in contrast, can require as little as a patch or pot of soil, some fertilizer and your choice of seed or clone. The carbon footprint of growing indoors is much higher than growing outdoors.

“The carbon footprint for the cannabis industry is probably the highest of any horticultural crop. It’s astronomical,” said Mike Emers, who owns Rosie Creek Farm  in Fairbanks. “I forget how many tons of carbon it takes to produce a pound of marijuana, but it’s a lot. I’m talking about in tons to pounds.”

To shed some light on just how high the carbon footprint for indoor cannabis production can get, listen to Evan Mills, a climate change and energy scientist in California. He says the amount of energy used to power marijuana farms is enough to power 2 million homes and produces emissions equating to 3 million U.S. cars per year.

That fits with Emers’ thinking. “If you want to be more environmentally conscious, you grow plants outdoor in your garden,” he said.

Once you’ve decided what to grow and when to grow it, the next choice you need to make is whether you’re going to plant clones or seeds.

Clones are cuttings from an existing marijuana plant that carry the original plant’s genetics and will be identical to the finished plant. The longer you leave the plant in its vegetative stage, the bigger it will get. Between the vegetative state and the flowering state it will double in size.

To start the flowering cycle, however, you need to expose the plant to 12 hours of light and 12 hours of dark per the plant’s “photo period” — difficult during Alaskan summers.

“If someone is growing a ‘photo period’ plant, they must be able to give it a dark cycle for 12 hours minimum a day in order to initiate flowering,” said Evan Schlossberg, managing partner at The Frost Farms in Anchorage. “So they can either put it into a warehouse and roll it back out or put it inside the house in the dark in a closet and then bring it back into the sunshine later in the day.”

Once you’ve gotten your clones into the flowering cycle, it takes eight to nine weeks to grow a mature flower. Since frost hits different parts of Alaska at different times, when you should start planting your plants outside varies. Growers in Fairbanks can usually begin to put their seedlings in the soil around the first of June, while growers in Anchorage can put them in the soil sooner, around the first half of May. Check with your local nursery to see what the optimal planting time is to avoid the frost in your area.

Autoflowering seeds are a good choice for those who don’t want to worry about a 12-hour photo period. These seeds have been bred to automatically flower after a certain period of time, according to Schlossberg.

“The autoflowers automatically trigger at about 30 days and have a life cycle of 90 days,” he said. “So the plant will grow from a seed, spend four weeks developing a vegetative plant structure, and then automatically initiate flowering development after about 30 days.”

However, autoflowers are not identical in the way that clones are.

“You will see that some plants stay small, some plants get big, some plants get really big and they’ll never flower at all,” Emers said. That’s because you can’t clone an autoflower and have to start it from a seed every time. Since each seed is its own genetic package, each plant will be somewhat different than its brother or sister. You might even get a plant without any buds at all.

Don’t be afraid that the seeds won’t germinate — start off with a large enough pot for the amount of seeds you’re planting, because, 99 percent of the time, Emers said, the seed will germinate.

“You don’t put it in paper towels, don’t try to do anything silly like that. Just put it into the ground, trust that it’s going to come up, and in about three to four days it’ll start to germinate,” he said.

Clones and autoflowers share some similar traits. For example, marijuana plants don’t like to be transplanted, since they have a taproot that you don’t want to disturb much.

“If you don’t have any intention of putting it directly into the ground — and a lot of people won’t want to, they just want to put it on their porch or keep it in the container — plant it right into the container that you want to see it in and you’re good to go,” Emers said.

Despite being a generally hardy plant that can survive frosts and a range of soil conditions, marijuana plants are susceptible to bugs and mold.

“When the air gets a lot more humid, when the rains start coming, the marijuana buds are really tight and they’re a perfect environment for mold to grow,” Emers said. “You can do all sorts of things to combat mold and you can buy fungicide and stuff like that, but if you want to do it organically, you’re going to have to pretty much avoid all that.”

Different climates around the state have different weather patterns. For example, Fairbanks has a rainy season that usually starts in August. There, growers might consider starting the clones or seeds indoors early enough to be able to harvest them by the end of July.

Where you can get your hands on some clones or autoflowers? Clones are easier to come by than autoflowers, but everything depends on your location. Retailers like Pakalolo Supply Co., Green Degree, Great Northern Cannabis, The Frost Farms and others carry clones, but gardeners in more remote locations might have difficulty finding a store that carries exactly what they’re looking for.

If you do decide to grow with clones, make sure you’re getting the best clone you can buy. Rachel Lake with Green Degree in Wasilla notes that you should check the health of the clone you’re planning to purchase.

Some trial and error is required.

“You have to do a lot of experimentation with your strains and find out what strains will mature during our summers, what strains are less susceptible to mold, what strains give you bigger buds, and what strains just put on too much vegetative growth and don’t give you enough bud,” Emers said. “Just like any kind of gardening, you have to experiment and see what’s right for you.”

If you’ve decided that you want to experiment and see if you have a green thumb for growing cannabis, here’s what you should do, according to Emers:

“Order some plants, order some seeds, trust that they’ll germinate whether you grow it in the container or directly in the ground, give them enough space, give them enough fertilizer,” he said. “You don’t want to use a heavy nitrogen fertilizer because it will put too much energy into vegetative growth and not enough of the flower growth. Use a balanced fertilizer.

“It isn’t as hard as people think, but you’re going to have to do some experimentation. Your biggest expense will be seeds.”